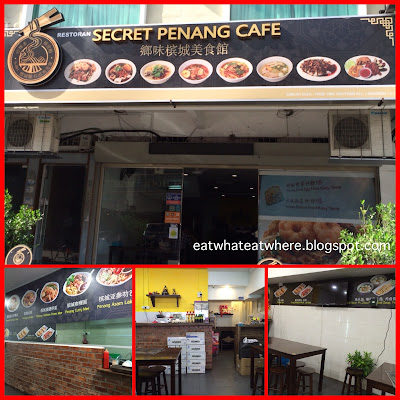 So, if you're curious about Secret Penang Cafe @ Taman Segar, Cheras, then come on over to check out just how authentic the food is. 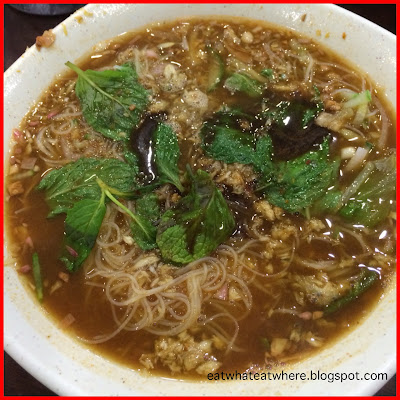 Let's start with our first order, the Penang Assam Laksa @ RM7.50 (for small, RM9.50 for big).  Unfortunately, they don't serve it with "lai fun" (thick rice noodles) which is synonymous with assam laksa.  Instead, it was bihun (rice vermicelli)...that's epic fail in my eyes already! >.<  Filled with sliced onions, cucumber, bunga kantan (torch ginger flower), minced kembong (mackerel) and topped with prawn paste and fresh mint, the assam broth had no complexity of flavour whatsoever.  This has to go down as one of the worse assam laksa I've eaten, so stay clear of this one. 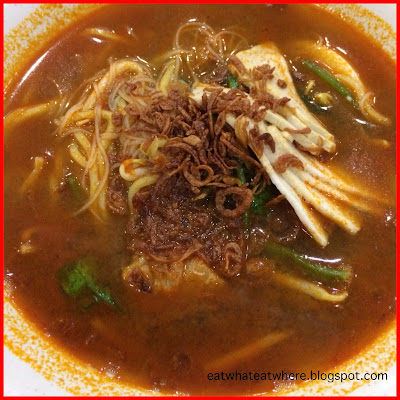 As for the Penang Hokkien (or Prawn) Mee (+ Bihun) @ RM7.50 (for small, RM9.50 for big), I was pleased to see it generously filled with the prawn mee soup unlike some places where they can be quite stingy with the broth. 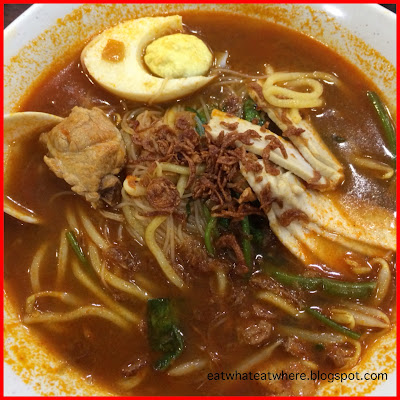 Digging in, I was sufficiently impressed to find a fair amount of sliced lean pork, half a hard-boiled egg, a piece of tender pork rib and a good sprinkling of fried shallots.  What I wasn't impressed with was the smallish prawns and only a few at that.  This was supposed to be prawn mee...so where were the prawns?! O_o  It was just a passable prawn mee as the prawn soup base didn't have the depth of flavour (but at least edible compared to the earlier assam laksa). 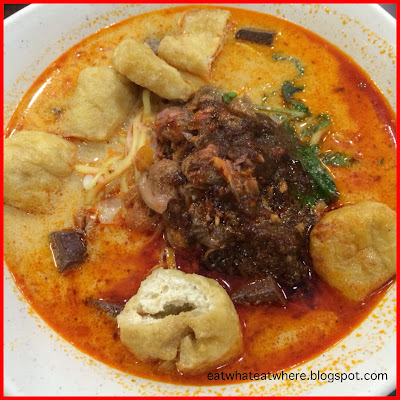 The Penang White Curry Mee (+ Bihun) @ RM7.50 (for small, RM9.50 for big) with squid, pig blood cubes, tofu puffs and smallish cockles had an enjoyable broth, slightly sweetish but a tad light.  Still, the most decent of the three soup-type noodles I tried here. 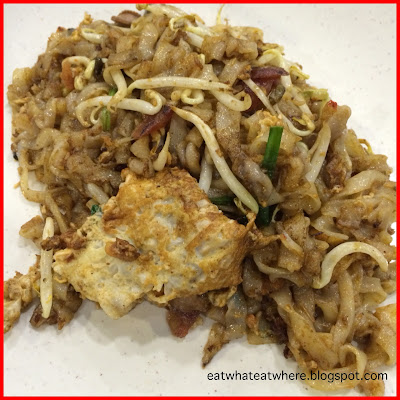 There were two dishes on the menu that had the word 'famous' attached to it and one of them was the Penang Famous Fried Kuey Teow (with Duck Egg) @ RM9.50 (for small, RM11.50 for big), so we had to order that, of course, plus the option with duck egg isn't always easily available in KL. 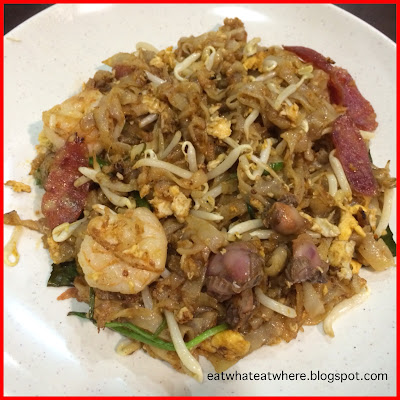 This turned out to be my son's favourite dish here.  When I had it another time, I got "see hum" (blood cockles) that were a bit larger in size...yay! ^.^ 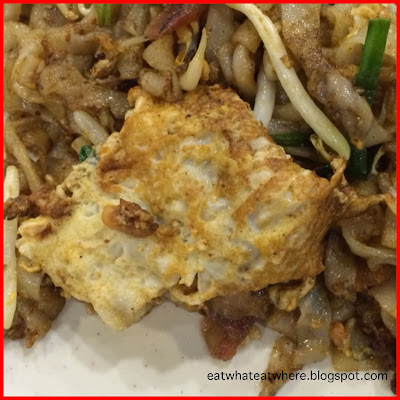 The noodles, fried with prawns, "lap cheong" (Chinese dried sausage), crunchy fat bean sprouts and chives, had a hint of "wok hei" and the duck egg offered a richer taste to the fried noodles.  There's also the usual version with chicken egg @ RM8.50 (for small, RM10.50 for big). 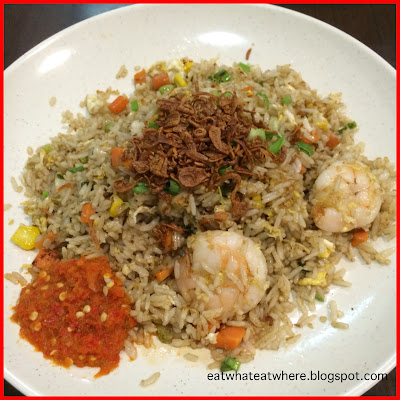 The other dish on the menu which had the word 'famous' attached to it that I just had to try was the Penang Famous Fried Rice @ RM8.50 (for small, RM10.50 for big).  The wok hei in this one was even better and, with two large prawns and lots of crispy fried shallots, the fried rice was fragrant and delicious.  Penang is not even famous for fried rice...and with all their more famous dishes here, this somehow ended up as the best thing in my books. ^o^ 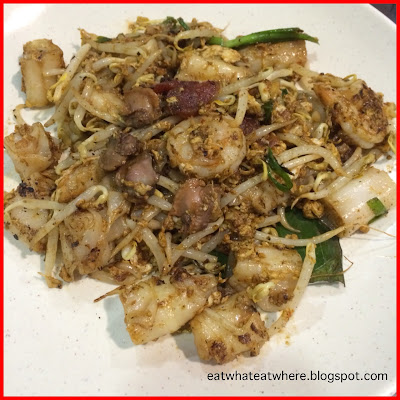 The Penang Fried Chee Cheong Fun @ RM8.50 (for small, RM10.50 for big) is almost similar to the fried kuey teow, fried in exactly the same way and with the exact ingredients...and by that, I mean exactly, right down to the see hum...the only exception being that chee cheong fun rolls were used instead of kuey teow.  If there's one thing I thought could be better across all three dishes would be the quality of the lap cheong as it wasn't fragrant enough. 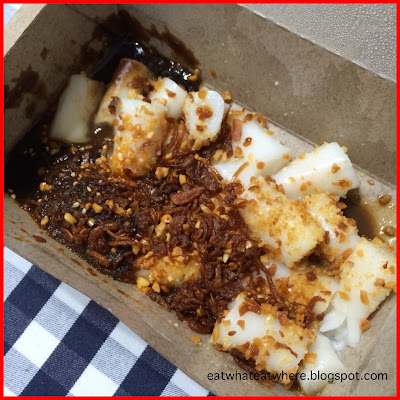 If you want to try the Penang Shrimp Paste Chee Cheong Fun @ RM5.50 (for small, RM7 for big), don't "tapau" (pack) it home coz, to my horror, the sauces weren't packed separately but poured all over the chee cheong fun when I opened it at home! O_o  It looks like they have yet to learn the proper way to "tapau" this. 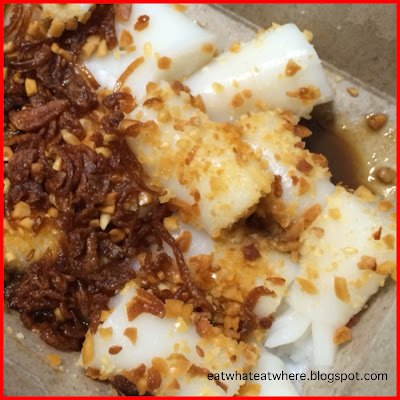 That aside, it did have a fairly good balance of flavours of salty shrimp paste, spicy sambal, crunchy fried shallots, fragrant sesame seeds and crushed peanuts (not sure why the crushed peanuts were there though)...and the rolls were soft but somehow didn't feel as thin (or translucent) as the earlier fried ones though.  The one difference (compared to some others I've had) is that this chee cheong fun is served steaming hot...and in rolls.  For this Penang-style chee cheong fun, it didn't quite match the terrific one in O & S Restaurant. 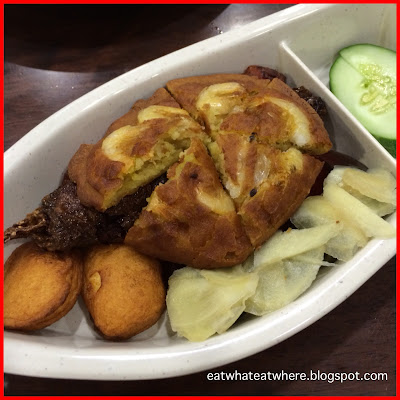 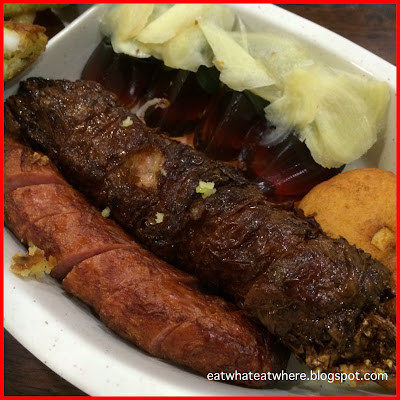 Let me clear away the shrimp cake for a better look at what's underneath.  Didn't think much of the shrimp cake and cheese tofu but the loh bak was acceptable and the century egg (with vinegared ginger) was of course a love-it or hate-it kind of thing (I'm the former). 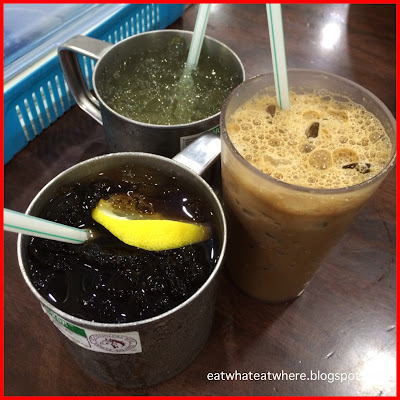 The drinks of Nutmeg Juice (Cold) @ RM3.40, Pat Poh (or Eight Treasures) Herbal Tea with Lemon @ RM2.90 and Cold White Coffee & Cold Milk Tea @ RM3 didn't impress as both the nutmeg and "pat poh" (concoction of eight herbs) flavours were so mild, I couldn't taste anything other than the sweetness.

I don't know what's the 'secret' in the name...but I do know that the 'Penang' part of it wasn't met in some of their offerings.  I didn't like any of their soup based noodles, like prawn mee, assam laksa or curry mee, nor their drinks.

Their fried rice, char kuey teow and chee cheong fun fared much better, so these would be the more worthwhile options here, if you ask me.