Ever since my last couple of forays into this area...to places like Skive, Frozen by Ken and Eatomo, this Jalan Telawi area has grown on me.  It's a rather happening street I have to say!  Every where you turn, you're bound to bump into a restaurant, cafe, bar or dessert parlour. 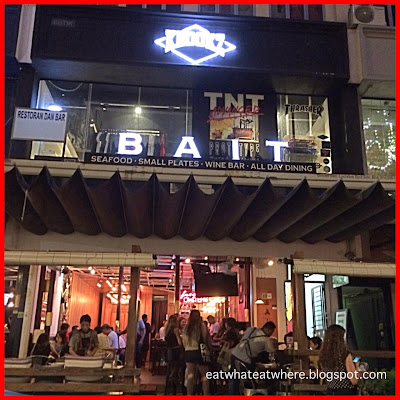 Most are within walking distance from one another and from Bangsar Village where one can easily find parking.  And that's exactly what we did, park at Bangsar Village and walked out of the shopping mall into Bait @ Bangsar that's just across the street. 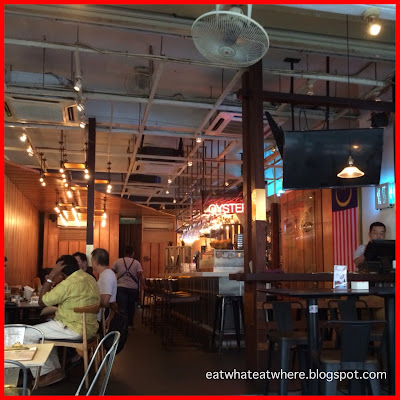 We were shown indoors into the air-conditioned area but the seats opposite the bar were already reserved. So we were taken towards the back of the bar where more seats are available.  Unfortunately, I didn't quite like that area as the tables were placed too close for comfort plus our table also happened to be directly under the blowing air-conditioner.  In the end, we decided to sit at the alfresco area.  There were some fans but it wasn't as comfortable and cooling as Eatomo though but luckily it wasn't too humid that evening. 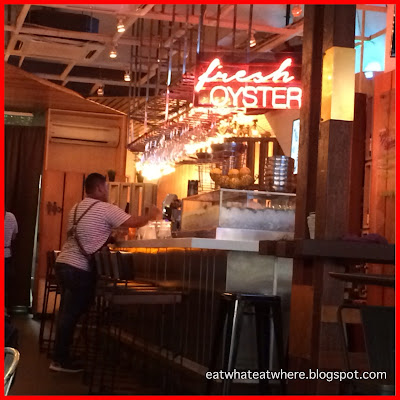 Touted as one of KL's original seafood and oyster bar, they've been around for almost 6 years.  They run on a fairly small menu of just 2 choices for soups, 4 choices of homemade pastas, 8 selections for mains and 3 desserts but have a wide variety of small plates (at least 14 options).  I've always felt that a limited menu is not a disadvantage as I'm a believer in doing a few things well then doing a lot of things average.  The good variety of small plates are probably meant for those who prioritise drinks first and food second.  I suppose one can also make a full meal out of three small plates! ;P 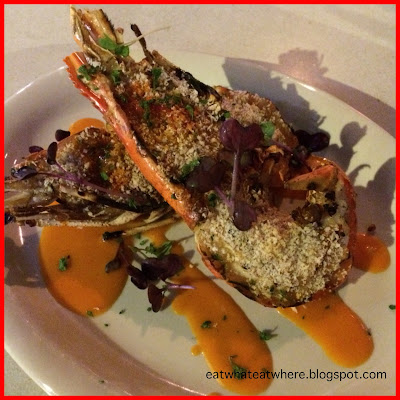 That was the route I was going to take until I was told one of my three choices were not available.  I finally plucked up enough courage and was hoping to try bone marrow for the first time but, alas, it was not meant to be!  So, I changed my mind and went with a starter of Flambeed King Prawn @ RM29....and no, you don't get to see any flambe action at the table unfortunately. 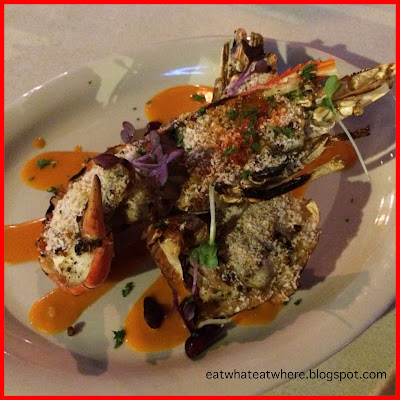 The king prawn lived up to its name, it was huge...almost like a mini lobster! ;)  It came covered with crispy crab roe crumbs (which tasted like normal breadcrumbs to me) with a spicy saffron cream butter sauce. The saffron sauce was absolutely delicious and not spicy at all...I wanted more sauce actually!  There was a mention of cognac in the menu, so I'm guessing that was used to flambe the prawns?  No worries though, you can't really taste the cognac. 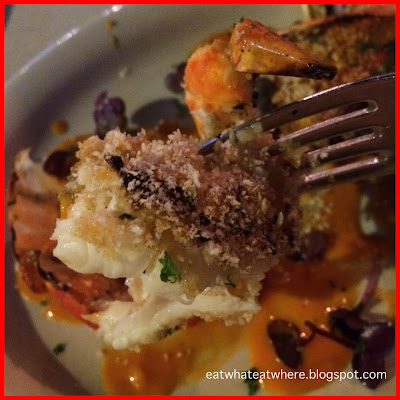 The super fresh king prawn had nice char marks on it and the tail meat was super firm to the bite.  The prawn head was full of that yummy roe too. ^_^  If I had one small complaint, it'd be the long wait time I had to endure for this starter to arrive (somewhere between 20 - 30 minutes).  Luckily, the wait was worth it. 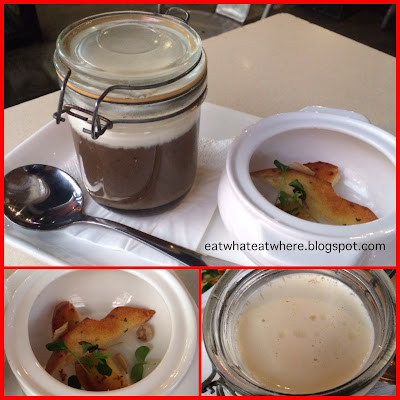 Our other starter was the Porcini Mushroom Soup @ RM25 served with parmesan cheese espuma and garlic cheese stick.  The soup was presented in a rather unique way...in a jar that can be emptied into the small bowl provided with bread, mushroom bits and micro greens. 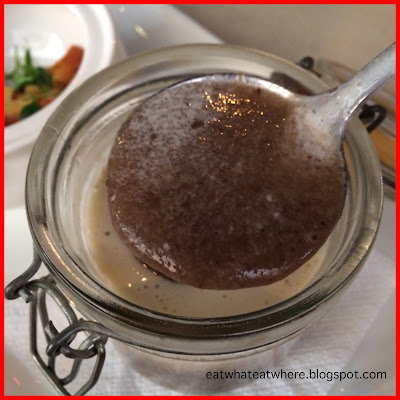 One scoop of the soup and you know you're in for a treat with such an intense colour and flavour that porcini mushrooms are known to impart.  This may look like some of the fresh mushroom soups you've had before (which can be made with either shiitake, portobello, Swiss brown or button mushrooms or a combination of any of these) but this one tasted loads better.  And if you think there's too much cream...there isn't. 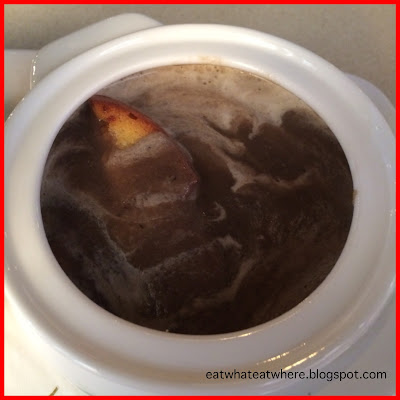 The soup was so thick, creamy and faultlessly delicious with a strong nutty and earthy flavour.  This has to be way up there with some of the other good mushroom soups I've had...so rich in flavour...so, so good! ^.^

You can judge just how long I waited for my flambeed king prawn from the photos of the mushroom soup which was the first to arrive when there was still light! >.<  All other photos that followed, you can see that the evening has turned into night. 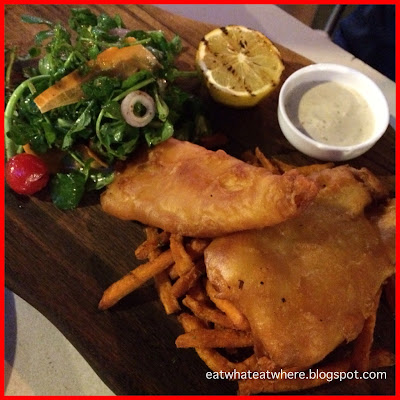 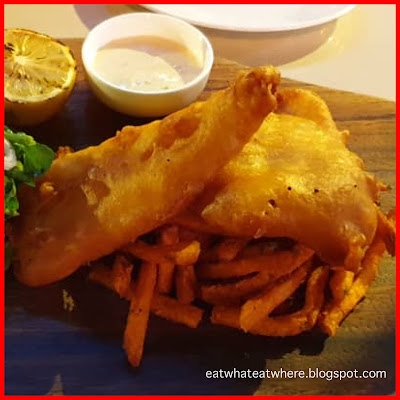 The sweet potato fries were crisp on the outside and fluffy within...a step up from the usual accompaniment of French fries. 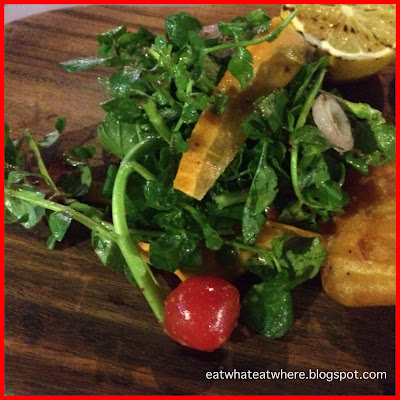 Loved the simple salad of fresh watercress with onions and cherry tomatoes lightly tossed in a simple vinaigrette (of probably oil + vinegar).  I'd take watercress anytime over the common mixed salad leaves that we get at most places. 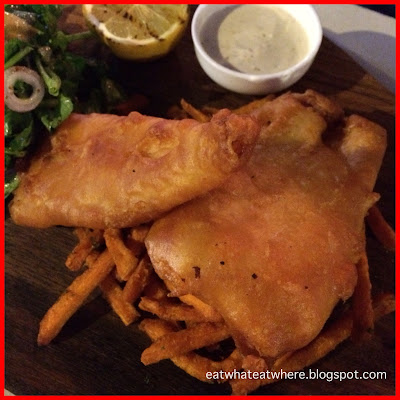 As for the star of the plate...the sizeable pieces of blue cod fish fillets, with its soft and flaky texture and nice, crisp, not-too-thick batter, were great and exceptionally delish with the remoulade dip (which is a mayo-based sauce closely resembling that of tartar sauce but with a couple more ingredients). 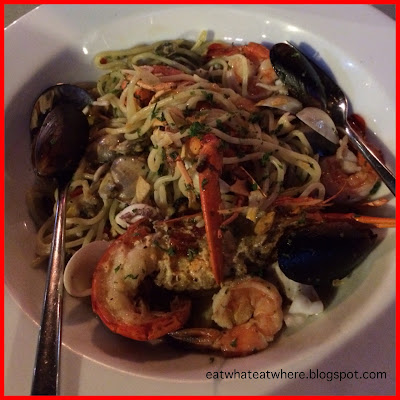 For my main, I chose one of their homemade pasta of Seafood Aglio-Olio @ RM49 featuring spaghetti with impeccable Australian yabbies and various seafood tossed with garlic confit, chillies, Italian parsley and extra virgin olive oil. 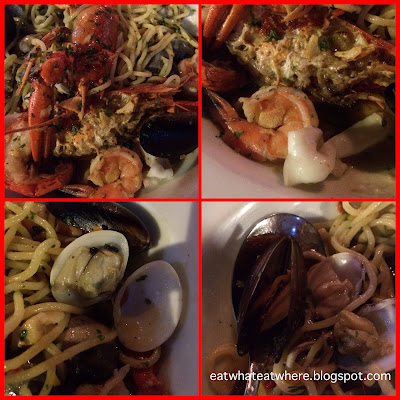 The seafood galore begins with a fairly huge and meaty Australian yabby, properly deveined good-sized prawns (three of them), mussels (three as well), plenty of juicy clams and finishes with some very tender squid. Mussels are my least favourite seafood but these ones I surprisingly enjoyed...must be the freshness factor. ;P 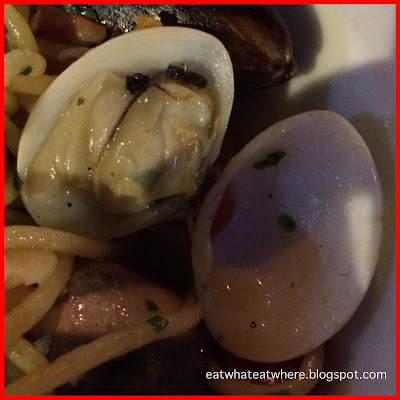 One thing I'd like to highlight among all the seafood are the clams.  Most of the clams I've ever eaten, they're usually smallish and don't seem to fill up the clam shell but these ones...just look how the clam meat covers almost the entire clam shell! ^o^ 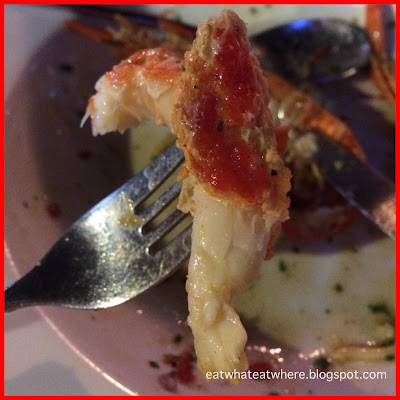 The tail meat of the yabby was not only meaty and firm, it was also full of that rich, umami roe that I love, love, love.  And the yumminess continued to the head of the yabby with more roe and 'brain matter'...and you'd want to suck all the brain juices out, I tell ya! :P  If I was eating at home without the need to behave, I'd suck the heck out of that yabby's brain...wuahahahaha! :D  Those who don't suck the heads don't know what they're missing as the flavour is all in the head. 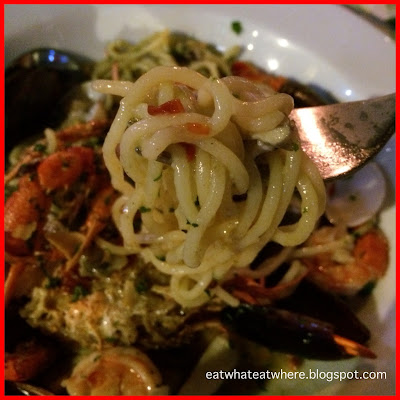 The freshly kitchen-made spaghetti was also very different from commercially produced dried pasta.  The ease of picking up the uneven handmade strands with your fork is evident unlike the slippery dried pasta which would slip off as you try to twirl it around your fork! >.<  Taste and texture-wise, the perfectly cooked fresh pasta was so much better than their dried 'cousins'.  I can't remember if I've had fresh pasta before but this one left an impression.  Now I can truly appreciate why freshly made pasta is the way to go. 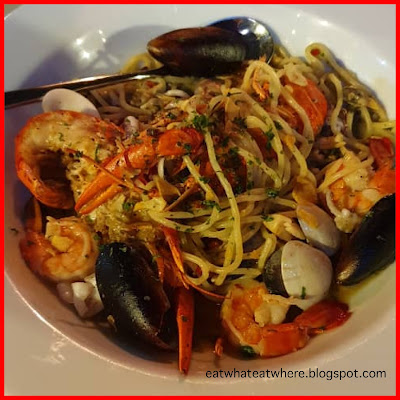 Most aglio-olio pasta I've had in the past is usually cooked with dried chilli flakes, minced garlic and olive oil. This one was not.  The chilli flakes were not of the dried kind...it had a fresh taste to it (maybe they were chilli peppers preserved in oil).  For fellow members of the garlic fan club, note that they're not shy with garlic here, you get whole or half cloves (not minced garlic) tossed with the pasta but you don't get the harshness and pungency of raw and undercooked garlic coz they're confit garlic cloves (that have been steeped in oil which brings out a mellowed taste in them).  I was swallowing the garlic cloves whole...and loving it!  When I was eating the pasta, I actually felt like the aglio-olio had a sauce instead of just the usual oily feel I usually get in other aglio-olios.

Overall, this dish had rich crustacean undertones with a lovely sauce.  This is by far my favourite aglio-olio todate...it's so good on every level! ^o^  All four homemade pasta dishes here cost RM49 - RM55 and paying around RM50 (twice the usual price to some) may be deemed expensive but give me freshly made pasta with irreproachably fresh premium seafood and I'll gladly pay the price. 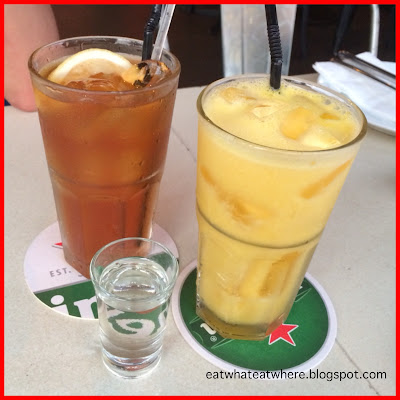 If you could have just one dish here...make it the Seafood Aglio-Olio (for now)...or just any dish with clams in it.  I hope to be back to try more of their dishes...and I'm sure I'll find more to like.