I had already bookmarked Emily's Steakhouse @ Jalan Sultan Ismail even before it opened its doors for business.  Emily have been serving fine steaks in Derby, UK since 2007.  She grew up in Penang and worked in numerous restaurants in London before opening her own steakhouse with her husband/chef. 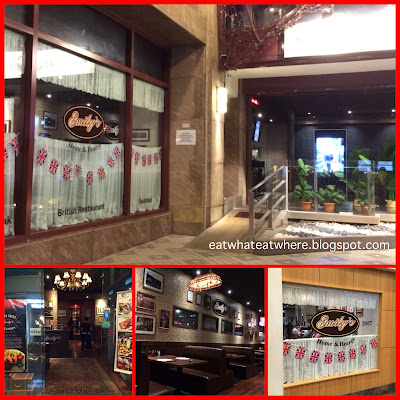 Emily's steakhouse in KL (opened in June this year) is her second branch after her first Penang outlet (which was opened earlier in March with her younger brother).  My visit here was a little over two months after they opened and we managed to get a table on a weekend without any prior reservations. 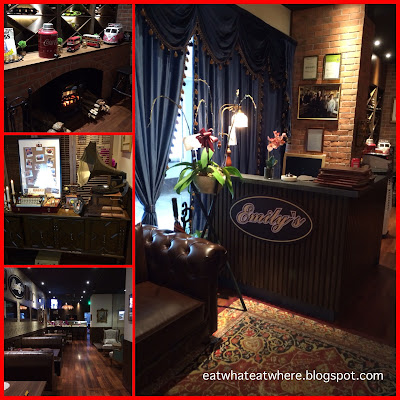 The decor is typical of a steakhouse with its warm tones of exposed brick walls, timber flooring, dark brown tables & leather sofas and soft lighting, there's even a fireplace. 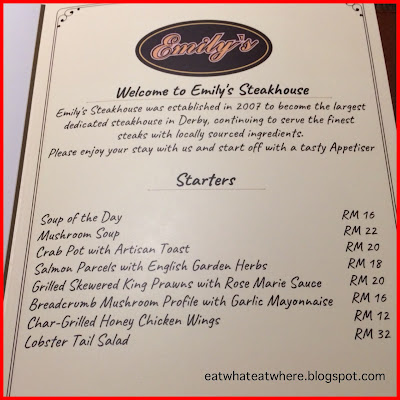 For starters and side orders, they have a small selection for you to pick from that includes soups, mushrooms, salmon parcels, grilled king prawns, crab pot, lobster tail salad, onion rings and honey chicken wings. 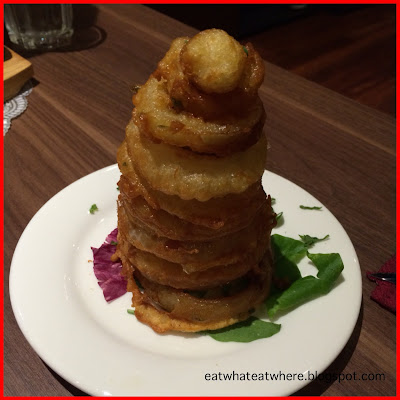 We ordered the Homemade Onion Rings @ RM12 for sharing.  The onion ring tower ended up to be the last dish to be served.  The onions were sweet and the batter relatively crispy but the oil seems to have been absorbed by the onion rings. 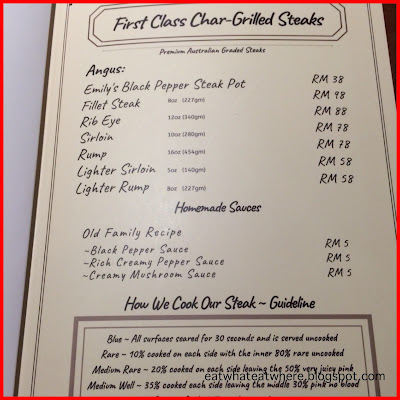 Emily's Steakhouse is, of course, well-known for their steaks....and that was precisely what we came for. They have a cut to suit every taste bud (ribeye, fillet, sirloin & rump)...a size to suit every stomach (from as low as 140g to a substantial 454g)...and a price to suit every budget (starting from an affordable RM58 to as high as RM268 for wagyu). 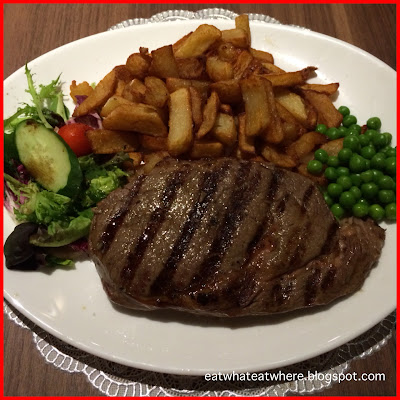 I chose Angus Ribeye @ RM88 for a sizeable piece at 340g with a generous serving of hand-cut chips (they don't serve fries here, only chips), green peas and a side salad made up of mixed salad leaves, cucumber and tomatoes.  It was rather obvious that the chips were hand-cut seeing that they were all of different sizes...and let me tell you they were plentiful on the plate and delicious too, crisp on the outside, soft and fluffy inside. 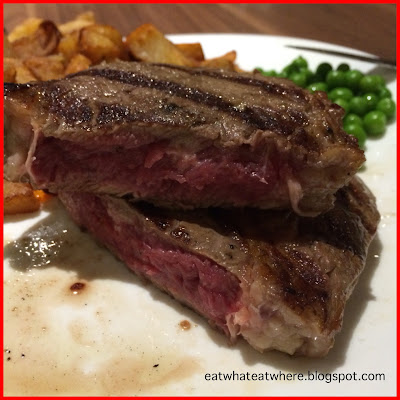 Here, you can request for your steaks to be done from the not commonly offered 'blue' all the way to 'well done'.  Rare is already too rare for me let alone blue! O_o  I had mine cooked to medium rare as usual and it was beautifully executed to such.  It was lusciously tender and had that nice charred flavour from being grilled over a charcoal stove though I can't really say the meat itself was brimming with flavour but certainly decently flavoured for the price paid. ^.^ 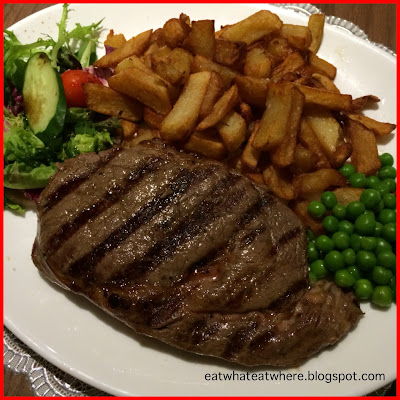 I read somewhere that their steaks are not seasoned before cooking but in a recent article in the Star papers, Emily states that they're lightly seasoned (and I can confirm that I did see some light specks of black pepper).  I suppose that's why you find shakers of sea salt and black pepper on the table for diners to season their steaks to their liking.  For those who like more robust flavours, it'll come off quite bland, so do take note of that and make sure you season your steaks before eating.  There's also vinegar on the table to go with your chips (apparently some people like it that way).  Well, it's a common condiment in the UK when it comes to fish and chips.

You can choose to eat your steak naked just as it is to get that lovely smoky flavour but, because it's so lightly seasoned, it's great to have some sauce with it.  You have a choice between their homemade black pepper sauce, rich creamy pepper sauce or creamy mushroom sauce.  The really surprising thing for me though was that we had to pay for the sauce separately (I think a choice of sauce should be given for free!). 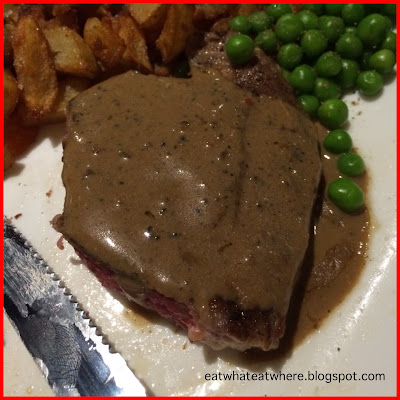 I went with the rich creamy pepper sauce (RM5) which turned out to be an excellent choice.  It had the taste of black pepper (but not as peppery hot) with a much creamier consistency.  The sauce only arrived when I reminded them about it.  So, when it came, I dived straight in as I was staring at my steak for a while (so, that's the reason why there is no photo of the sauce in the pitcher).  I loved the sauce so much that I dipped the fries into what was left of the sauce.  What's shown above is only half a steak (coz I shared it with my spouse). ^_* 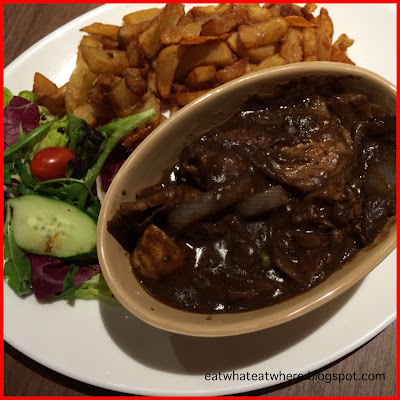 That way I can also partake in half of my spouse's order of Emily's Black Pepper Steak Pot @ RM38, a dish made up of beef sliced cooked with onions, fresh button mushrooms and peas doused in their signature homemade black pepper sauce. 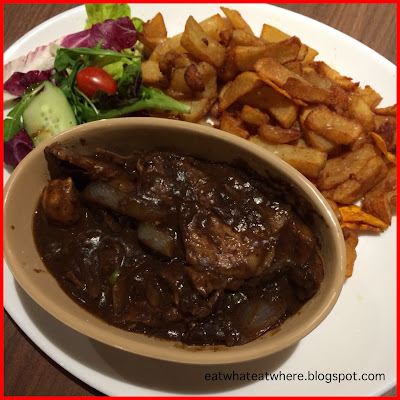 This turned out better than I expected with tender beef slices, soft onions, some chunks of mushrooms and a bit of peas.  The black pepper sauce was very good, not overly peppery hot like some I've had.  There's a reason why their signature sauce is such a popular choice with diners.  But for me, I prefer the creamy pepper sauce over the black pepper sauce. 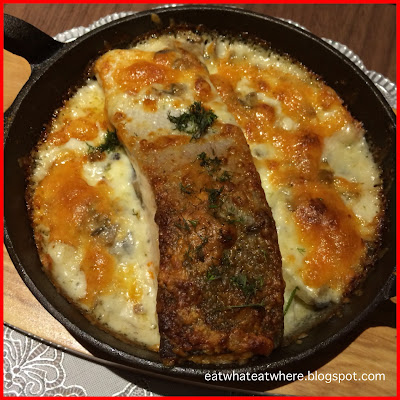 Our final main was the Grilled Salmon with Gratin Potato @ RM68 featuring a piece of grilled salmon sitting on a bed of thinly sliced potatoes with cheese and cream. 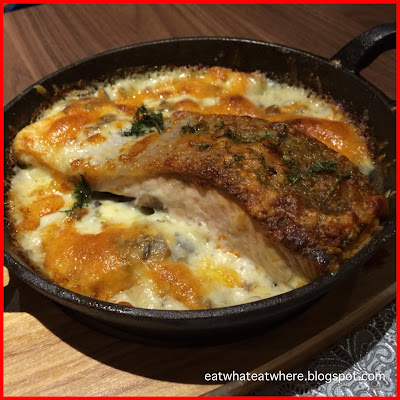 The salmon stayed moist and was well grilled with a crispy skin.  This was a rather hearty dish because of the potatoes, cream and cheese.  Order this only if you enjoy something creamy and cheesy. 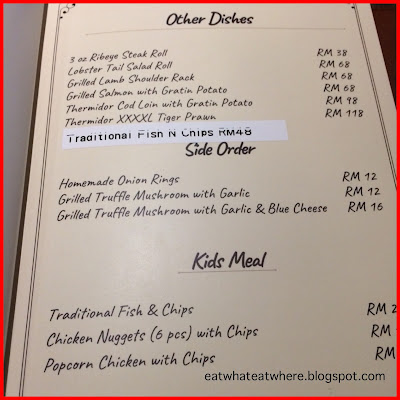 Besides bovine pleasures, the restaurant also offers lamb, fish and prawn dishes in case there are non-beef enthusiasts. My Fresh Watermelon Juice @ RM8.  Complimentary water is also served.  If there was one very mini complaint, it'd be the plastic table doilies used as table mats as I could see that some of them were stained. That reminded me of some of my past experiences of being confronted with soiled paper mats which some restaurants try to reuse and it's rather off-putting.  If you don't intend to dispose of them after each use, then it'd be better to not have it at all.  I'll be more than happy if you just serve me my food on a clean table.

As they choose not to season or lightly season their meat, it didn't appeal as much to my spouse (as it did me) since he's someone who likes the robust flavour of a well-seasoned steak (he gave the salt grinder a good workout).  Luckily, they had good sauces to make you not notice (as much) the under-seasoned meat.  I think you can only get away with not seasoning your meat if it's of exceptional quality (like wagyu) where you can really taste the flavour in the meat itself.  But then a good seasoning on a steak do tend to give it that crusty, savoury layer on the outside of the meat that I truly adore.

That said, the dishes we had were definitely hearty and good value.  For a RM88 piece of ribeye, there are certainly no complaints from me about the taste and value.  I would return for the steaks. ^o^

If you're after a family-friendly steakhouse in the heart of town, Emily's might just be the place you're looking for.