This famous and renowned French bakery, that originated from Paris since 1889, Paul Bakery @ Pavilion, has opened its doors to Malaysians since the middle of the year. 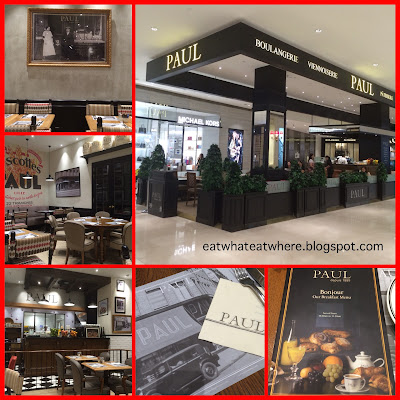 With mixed reviews on the food (mostly unflattering) and pastries, I wasn't overly eager to visit.  I thought I'd give it a go one morning when I was at the mall to get something. 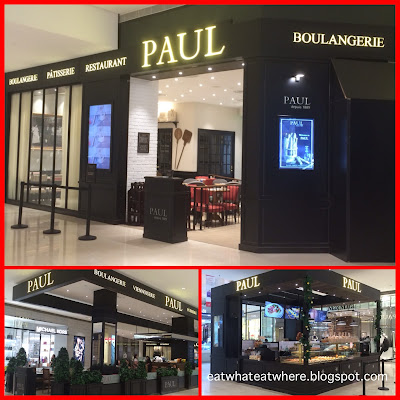 Since Paul Bakery is all about the bread and pastries, I decided to choose a simple and light breakfast of Petit dejeuner Parisien @ RM15.80 which consists of a Croissant or Pain au chocolat or Breakfast bread of your choice. 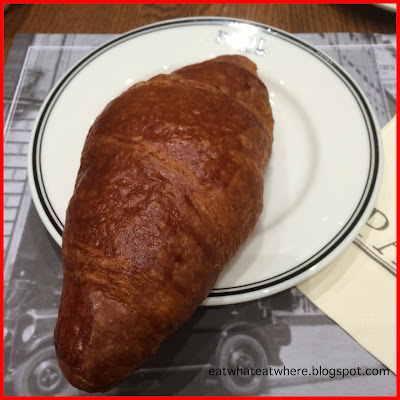 This was how the croissant looked when it landed on my table! O_o  They're obviously not very concerned with how their food is presented. 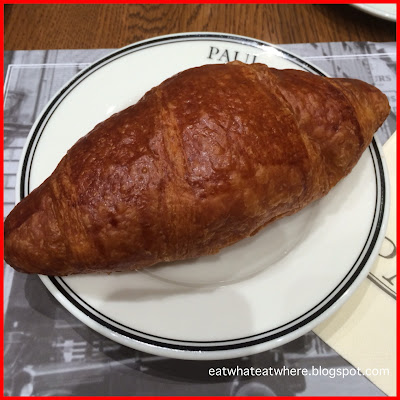 Let me readjust that for you.  Right off the bat, I noticed that the folds of the croissant didn't quite look like the usual ones I've had before.  The roll was soft and it felt (and tasted) like it was yesterday's croissant! O_o It wasn't crisp.  It wasn't flaky.  It wasn't buttery.  It just wasn't...anything.  I obviously had higher expectations of a croissant from a French bakery! :(  The croissant from Croisserie Artisan Bakery and Ra.Ft Cafe beats this one hands down. 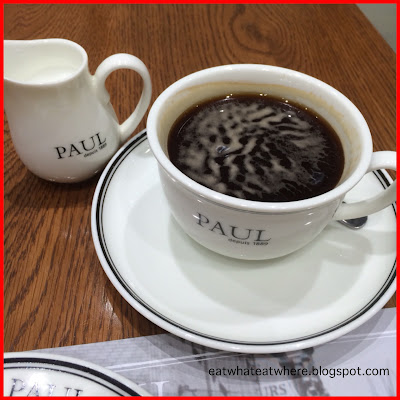 It comes with a Grand Cafe (coffee) which you can have either black or with hot milk. 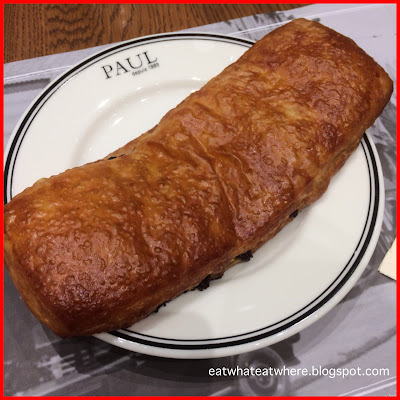 I also got myself another pastry, the Gourmandise @ RM8.80, described as a rich pastry with creme patisserie (pastry cream) and chocolate chip drops. 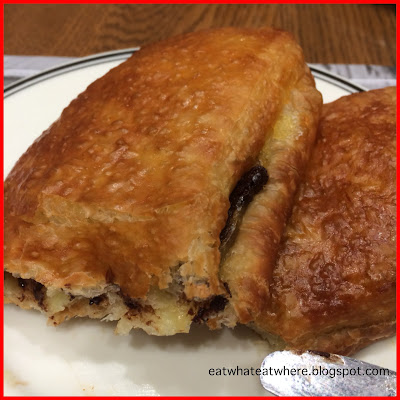 This was just like the earlier croissant except for the tiny amounts of creme patisserie and chocolate inside it.  Again, it didn't impress.

When I came, my intention was to try the lovely eye-catching tarts I saw online but I was told that they were only available from 11.30 am (by the first lady server who took my breakfast order).  As I was seated inside the restaurant, which was the furthest from the take-away counter, I asked the second lady (who served me the Gourmandise) and she said the take-away counter was opened already.  I walked there after finishing my breakfast but saw only breads, croissants and a few pastries....no tarts!  I asked the third lady (at the take-away counter) when the tarts will be ready and she said 12 noon.  Same question...three different answers! @_@ 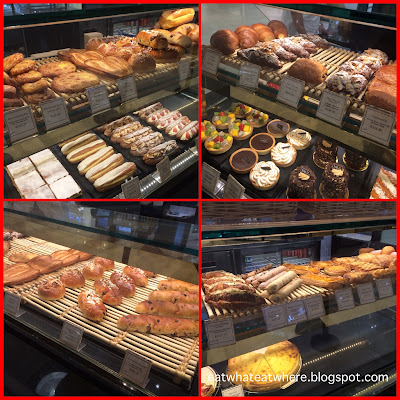 So, I went to shop the things I wanted to get before returning to the take-away counter around 11.40 am and saw that the tarts were finally out. 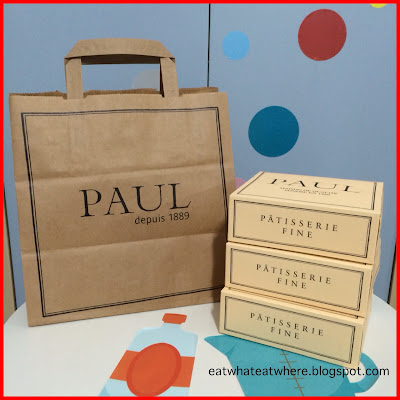 I got myself one mille-feuille, one eclair and one tartelette for take-away...and they were all nicely packed in a separate box each. 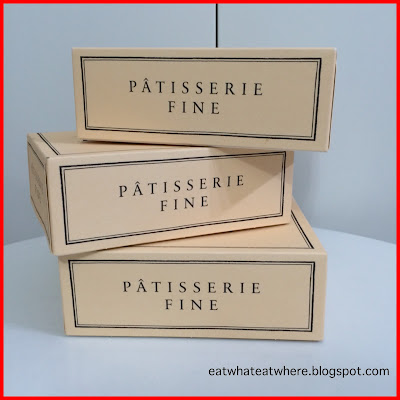 Well, they're 'fine' patisserie after all....and they come with a 'fine' price, so they should come in fine packaging too, don't you think? ;) 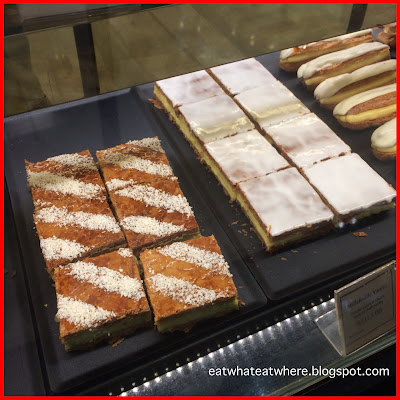 There were a few types of mille-feuille available that day.....fraise (strawberry), chocolat, vanille (vanilla) & pandan. 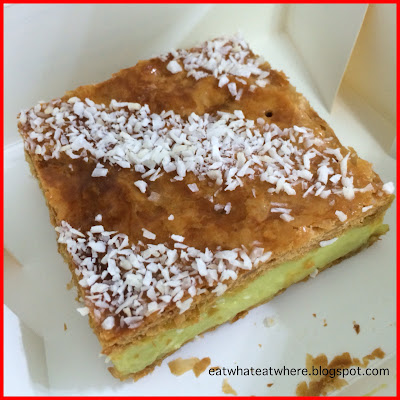 I got the Pandan Mille-Feuille @ RM13, a new flavour according to the girl manning the counter.  I thoroughly enjoyed the two layers of immensely crispy puff pastry sandwiching the pandan-flavoured custard cream in between. 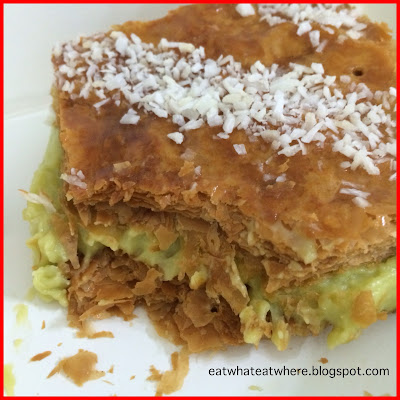 In fact, the puff pastry stayed crispy even after 4 hours (when I ate the balance half).  The pandan pastry cream on the other hand....oh-em-gee...was insanely sweet! >.< 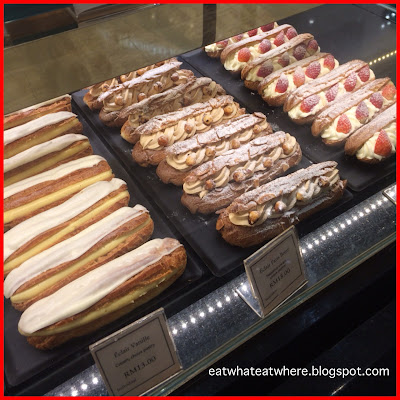 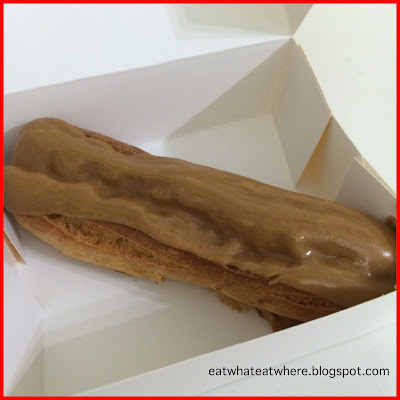 I chose the Eclair Cafe @ RM13.  The choux pastry filled with coffee-flavoured cream was light and crisp. 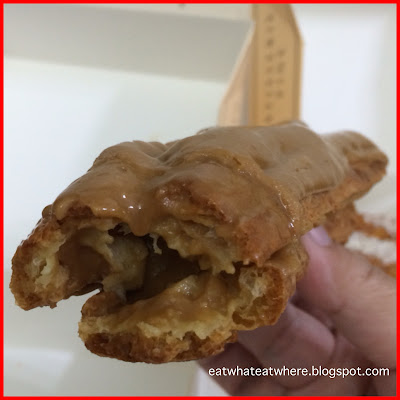 You know what, if not for the double overdose of sweetness of coffee-flavoured pastry cream as well as coffee-flavoured icing on top, this could have been a very good eclair.  Haiz, if only they had dialled down the sweetness! >_< 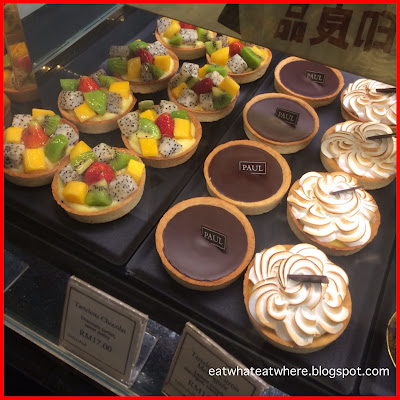 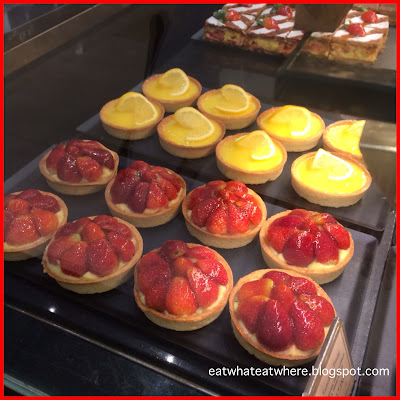 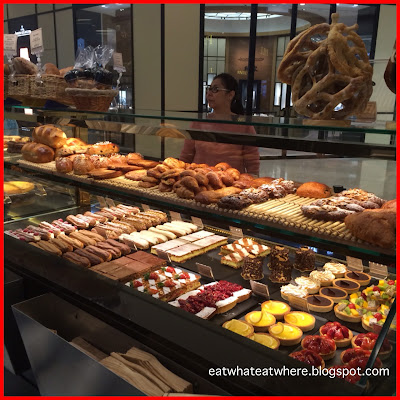 I initially wanted the multi-fruits tartlet with sweet pastry, custard cream and mixed fruits of kiwifruit, mango, dragon fruit and strawberry but was frightened off by the shiny sugary glaze on top of the fruits...and the price (RM17)!  The price for the fraise tart was even more frightening (RM18).  I don't think I can bring myself to pay more than RM15 for just a pastry...it's just too expensive. 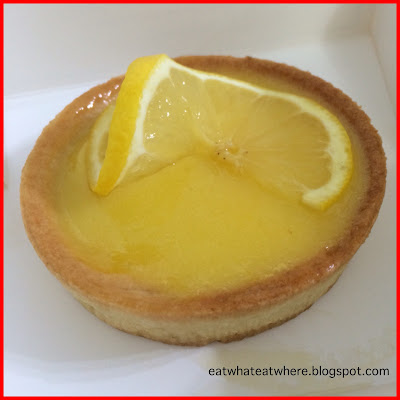 So, I settled for the Tartelette Citron @ RM15.  The lemon cream had refreshing zesty flavours, of course. This was alright but I'd rather eat those from Croisserie Artisan Bakery and La Casa anytime. 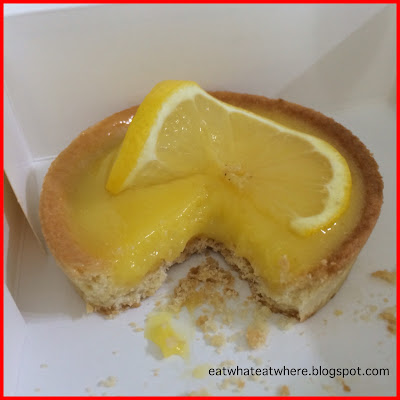 Although this was the least sweet pastry of the three I got, somehow I still felt that I could taste some sweetness in between the tanginess (if that makes any sense).  Maybe my taste buds were already compromised from an overload of sweetness. 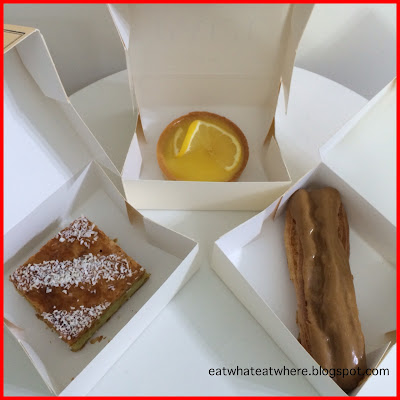 I wonder if the French would take their pastries so sweet or these were tweaked to cater to the majority of Malaysian palates who like things sweet (they seriously need to relook the sweetness issue).

Bring your sweet tooth (and, by that, I really mean your sweet tooth) if you want to enjoy these baked goods.  Make sure you order yourself a black coffee...and make sure it's bitter (without adding sugar) to cut through all that sweetness, otherwise it'll send you straight to diabetic heaven! ;P

In the end, it proved too cloyingly sweet for me to have any remote chance of enjoying these sweet goodies. I'm afraid once was quite enough! >_<  I'd rather go for the famous Japanese pastry, Chateraise Patisserie, instead. 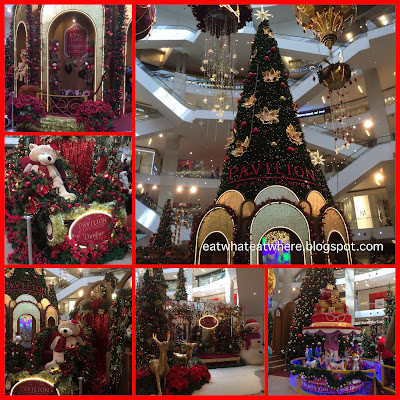 Christmas Is In The Air at Pavilion! 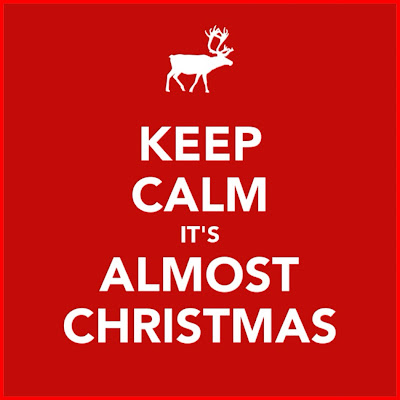