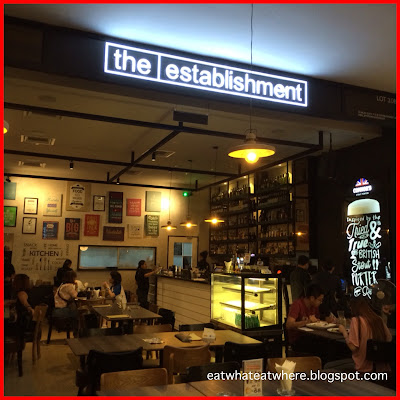 It's a restaurant and bar serving western and local fusion cuisine with lots of bar snacks/finger food that you can enjoy with cocktails and beer. 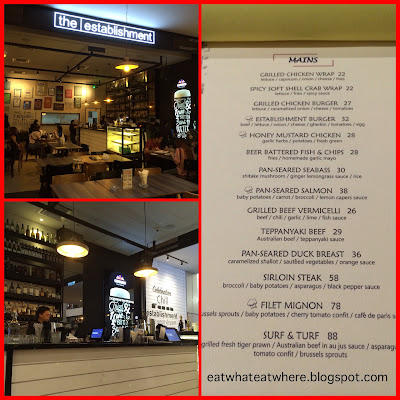 Located at Connection Level 3, the place is pretty small with less than 10 tables inside the restaurant but more tables at the al fresco dining area (an ideal spot for people watching). 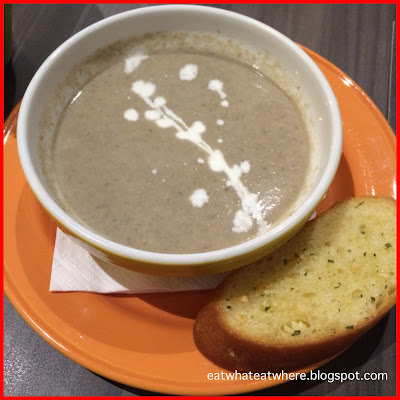 We started with the Homemade Cream of Mushroom @ RM15 served with a slice of crisp garlic baguette studded with fresh garlic and herbs.  No complaints on the just right creamy consistency with loads of mushroom flavour. 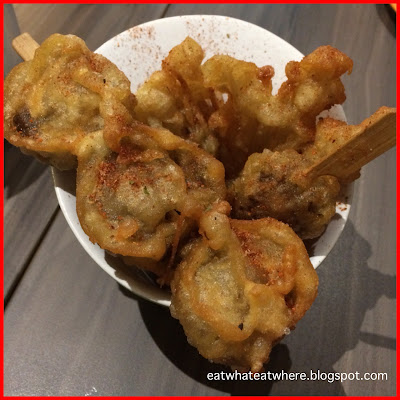 We also ordered snacks of Fried Mixed Mushrooms @ RM17 for sharing.  It was a bowl of mixed mushrooms of button, shiitake and enoki.  Though the mushrooms were juicy, the batter was thick and some parts were hard + they were pretty oily too.  The enoki mushrooms were rendered mushy by the wet batter.  I think it would have fared better if a dry seasoned flour was used as a coating instead to give it a crispier texture. 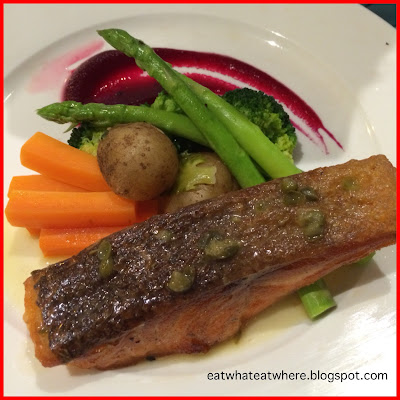 For our mains, we had the easy-to-please Pan-Seared Salmon @ RM38 with baby potatoes, carrot, broccoli and asparagus served with lemon capers sauce and what looked like a beetroot puree.  Did it please?  Well, it did...and did not! ;) 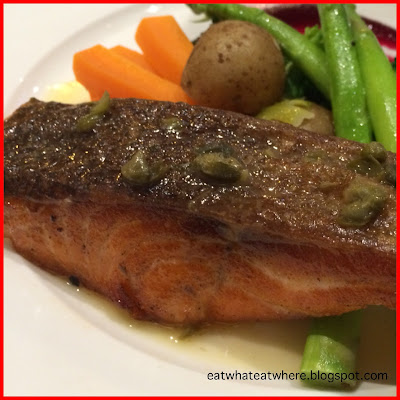 Please it did.....when they cooked the salmon just right with moist flesh and crispy skin. 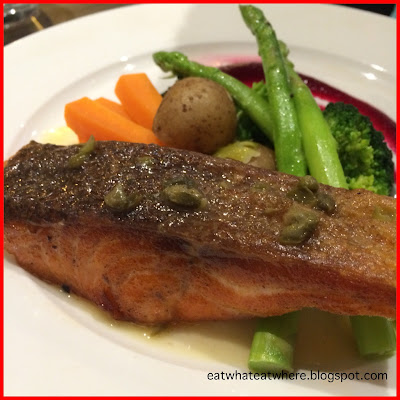 Please it did not...when they drizzled the lemon capers sauce on top.  What's the point in cooking the salmon till the skin is crispy only to have it soften by pouring sauce over it! @_@   Please it did not too...when we noticed our plate of salmon sitting on the pass for quite a few minutes before it was delivered to our table.  Please it did not also...when we saw that the serving size of the salmon was so small...certainly no more than 1.5 inches in width! >_< 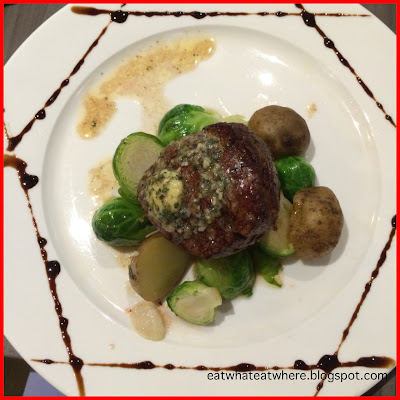 Our other main was the Filet Mignon @ RM78 (RM54 with an opening promotion of 30% discount) with brussels sprouts, baby potatoes and cafe de paris sauce which is basically a butter-based sauce with lemon, shallots and fresh herbs. 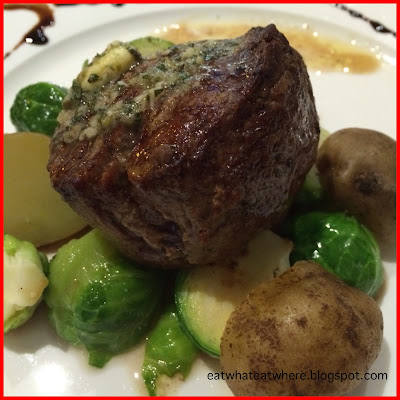 Again, just be forewarned that the portion size is rather petite too (you can get a feel of the size by comparing it to the halved brussels sprouts and baby potatoes served with it).  I know filet mignon is an expensive cut but I guess I wasn't expecting to see such a small portion.  Though the promotional advertisement mentioned that it's +/-200g, it sure didn't feel like it was...and it certainly didn't look like the thick cut of meat showcased in their advertisement.  Because of the circular shape of the steak, you could actually cut the steak into quarters and probably finish it in four big mouthfuls...if you really wanted to...seriously! :P 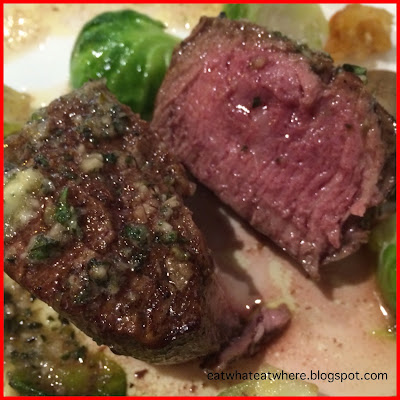 They did, however, get the doneness executed right...medium rare as requested.  The filet mignon may be a more precious cut of meat, certainly very tender, but lean with a mild flavour.  I'm glad I paid only RM54 for it coz if I had paid full price, I wouldn't be very happy with the portion nor taste. 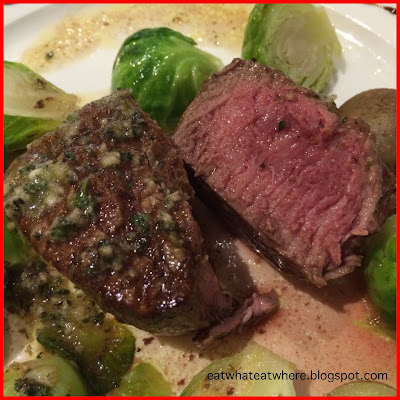 The brussels sprouts and baby potatoes didn't have any sear marks on them (which I've seen in other blogs), so these tasted absolutely bland from just boiling.  They were also slightly undercooked...I could probably excuse the slightly hard texture but what I couldn't excuse was just how underseasoned they were.  They were so bland, I think they weren't even seasoned at all.  They were just 'screaming' for some simple salt and pepper, which I added myself, and they (at least) became edible.  It was the same story with the bland boiled vegetables in the salmon dish. 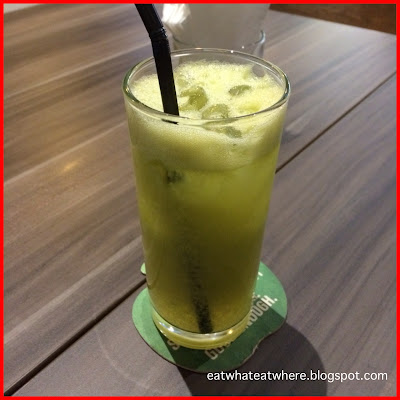 We ordered only one drink, Revitalise @ RM12, a mixture of apple and lemon.  Although water was complimentary, it was not readily given.  I didn't get a glass just because I had ordered a juice and didn't ask for one!  And the glass they used was so small...it was like getting half a glass of water (compared to other places) and, worst still, the water was not refilled the entire duration of our meal.

#Side Story 1
Because we were seated towards the back of the restaurant (near the kitchen), we saw only 3 bottles of water (sitting on the counter) meant for diners and that's probably why it was such a precious commodity for them (and they couldn't 'afford' to give each table their own bottle of complimentary water).

Not only were water bottles scarce, bottles of sauce and seasoning were too.  I asked for chilli sauce for the fried mushrooms and was given a bottle only to have it taken away a little while later.  Although they did ask permission first and I said I wasn't done with it, they still took it away (perhaps they didn't hear me). The same thing happened to the pepper grinder too (I only saw one dispenser of freshly cracked pepper in the whole restaurant!).  They asked if I was done (I was still in the midst of eating) and took that away too. How can you expect to run a fully functioning restaurant when you don't even have enough of the simplest of condiments (such as water, sauces and seasonings) to go round (and the restaurant wasn't even full)!  Hopefully, this has been rectified since my visit 3 weeks ago.

#Side Story 2
I noticed two ladies in the table in front of me had the Honey Mustard Chicken (Buy 1 Free 1 promo) and, judging from their expression when the two dishes arrived, they probably didn't expect the small serving size either.  They got another promo dish of Filet Mignon to share (I'm not sure if that was ordered before or after their chicken dishes came).  Maybe because these were promo items, they gave smaller portions...I don't know.  But if two petite ladies can share three mains, bigger-eaters would probably need two main dishes...each....at least! >.<

Though the service wasn't poor, it wasn't very attentive.  Though the food wasn't half bad, it didn't deliver in every aspect.  Though prices were reasonable, they weren't matched by portion sizes.

Even with a starter and a main each, you'd still come out not fully satiated as portions just weren't hearty enough (in the end, we had to go elsewhere to get something to snack on).

With food taste that didn't impress enough, coupled with smallish portions for the price paid and where service could be better, it came down to just little things that weren't done right that makes me wonder if I'd ever return to This Establishment! :'(