We didn't want to take the chance to venture to the city centre due to the traffic lockdown for the KL City Grand Prix in case there's a massive jam. 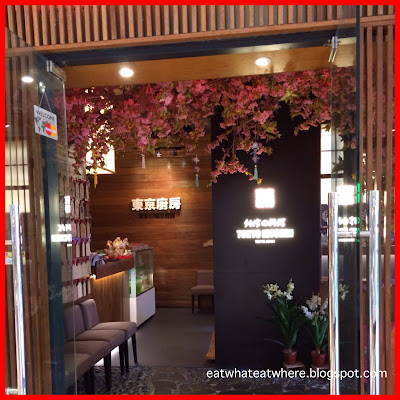 So, we decided to go towards Cheras for dinner that weekend.  I chose Tokyo Kitchen @ ikon Connaught after seeing a reasonably good review on it.  And since they have 8 branches in Klang Valley (from their Facebook), I thought it should be alright. 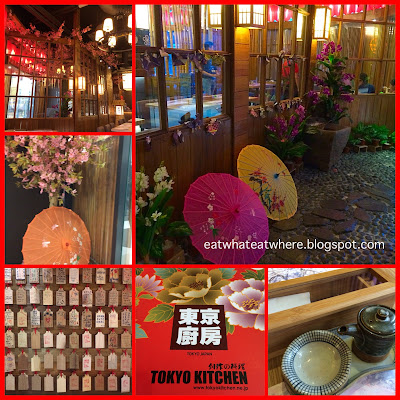 Walking in, I must say that I was intrigued by the lovely décor of the place.  I was liking my first impression already.  Little did I know that this would be the only thing I'd be impressed with. 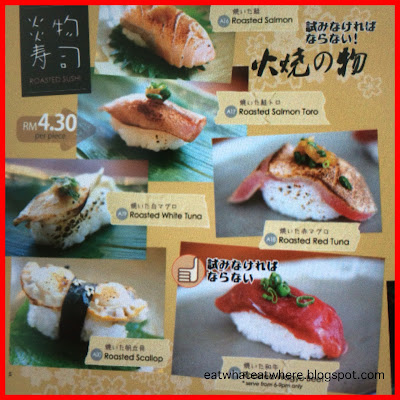 Our meal started with an order of one piece each of the following roasted sushi: Roasted Salmon, Salmon Toro, Red Tuna & White Tuna @ RM4.30/pc.  This was how it looked like in the menu. 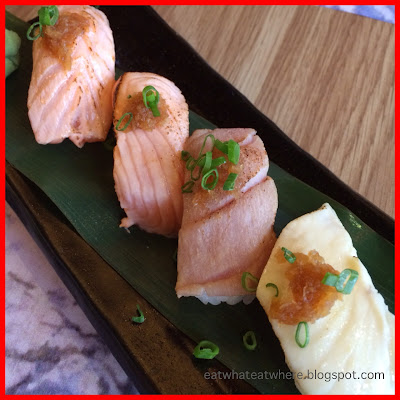 This was what we got....it looked like they've died and went to heaven!  The top two were the salmon while the bottom two were the red and white tuna...and they didn't look anywhere near torched.  The white tuna one was probably the best (or shall I say the least worst) of the lot as all four weren't exceptionally fresh, especially the red tuna which looked dry (a sign that it has probably been in the fridge for way too long). 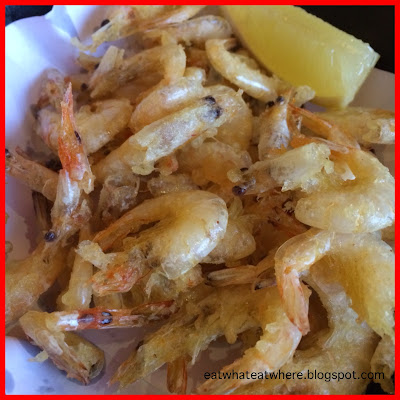 From the stand menu on the table offering some seasonal items, I ordered the Ko Ebi Karaage (Fried Shrimps) @ RM9.80 for sharing.  These were crispy and acceptable although some of the shrimp heads were detached from the shrimps (a sign that they were not super fresh). 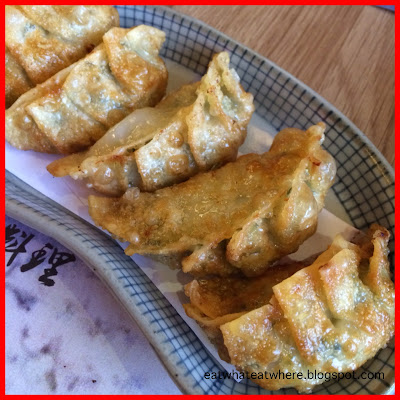 Another was the Salmon Gyoza Karaage @ RM16.80 (for 5 pcs).  These fried salmon dumplings were chewy and barely crispy.  In fact, it looked like the dumplings were not properly drained of its oil before they were served.  But what was worse was that the minced salmon filling didn't taste all that fresh. 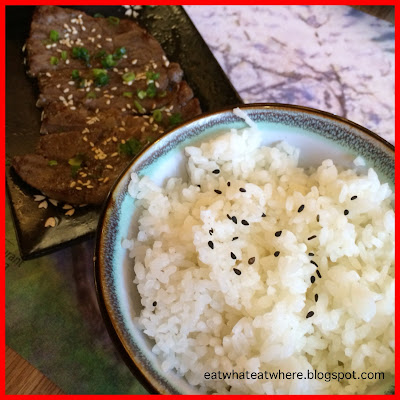 For our mains, I went with the Beef Teriyaki @ RM23.80 (with additional bowl of rice @ RM2.80) since it was recommended as a 'must try' by a blog.  As far as I was concerned, it was more of a 'must avoid' kind of dish.  I've never had beef quite as bad as this in a Japanese restaurant before. 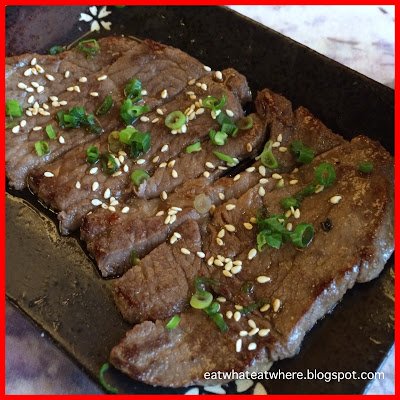 The grilled beef with teriyaki sauce was so overcooked, it was tough, dry and chewy.  It had this very beefy 'not in a good way' smell to it (not sure if that's due to the beef being not fresh or the type of beef). 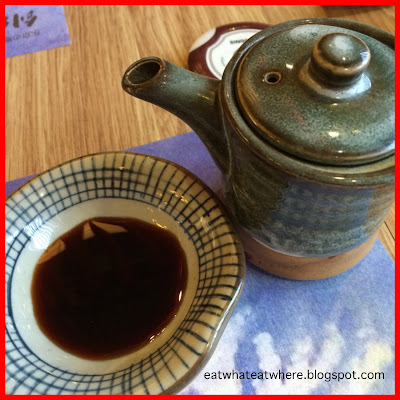 I tried dunking it into some Japanese soy but it didn't help either as the soy tasted like a poor quality one. 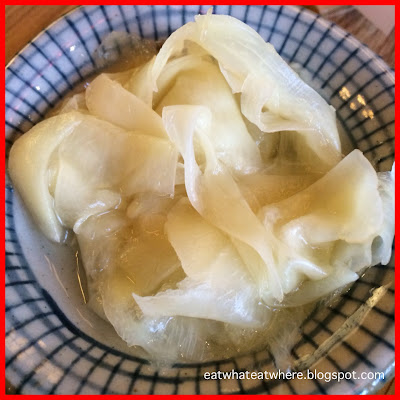 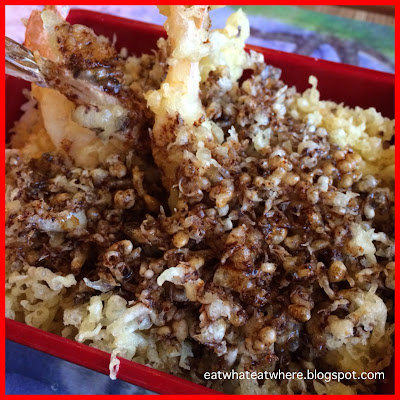 The other main we were attracted to was the Ebi Tempura Don with Black Sauce @ RM23.80 as it was different from the ebi tempura don we usually have.  The tempura prawns and the batter were alright, just that the black sauce didn't do anything for us. 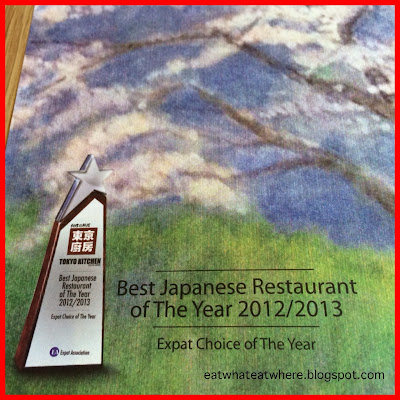 More interesting was this paper mat on our table....note the print out at the corner of the paper.  I shudder at the thought of how this could be true! :D  Anyway, I snapped a photo of it, not because of this but, because I have a story to tell.  When we were seated, we noticed that some of these paper mats on the table were used ones and have stains on them! o_O  I realised then that the restaurant don't replace all the paper mats once the diners leave (and we saw it with our own eyes when the some of the tables were vacated).  The wait staff would replace some (the dirtier ones I suppose) but not all.  Omg...how cheapskate can the restaurant be (well, if you can't afford to replace a simple paper mat, then don't have it at all)!!  I don't think the wait staff is at fault, they've probably been told to do so.  As if the food wasn't bad enough, this thing sure was!
Our drinks: 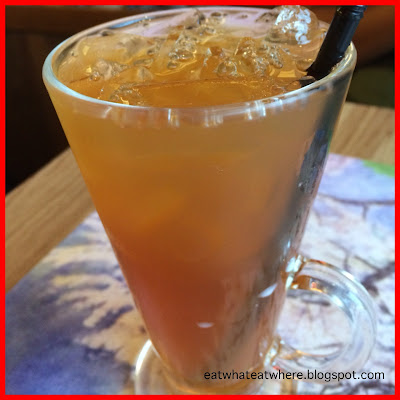 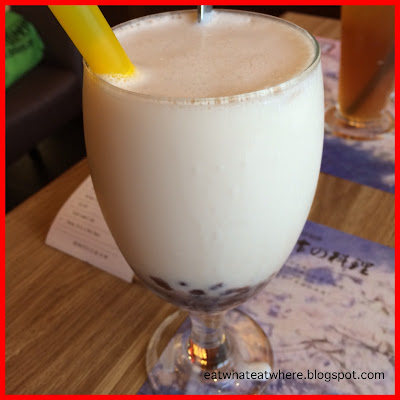 I was attracted by the Honey Milk with Red Bean @ RM6.80 which, surprisingly, turned out to be pretty good, so much so that I'd like to show you two pics of it...kekeke ;)  I don't usually enjoy the taste of milk but this honey milk I liked. 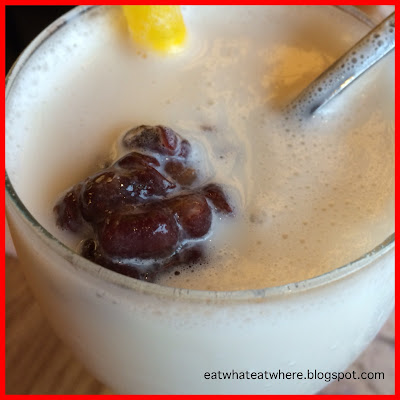 I thoroughly enjoyed the sweetness of the softened red beans in a not overly sweet cold honey milk concoction.  It ended up to be the best tasting thing on the table! T_T

Regrettably, I was more impressed with the décor than the food.  What I had, I wouldn't want seconds....except for the cold honey milk with red bean...that I want!

With a meal that cost RM65 a person, I can surely find better options elsewhere.  I'd much rather have a sumptuous bowl of Tendon @ RM26 at Yuzu anytime.
Am I enticed to return to sample other food?  Not unless you have a gun to my head! >.<

Email ThisBlogThis!Share to TwitterShare to FacebookShare to Pinterest
Labels: Another One Bites the Dust (aka Closed), Food: Japanese, Location: ikon Connaught