I liked the Fresh Coconut Jelly that I bought from the ramadhan bazaar some time ago and I thought to myself....why not make it at home.  It should be simple enough...all you need is just two ingredients...coconut and agar-agar powder. 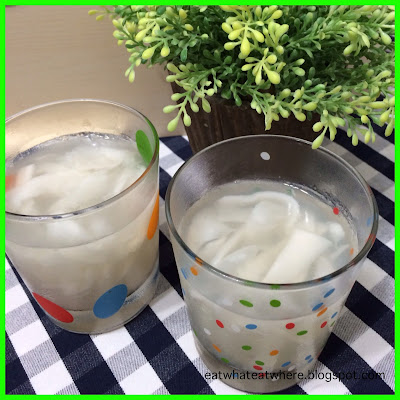 The one I bought from the pasar ramadhan (RM3 for two) only had a hint of coconut flavour in the coconut jelly.  I'm sure they would have added water and sugar to it to bump up the quantity of liquid + they probably used the local coconuts which are cheaper. 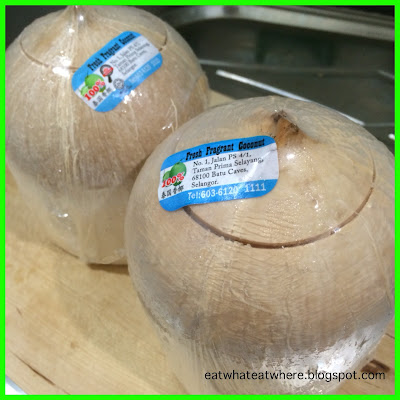 I'm going to substitute it with the Thai (young) coconut which is more fragrant (and sweeter) in terms of flavour and taste.  So, I bought two for RM11.60 (RM5.80 each)... 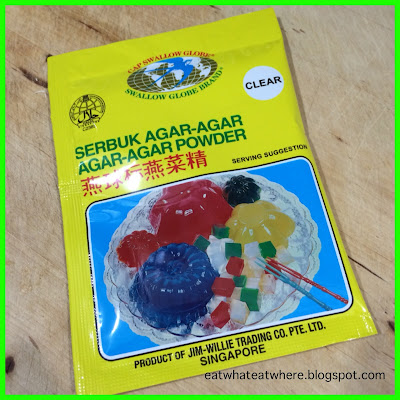 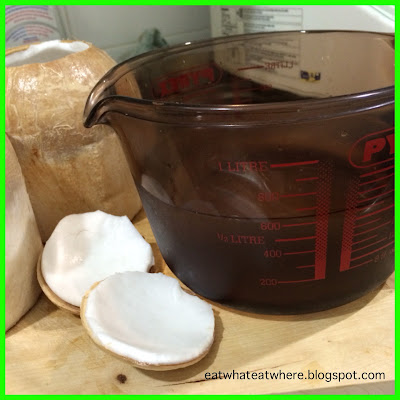 First, empty the coconut juice into a jug.  I managed to get around 600ml of juice from the two coconuts. 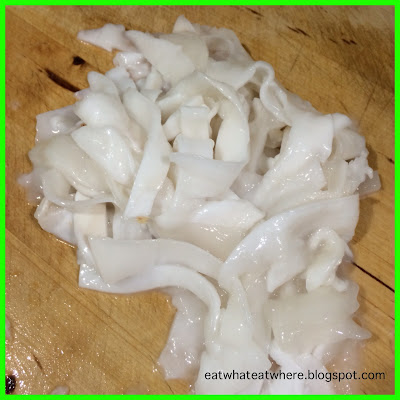 Scrape the flesh off the coconut and roughly cut into smaller strips.  This flesh came from only one of the coconuts.  As it turned out, the other one (unfortunately) was not that 'young', so the flesh was a bit hard.  But it's fine as you only need the flesh from one coconut (even if you had more flesh, don't dump it all in as it'll be too much). 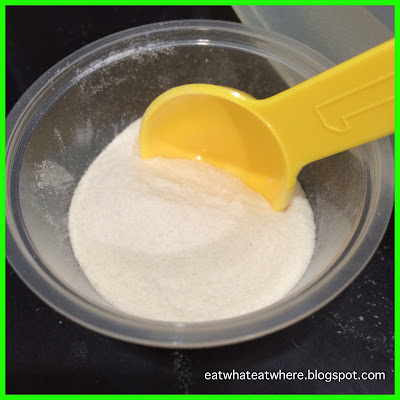 Now, here comes the hard part....the quantity of agar-agar powder to liquid.  After looking at the recipes online, I was even more confused as it varied from 1/4 tsp to 3 tsp for 500 - 600 ml of liquid (and none of them mentioned the texture of their jellies and you obviously can't judge the texture from the photos).  So, I fell back on the instructions on the packet which was 10g of agar-agar powder (about 3 1/2 tsp) for 1 litre of liquid.  So, I decided to use 2 tsp for the 600ml of coconut water from the two coconuts. 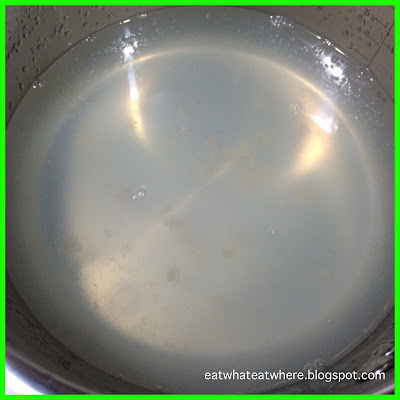 Pour the coconut juice into a pan and bring it to a simmer and put in the 1 tsp (or your desired ratio) of agar-agar powder.  Stir until the agar-agar powder dissolves.  [#Tip: If you think you want to do a lazy man version and pour some hot water into the agar-agar powder to dissolve it and then pour that into the coconut juice, let me tell you it doesn't work...I tried....the powder clumps up, it doesn't dissolve!  You have to keep stirring it in the simmering juice to dissolve it.] 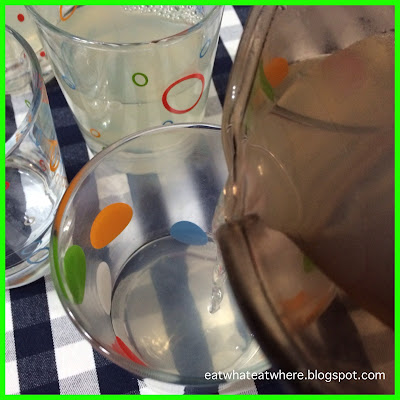 Once the agar-agar powder has fully dissolved, pour them into your little glasses...the 600ml juice was able to fill only four of my small glasses.  [#Tip: If you're using plastic cups, let it cool down a bit before pouring into your plastic moulds (but not too long, otherwise they'll set). 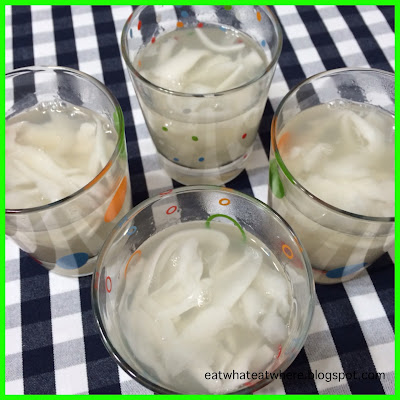 Then, divide the cut up coconut pieces into the four glasses and let it cool for a while before putting into the fridge to firm up and chill (although it'll also set at room temperature). 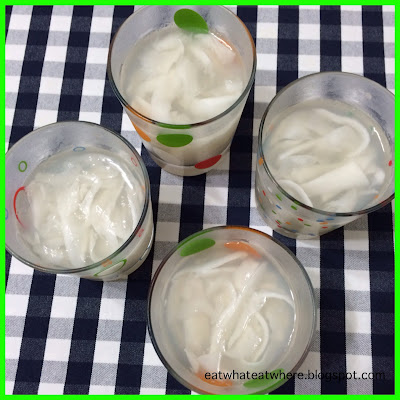 Here's how they look, straight out from the fridge, after they have set.  It's ready to be eaten.  Because I used Thai young coconuts and didn't dilute it with added water or made it sweeter with sugar, I found it to be just nice, with just the natural sweetness from the coconut juice, and very fragrant. 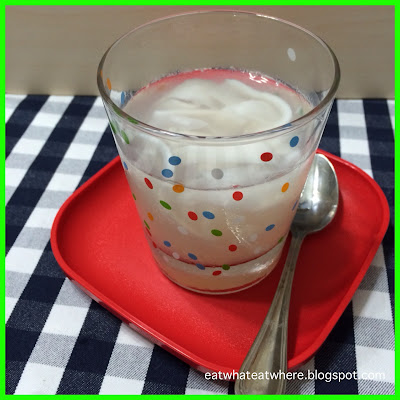 Although my homemade Fresh Coconut Agar-Agar may cost RM3 a cup (double the price of the ones I bought), this one tasted a lot better as it's not diluted with water and no sugar is added!

After realising that this cold dessert was so good, I did a few more test runs on other occasions....1) to find my ideal ratio of agar-agar powder to liquid and 2) so that I can eat more them, of course. 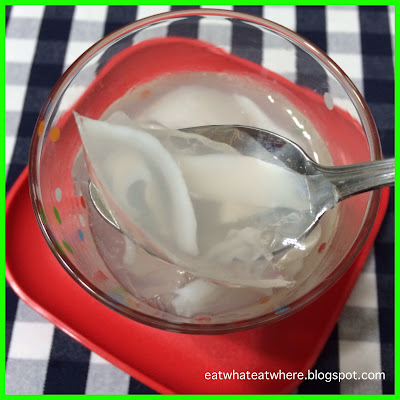 This was the first one with 2 tsp to 2 coconuts which turned out a very firm coconut agar-agar.  I think the firmest texture is best suited if you want to make a tray and cut them up into nice squares before serving. 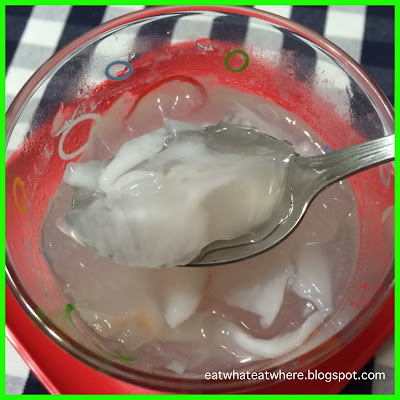 And this was the one with 1 tsp to 2 coconuts and the texture is, of course, slightly less firm. 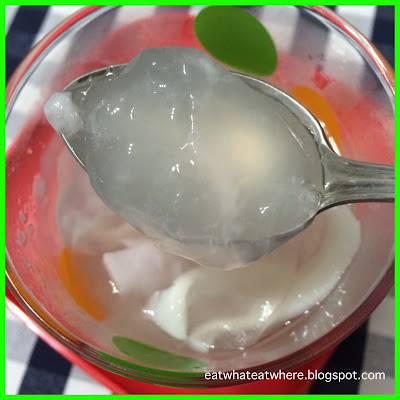 Finally, this was the one with 1/2 tsp agar-agar powder to 2 coconuts (600ml of juice) which yielded a very soft and smooth texture, almost jello-like, which you just need to slurp into your mouth!  I think this probably has the same consistency as those Penang Coconut Jellies I see online.  So, if you like those, this would be the ratio for you! 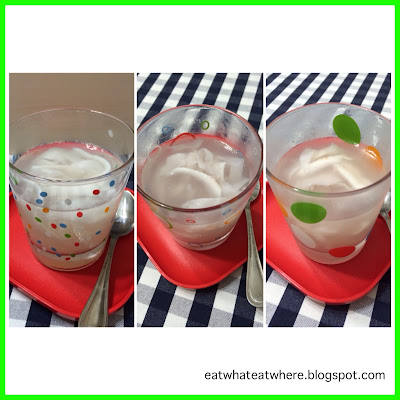 It really depends on how you like your jelly...soft or firm!  Just know that the softer the texture, the longer the time it'll need to set in the fridge.  For me, I think my favourite is the one with the ratio of 1 tsp to 2 coconuts for an ideal texture of not-too-soft and not-too-firm ;) 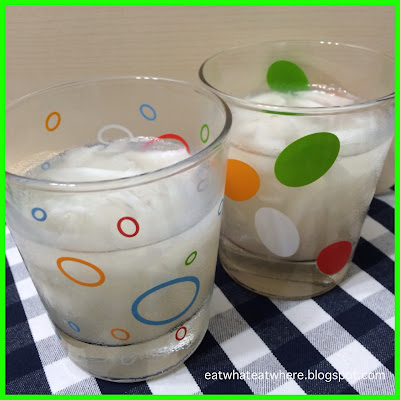 Whichever texture you like.....firm or soft...there's a jelly or agar-agar out their for everyone! ;D  And what's even better, it's a healthy dessert you can easily make and one you can indulge in frequently (just like drinking coconut water).  A chilled dessert like this on a hot day is a welcome treat indeed.  Enjoy!!
Posted by contact.ewew at 10:46