Based on two friends' recommendation, I decided to check out Frisson Coffee Bar @ Damansara Uptown for breakfast with my family after Sunday service (only to realise later that one of my friends wasn't actually referring to this cafe)! @_@ 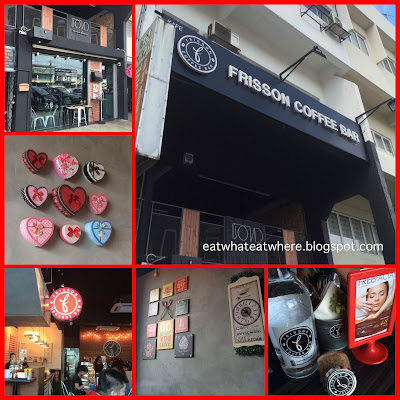 Opened about a year and a half ago, this brunch cafe serves your favourite breakfast staples, pasta, pizzas, pies, croissants, burgers, waffles, french toast and even fish head curry.  They probably got more popular after OneFM's recent video and review.  Arriving a little after 10am, it was pretty easy to score a table as it was less than half occupied. 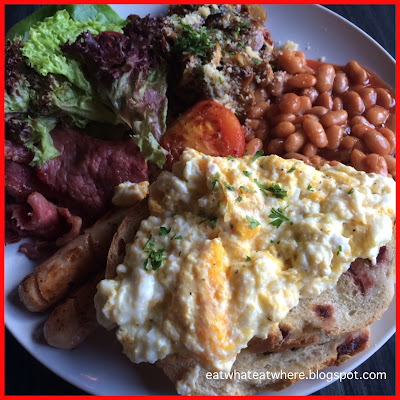 Like any brunch cafes defined by their big breakfast, I just had to order their version, Frisson Big Breakkie @ RM29.90 consisting of beef bacon or chicken ham, chicken sausages, mushrooms, grilled tomato and baked beans with your choice of eggs done sunny-side up, scrambled or omelette style. 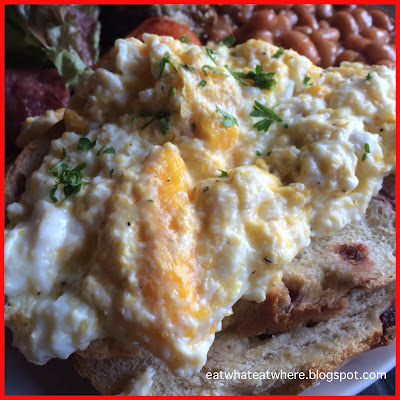 Let's start with the scrambled eggs on top of some buttered (but not toasted) cranberry-type bread that offers a bit of a chew.  Not very fluffy or creamy, but still alright (not overcooked), you can see that their eggs are not whisked evenly, the whites and yolks still remain somewhat separate entities when cooked (not quite my idea of the typical scrambled eggs). 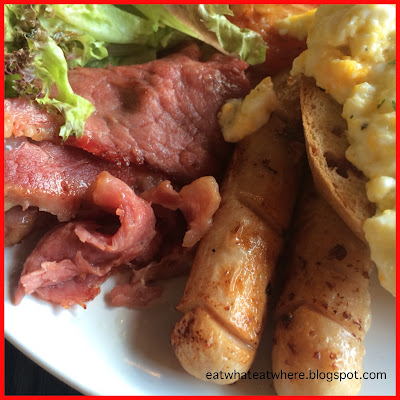 The usual beef bacon and chicken sausages...nothing out of the ordinary. 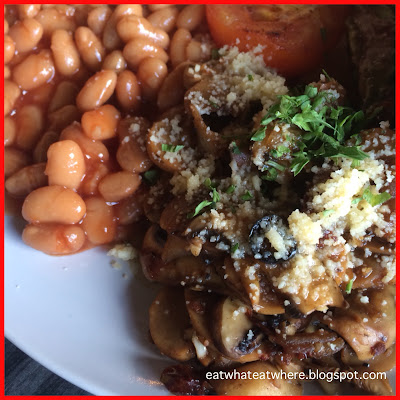 The sauteed mushrooms (cut too thinly for my liking and thus lost some of its juiciness) were sprinkled with grated parmesan cheese on top (which was rather unusual) and had a sourish element in them (perhaps from lemon juice).  The baked beans tasted similar to those straight from a can. 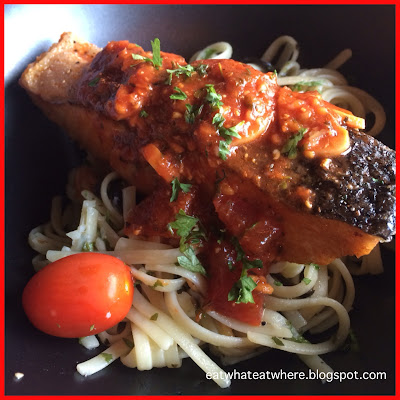 If you prefer pasta, they have quite an extensive selection (with about 14 types) and we settled for the Garlic Basil Salmon @ RM31.90 with linguine.  In fact, judging from the menu pics and description (and the absence of choice), linguine seems to be the only type of pasta available. 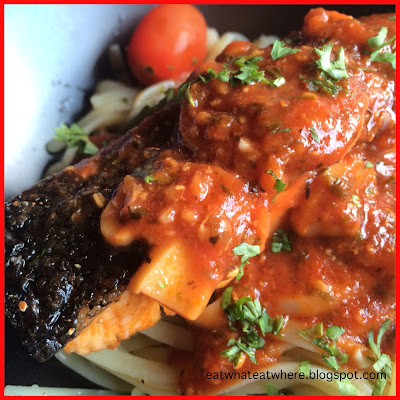 The linguine (cooked just right) was tossed with garlic, basil and parsley and served with a pan-seared salmon topped with some marinated tomatoes in a tomatoey sauce.  The salmon, though well cooked through, remained fairly moist but there was no crispy skin because of the marinated tomatoes sitting on top which was a tad on the acidic side.  I couldn't help but feel that the tomato sauce, though house-made I'm sure, tasted like one I'd make at home (which is out of a jar)! ^_* 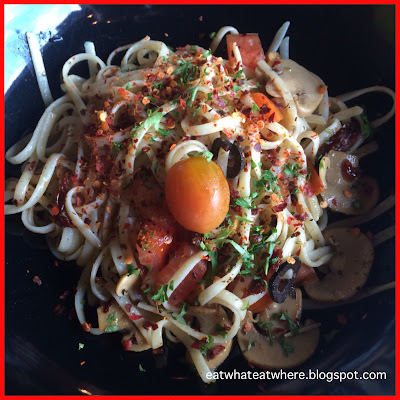 We added the simple and light Aglio Olio @ RM19.90, tossed with sun dried tomatoes, black olives, chilli flakes and mixed herbs, as our other pasta dish.  They seem to like to put black olives in a lot of their dishes as I found them in both the pasta dishes (and even in the sauteed mushrooms in the big breakfast), so if you don't quite fancy black olives all that much (like me)...well....Houston, we have a problem! :D 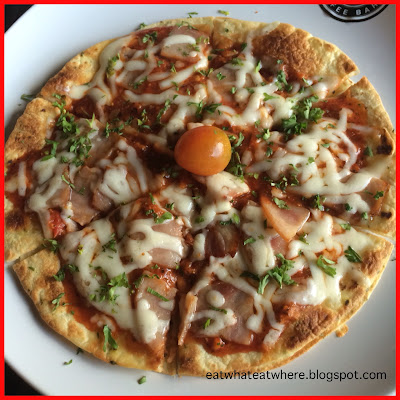 Since my mother-in-law enjoys eating pizzas, I chose a Frisson Skinny Pizza @ RM18.90 with chicken ham (other choices include vegetarian, beef pepperoni, salmon or smoked salmon).  It's an 8-inch pizza with Frisson's special sauce infused with 19 different ingredients topped with parmesan and mozzarella cheese (as stated in the menu). 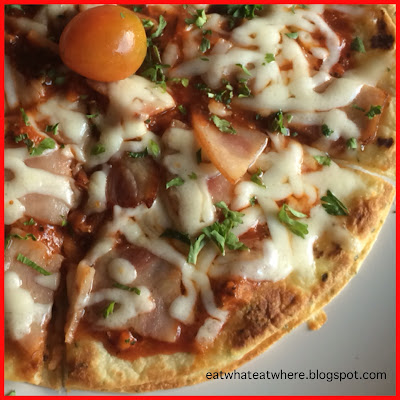 Unlike those doughy pizza bases, Frisson's skinny pizza resembles two sheets of toasted tortilla, so it's definitely thin and crisp...that can be easily consumed by one (who probably won't be fully satiated).  Taste wise, think of eating a (large) water cracker and you can get the gist of the taste.  It was like if I was eating two thin and bland water crackers with some scant pizza toppings....and the special sauce with 19 ingredients tasted like any run-of-the-mill sauce (nothing great, actually tasted similar to the tomato sauce on top of the salmon).  Pizza traditionalists will be disappointed.  And...at that price?! -_- 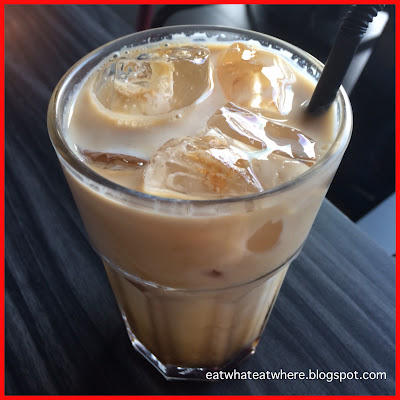 For coffees, we had an Iced Toasted Hazelnut Latte @ RM14 that looked more milky than anything else although my mother-in-law seemed to like it.  For me, the coffee taste took a back seat. 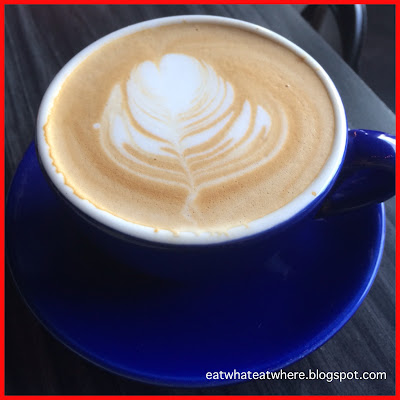 I had a Flat White @ RM11 and again the coffee was.....meh!  Also, if you want some nice looking latte art, you won't find it here.  Ya, ya, I heard you...I've only had one cup, so how can I come to that conclusion? Well, look at the coffee photos in the other blogs (or their Facebook) and you'll see what I mean. 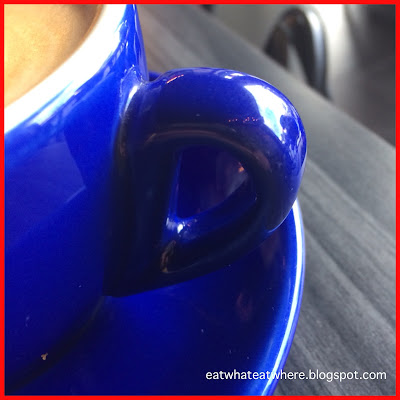 My other gripe was the cup handle.  Like their skinny pizzas, their coffee cups are made for skinny fingers!! >_<  It might look big in the close-up but it ain't.  Maybe it's the slim D-shape of it that makes it very difficult to put your finger through and have a good grip, so I ended up having to use both hands to steady the cup while I drank...*deduct brownie points* 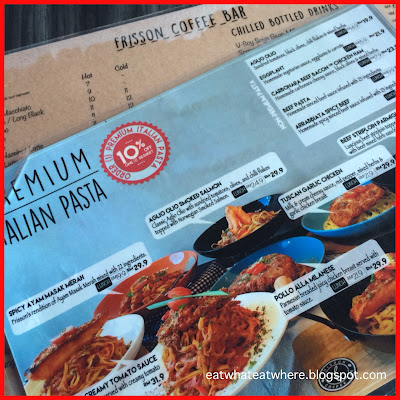 Another contention I had with the place was that I was surprised to find that the menu had two sets of prices for each dish.  When I enquired, the server told me that the lower prices are the lunch prices for weekdays (and some of these prices can be lower from anything between RM3 - RM10...which is a lot!).  I don't know if it comes with smaller portions.  I'm just shocked that they have two prices! O_o  I don't know why they would want to do that.  It'd be better (in my opinion) to offer a free drink with mains (on weekdays) to provide better value for money (or come up with set lunches or offer a discount or something) than pricing the same dish with different prices.  I guess if you work in the area, you can come try it out and see for yourself during weekdays.  If they do serve the same portion of food for different prices on different days, then I feel somewhat suckered! >.<

Though my dining experience here wasn't what I had hoped for (sorry, friend), the food would probably suit some palates....just not mine!  For me, the dishes I did try were just so-so...average at best.  Maybe I should have ordered their more popular dishes like the Donut Ringmaster Burger @ RM25.90 or the Wessy Waffle Burger @ RM26.90 (pics of dripping cheese, peanut butter and jelly might be a turn on for some, not me).

Or maybe they're better at desserts (they offer quite a few) like the P.TripleB French Toast @ RM19.90 with bacon and banana served with rich vanilla custard, peanut butter and honey (just those last 3 words are enough to send me into a diabetic coma!).  I wouldn't be able to confirm if they fare better at desserts since I didn't try any.

Compounded by the higher than norm prices that weren't matched by the taste, I'm afraid I don't see myself returning (after this maiden visit) as the food just didn't excite my senses enough!  Even if I had wanted to return (to try more stuff and give them a second chance), it would be a monumental task to drag my family here since they weren't impressed! :(