I can't possibly do a post on Restoran Win Heng Seng and leave out the best thing here, can I?  Whenever I pass by Restoran Win Heng Seng or after I've had breakfast here, I noticed that there's always a perpetual crowd buying baked pastries from a stall within the coffee shop...and that's the Tai Zi Tai (Mini Egg Tarts) @ Jalan Imbi. 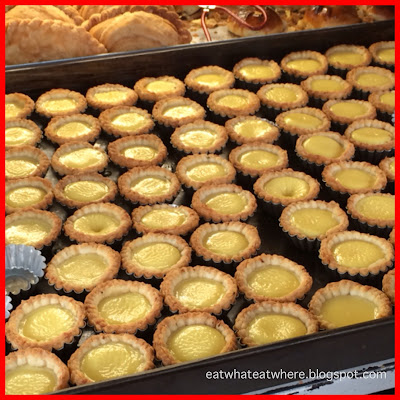 On closer inspection, I realised that their mini egg tarts looked freakishly familiar to the ones I've been eating from a tiny shop in Jalan Bunga Mawar 2, Taman Muda, which I used to frequent some years back. 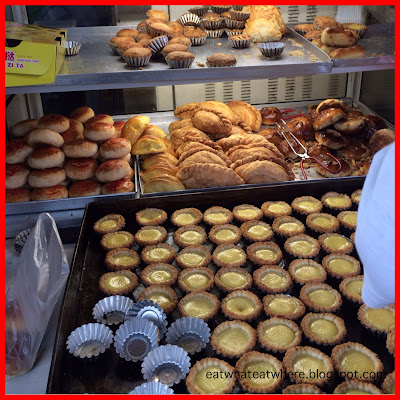 So, one Sunday morning after breakfast, I finally decided to "tapau" (pack) some home to try. 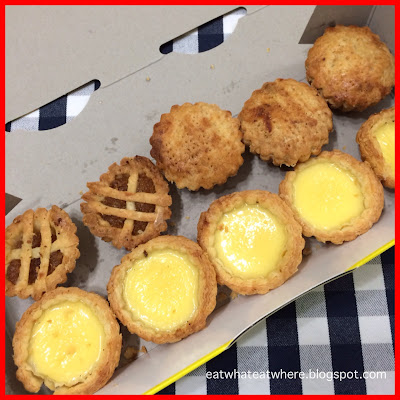 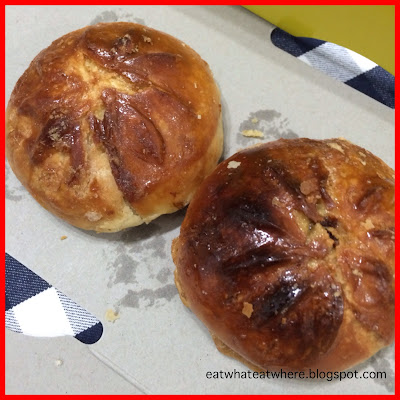 Let's start with the siew pau @ RM1.70/pc.  They came piping hot from the oven with this incredibly fragrant aroma that permeated the entire car on our way home...and they were delicious.  However, they weren't as good on another occasion when I wasn't lucky enough to get them hot-from-the-oven.  But, I soon realised that this could be easily fixed (as I had some leftover ones in the fridge the next day).  Just reheat them in a toaster oven for 3 minutes and they come out nice and warm (and taste exactly like the freshly baked ones you got on the day itself)...yay....now I can buy extras (and put them in the fridge) and know that the taste and texture will not be compromised! ;) 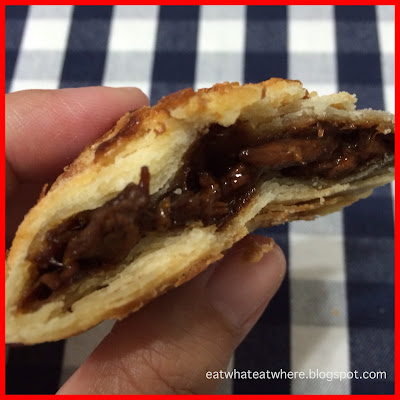 The well baked exterior was nice and crusty.  The slightly chunky, shredded pork filling (not minced) inside, a bit similar to those you'd find in "char siew pau" (steamed pork bun), was well caramelised and flavourful...and I like the fact the filling is more savoury than sweet. 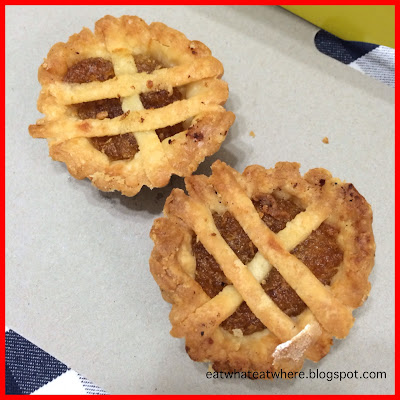 This is the mini pineapple tart @ RM0.80/pc.  I think you'll need some nimble fingers to make these dainty pineapple tarts, especially the criss cross pastry. 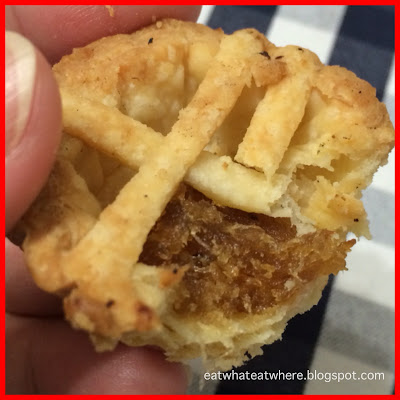 The pineapple filling was slightly tart and not too sweet which suited me fine! 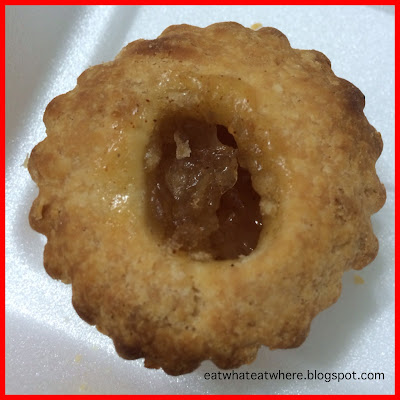 This is the mini apple tart @ RM0.80/pc with an apple filling that is also slightly tart. 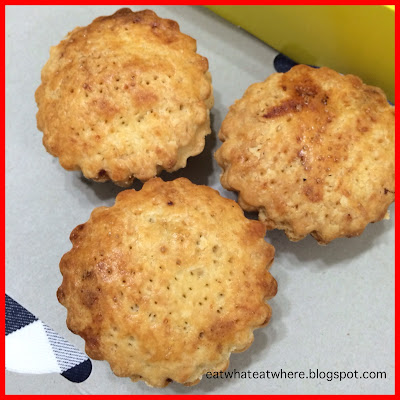 This is the mini tuna tart @ RM1/pc.  A flaky crust encased a flavourful tuna filling that has been mixed with cooked down onions, peas and corn. 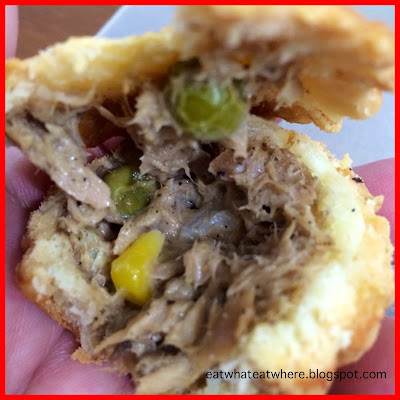 It's quite easy to remove the top of the tuna tart to reveal a tuna filling with a distinct black pepper taste (in fact, you can see lots of black pepper flakes in the filling). 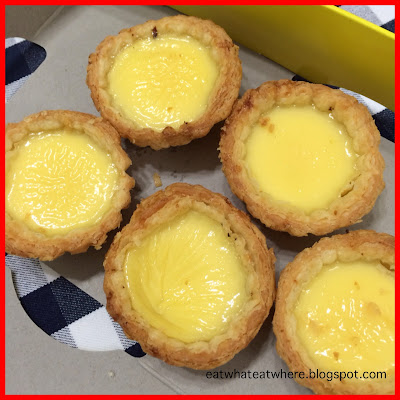 Finally, the mini egg tart @ RM0.90/pc is certainly their most saleable item.  As soon as the trays come out, they are snapped up immediately.  They're made fresh daily on site, that's why they're so good.  When you get your hands on these tarts, they're still warm...maybe even hot if it's a new batch and fresh from the oven. 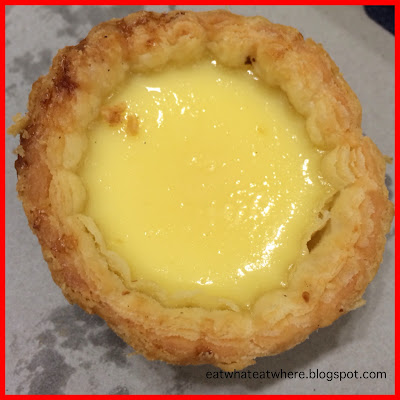 The mini egg tart has this absolutely soft silken smooth egg custard enveloped in a flaky crust that didn't have much of a buttery smell.  I was told that vegetable or lard shortening is sometimes used (instead of butter) if you want really flaky egg tarts (or a combination of both).  I wouldn't mind a bit more of the egg flavour in the custard though. 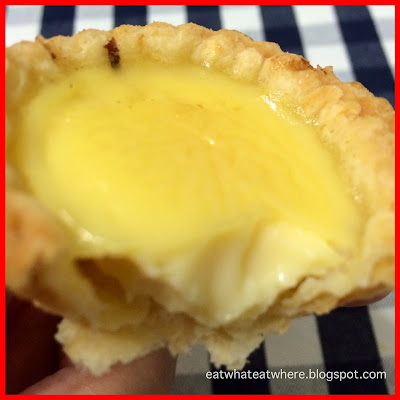 The pastry is incredibly light and flaky.  It crumbled easily when you bite into it...but you don't need to do that coz it's so small, you can pop the whole thing into your mouth at one go...easy peasy, no mess!  It's so soft that it just disintegrates in your mouth!  In the words of a fellow blogger at realgunners...they're "super duper mind blowingly heavenly awesome delicious tarts".....well, I would say that they're good but I probably wouldn't be as generous with the adjectives...kekeke! :D 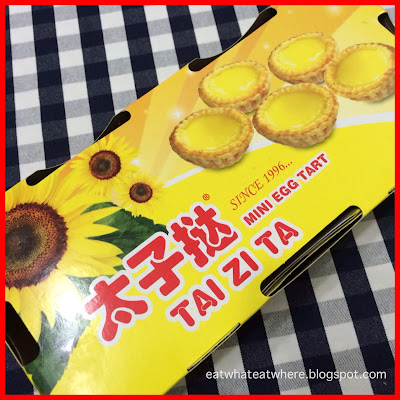 Finally, let me show you the packing for the tarts I got from Jalan Imbi.  Does that look familiar to you?  Hey, it's the same packing as the tarts from Taman Muda!  They used to be packed in polystyrene boxes but now they have custom made boxes.  So, for those of you who are wondering if they're the same, that's the confirmation they should be one and the same. 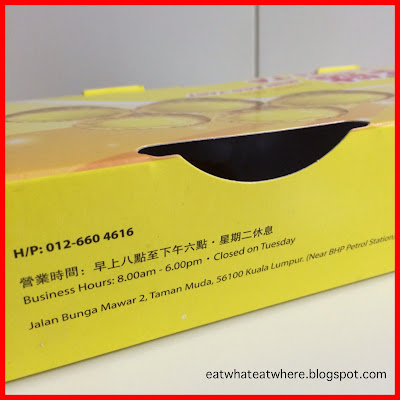 Still doubtful?  Even the Taman Muda address is printed on the side of the box used by the stall.  Still not convinced?  I asked the lady manning the stall and she confirmed that they're the same although some things you find at the other shop in Taman Muda, you can't find it here...like the coconut tarts....as she said she simply does not have enough space to bake them here.  Come to think of it, I couldn't find the mini kaya puffs either.

I love anything mini.....mini (Thai) pineapples, mini (quail) eggs...and mini egg tarts ;)  I think Tai Zi Ta mini egg tarts are such a crowd favourite because of the fact that they're mini-sized...and super easy to eat.

My top favourites are the egg tarts and siew pau but I must admit that eating it when it's still warm and fresh out of the oven, it does taste loads better.

So, whether you get the mini egg tarts from Jalan Imbi or Taman Muda, you'll be really happy with these mini treats and.....remember...one is never enough....and (by that) I mean one box! ;D