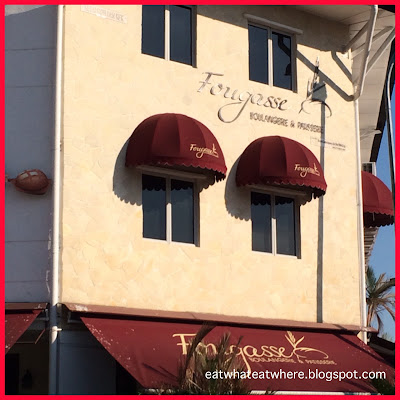 Since my previous post, they have changed quite a few items on their Breakfast Menu although they have also retained some of their highly popular dishes like the Tuna Mushroom Croissant and Scrambled Egg Croissant. 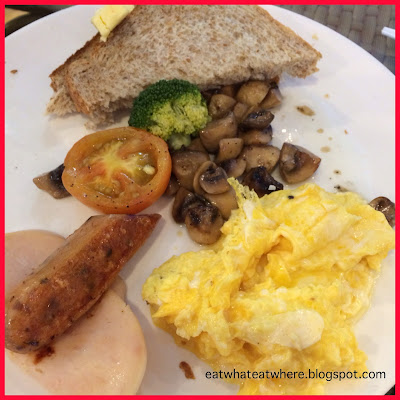 The Big English Breakfast @ RM16.80 featured scrambled eggs, chicken ham, sausage (only half), baked beans, mushrooms, tomato and toasted bread.  This one (minus the baked beans on request) looks (and tastes) ordinary, something I can easily whip up myself at home. 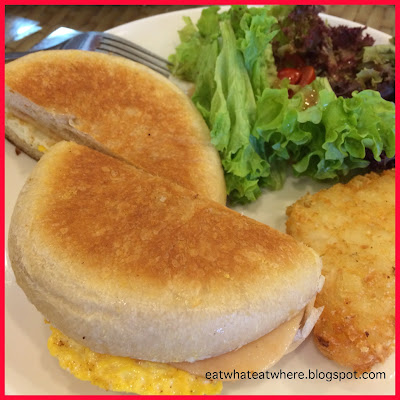 This is one of their new breakfast items, the Ham & Egg Muffin @ RM13.80 which is an English muffin "kiap" (sandwiched) with a fried egg and chicken ham served with hash brown and a green salad. 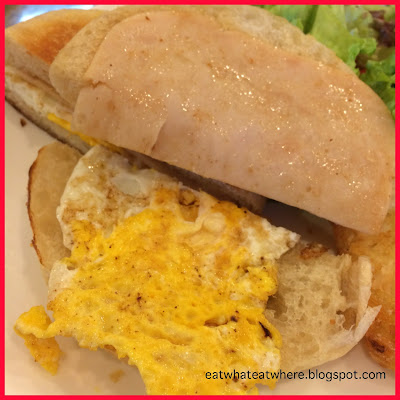 I liked the simple taste of a soft muffin with a fried (but not oozy) egg and it was one of the options (for me) that didn't come with cheese. 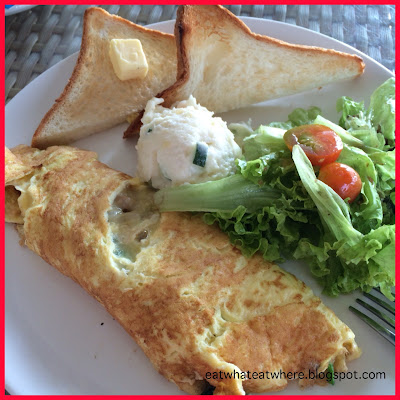 Another new breakfast item is their Omelette @ RM13.80 which is filled with sautéed mushrooms, chicken ham, spinach and cheese with a potato salad, salad greens and toasted bread.  The potato salad may not be the smoothest around but it has a few hidden gems like chicken ham and chopped crunchy Japanese cucumbers in between that makes for a nice bite.  There wasn't an abundance of cheese in it, so it was tolerable still for me.  It was a hearty and filling breakfast. 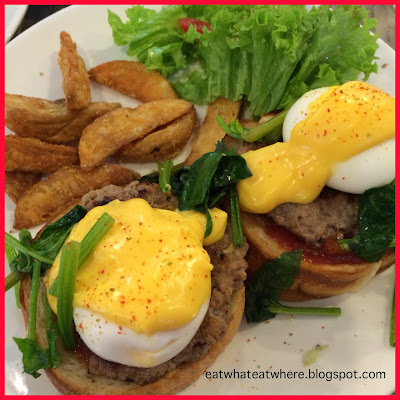 Yet another new item on their breakfast menu, the Eggs Benedict @ RM15.80 came with two (supposedly) poached eggs on homemade beef patty, sautéed spinach and cheese sauce on log bread, served with a side salad and potato wedges. 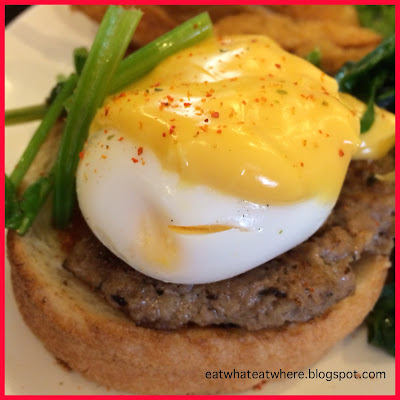 This was no ordinary Eggs Benedict, in fact, I wouldn't even call it Eggs Benedict.  I just jumped at ordering the dish without reading the description....it was a big mistake! T_T  It wasn't hollandaise sauce, it was cheese sauce...and you know I hate cheese sauce and this one was really foul tasting! :'( 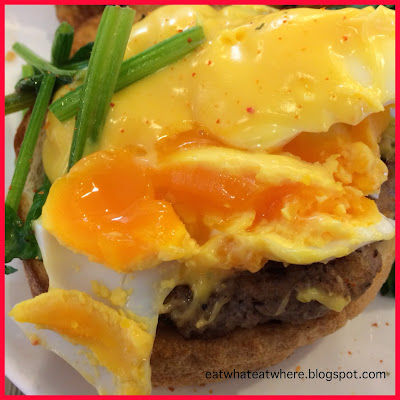 And, instead of getting perfectly cooked poached eggs (with an oozy centre), I got this almost hard-boiled egg with an overcooked yolk.  When I complained that the egg was way overdone, the server (and later the supervisor as well) said that's how the egg is supposed to be! O_o 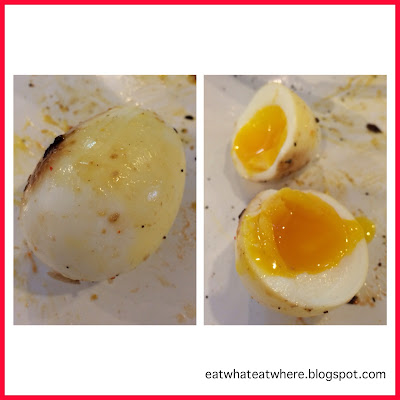 Let me show you the other egg on the plate.  This one had a slightly runnier yolk, the egg whites were still solid like hard boiled eggs.  Does this qualify as a poached egg?  I think it'd more at home in a bowl of ramen.  Do not, (I repeat) do not order this dish here.....it's downright horrible! >.< 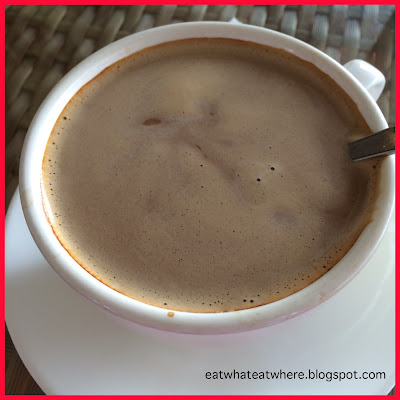 Of course, the best thing is that a complimentary tea or coffee is included in all the breakfast orders which makes it a really good deal as you don't have to pay extra for a cuppa! 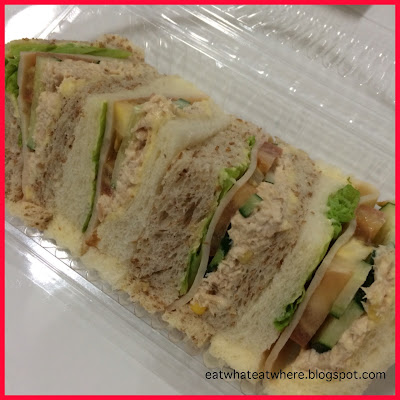 If I want to grab a breakfast to go, my usual haunt will be the mini sandwiches which comes in four quarter slices in both white and wholemeal bread.  This is my all-time favourite, the Tuna & Ham Sandwich @ RM7.30, with crunchy vegetables of cucumber, lettuce and tomatoes.  I liked that the tuna is mixed with some sweet corn to provide a burst of sweetness. 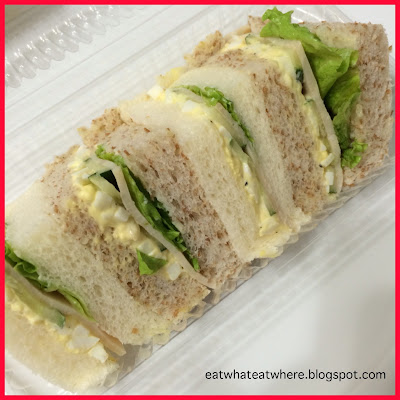 And this is the Chicken Ham & Egg Sandwich @ RM6.90 with lettuce and cucumber interspersed with smashed hard-boiled eggs and chicken ham.  The bread is slightly thicker than usual ones and very soft.  There's nothing to not like when it comes to simple sandwiches made fresh. 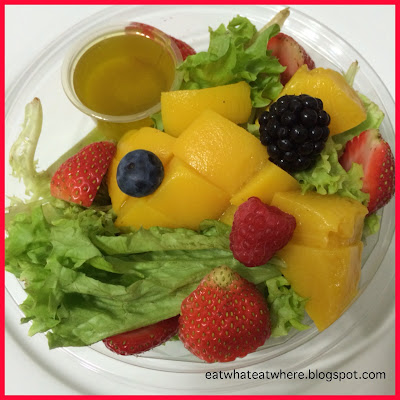 I sometimes accompany these sandwiches with a Fruit Salad @ RM5.90 to make a light lunch if I'm not particularly hungry.  You get crisp lettuce leaves with some freshly cut mangoes, strawberries, blueberries (a few), raspberry (just one) and blackberry (also only one).  It came with a dressing of an almost puree-like mango sauce and olive oil mixture that tasted a bit zesty. 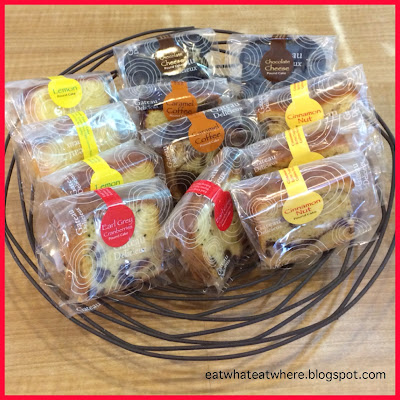 I also noticed these pound cakes (5 flavours) selling on a recent visit...Lemon, Cinnamon Nut, Earl Grey Cranberries, Caramel Coffee and Chocolate Cheese @ RM3.20 each and decided to get some to try. 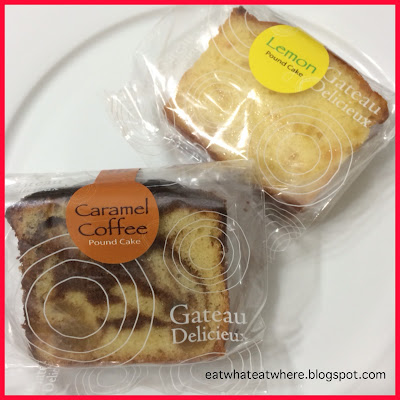 The Lemon Pound Cake had a moist buttery richness with a rather intense flavour of lemon from the bits of lemon peel in the cake.  If you love the tangy taste of lemon, you'll certainly enjoy this as it comes with a good dose of lemon flavour.  The Caramel Coffee Pound Cake was not as soft as the lemon pound cake but what was interesting about it was that you'd find pineapple cubes in them (which I initially thought were white raisins until I read the list of ingredients).  It was a surprising blend of pineapple and coffee taste but it worked...I liked it! 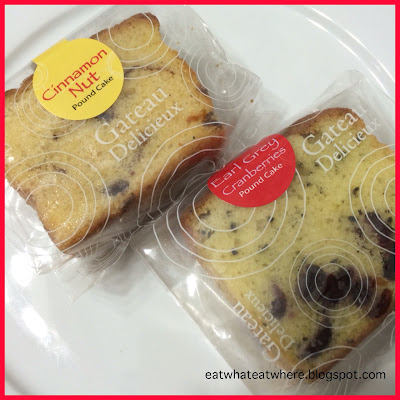 The Cinnamon Nut Pound Cake had a contrasting crunchy texture coming from the cashew nut and walnut when you're lucky enough to bite into bits of it.  Finally, the light textured Earl Grey Cranberries Pound Cake had more cranberries than earl grey tea flavour.  Overall, all the pound cakes had a nice texture but my favourites were the lemon and caramel coffee.

If I had another choice of a café serving western breakfasts in my neighbourhood, I certainly wouldn't be patronising this place....but I don't :(  All the hot food from the kitchen ain't that great as some of the items tasted processed or frozen to me.  But, if you still need to eat here, go for the breakfasts with croissants, the less disappointing choices (in my opinion).

From now on, I think I'll just stick to the pastries, breads, sandwiches and cakes when I'm here for breakfast...at least those are decent enough! ;)