You can call Alexis a bistro, a wine bar and a jazz club (with live jazz performances during weekend nights).  Nestled in Kuala Lumpur's commercial and embassy district, Alexis Bistro serves a contemporary menu of Asian and western cuisines made with the finest ingredients.  Their wood-fired oven dishes up scrumptious thin, crispy pizzas and their famously delicious and freshly made cakes are notably in demand. 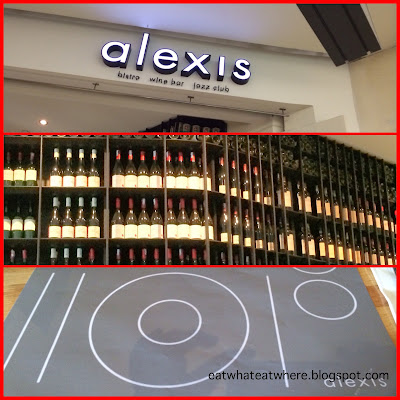 I went to Menara Great Eastern as I had some banking matters to attend to.  After settling my banking stuff, I thought I might as well have lunch at Alexis Bistro @ Great Eastern Mall. 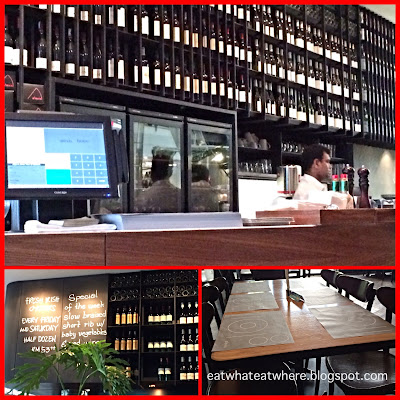 When I first walked into the bistro, the first thing that caught my attention was the stunning bar and the array of wines on display.  From this, you can be assured that they offer an extensive wine list for your drinking pleasure.  Besides this, the place exudes a stylish decor and a chic setting for a relaxed dining ambience (and there's an alfresco dining area as well).

As I wasn't very hungry, I ordered a simple dish of Mushroom on Toast @ RM24 from their 'sandwiches & other things' section.  This comprised of sautéed portobello, shimeji and button mushrooms on a toasted multi grain bread, with white truffle oil, and topped with wild rocket. 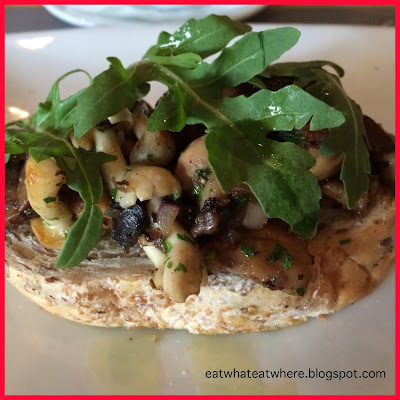 The multi grain bread was incredibly soft and the 3 types of sautéed mushrooms (sprinkled with fresh parsley) tasted really good probably because white truffle oil was used which further enhanced and intensified the taste of the mushrooms.  [#Tip: Truffle oil tastes like the 'earthiness of mushrooms', that's why it's usually described as 'earthy', 'mushroomy' and 'with an intense mushroom flavour'.]

The wild rocket lent a peppery kick and slight bitterness to the 'open faced sandwich' and made it even better (wished there were a few more rocket leaves).  [#Tip: In fact, the rocket leaves are bigger than the usual narrow leaves I'm accustomed to eating....and it tastes a lot better too as it packs a more intense flavour.] 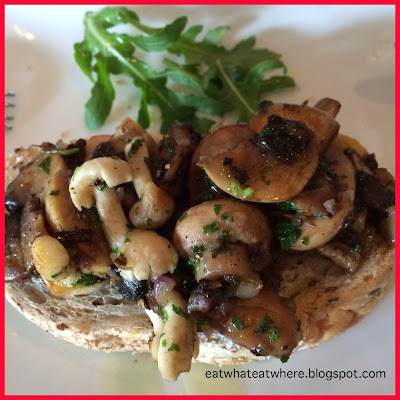 Although many would probably complain about the portion size (for the price charged), I was ok with it as long as it tastes good.  We do have to bear in mind the quality ingredients used as white truffle oil and shimeji (+ portobello) mushrooms are not cheap ingredients.  All in all, it was simple but appetising! 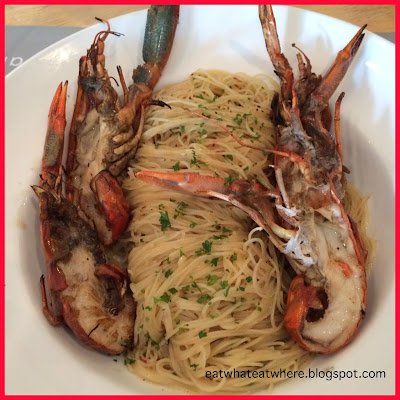 Our other order, from the pasta section, was the Angel Hair Aglio Olio @ RM42 that came with grilled yabbies' (or crayfish).  Angel hair pasta is a very thin variety of pasta and very easy to overcook.  Alexis's angel hair pasta, which was tossed in extra virgin olive oil, chilli flakes and chopped fresh parsley, was cooked just right.  It was flavourful, with a spicy kick from the chillies, and not overly oily (and I've eaten many oily pastas in my lifetime)....but this was one good pasta!

The yabbies, on the other hand, was lightly seasoned and grilled, though it could do with a little bit more seasoning and a little bit more grilling (but that's just me being picky).  [#Tip: Yabbies are like a smaller version of the lobster.]  The portion size was good as it came with 5 pcs of yabbies that have been cut in half lengthwise (ie. from 2 1/2 whole yabbies) and a sizeable amount of pasta which was more than enough to fill you up. 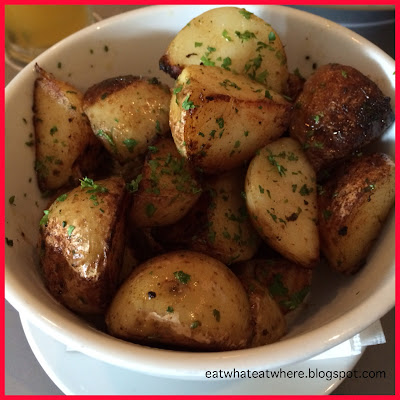 I also ordered a side of Roasted Potatoes @ RM13 for sharing.  My son, who normally only likes potatoes deep-fried and done in the form of fries, chips or wedges, found the roasted potatoes to his liking.  The potatoes, tossed in olive oil, butter and parsley, were roasted with the skins on (even more flavourful) and were nicely soft on the inside....it was pretty good for something so simple! 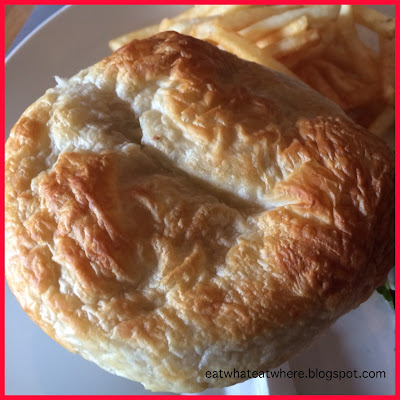 On a separate visit (this time for insurance matters), I had the privilege to sample the Chicken & Mushroom Pie @ RM26 which came with a side of vegetables (radicchio and pea shoots) and fries. 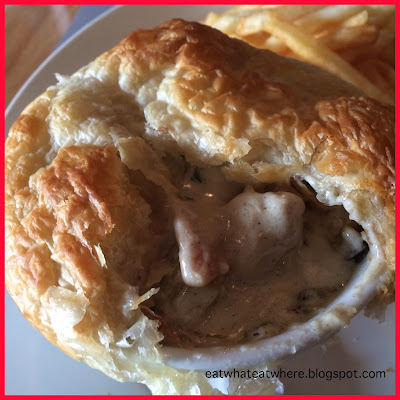 The pie filling had button mushrooms, leeks, onions, carrots and celery cooked into a (white) creamy sauce and topped with an incredibly thin and flaky puff pastry.  You may think that RM26 is rather expensive for a pie but, looking at the ingredients inside the pie, it's not.  There was a fair bit of chicken chunks and loads of softened vegetables and mushrooms. 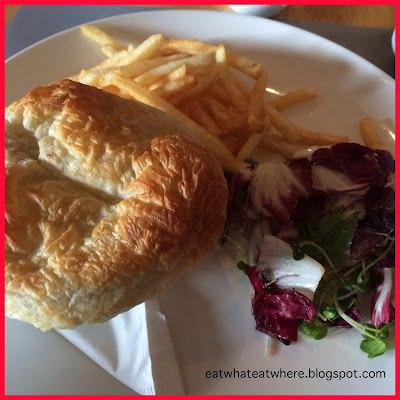 The side of vegetables was much needed, especially the radicchio which imparted a bitter taste to cut through the richness of the pie filling.  All in all, I found this to be quite filling and (if you're a small eater) you'll have difficulty finishing it. 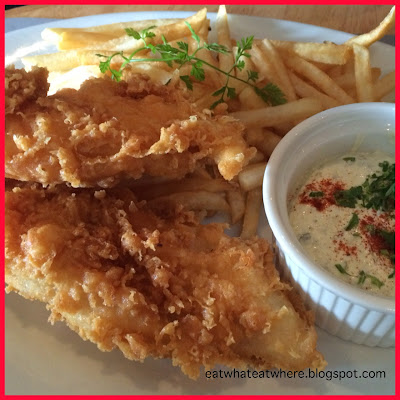 This is the Fish & Chips @ RM34 served with french fries and tartar sauce (with a sprinkle of paprika).  The fish is dory fillet but I found the batter to be a bit thick and not light and airy as it should be.  I didn't care much for the tartar sauce either.  Overall, this was the least impressive dish that we tried. 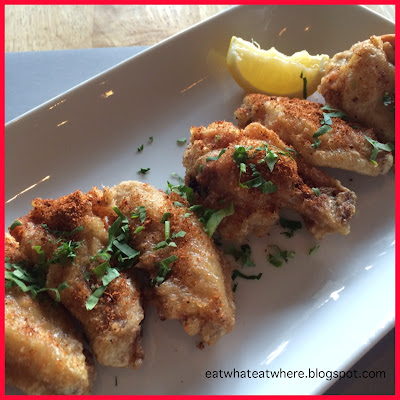 On a recent revisit, I ordered the Chilli-Salt Fried Chicken Wings @ RM17 and, for this price, you get 3 drumettes + 3 wingettes (from 3 whole chicken wings).  This price may seem a bit much for just 3 chicken wings but, let me tell you, these were very good wings. 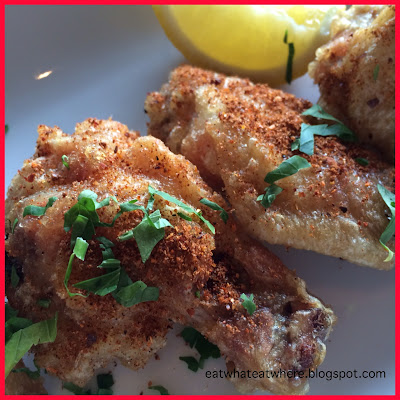 The chicken wings were perfectly fried, with a nice crisp, still tender inside, and (from the colour of the wings) you know it was fried in fresh oil.  The sprinkling of seasoning (salt, paprika, black pepper, chilli flakes?) on top (and a squeeze of lemon) brought our the flavour of the wings.  It was yum! 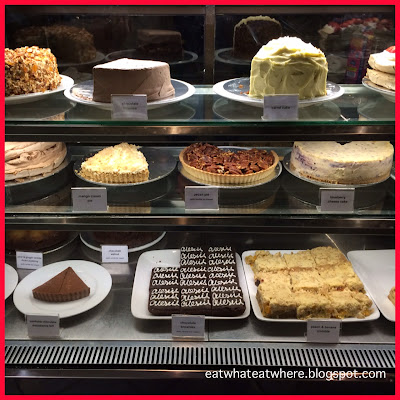 Alexis is also renowned for its cakes, especially their Tiramisu with Strawberry Sauce (which many described as a 'dessert to die for').  Didn't get a chance to taste it coz each time I finished my meal, I'm already too full to down a piece of cake by myself (as theirs come in quite a hefty slice and with quite a hefty price as well) unless you can share with someone (who likes cakes).  I guess if I really want to try one, I've to just come for the cakes (and nothing else)! 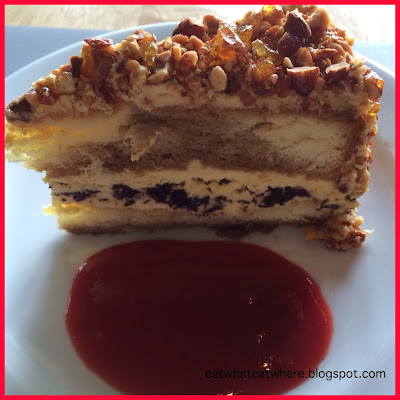 On that note, I did return for their Tiramisu with Strawberry Sauce @ RM16/slice.  The description "warned"...Tiramisu with Cognac (in case you can't take liquor) but (not to worry) the cognac taste was practically non-existent. 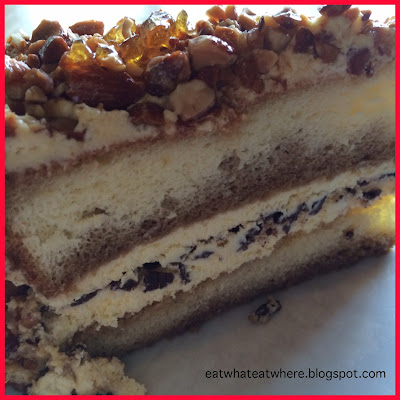 Was it the best tiramisu in town?  Some would vouch that it was, but let's just say...it was different.  It didn't look like the typical tiramisu that we're used to (especially without the cocoa dusting on top).  Instead, Alexis's version had an outer crust of caramelised crushed almond praline (not pecans, not walnuts...it's almonds) which brought a crunchy texture to the cake.  The cake was not overly sweet provided you don't bite into the bits of hardened sugar syrup (part of the praline).  It also didn't have the intense coffee flavour (that I would have preferred) but the bits of chocolate (sandwiched between the mascarpone cheese) was a nice touch. 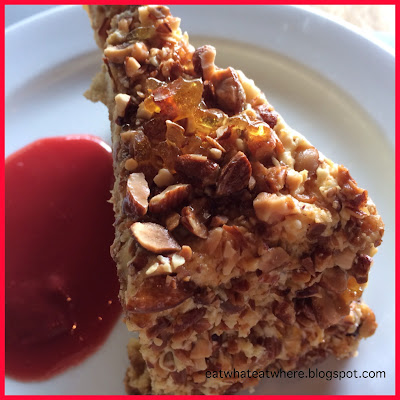 Some say the strawberry sauce was not needed but I beg to differ coz it added a much needed tangy taste to cut through the richness of the cake.  I lapped up all the strawberry sauce.  Overall, it was still a very good tiramisu cake...just different!  It kind of reminded me of the one I ate at Top Hat Restaurant.
Here's our drinks (a sizeable glass, I might add): 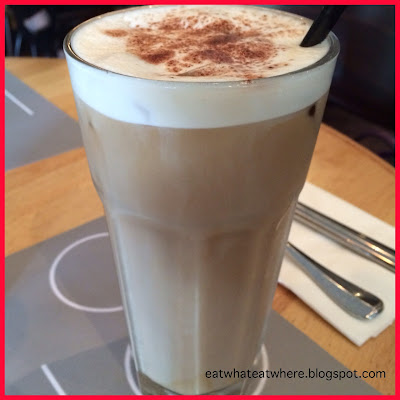 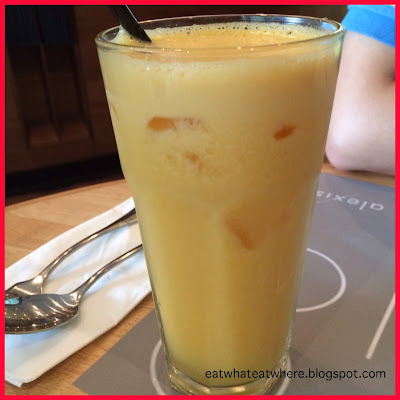 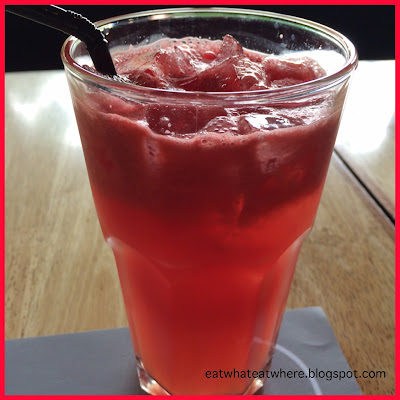 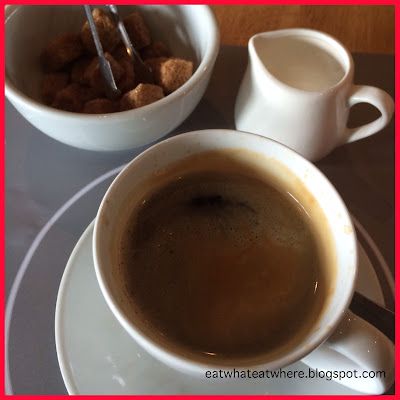 and the House Brand Coffee @ RM10
My Personal Opinion
Alexis serves pretty decent food but a meal here can easily set you back at least RM50 (or more) per person.  Though prices may be a bit steep, it's because quality ingredients are used here.  If you're looking for a more reasonably priced meal, they have 3-course set lunches available between RM35 - RM38++.
They seem to be more popular for their cakes though judging from the many good reviews from food bloggers.  The cakes do look very inviting but I've not had the opportunity to try any...perhaps next time!
The place deserves a return visit.....even if only for the cakes!!
Likes:  Mushroom on Toast and the Chicken & Mushroom Pie.
Dislikes:  If there's one thing they need to improve on is their service needs to be more attentive.  Both times I was there, no-one was there to greet us at the entrance or show us to a table.  I had to walk in and practically find my own table.  Drinks took a while to arrive too.  Settling of bills was slow even when it was past peak hours.
Alexis Bistro
G10 & 11 Ground Floor
Great Eastern Mall
303 Jalan Ampang
50450 Kuala Lumpur
Tel: 03-4260 2288
Posted by contact.ewew at 09:48