I've passed by this cafe so many times when I'm out for food not knowing what kind of food they serve.  The fact that my view was obstructed as I couldn't really see through the glass door didn't help its cause. 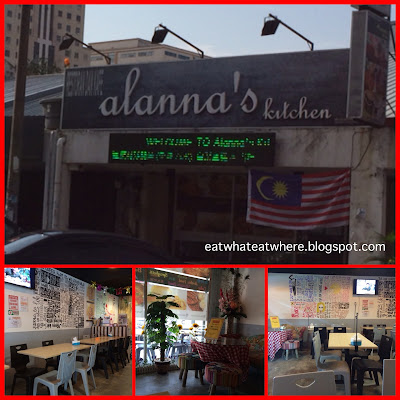 One day, I finally made the move to step inside Alanna's Kitchen @ Pandan Indah and was greeted with a small cosy, air-conditioned cafe (not something I was expecting from the looks outside).  That was about 4 months ago when in actual fact the cafe has been around for 3 years already. 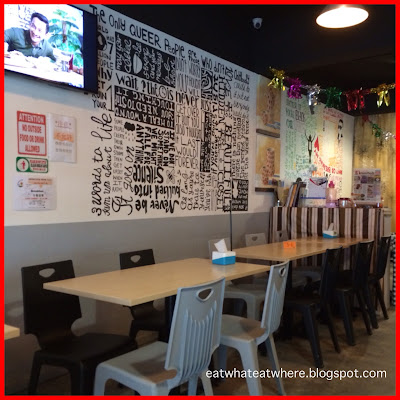 The owner of the cafe is a very friendly Chinese lady with Muslim workers serving halal food.  She told me her speciality is Arabic food to which I replied I don't think I'd like Arabic food.  She said that's what most of her customers said but end up liking it in the end.  It's probably not truly authentic Arabic food but one that has been tweaked to appeal to local tastebuds.  Western food, Asian delights and some all-day noodles/rice dishes, snacks and desserts (cakes & waffles) round up their menu. 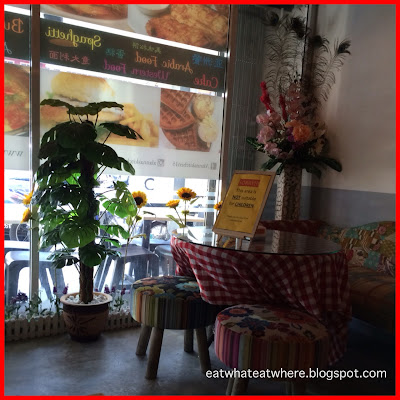 The first time I came here was in the morning.  Although their breakfast menu is very limited, I was shocked when I saw the prices on their menu.  Shocked in a good way, that is....their breakfast is not only priced at RM5.50 - RM6.50 but it comes with a free drink as well! O_o  Talk about cheap...a bowl of noodles and drink at a coffee shop would easily cost more than RM8. 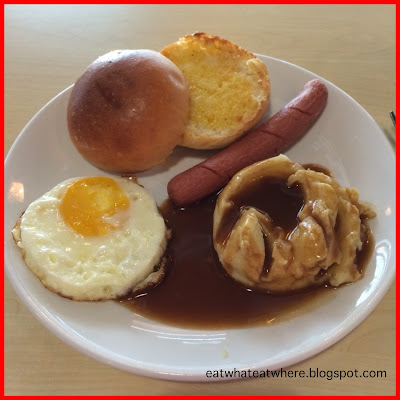 Breakfast Set A @ RM5.50 has a soft bun that's always well toasted and generously buttered.  I was surprised by the mashed potatoes with brown sauce (which I enjoyed) as it wasn't something I expected to see in this breakfast dish. 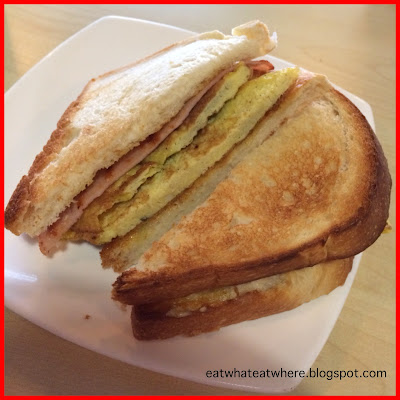 Chicken Toast & Egg Sandwich @ RM6.50 may be a simple egg and ham sandwich but look at just how generous the thick omelette filling is. 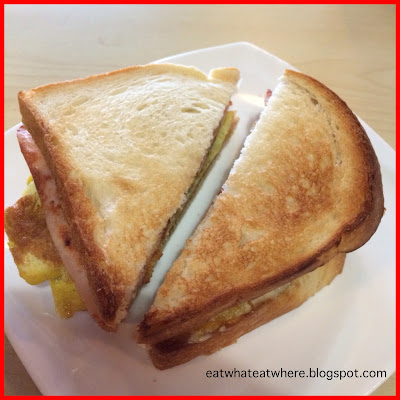 I have these simple breakfasts (especially these first two) quite regularly because of the ridiculously low prices. 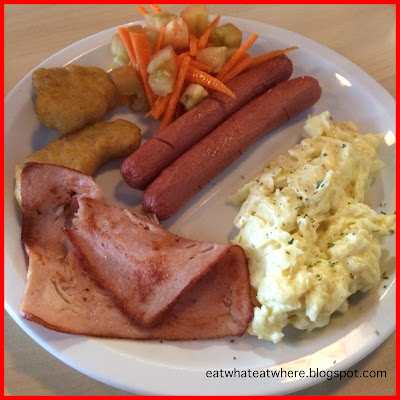 All Day Breakfast @ RM9.90 with processed sausages, ham and nuggets is bound to please a typical young child. 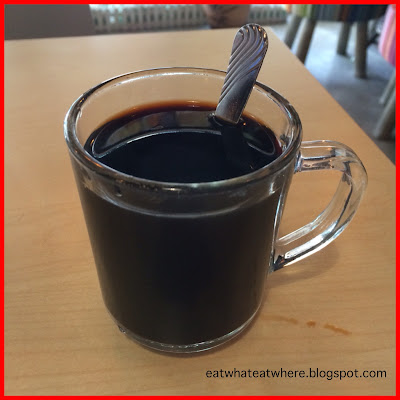 Although the taste of these western breakfast options ain't all that good as they come with commercially-produced ingredients, I have no complaints whatsoever because of the price.  Where can you get to enjoy a breakfast at that price with a complimentary drink as well...and get to eat it in a comfortable air-conditioned environment? ^_~ 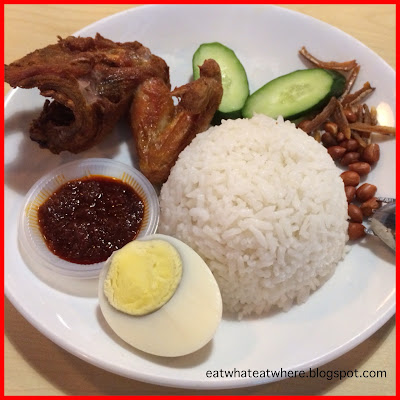 If western breakfasts aren't your style, there's the Nasi Lemak Breakfast @ RM6.50 with a surprisingly decent sambal.  It comes with a fragrant piece of fried chicken wing.

Having been impressed by the value of their breakfasts, we decided to check them out for dinner too, usually on weekdays when I don't cook. 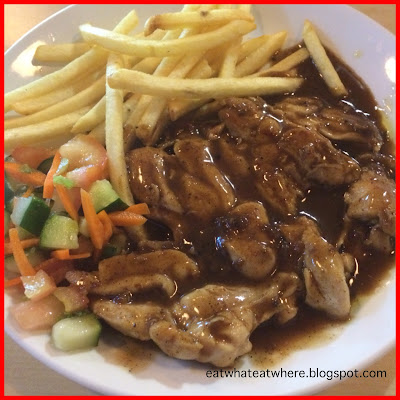 From their western menu, I usually order the Grilled Chicken Chop with Black Pepper Sauce @ RM11.90 served with store-bought frozen fries and some chopped vegetables (of carrot, cucumber and tomatoes). 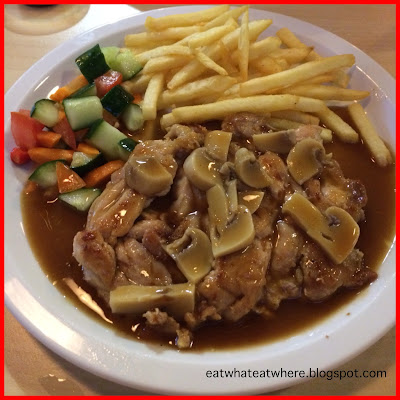 Sometimes I'll have the Grilled Chicken Chop with Mushroom Sauce @ RM11.90.  The mushroom sauce actually taste like the brown sauce (in the mashed potatoes) with the exception of some chopped canned button mushrooms. 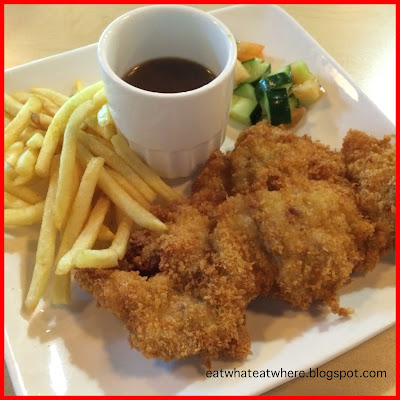 Then there's the Fried Chicken Chop with Brown Sauce @ RM14.90.  Of the three, the grilled chicken with black pepper sauce is your best bet here. 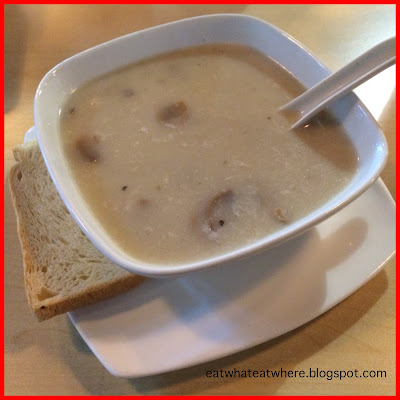 I have to say the grilled chicken chops aren't a very big portion (but that's forgivable seeing that it's only RM11.90), so we would pair it sometimes with a Homemade Mushroom Soup @ RM7.90 if we're extra hungry. Unfortunately, the only 'homemade part' were the extra canned button mushrooms they sliced and added to what tasted exactly like store-bought canned (Campbell) soup.  But, if you're too lazy to even open a can, having someone heat it up for you isn't such a bad idea after all! ;P 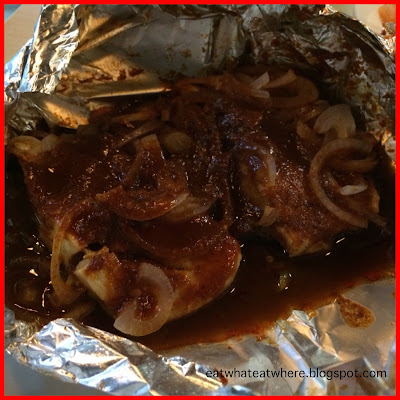 From the Asian Delights section, I tried the Grilled Sambal Fish (Seabass) + Rice @ RM13.90.  Based on the description, I thought I was getting a sambal marinated grilled fish but the fish came wrapped in foil instead. 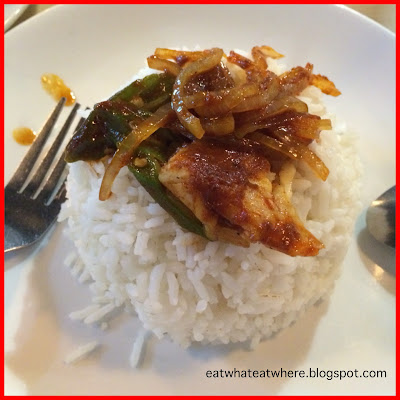 The fish was cooked with ladies fingers and onions in a very spicy sauce.  Just eating the fish meat without taking the sauce was already too spicy for me (but the spiciness did its job of camouflaging the slightly fishy taste).  Not something I'd order again.  There's a cheaper option with kembong for RM11.90. 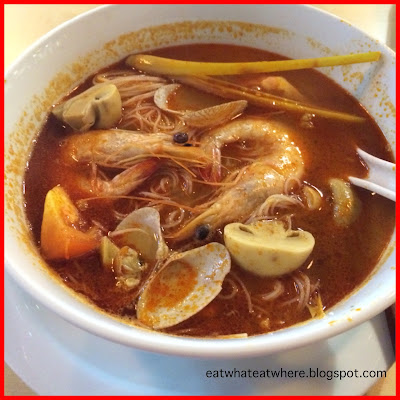 The Seafood Tom Yam + Meehoon @ RM17.90 is one of the more expensive items on the menu.  The seafood were two fresh prawns and some la-la only (I was hoping for some squid) besides the canned button mushrooms.  The taste of the tom yam was quite one-dimensional and it was more spicy than sour. 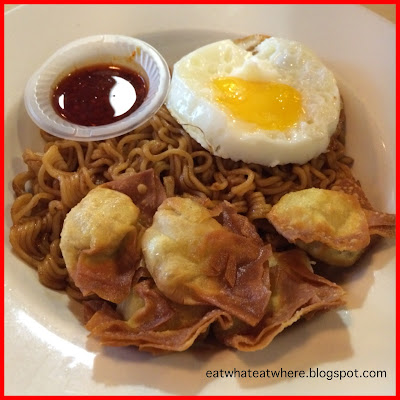 The Dry Noodle with Wanton @ RM7.90 was basically instant noodles tossed in sauce served with (five!) fried wantons and a fried egg.  It's nothing special really but the sambal that accompanied the noodles was quite nice.  You can opt for the same noodles with sausage and ham for RM7.50. 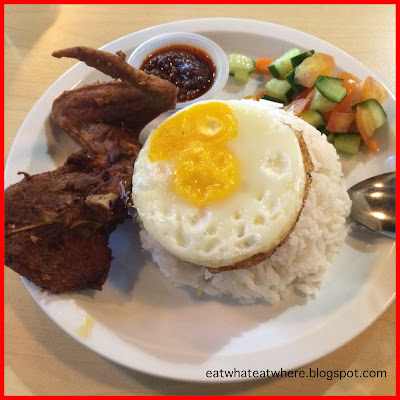 Some of the other simple rice dishes include the Fried Chicken Wing Rice @ RM8.90 which gives you the same fried chicken (from the nasi lemak) + egg and veggies.  I did enjoy their fragrantly fried but slightly dry chicken wings. 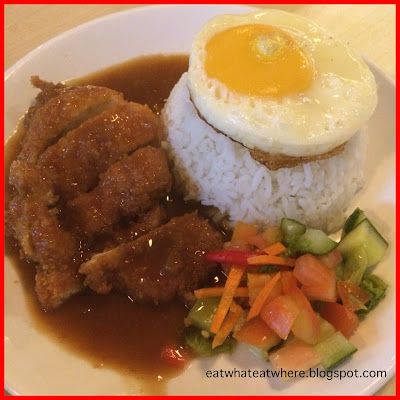 Then there's the Crispy Chicken Rice @ RM8.90 with crispy chicken (doused in brown sauce which I think is the same one as the mashed potatoes) + egg + veggies. 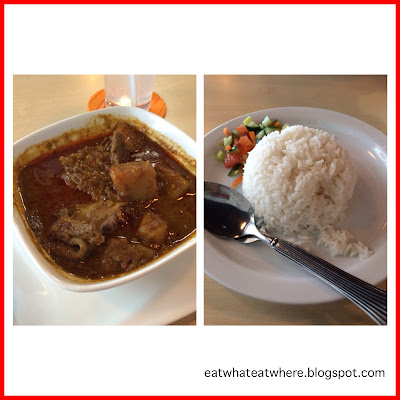 The Spicy Curry Chicken Rice @ RM9.90 with chicken and potatoes was very similar to the taste of an Indian curry, heavy on curry powder and spices.  It was also true to its name....too spicy for me. 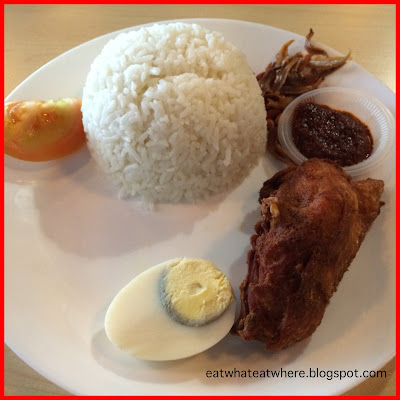 The Nasi Lemak Special @ RM8.90 features a chicken thigh instead of wing (that comes with the cheaper breakfast version) and it's available all day long.  When it comes to cheap food, presentation isn't their strong suit...but what's with the wedge of tomato?  Must have run out of cucumbers for the day. 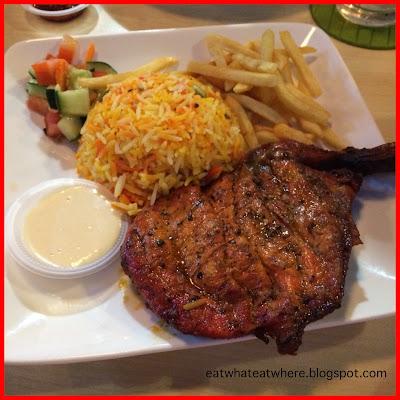 Since Alanna's speciality is Arabic food, we decided to give it a go just to see if we like it starting with the Arabic BBQ Chicken + Rice @ RM14.50 accompanied by long grain rice spiced with cloves, cardamom and black peppercorns (that almost mimics nasi biryani), vegetables and fries.  The chicken breast was well marinated with lots of spices though on the dry side but still edible. 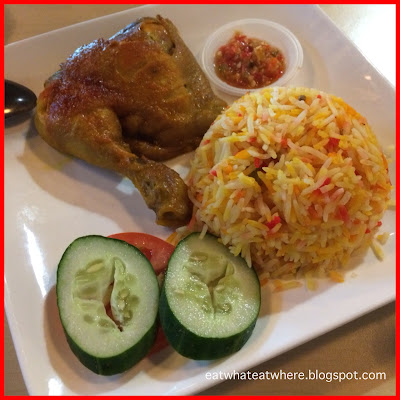 The Arabic Chicken Mandy + Rice @ RM13.50 featured oven-baked chicken served with a fresh chilli dip that was very spicy.  The chicken felt like it was parboiled first before being baked, so the meat was overly soft with only a slight crisp on the chicken skin. 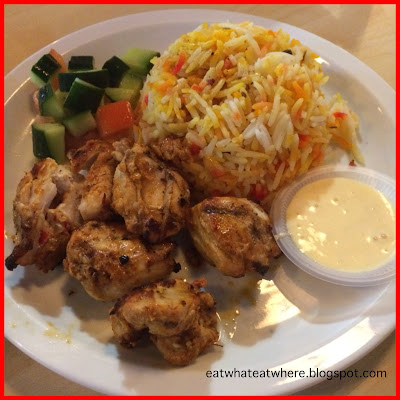 Actually, the most commonly used spices in Arabic food like cloves, coriander, cinnamon, cumin, cardamom, nutmeg, paprika and black pepper are also common to Indian food, so we found the flavours rather familiar and acceptable.  The Shish Tawook Grilled Chicken + Rice @ RM13.90 were large nuggets of grilled boneless chicken with lesser spices than the Arabic BBQ chicken. 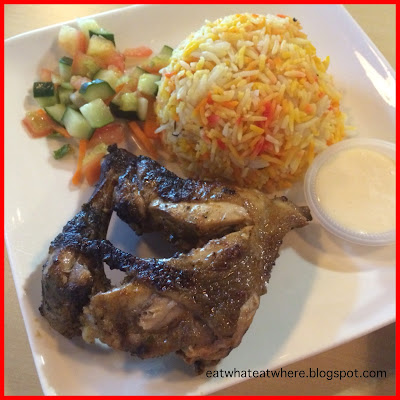 Alanna's Special Grilled Chicken + Rice @ RM15.90 was a chicken thigh (don't ask me why the thigh is odd-shaped like that!) grilled over an open flame served with the same yogurt dip (I think, which I didn't taste) as the two previous dishes. 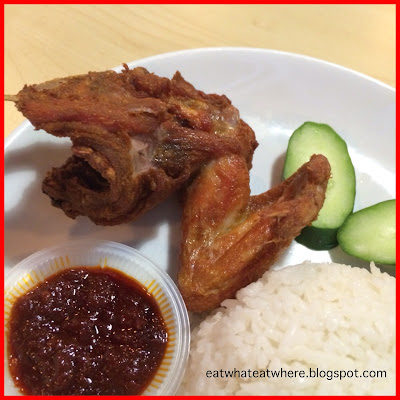 In general, the chicken used in Alanna's Kitchen is smaller than our usual farm chickens.  Could they be what we call Malay chicken (ma lai kai)?  The smallish size reminded me of Nando's chicken! >.< 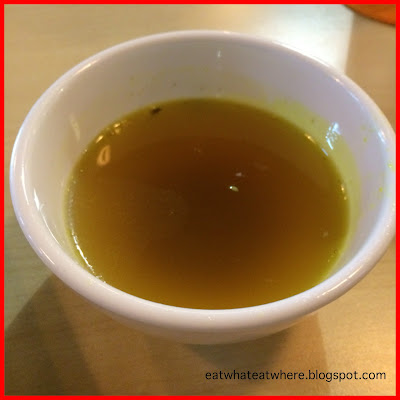 Most of the dishes come with a complimentary soup which I disliked as it had a very strong hint of a particular spice.  I tried to guess which spice (I'm thinking either cardamom or clove) and then one day, I found a cardamom pod in the soup, so there. 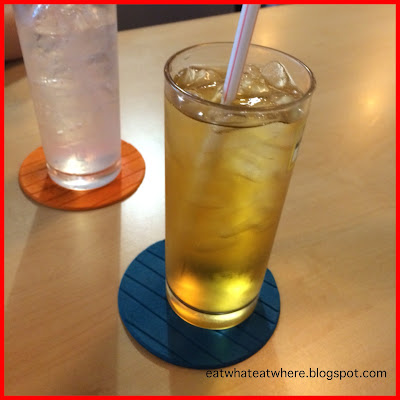 You also get a complimentary drink of your choice (my default is always coffee or jasmine tea but you can also have teh, isotonic drink, ice lemon tea or carbonated drinks) with any meal ordered....and that's the reason why the meals here end up being so affordable as you don't need to pay for a separate drink.

Although the simple food isn't something you'll need to make a special trip here for, it does offer those living in this neighbourhood an option to eat out on the cheap when we choose not to cook.

Some of her menu items may not be worth exploring altogether but there are some that are adequately edible like her grilled chicken chops, Arabic food, nasi lemak and her absolutely value-for-money breakfast sets.  Do note that in my most recent visit just two days ago, I saw a newly printed menu and when that happens, it usually means either new menu items and/or increase in prices.  So, some prices have seen an increase of between 40 cents - RM1 but even so, prices still remain truly affordable here.

The friendly nature of the lady boss and the demeanour in which she interacts with her customers clearly shows that she knows many of them as her regulars.  Again, for the low prices charged (where else can you get a meal + drink for around RM10 and then get to enjoy that in an air-conditioned environment), I don't think there's cause for complaint! ^.^