I've been reading quite a few reviews on this place lately from the food blogs I follow.  And finally when a newspaper write-up appeared in The Star, it hastened my desire to try out the place...sooner rather than later. 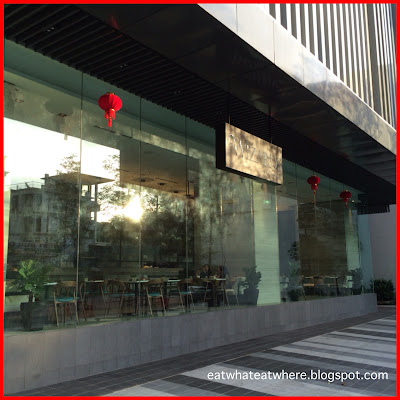 The place I'm referring to is Wizards at Tribeca @ Jalan Imbi.  This barely two-month old cafe (opened in mid-January) is located on the lobby level of Tribeca Bukit Bintang, a luxury serviced residence in the heart of Kuala Lumpur. 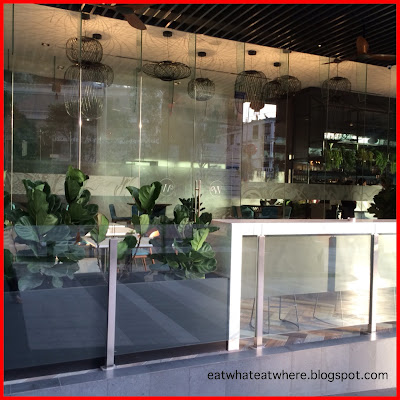 Knowing that Wizards at Tribeca is opened by the same people behind Yellow Brick Road and The Red Beanbag and reassured by the standard of food at both places, I needed no convincing to visit their new cafe. 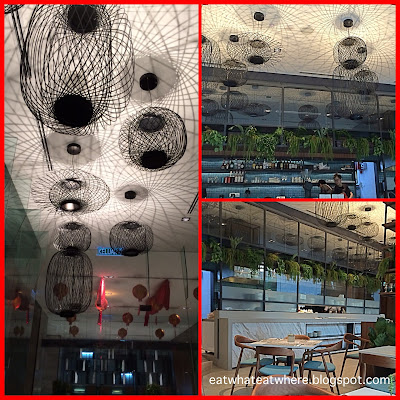 Enroute to the cafe, I second-guessed myself and thought it was probably a bad idea as I made my way here on the very Saturday the article appeared in The Star.  Based on the good reviews, I expected the place to be crowded based on my experience with their previous two cafes where queuing for a seat was commonplace. 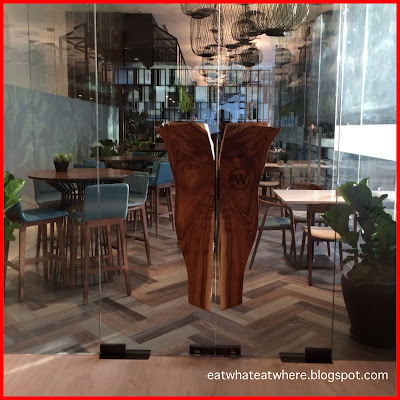 So, imagine my surprise to find no crowd whatsoever at peak dinner time on a Saturday...yay!  Perhaps, the place is new and still under the radar or their peak time is earlier in the day since they're more well-known as a brunch cafe. 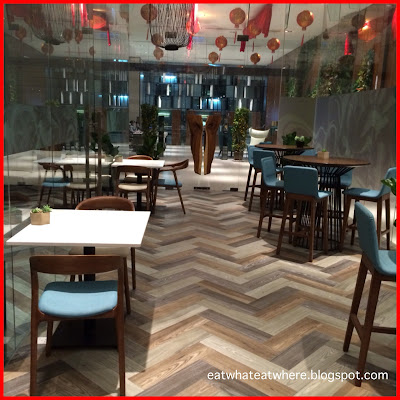 Walking in, I was immediately taken in by the interior straight away...with loads of natural light filtering in through the floor to ceiling glass walls.  It has a classier vibe than its predecessors (Yellow Brick Road & Red Beanbag) but welcoming at the same time with its understated elegance. 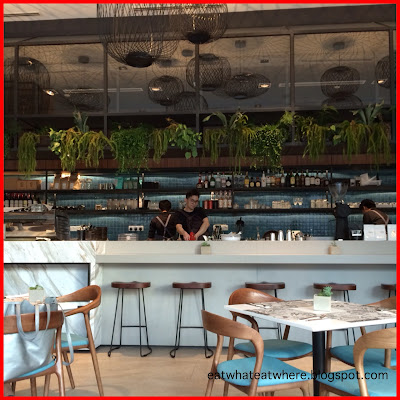 Love the green aspects with the potted and hanging plants.  It reminded me somewhat of Botanica + Co, especially the printed (paper) table mats, but with a little less spaciousness and lush greenery. 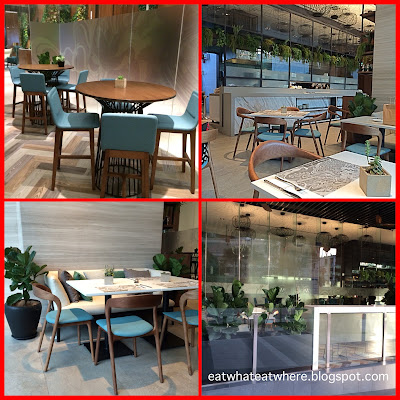 The cafe has four distinctive well-thought out sections...the front area with high chairs and tables for coffees and quick bites possibly, the middle section with tables-for-four and two larger tables with sofas for a more laid-back dining, the back section with seating to accommodate bigger groups and a small al fresco area. 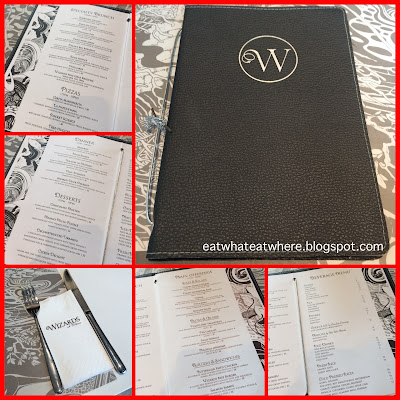 The Brunch Menu of 'egg-centric' dishes is available from 10am - 6pm with pizzas, soups & salad, pasta & grains and burgers & sandwiches and desserts offered from 12pm - 10pm.  A limited Dinner Menu is introduced from 6pm. 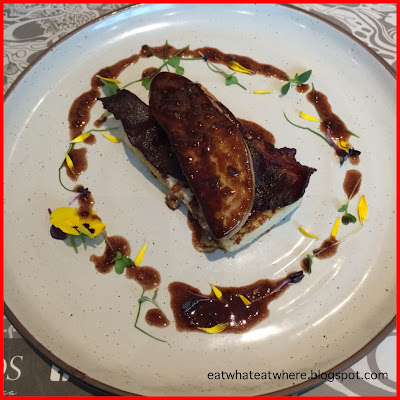 One item from the Brunch Menu that's available all day is the Wizards Foie Gras Brioche @ RM44...whoopee..for which I was already eyeing.  Foie gras is kinda an acquired taste, I think, and you have to truly be a lover of liver to enjoy foie gras.  Well, I love chicken liver and I love pork liver, so I guess I love duck liver too...hihihi! ^_~ 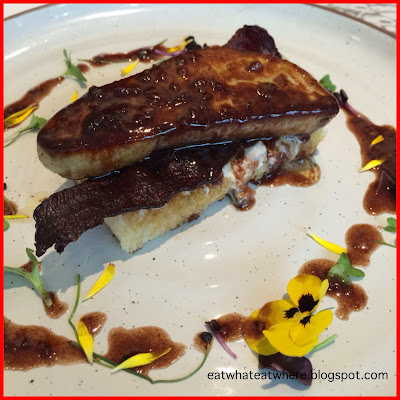 This well seared foie gras was served with crispy beef bacon on top of a fluffy brioche (I wished there was more bread) with creamy duxelle mushrooms and a mixed berries reduction.  Many will say that the portion is small but I think it was a generously thick slice of foie gras for the price. 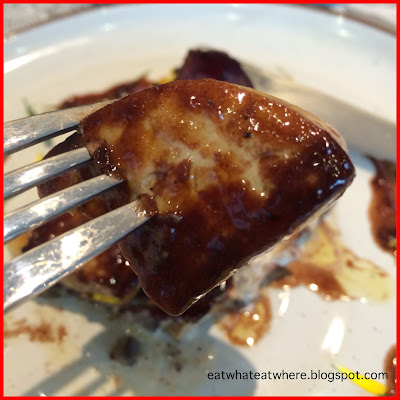 Plus, you don't really need a big portion coz it's so rich and buttery....made richer by the duxelle mushrooms in a very creamy sauce.  It's so rich you can share...yes (you heard right)...share...a little goes a long way. All you need is just a little to give you that heavenly satisfaction.  I would have liked to see a bit more greens to cut through the richness of the foie gras though. 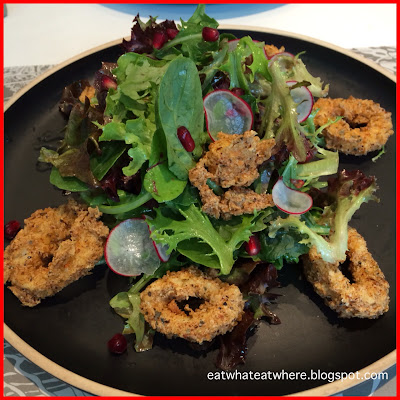 After a rich dish like that, I was glad I ordered a salad...which I don't normally do when eating out.  I guess there was one thing in the salad that was calling me to "mari" (come), aptly named Cala-Mari @ RM28. 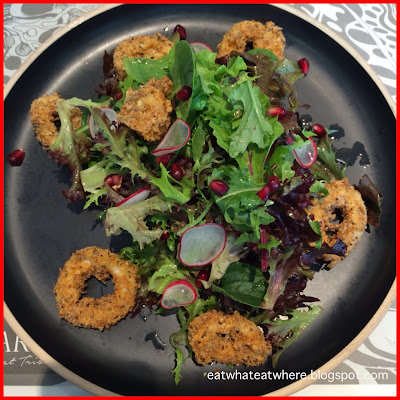 It's a salad filled with herb crusted squid rings, pomegranate seeds and thinly sliced red radish and tossed in a champagne vinaigrette.  Visually, the salad was very appealing and the colours truly popped with its vibrant red and green. 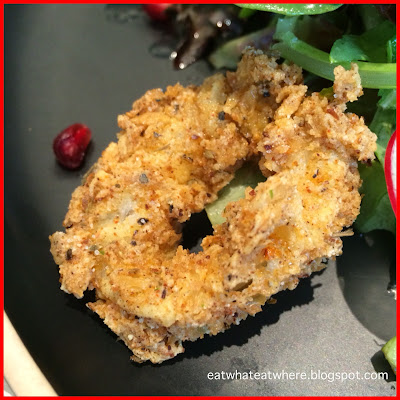 I tasted thyme in the crunchy herb crust along with probably parsley, chilli flakes and some other herbs while the squid rings were tender with a crisp crust. 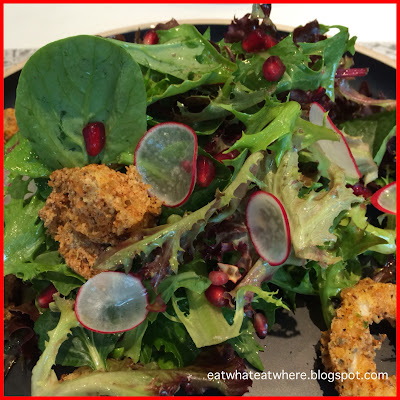 I have to say this was one of the freshest salads I have eaten.  The crisp greens were at its optimum freshness with the crunchy sliced radish and burst of sweetness from the pomegranate seeds.  The light and fresh taste of the champagne vinegar made this a genuinely refreshing salad to eat.  No regrets ordering a salad for once! ;) 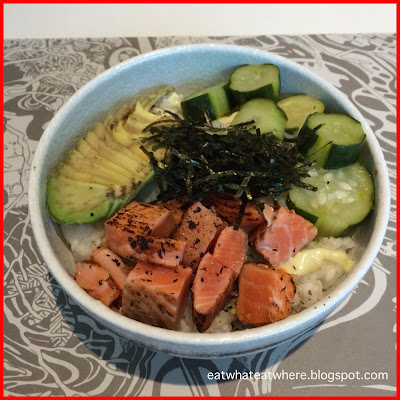 Our other dish was the Sally Bowles @ RM32 from the Pasta & Grains section featuring a tataki salmon rice bowl with avocado, pickled cucumber, seaweed and onsen egg. 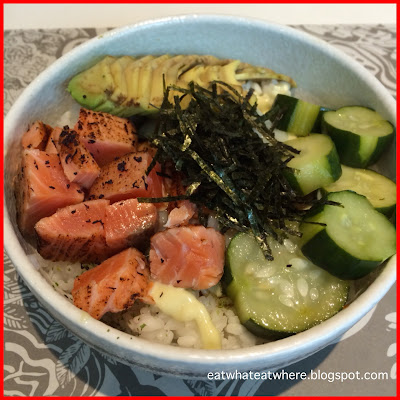 The salmon, done tataki style, was fresh and raw in the centre with lightly charred sides for a smoky aftertaste.  This is almost like a poke bowl in terms of taste and texture with the onsen egg coating the rice grains together with a light drizzle of mayo and wasabi (wished they had mentioned about the wasabi upfront as it isn't something that everyone likes). 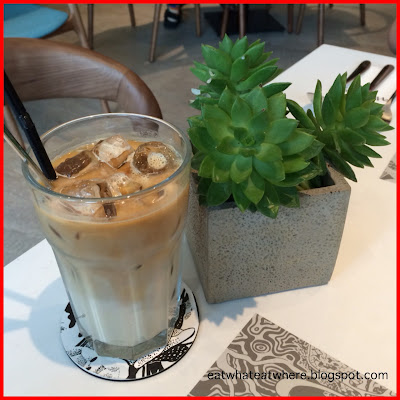 With their excellent coffees at Yellow Brick Road and Red Beanbag, the coffees at Wizards should be nothing short of great too...and my Iced White Coffee @ RM13 was just that. 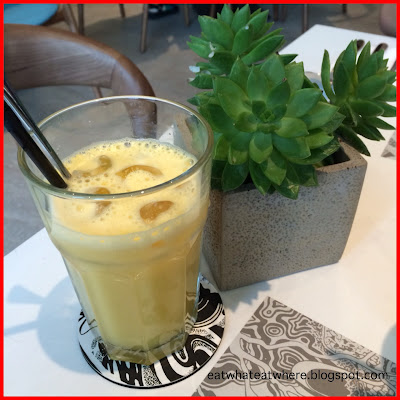 If the Fresh Orange Juice @ RM16 looked like it wasn't filled to the brim...well, that was because we asked for less ice. :P

If there was something I wasn't so thrilled about....wait, hold your horses, it's not the food nor the ambience, it would be the parking at Tribeca Residences.  You see, they use this two level parking system (that I detest).  The space is tight and inconvenient for getting in and out of your car (watch your head if you're a tall person!)...and, worst still, the per entry rate is RM8 on a Saturday night :(

From what I've tried so far, I don't know what wizardry they used but they've magically got themselves yet another sure-fire winner! ^.^

I'm sure I'll be back....perhaps earlier the next time to savour their breakfast and brunch items.