We all know how Taiwan's Original Cake took Malaysia by storm when it first opened here to insanely long queues in Sunway Velocity.  They have since added two more branches in Klang Valley, one in Johor, another three in Penang and recently in Singapore.

So, why did a simple egg sponge cake stir such a craze for them?  It's not as if they're something new, after all the Japanese castella (sponge) cake has been around for some time already.  I guess people love the appeal of the large cake being unmolded and cut right in front of you while the smell of egg aroma fills the air! ^_~

It has been 9 months since the first Original Cake opened shop (has it been that long already?)...and I have not eaten it...still.  I guess I'm not one of those who would be willing to queue for 2 hours just to be among the first ones to try and then blog about it.  I'll eat it when I want to eat it. 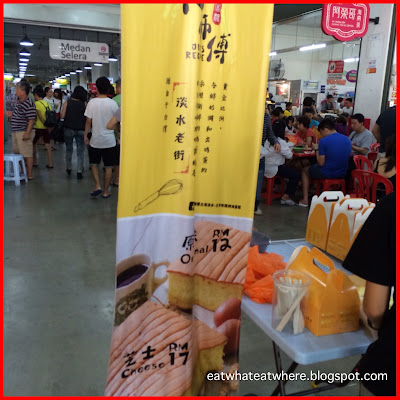 So, when I was at ICC Pudu to feast on my beloved curry laksa, I chanced upon this stall (right at the entrance) selling egg sponge cakes.  I was into some egg sponge cake that day, so why not. 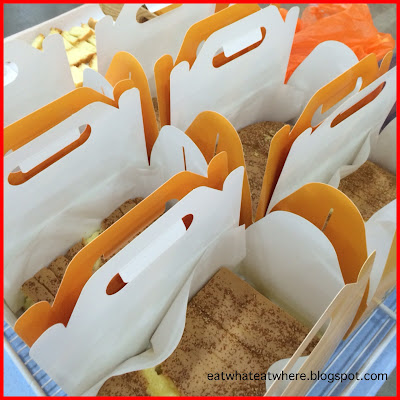 It was just a stall simply set up with just a table filled with some boxes of egg sponge cake.  Taking a peek into the boxes, I could see that the sponge cakes on offer look similar to those Taiwan Original Cakes. 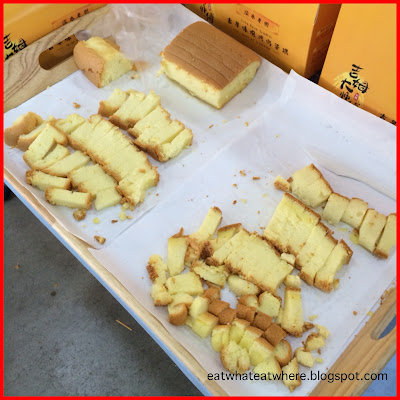 She gestured me and offered me a piece to try from her tray of small pieces of cake meant for sampling.  I tried the original flavour and placed an order for one.  The cakes are baked on-site (from a space inside Hailam Cafe on the left in ICC Pudu). 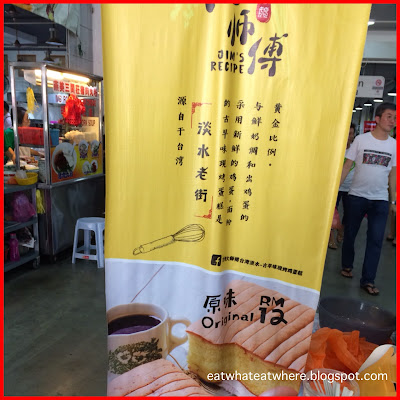 From the standing banner, I gather that this is Jim's Recipe of egg sponge cakes...and I could see that the original is priced at RM12 while the cheese-flavoured one is RM17. 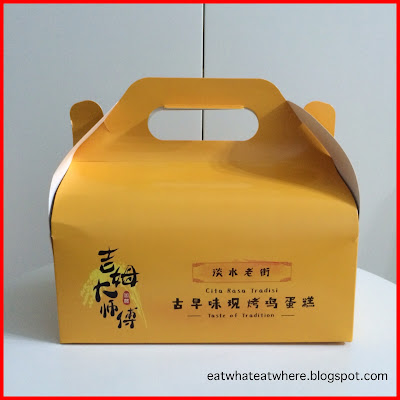 My original flavour (for a Taste of Tradition) came packed in a paper box just like the other egg sponge cakes in the market. 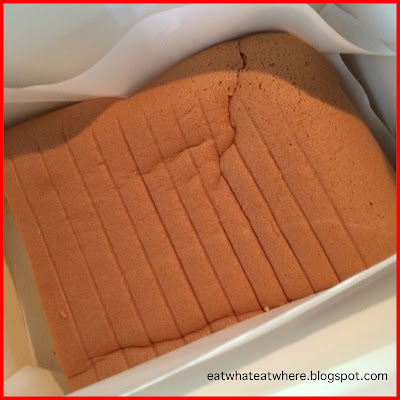 The wonderful smell of the eggy cake aroma wafted through the car when I opened the box (enroute home)....hihihi! ;) 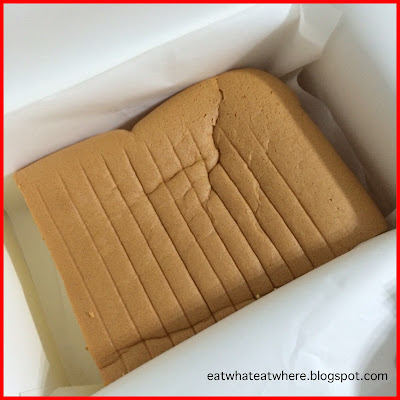 The top of the cake looks similar to that of Ah Mah Traditional Egg Sponge Cake (posted by phonghongbakes recently) as the lines are caused by the wire rack used to unmold the cake. 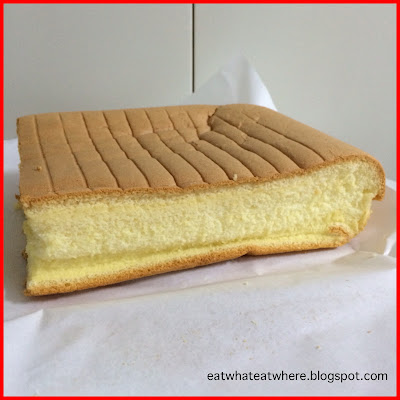 This was what it looked like when I reached home.  First impression of Jim's Recipe Egg Sponge Cake is that it looks a bit deflated compared to Ah Mah's and not as well risen as Original Cake judging from the photos of the latter two I saw online.  The lady seller told me that the cake's height is higher when first taken out from the oven but deflates a bit when it cools. 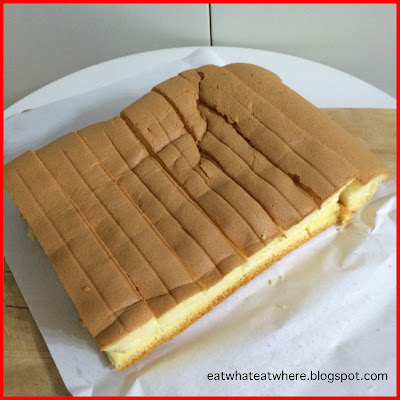 The lines on the surface of the cake made it easy for me to cut them into slices uniformly.  I managed to cut them into 7 slices with each slice slightly more than one inch wide.  That makes the cake about 8 - 9 inches in length. 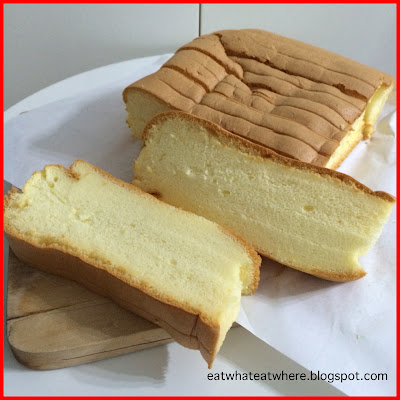 Their facebook lists egg, milk, flour, sugar and canola oil as the ingredients (which is similar to Ah Mah's). The cake was pillow-soft and fluffy, texture wise.  Taste wise, it wasn't sweet at all (and that's coming from someone who has a low tolerance for sweetness), so I think the sweet-toothed majority will find it not sweet enough and thereby tasting bland.  I also thought it could do with a bit more egg flavour since that's the very soul of a good egg sponge cake. 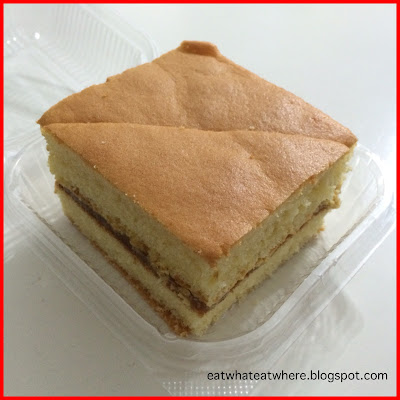 For now, I think I prefer to stick to the egg sponge cake from Mon Kee @ RM2.50 for two slices with a bit of kaya in between! ^_~ 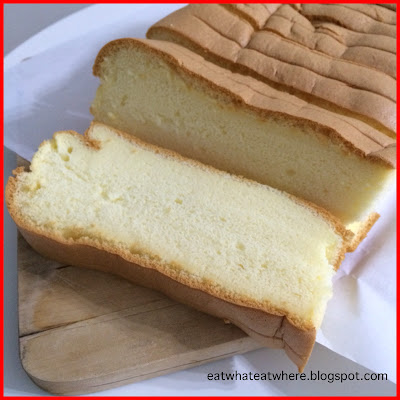 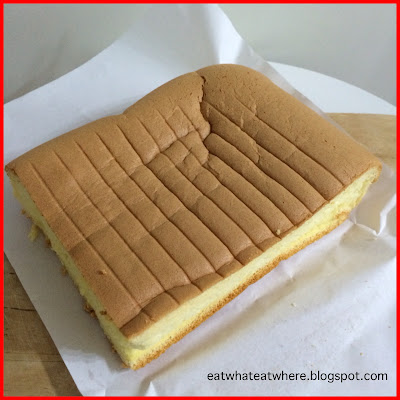 I wasn't aware that Jim's Recipe Egg Sponge Cake was that popular until after I bought one.  From their Facebook, they started about the same time (in April 2017) as Ah Mah Traditional Egg Sponge Cake and now have more than 40 outlets (!) to Ah Mah's 35 and Original Cake's 7 (since February 2017).

It's an ok egg sponge cake but I don't know if it tastes any different for different franchise outlets since there's an insane amount of outlets nationwide.   Plus I can't say much until I've had the chance to try the other two and compare them.

From their Facebook, apart from the original and cheese flavoured ones, they also have chocolate and pandan flavours.  I'm not sure if the one in ICC Pudu is there on a permanent basis coz, on a different Sunday, there was another egg sponge cake stall there (you can check out their Facebook page for an outlet nearest to you if you wish to try).