Restoran Golden Tin @ Pandan Indah has long been my favourite haunt for good "Har Mee" (aka Prawn Mee) coz it's the best we have in Pandan Indah and dare I say it can beat some of the better ones out there too. 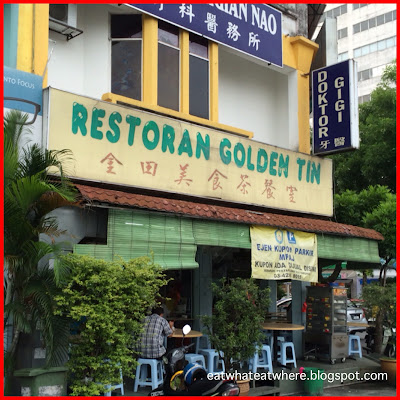 If not for a delicious prawn mee, you won't find me stepping into this coffee shop.  The reason...I don't quite like the elderly lady boss who runs the coffee shop and helms both the chap fan and yong tau foo stalls.

So, let's begin with our little side story first, shall we?

I used to patronise her chap fan stall (and I have to admit her Hakka dishes were the best as it tastes very home-cooked) but she has this annoying habit of using tongs to flip over some of the dishes you've taken to gauge how much she should charge or to check if you have hidden any stuff she can't see! O_o  I stopped going to her stall altogether when I could no longer tolerate her demeanour.  There was even a time when I heard her reprimanding a customer..."lei mou lor sai ngo tik chap" (don't take all my sauce)! @_@

Whenever I'm at the shop having my prawn mee, I'd talk briefly to two of her workers who are overworked (as she don't hire enough staff) but don't complain though I can sense they don't like her very much either. Those two are the backbone of her two stalls, one helping with the cooking of the chap fan dishes while the other mans the yong tau foo stall.  Even if she succeeded in finding help, the workers always end up leaving very soon (which says a lot about her).

With no workers wanting to work for her, she finally sold her shop...lock, stock, and barrel....including the two core workers, the name of the shop and, presumably, the recipe for her yong tau foo (the chap fan stall is now manned by someone else).  You'd thought that was the end of her....no, she set up shop a road away and called it New Golden Tin! O_o  That's the kind of shitty person that she is.  I'm sure the new owners paid her 'goodwill' to retain the name (and recipe) and she opens another (a few months later) with an almost similar name.

In the end, karma got her and she closed shop within a few months (luckily her two hardworking workers didn't follow her to her new place and remained at the current shop till this day).  I don't know the reasons behind her closing but she probably couldn't get workers to work with her (again) with such an unlikable attitude.  Well, I guess she got what she deserved...what goes around comes around! :P 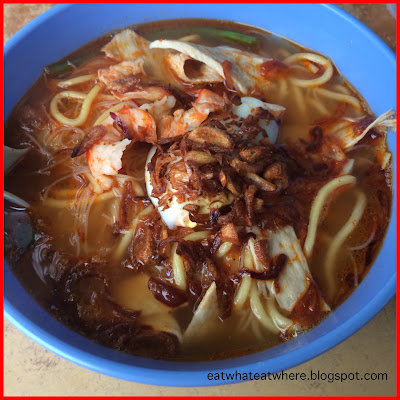 Now, coming back to the food before I got side-tracked, I come here mainly for the Prawn Mee @ RM6 which I'm doing more often now that the annoying old lady is no longer around.  I like the full-flavoured prawn broth (you can see the rich prawn oil around the rim of the bowl), even better with an extra dollop of sambal added, even though the smallish prawns are quite meagre (but we know prawns are expensive these days). 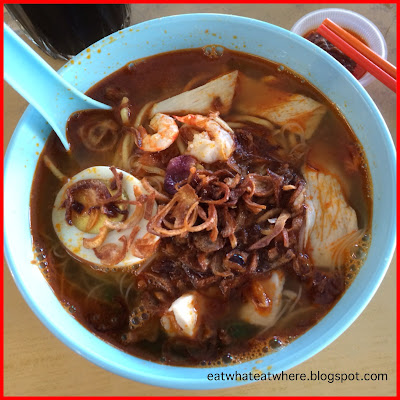 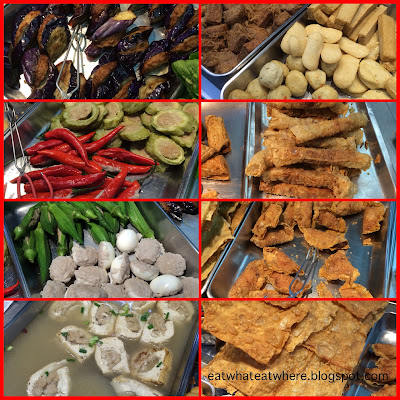 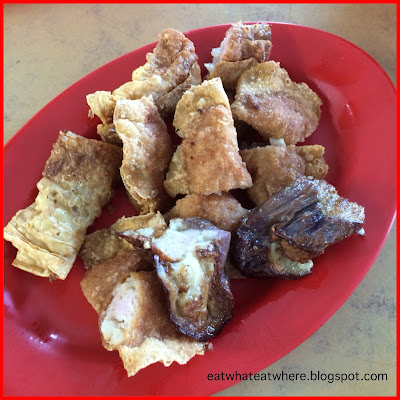 I have to say this yong tau foo is slightly pricier (ranging from RM1.40 - RM1.70 a piece) but that's because the filling is made with a combination of minced pork (that's why!) and fish paste (only a few types are made with just fish). 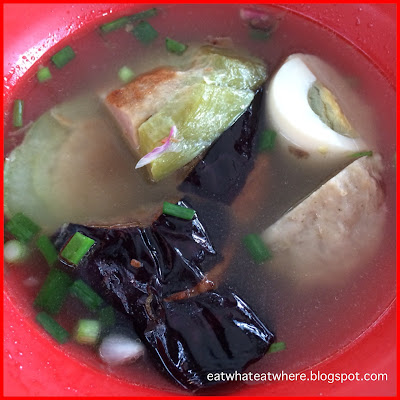 I actually prefer a filling made with both minced pork and fish paste as the pork gives it a more savoury taste while reducing the bouncy texture of fish paste.  Below are some of the yong tau foo on offer. 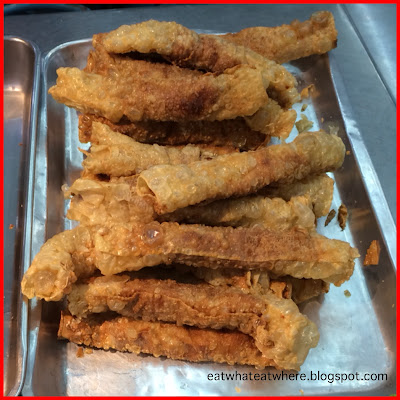 The Fried Fu Chuk Roll @ RM1.70 is one of their most popular items (it's also their most expensive item but at least the fu chuk roll is longer than norm). 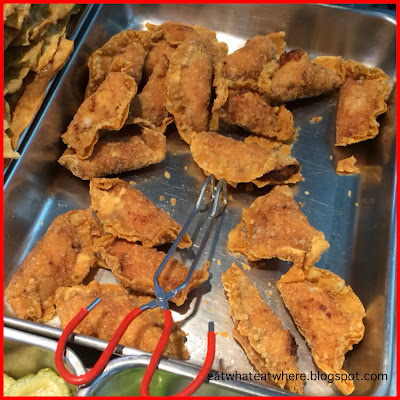 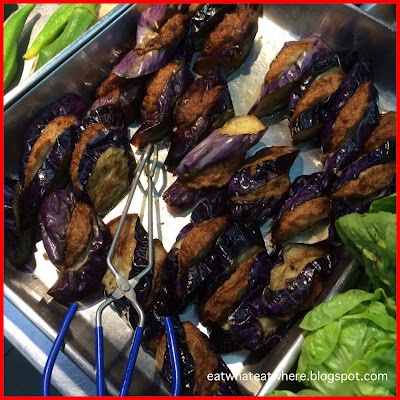 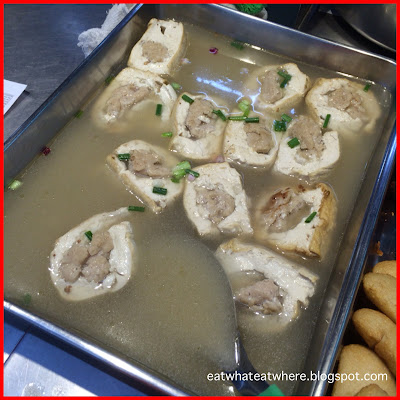 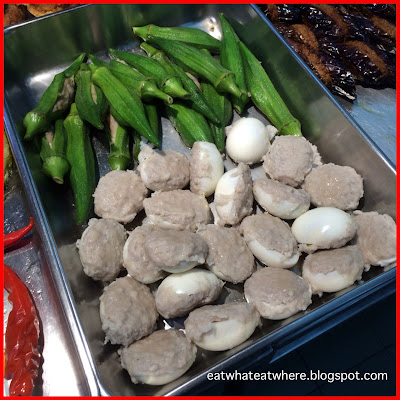 Ladies Fingers & Stuffed Hard-Boiled Egg @ RM1.40.  The stuffed hard-boiled eggs are one of my favourites as I seldom see this in other yong tau foo shops. 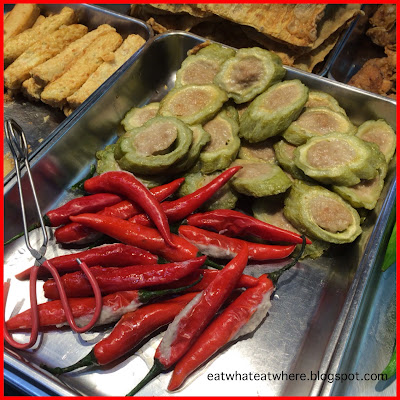 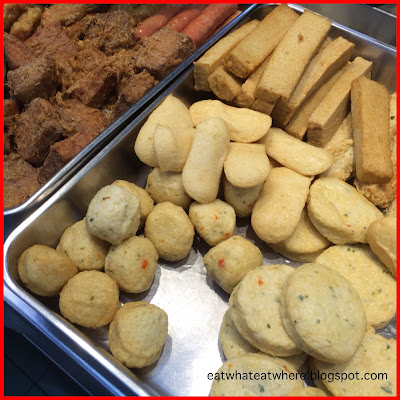 Some Fish Paste Items (which kids will lap up even if they're commercially prepared ones). 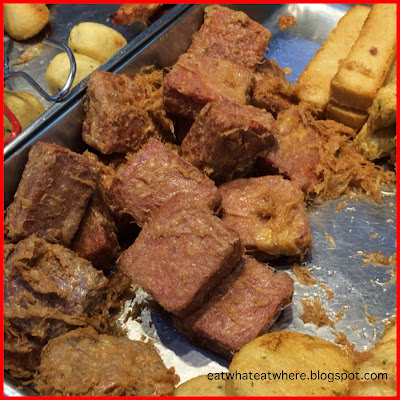 Egg-coated Fried Luncheon Meat (what else can they be other than yum!) 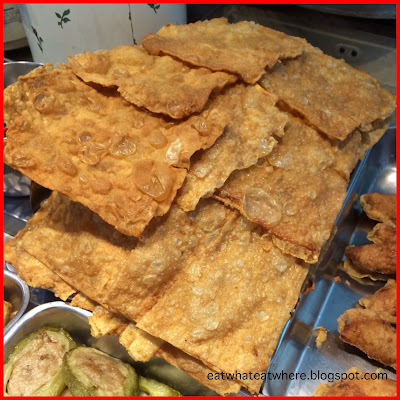 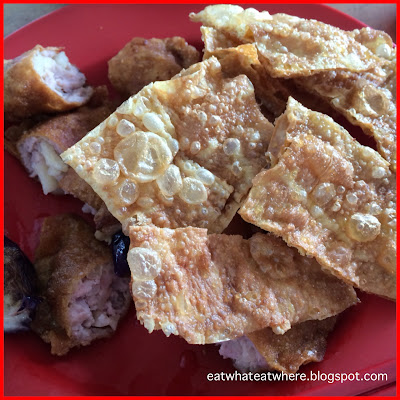 The stall also offers various noodles (and chee cheong fun) which you can have to supplement your meal of yong tau foo. 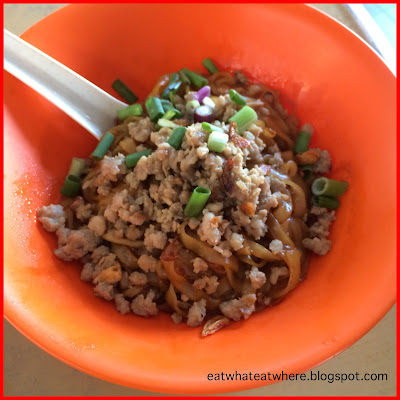 I usually have Dry Kway Teow with Minced Pork @ RM5 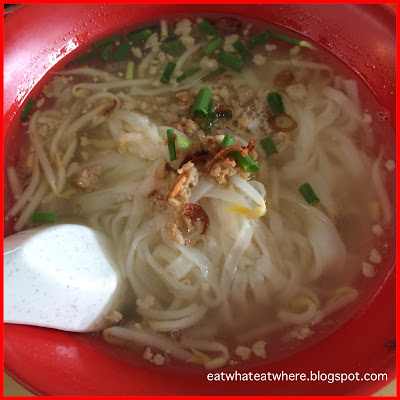 Or the soup version (RM3.30 without minced pork) 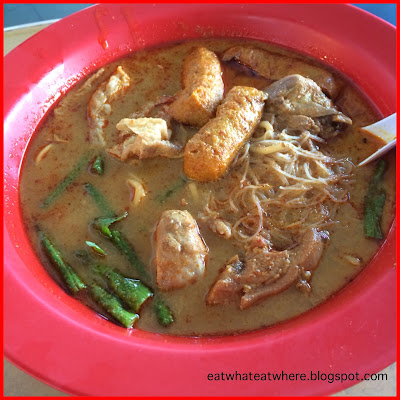 There's also Curry Mee @ RM7.50 (or RM7, I can't remember) and it's a very big bowl that one may find difficult to finish on her own.  The curry broth tastes a little sourish and is more watery.  It's just a passable curry as it lacks that savoury and creamy taste of coconut milk that I'd want in my curry. 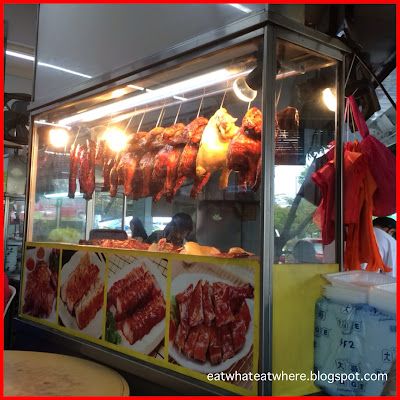 Besides the prawn mee and yong tau foo stalls, the other stall worth checking out is the roasted meats stall that's run by a foreigner (whom I initially thought was a worker at the stall).  He must have learnt to speak our local language as well as stole the secret to making good roasted meats learned how to make roasted meat (from his previous boss) and now opens his own stall. 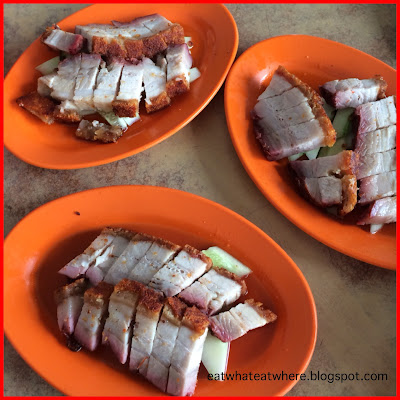 He does a decent char siew and roast chicken but it's the Siew Yoke Rice @ RM6 that draws my family in, not so much because of the taste (though it's still very decent) but more so because of the portion size.  On some days, there can be three orders of the very same thing for each of us.  You have to be early to get your hands on these as he doesn't make a lot of it and it's usually sold off in the mornings itself. 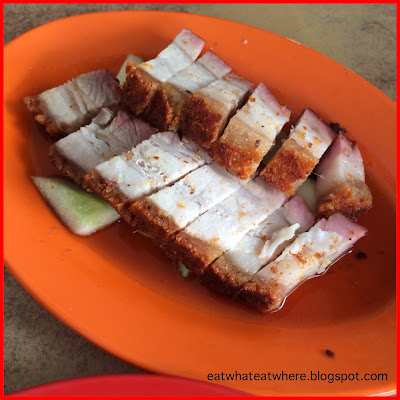 Unlike our more Chinese 'profit making-foccused' counterparts, his portions are more generous than the rest and because of that he can serve the abundant siew yoke separately as he doesn't need to 'camouflage' it with the rice! ;)  He doesn't charge extra for the box either like some do. 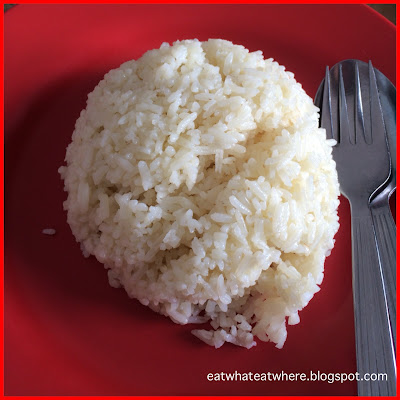 The rice is of a decent quality, well cooked, not mushy, with nicely separated grains, although you'd find some bits of broken grains too. 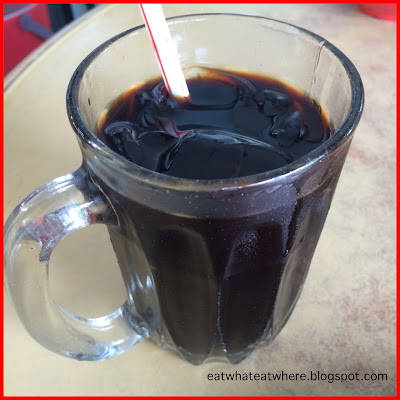 Since the new owners took over, at least the kopi-o-ping tastes better and the owners are a much friendlier lot too.  The Hakka mixed rice, together with the nothing-to-shout-about fish head noodles and char kway teow stalls, round up the rest of the stalls in this coffee shop.

The prawn mee and yong tau foo are the two stalls you should head straight for when you're here.  The prawn mee can rival some of the best I've had and their fried shallots are as fresh as you can get, so make sure you ask for extra (for a small fee lah) if you're a big fan of fried shallots like me.