The attraction of smoky grilled meat and seafood on a stick brought us to BBQ Garden Restaurant @ Cheras Business Centre one dinner night. 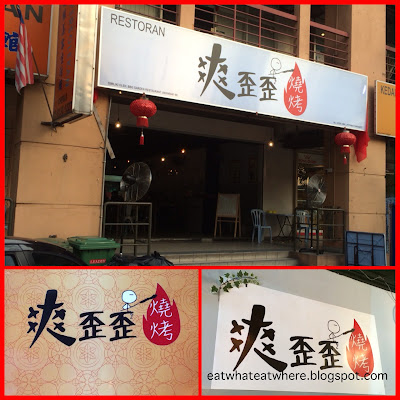 The place is a simple, no frills restaurant.  It's not even air-conditioned but offers barbequed meat and seafood you don't need to grill yourself...which is music to my ears. 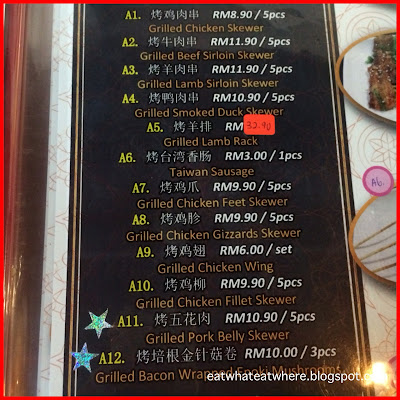 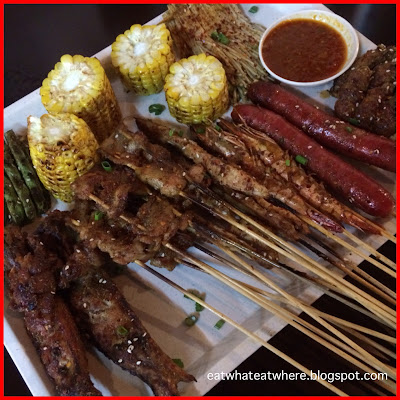 We decided to go with the YY Big Platter @ RM45.90 which offered greater value and a bit of everything with a combo of 6 meats/seafood and 3 types of vegetables.  The skewers came in twos or fours which is ideal for sharing between two (you can also add on rice for a more filling meal).  All the meats and prawns were marinated in the same spice mix and were very spicy.  In fact, it had a bit of that raw spice taste that I don't really like. 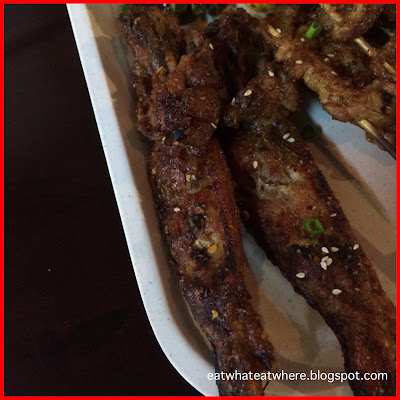 The Big Platter came with two Chicken Wings which were perfectly grilled to the right deliciousness.  The crispy edges of the chicken wings were immensely fragrant and a delight to eat.  I thought the chicken wing was the only meat that absorbed the marinade the best and didn't taste as spicy as some of the other things on the platter. 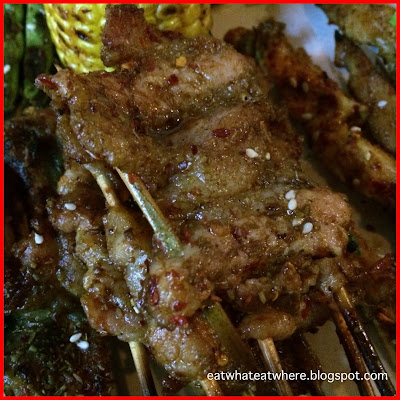 The Grilled Pork Belly skewers, with the desired caramelisation, remained juicy and really fragrant around the edges.  It would have been better if it didn't taste so spicy. 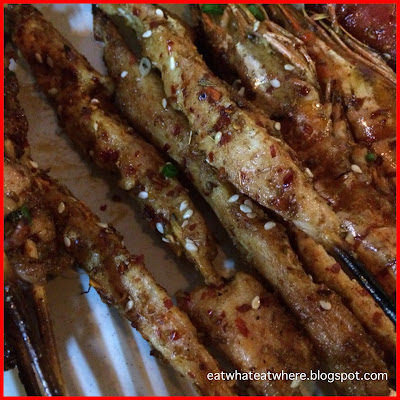 The Grilled Chicken Fillet skewers I didn't care as much for as they were very dry and, of course, spicy. 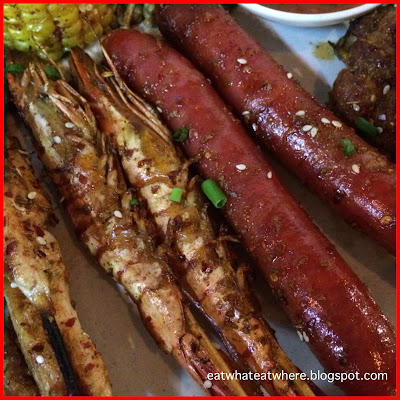 The Grilled Tiger Prawns were fresh but there wasn't much 'penetrated' flavour in the flesh once they were de-shelled since the spice mix clung onto the shells.  The Taiwan Sausages offered a bit of sweetness and some respite from all the heat in the other meats. 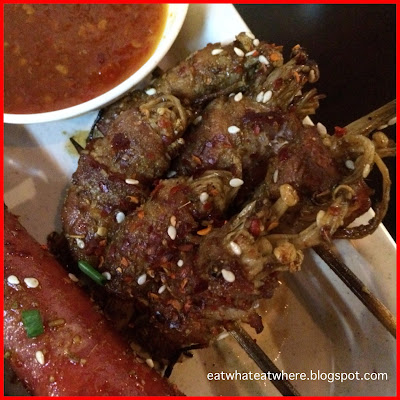 The Grilled Bacon Wrapped Enoki Mushrooms sounded like a dynamite combo but the bacon turned out to be soft (instead of crisp) probably due to the release of water from the mushrooms. 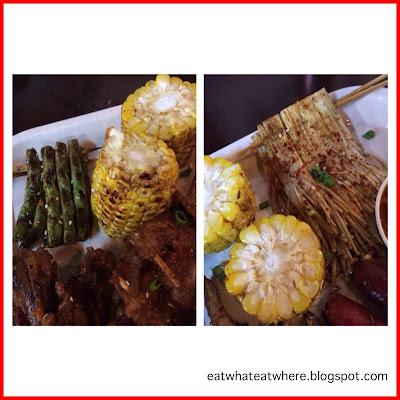 Grilled Vegetables of Corn and Green Beans together with Grilled Enoki Mushrooms round up the YY Big Platter.  I thought the fiery spices overpowered the natural sweetness of the vegetables. 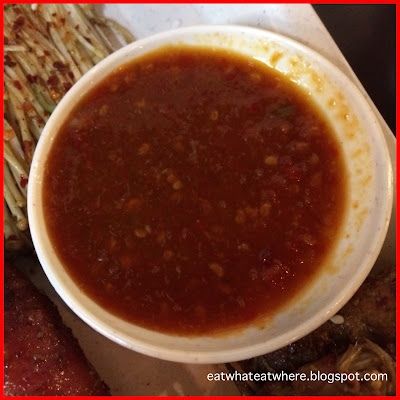 On top of all that spiciness, you're given a chilli dip to spice up your skewered meats even more.....that's spicy on spicy!  I had to call for additional mineral water (with lots of ice) to put out the fire in my mouth! O_o

Now you would think that spicy is the only option for the skewered meats but apparently it wasn't.  And that brings me to my side story.

Although I did see an option for spicy or honey at the bottom of the menu for the individual skewers but it wasn't stated on the Big Platter and I promptly forgot all about it when I placed the order.

When I went to look at the menu to make additional orders, the guy at the counter (I think he's the owner) asked me if I wanted spicy or not spicy.  That's when I went, "Huh, got not spicy?" (in Cantonese lah).  I said to him that I wasn't told that by the guy who took my initial orders.  He further said that I could also ask for a mixture of spicy and non-spicy for my skewers.  What the hell!! :>(  Was that so difficult for the server to ask me?  There were only two options for God's sake.  Isn't it presumptuous of him to think everyone would want spicy and can take that level of heat?  He can't assume that I've been there before....and, as a first timer, I wouldn't know the options available to me.  (Even when ordering a RM6.50 bowl of curry mee at Jia Li Mian, I was promptly told that they have two types of curry mee...on each visit!).  At that point, the owner looked non-apologetic and also seemed to be not too concerned that his staff flubbed up.  Brushing that aside, I went ahead to make my additional orders. 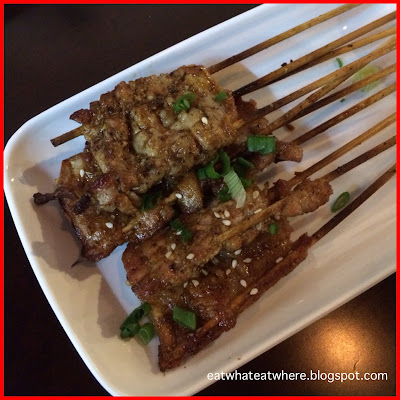 Since we enjoyed the pork belly the most, I made an additional order for individual skewers of Grilled Pork Belly @ RM10.90 (5 sticks).  This time, knowing that there's an option for non-spicy, I went with that.  This was so much better as you can taste the fragrant pork belly without the spiciness drowning the natural taste. 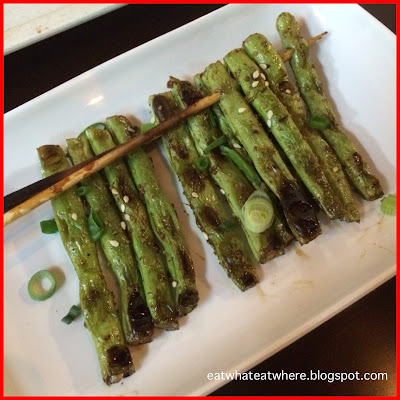 I also asked for an additional order of Grilled Green Beans @ RM5 (3 sticks) and (again) requested for non-spicy of course.  Finally, I can taste the green beans without the spiciness overtaking my taste buds.  Note that the green beans are listed as long beans in the menu.  For me, I find RM5 for the green beans (or any of the other vegetables for that matter) rather expensive since you're effectively getting the equivalent of 6 pieces of green beans that have been cut into halves (wow, just imagine their profit margin for this....absolutely ridiculous)!  And they obviously know that we have to at least order some vegetables to go with this all-meat affair.

And you would think that that's the end of the story.  Not quite.

On reaching home, some two hours later, I happen to look at the receipt and realised that we were charged for two items that we didn't consume.  Since the wrongly charged amount came up to about 30% of our total bill, I thought it was sizeable enough to return to get a refund.  Actually, I was more 'motivated' to return to highlight that a mistake was made than to get my refund of RM21.

On reaching there, what transpired wasn't something I expected.  On seeing (and recognising) me, the owner got up from a table (outside) together with a pregnant lady (whom I'm assuming is his wife).  I explained to him that I was overcharged for two items I didn't get.  His initial demeanour that surprised me was one of disbelief (you'd think I'd drive all the way back here just to claim RM21 if it wasn't true?).

He proceeded to check the order chits which was fine by me.  He showed me my order chit and said, "See, you did order these two items."  That was when it all came back to me...yes, we did write down those two orders (for individual skewers) before we realised the big platter offered a better value and decided to cancel the individual skewers.

We subsequently cancelled those two orders by crossing it out.  I told him what was there not to understand with a horizontal line crossing out each order.  I said obviously your kitchen understood the order chit since we weren't served those two orders.  At this point, he got a little worked up but I was more appalled at what came out of his mouth next...he said I should have checked the bill! O_o

Now how is it that a mistake made by him suddenly becomes my fault! @_@  Yes, I could have checked the bill but I certainly can't be faulted if I didn't coz if I was billed correctly in the first place, I wouldn't have needed to check the bill.  I said, "You made the mistake but now you want to put the blame on me?".  There were some raised voices and, in the end, he did refund me but at no time did he offer me an apology nor admit he made a mistake.

The fact that the owner wasn't even apologetic tells me a lot...and if that's how he wants to conduct his business, he can very well do without my business.  I'm sure he couldn't care less if he had one less customer.

As for the food, the taste was just one note...overly spicy with everything marinated in the same spice mix or non-spicy with only salt and pepper.  It's so spicy, it numbs your taste buds and you can't taste much of anything else after that.  Plus, there's only one dip...and (no prize for guessing) it's also one-dimensional...super spicy.  So, if you have a low tolerance for heat, you only have one option here.  And the other choice of honey is only recommended for certain skewers.

Even if the food was great (and it clearly wasn't), there's no way I will go back there again....no, nay, hell no! Was that explicit enough? >:(  In this day and age, customer-friendly service matters and I can very well take my hard-earned money and spend it elsewhere.  It obviously doesn't matter one bit to him...well, good luck....to his longevity in this business with an attitude like that! :P