Who knew that eating could be so complicated!  I even once read a blog post on the right way of eating "siu long bao"! :P

Anyway, I was intrigued on what I read on blogs, newspapers and the internet on how one should eat sushi.  So, I thought I'd share that with anyone out there who doesn't know that there's a right way of eating sushi (me included).  So, let's amuse ourselves with proper sushi etiquette and (maybe) learn a thing or two along the way.  What follows are excerpts taken from newspapers, blogs and the internet on the rules (or more like do's and don'ts) of sushi eating. 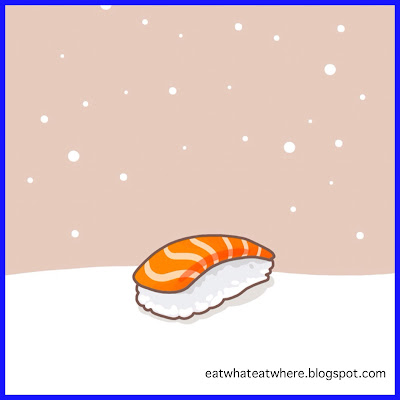 The reason is because most sushi chefs would have already added a smidgen of wasabi between the fish and the rice or brushed the fish with soy sauce in your nigiri sushi.  Well, perhaps this is so at the higher end sushi restaurants but in others the wasabi is usually served separately on the plate or in containers in conveyor belt sushi.  That's when I see people mixing wasabi with their soy sauce like it was a ritual.  Since I don't like wasabi, I missed flouting never flouted this rule...kekeke! :D

But I wasn't amused when I read an extract of Nobu Matsushisa's interview where he said, "In the beginning when I saw this, I was shocked.  But now I laugh." 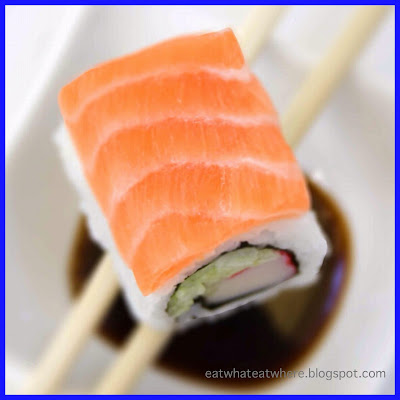 In Japanese culture, Japanese people never put soy sauce on their steamed rice.  Well, that's Japanese culture. In Malaysian culture, we get a plate of soy sauce (usually with chillies) with almost everything we eat...and we like to dip things in it (my husband even mixes the sambal belacan for his fried hokkien mee with soy sauce...that's how he likes it).  But I do agree that we run the risk of rice grains falling into the soy plate when we do this and frantically trying to pick up the fallen rice grains (not a very pretty sight, huh?). 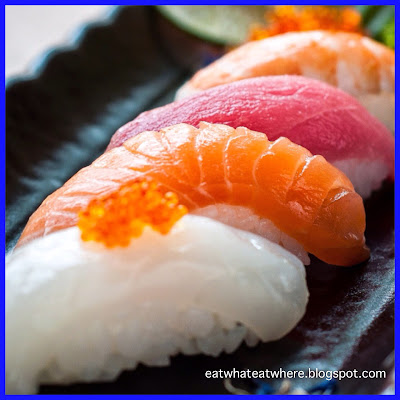 The right way is to dip your nigiri fish-side down and not the other way round so that the soy sauce does not make contact with the rice.  But if we do it this way (in some places), the slice of fish might just fall off the rice if the sushi is not well made.  If the fish on the nigiri sushi has not been brushed with soy, then I'm certainly guilty of dunking the rice in a bit of soy so that it doesn't taste so bland. 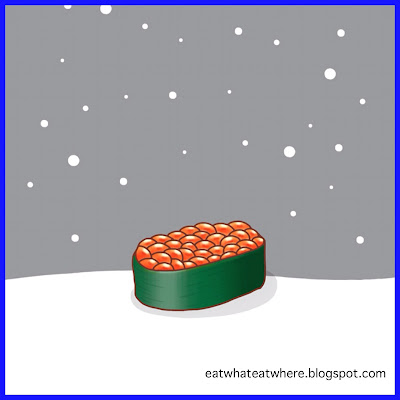 And, if you have toppings like uni (sea urchin) or ikura (salmon roe) which are impossible to turn over without the toppings falling off, one way would be to use a slice of vinegared ginger to dip into the soy and use that to brush the sauce onto the fish or topping of the sushi.  For me, I normally dip my chopsticks into soy and then transfer it onto the fish or topping...hehe!

#3 - Eat sushi with your hands 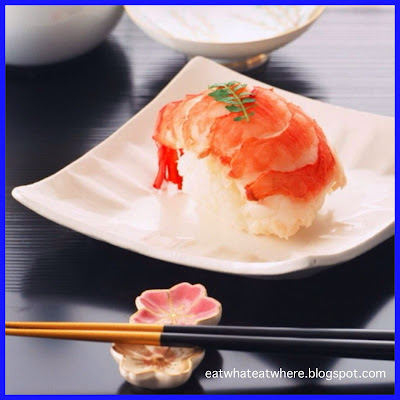 Nigiri sushi is supposed to be eaten with your hands (or fingers, more precisely)...and not chopsticks (contrary to belief).  I've actually seen this in food shows early on too.  So, is eating banana leaf rice and Malay rice (in Malaysian culture) but that doesn't mean we (the locals) follow suit (though I do eat with my hands at home with packed Malay rice).  Eating sushi with our hands (much like eating banana leaf rice) allows one to enjoy it at its maximum but some of us don't like to dirty our hands when eating out in public, so we'd eat with utensils.  Same way, I eat my sushi (any sushi) with chopsticks too. 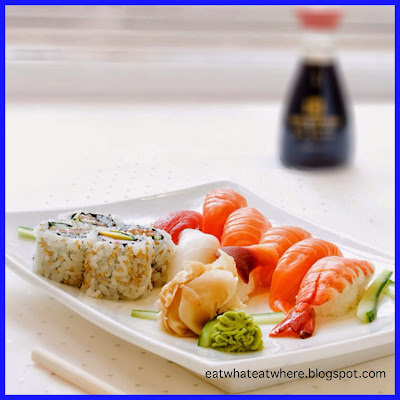 Sushi etiquette says we're not supposed to share...well, I'm sorry but that's just baloney to me...it's their culture, not ours.  For us, sharing is caring (like we'd usually do in any typical Chinese meal).  So, I say yes to sharing! :D We're supposed to eat sushi in one bite and I can certainly understand the logic in that.  It's so that everything (the flavours and textures) is balanced in one mouthful, I guess.  But, for ladies, that's not always possible....coz the size of the sushi may be too big to fit into the mouth to allow proper chewing.  So, I eat my sushi in two bites (for this very reason)...or I sometimes cut it into half with my chopsticks so that I can share my sushi! >.<

#6 - Fish should proceed the rice 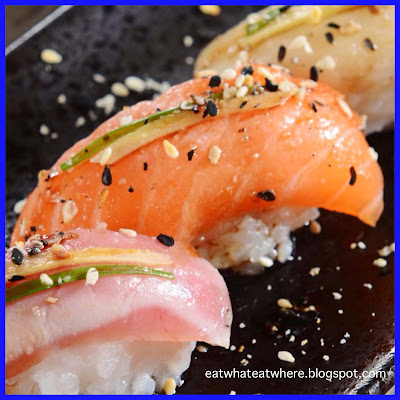 When putting nigiri sushi into your mouth, you should avoid putting the whole piece into your mouth directly. The best way is to have the fish face your tongue so that the fish is the dominating flavour your mouth rather than the rice.  Hmm...that could be tricky to do. 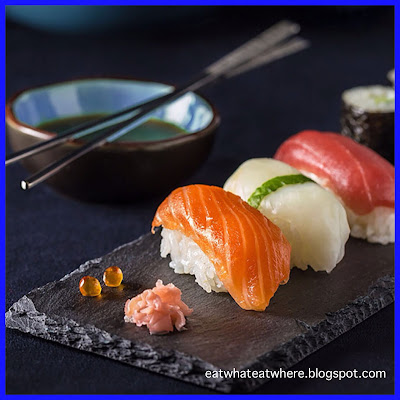 #8 - Put your cellphone down during your meal 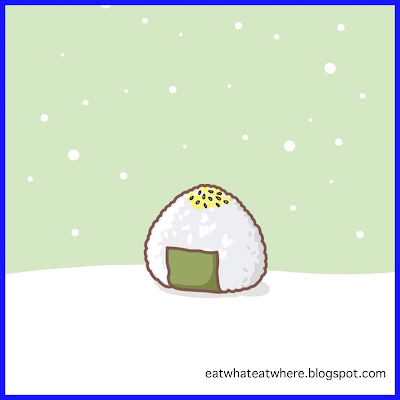 This last rule does not pertain to the eating of sushi but more of a sushi etiquette.  And it's respect the sushi chef in front of you by putting your cellphone down.  But it's easier said than done in this digital age of wanting to snap all the beautifully prepared omakase for our blog, instagram, tweet or facebook purposes. This one most of us are guilty of! :P 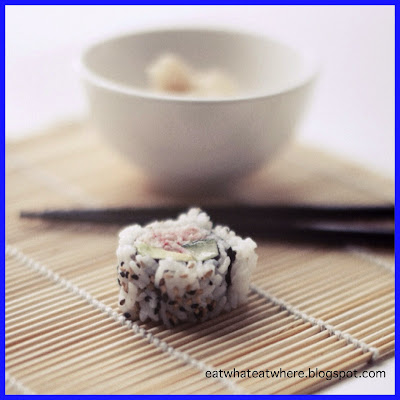 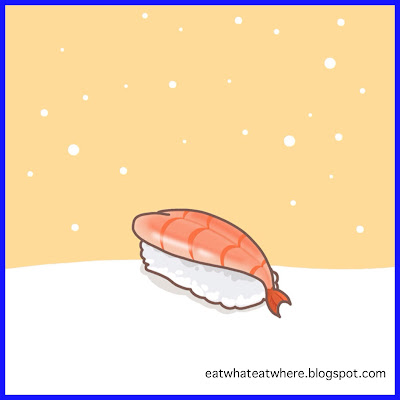 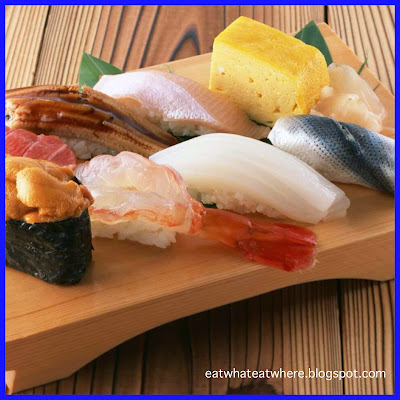 Luckily (or maybe not T_T), I can't afford omakase menus at high end sushi bars where the best seat in the house is at the sushi counter itself, of course, where one can interact and watch the sushi chef in action. Otherwise, with my sushi eating habits, I'm sure I'd raise an eyebrow or two (of the sushi chef) or (heaven forbid) offend him in any way or have him stare at me uncomfortably! :D :D 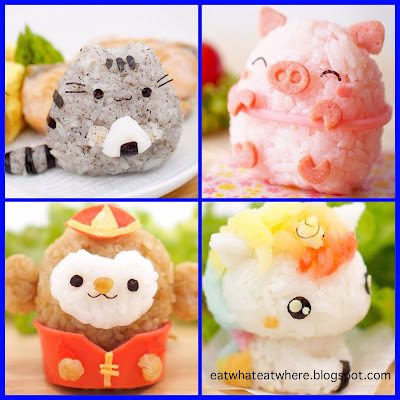 Ok, these have nothing whatsoever to do with sushi eating...lol....they're just some cute sushi pictures I came across (while searching for photos for my blog post) which I couldn't resist!!! ;) 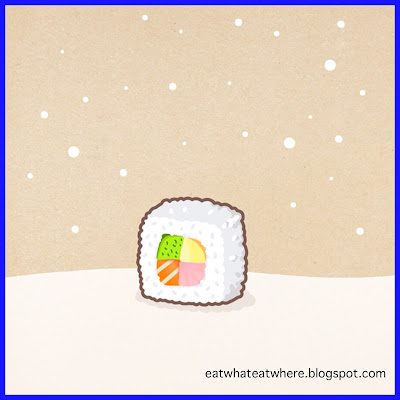 This post is not meant to teach you how to eat sushi as many of you are very well versed (more than me for sure) and in the know (maybe even know a few more that I don't).  I just found some of these sushi eating rules to be rather funny (some I wasn't even aware of myself) and thought I'd share it.  Anyway, there's really no wrong way to eat sushi in my books.  It's how you enjoy that counts....not how you should enjoy!