A couple of months back, we drove past Restoran Yuan Garden Dim Sum House @ SS2 PJ and realised that the restaurant was no longer on SS2/24 (read my previous review here).  On returning home, I found information online that they have moved to the row behind at SS2/30 (the same row as The Lobsterman). 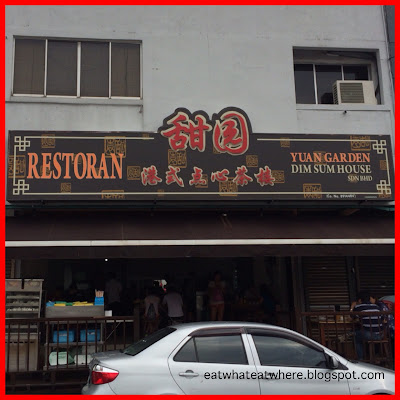 So, we made our way to the new location one Sunday morning.  On reaching the new place, what was surprising was that the restaurant is now situated in an intermediate lot and only about half the size of the previous location (where it used to be a bigger corner lot).  Of course, that would mean less customers (although it was still fully occupied) and we did manage to secure a table quite immediately...I was beginning to fear the worse!  In my world, when a restaurant shrinks in size, instead of expanding, it doesn't bode very well for the restaurant.
My fears would soon subside when the plates of dim sum started arriving.  We'll start with some of the new dim sum dishes we tried (that we didn't order the last time). 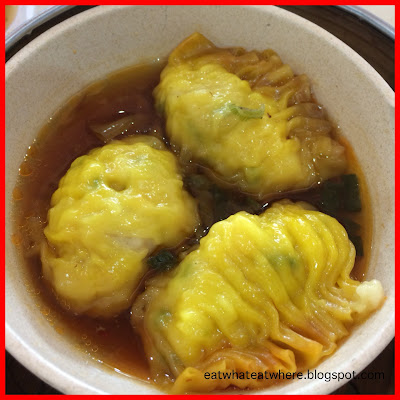 I think these were Spicy Prawn Dumplings with a prawn and minced pork filling (if I remember correctly) in a slightly spicy-sweet-sour sauce.  What was great about this dish was it came piping hot and the sauce (which was more like a hot broth) was to our liking. 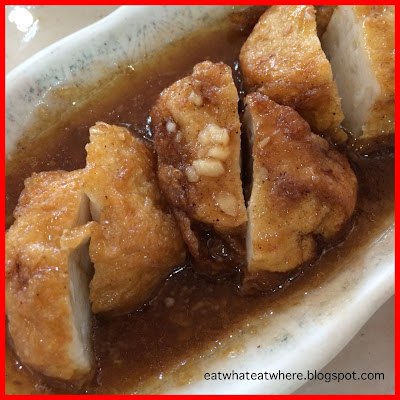 This was the "Sang Kan Yuen" which I found to be decent.  They're fish balls wrapped in a very thin skin (not sure what they call that in English but looks something like a pork fat netting). 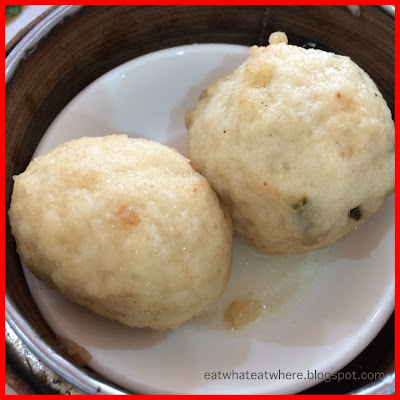 Yet another fish paste dim sum...Fried Fish Balls which tasted pleasant enough.  These may not look fried to you but they're...ever so lightly coz there's a steamed fish ball version also. 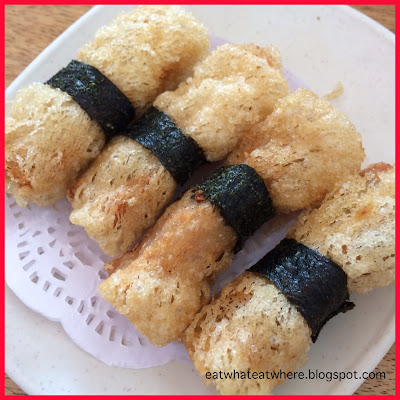 This was the Fried Rice Paper Rolls with a filling of minced meat and vegetables.  We didn't get it super crispy, so not my favourite although it was still alright. 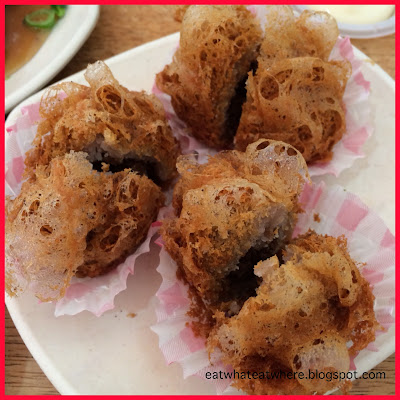 But that wasn't the case when it came to their Fried Yam Puffs as they were served super crispy with a decent flavoured filling.  This is probably the yam puff with the crispiest crust I've eaten and the best dim sum item here for me....and, if the filling had been more on point, it would probably be my most favourite yam puff todate.
And these were some of the repeated dim sum orders that we'd usually order when we're eating here. 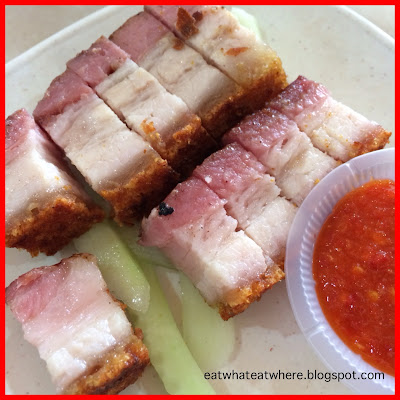 I'll start with the 'hidden gem' and surprise find at a dim sum restaurant...the "siew yoke" (roasted pork).  This is a siew yoke that's leaner than usual but still has a small layer of fat in between with a tinge of pink at the bottom....cooked just right!  The skin was crispy and crackling...even the spicy chilli dip (with a real kick) was top-notch.....it was still so, so good! 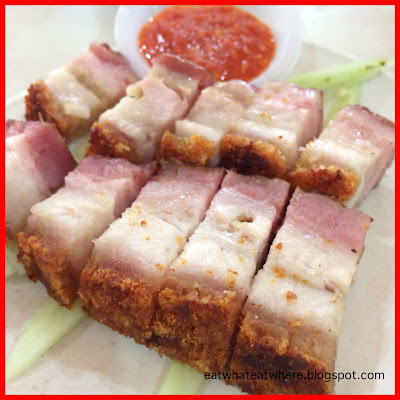 Who are we kidding?  One plate just won't do! :D  And because this isn't typically a dim sum item, I had to rank the yam puff ahead of this one as the best dim sum here. 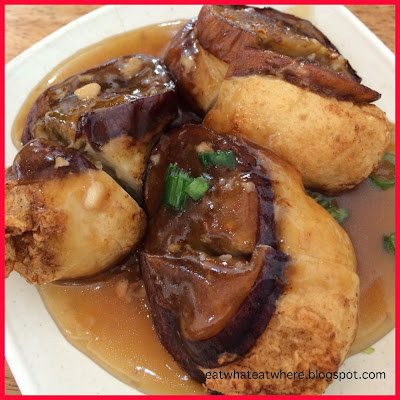 The Stuffed Brinjal was still as good with the soft caramelised brinjal in between a very thick fish paste filling...and the filling was still thicker than the brinjal.  The sauce, once again, complemented the stuffed brinjal and took away the usual oiliness associated with this dish. 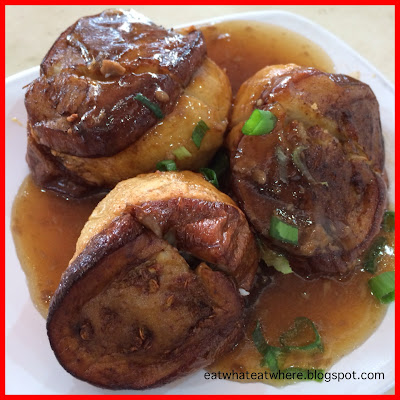 That's probably why my spouse found this brinjal to be his favourite.  Again, one plate will never be quite enough :)  Personally, I prefer a thicker cut of brinjal to filling but those who enjoy a thicker filling would surely appreciate this one. 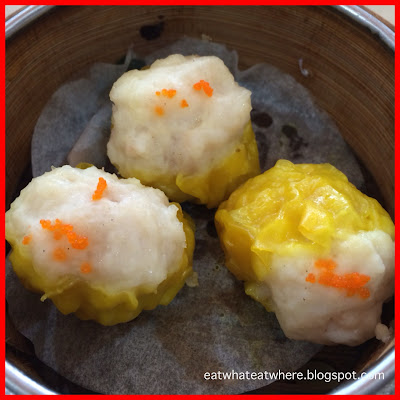 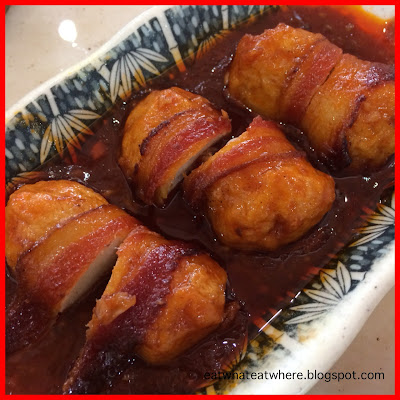 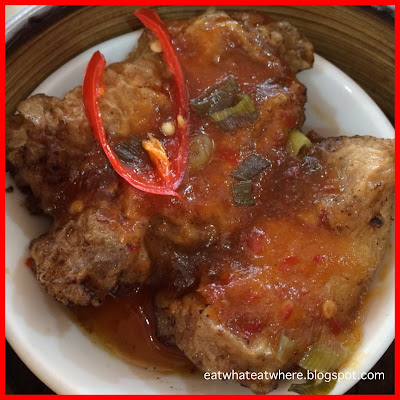 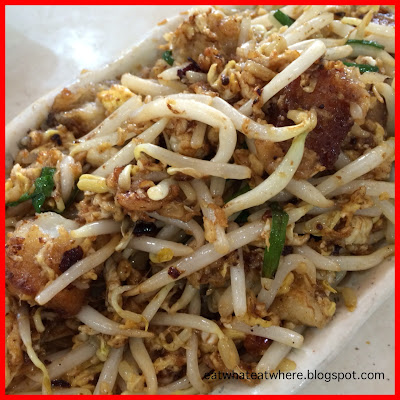 The Fried "Lor Bak Kou" (Carrot Cake) tasted better this time round.  This time, the carrot cake was fried till they developed a nice, caramelised exterior.  If there was a cause for complaint, it would be that there were more bean sprouts than there were carrot cake pieces although I do love my bean sprouts. 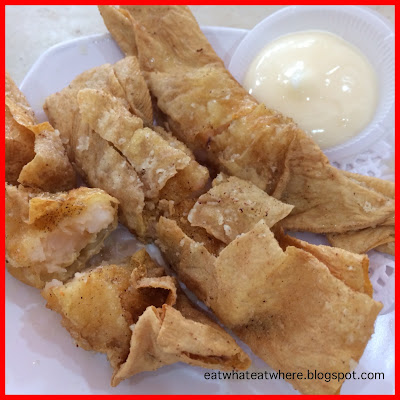 Finally, this was the Fried "Har Guin" (Prawn Roll) which had good sized, fresh prawns in the filling with a very crispy bean curd sheet wrapping.  This dim sum item has vastly improved from the last time we had it (even my son thought so as he's very critical about his beloved fried prawn rolls).  Not only that but they were served freshly fried and piping hot to our table...and, of course, we had to order more! 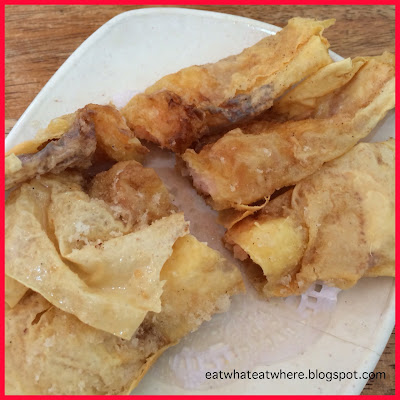 But then our happiness was short-lived coz, on a subsequent visit, it wasn't quite as good as we found the bottom of the plate rather oily, probably due to the frying temperature not being at the optimum temperature when the rolls hit the hot oil. 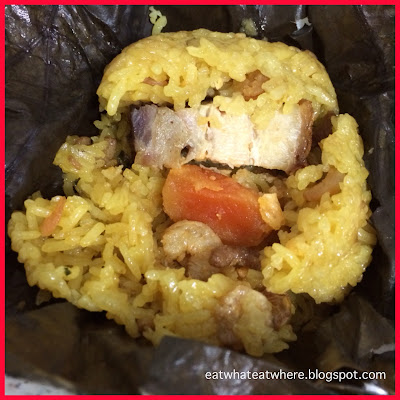 The Lotus Leaf Wrapped Steamed Glutinous Rice was a bit different from the one we had last time though still fairly good.  The glutinous rice was more yellowish and it was now filled with a piece roasted pork (instead of minced meat), salted egg and dried prawns. 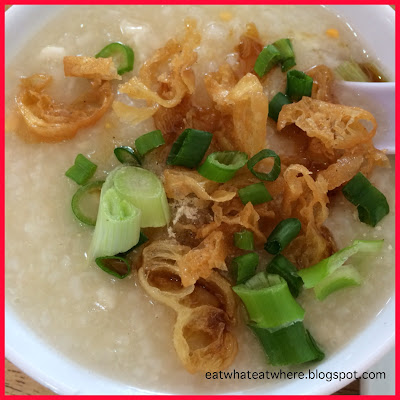 The Porridge was also one of my favourites here previously with its just-nice consistency and bits of minced pork, salted egg and century egg.  The topping of fried "yau char kwai" (Chinese crullers) is also the crispiest I've had in a bowl of porridge.  It's then finished off with a fragrant drizzle of sesame oil.

The dim sum items are reasonably priced between RM3.50 - RM6.50 a plate.
My Personal Opinion

This restaurant used to offer average dim sum at best but I've seen some improvements since they moved to this new place.  I'm not sure why but it could be because the new place is only about half the size of their previous restaurant.  As such, the smaller crowd enabled them to serve more of their dim sum piping hot or freshly fried....and maybe it's because of this that I see some improvements in the flavours of some of their dim sum items.  [#Note: On a recent revisit, however, I saw a large group of people going upstairs which tells me that they probably occupy another floor and that the place is not as small as I envisaged.  But, still, most patrons choose to sit downstairs (so, it's still relatively smaller compared to their old place) and the dim sum carts make their way to your table very promptly (unlike the previous place).]

My top picks would be the yam puffs, siew yoke and porridge.

We certainly enjoyed our dim sum more at this new place...and we'll keep coming back for even more, I'm sure.

Email ThisBlogThis!Share to TwitterShare to FacebookShare to Pinterest
Labels: Another One Bites the Dust (aka Closed), Dim Sum, Food: Chinese, Location: PJ SS2