Curry laksa, as everyone (at least those who follow my blog regularly) knows, is one of my top three favourite noodles to eat.  So, I was happy (and proud) to read that our curry laksa (not any curry laksa but KL's curry laksa) made it to Lonely Planet's Ultimate Eatlist at number 2.

Now there are many good curry laksa in KL but the curry laksa specifically mentioned by Lonely Planet is the Madras Lane curry laksa which I've never eaten (and that's because it's in an area that I don't normally visit). 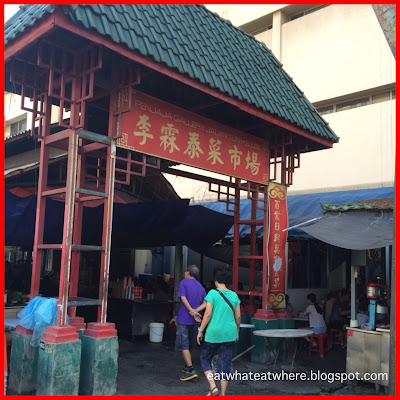 But that listing made me curious enough to find out if it holds water.  So, off we went to seek out Madras Lane Curry Laksa @ Petaling Street or more commonly known to locals as 'chee cheong kai' one morning.  On reaching there however, we realised that there were three stalls selling curry laksa...and Lonely Planet didn't exactly mention which stall and neither did some of the blogs I read allude us to which stall is the best (some didn't even state the curry noodles they reviewed were from which stalls!) >.< 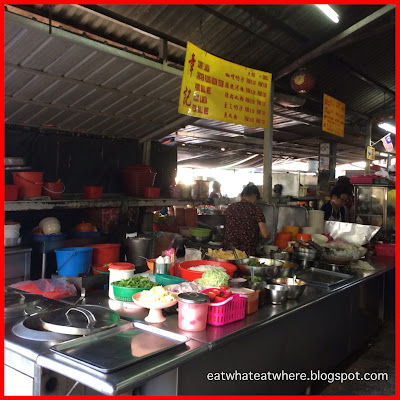 So, the only way to find out is to eat all three myself starting with the first stall.  The first stall will be the one on your left when you come in through the main entrance from the parking lot that used to house the Madras cinema (probably that's why they call this the Madras Lane curry laksa) but please do note the exorbitant parking charges (RM3.50 for half an hour in case you wish to park somewhere further that's cheaper, there's one at RM5 an hour).  The stall also sells assam laksa, pork ball mee and fish ball mee. 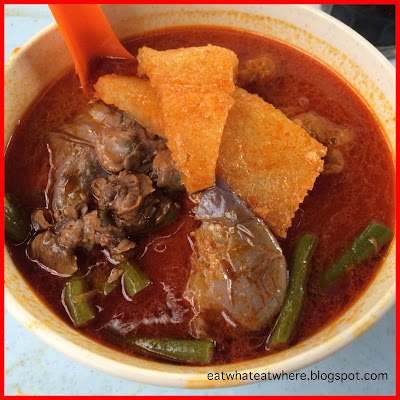 Now, getting to eat this curry laksa wasn't as easy as I thought....but I'll get to that a little later.  We ordered two bowls of curry laksa @ RM7 (small, RM9 for big).  The bowl of curry laksa had only vegetables (long beans and brinjal), tau fu pok (beancurd puffs), chee pei (dehydrated pig skin) and good-sized see hum (cockles) but no chicken.  Don't be misled by the plentiful cockles coz my husband's share ended up in my bowl...yay! 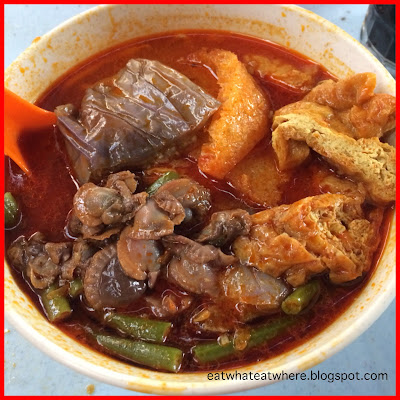 We didn't know (and we weren't told either) that the default curry came without chicken.  I guess the hawkers just assumed that we've eaten there before and would know how to order. 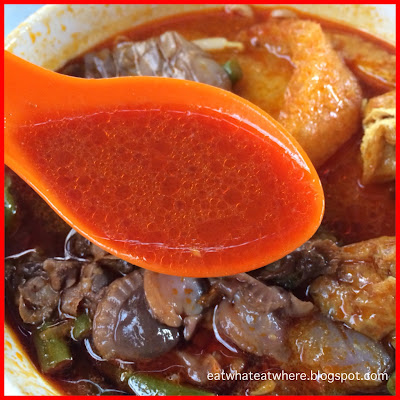 The curry broth, while on the savoury side, was missing any hint of sweetness and creaminess from santan...actually devoid of flavour altogether.  Not only was the curry laksa oily, it was also very thin and watery.  Overall, it was a really poor tasting curry laksa.  Even the average laksa in my neighbourhood coffee shop is way better than this.  Perhaps it was our fault for not ordering one with chicken as the curry from the chicken might have thicken up the curry a bit. 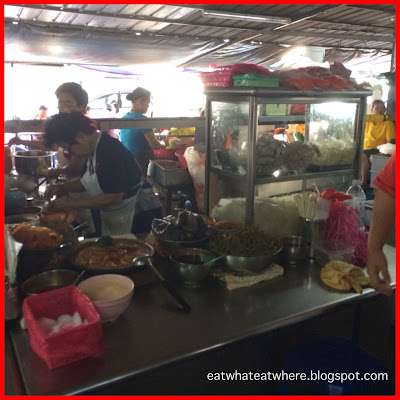 On another visit, we returned to try the curry laksa from the other two stalls starting with the second stall (or the middle stall which also happens to the smallest stall of the three) operated by two ladies (sisters, it seems).  We did notice that this second stall was doing fairly brisk business. 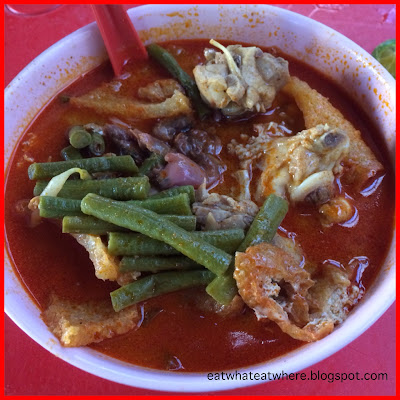 This time, we made sure we ordered the curry laksa with curry chicken @ RM9 (small, RM7 without chicken).  The stall also offers assam laksa and fish ball mee. 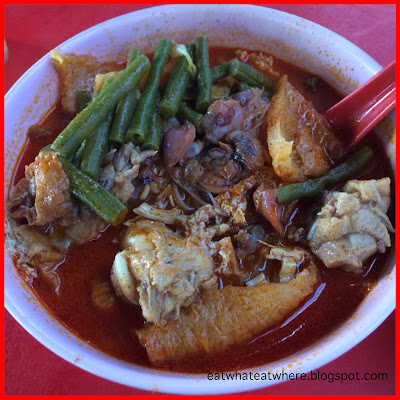 This one also came with the usual ingredients of long beans, brinjal, pork skin, beancurd puffs and good, bloody cockles plus chicken, of course. 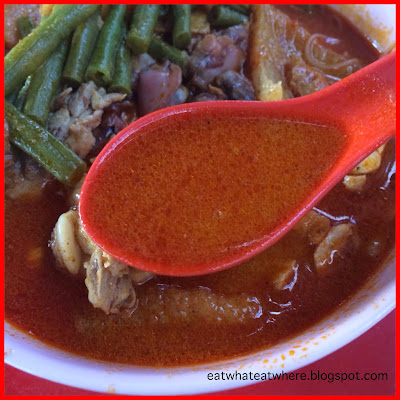 At first look, the broth of this one looked thicker already than the first stall right away (and it was).  The reddish hue also indicated to me that it had a good dose of spices.  Taste wise, it was a more savoury broth and loads better than the first stall.  It, however, didn't have enough of that inherent sweetness from coconut milk. 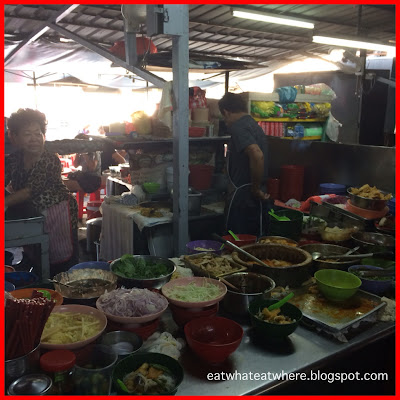 Next, we moved on to the third and final stall...this is the curry laksa that Lonely Planet has ranked second on their Ultimate Eatlist 2018.  This stall also sells similar noodles offered by the first stall. 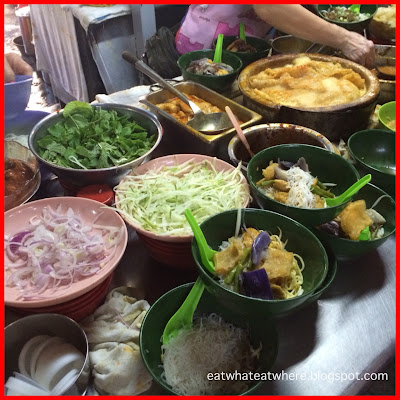 How do I know this?  I know this because I re-read the article (and confirmed that it is indeed the third stall, the one that's on the chee cheong fun stall's left).  Plus, I took note of the photo of the man operating the stall and saw him here at the stall. ^_~ 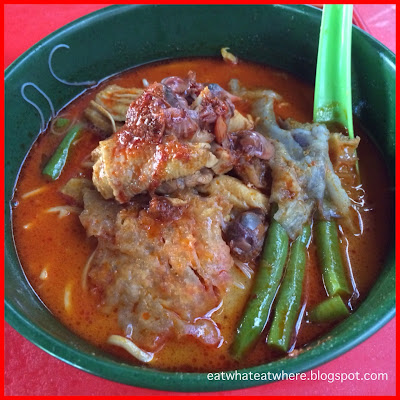 Their curry laksa with chicken @ RM10 turned out to be the most expensive of the three.  When it arrived, my first impression was that the stall seemed rather stingy with their curry broth...which can be looked upon as a good sign...haha! :D  That's because when they give so little, it's a sign that the broth is probably good and that's why they're so stingy with the amount. 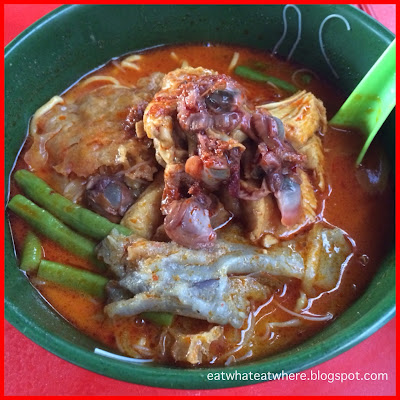 The bowl was filled with the required ingredients of soft brinjal and long beans, juicy pork skin and beancurd puffs that had absorbed the flavours of the curry, tender chicken and plump, raw cockles. 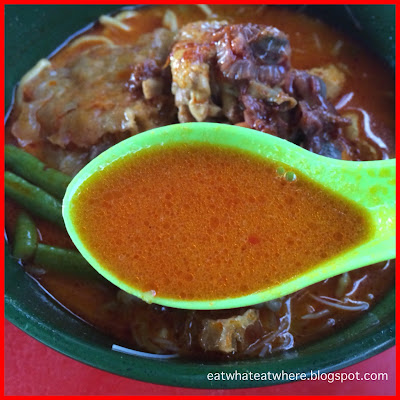 The colour of the broth of this one had a more orange hue and it was also the least oily of the three.  This indicated to me immediately that it probably had a bit more santan than the other two.  Taking a sip of the broth, it was obvious to me that this was the best tasting one of the three. ^o^  It had the sweetness of the coconut milk that I wanted. 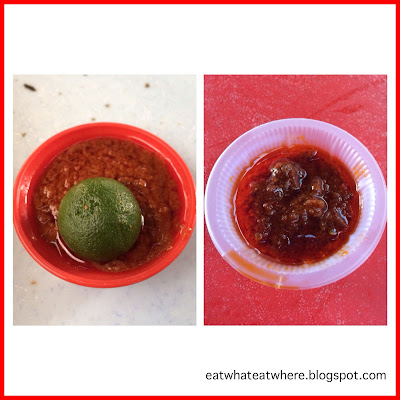 All three curries came with a sambal.  Only the first one came with a piece of kalamansi lime.  The third sambal turned out to be the most tasty one of the lot...no surprises there! ^.^

There you have it...curry laksa from all three stalls tried and tested to make your decision-making easier. So, the next time you're here, you know which ones to go for...our pick is the third stall with a bit more santan flavour in the broth.  Stay clear of the first stall (both for the stall's rudeness and mediocre curry laksa).  The second stall has the friendliest aunties and deserve some business if you don't mind a bowl with lesser sweetness.

All three stalls also have another noodle dish in common...assam laksa....and, no, there'll be no taste test to compare the three since my husband doesn't eat assam laksa at all + I'm not that huge a fan of assam laksa myself.

Coming back to why eating the curry laksa here is not as easy and that's because the stalls here are notoriously territorial.  I thought only my cat is territorial, looks like the hawkers here are too....which makes seating here a load of confusion, especially for first-timers.  If you don't know where to sit and end up sitting at the wrong tables, you're not allowed to order food and drinks from certain stalls.

When I first walked up to the first stall to try to order, I was told to sit down first by the lady (in a loud but not shouting voice) and that they'll come by to take our orders.  Great but she didn't quite tell me where to sit either.  So I asked.  She said hers are with red stools.  We finally got a table (opposite her stall) and then I realised that the lot next to our seats also had red stools (but different coloured tables)!  Luckily we sat at the right table and managed to order from the first stall.  It seems they're so territorial that if two persons sit at her table, you have to order two bowls (not one!) of her curry laksa. >_<

And if you think the curry laksa stalls are territorial, don't get me started on the drink stalls. 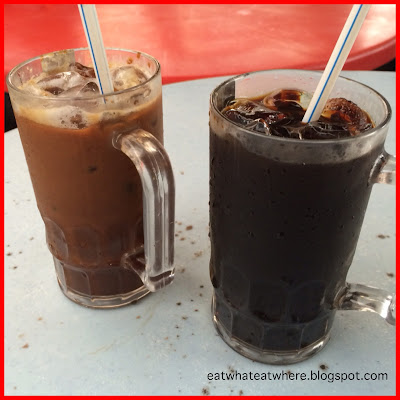 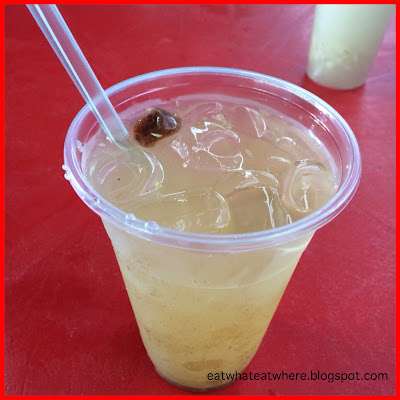 On our second visit, we were more 'learned' this time and sat at Drink Stall B which allowed us to order curry laksa from the second and third stalls (but not from the first stall and we wouldn't want to anyway).  For that, we had to sacrifice drinking our much preferred coffees (and certainly better drinks) from Drink Stall C...haiz.

So, is that confusing enough for you?  Ish....I hate these 'territorial' stalls and it reminds me of another place that practises 'boundaries' as well namely Imbi market, both when they were at their old venue and now in their new premises at ICC Pudu.

I was very happy when I found out that our KL curry laksa was voted #2 in Lonely Planet's Ultimate Eatlist but I wasn't exactly enthusiastic when I heard that it was the curry laksa from this place.  But I guess I can understand why this was chosen since Petaling Street/Chinatown is an iconic tourist destination for visitors to KL.  So it made a whole lot of sense for Lonely Planet to showcase this curry laksa instead of any other laksa.

Well, I'm at least glad they got it right by choosing the curry laksa from the third stall which I concur is the best tasting one of the three.  But if you want to eat here, get ready for the not-so-conducive surroundings (this is street food after all) and territorial seating.  Having said that, I really don't see how tourists (especially non-Chinese speaking tourists) can eat here, unless they're accompanied by Chinese-speaking locals, as they'd be clueless about the 'boundaries' of where they can sit, how to order and which stalls they can order from.

In conclusion, it's highly unlikely I'll return to Madras Lane for their curry laksa....but there could be something else I might be willing to return for. ^_~