Isetan the Japan Store opened its doors in the last quarter of 2016 with six floors selling high end imported products from Japan and I've never visited until now. 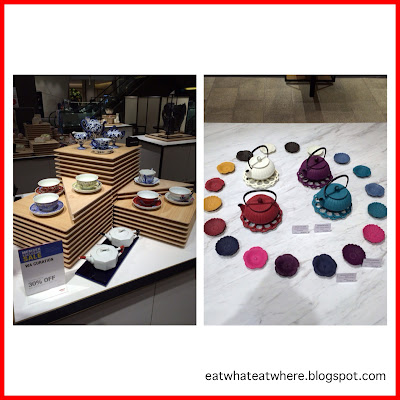 Why would I?  When you can only window-shop here as everything is out of reach, price wise, unless your idea of a teapot and trivet costing in excess of RM600 or a tiny cast iron plate costing more than RM150 is your cup of tea! O_o 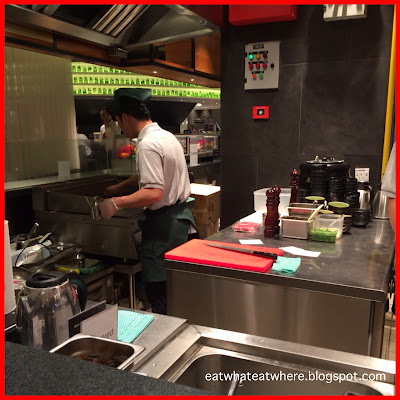 But then I got totally smitten when I first laid my eyes upon luscious looking slabs of meat on vkeong's blog. And so, that became the very reason for my first visit to the food hall on the lower ground floor.  It's something like a posh food court for lack of a better word but it's at least within our means.

There are various types of Japanese stalls here offering sushi to sashimi, tempura, bento and wagyu.  Not to worry if your eating party wants to eat different things as you can sit at one outlet but still be able to cross-order from another stall.  My choice for lunch that day with a friend was Tamaruya (Meat Master) @ Isetan The Japan Store, of course. 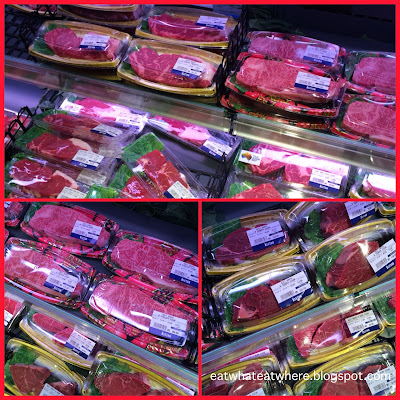 The concept at Tamaruya is that you get to pick the meat you like and have it cooked for you at a minimal fee.  They have different wagyu cuts from expensive to affordable to cater to all wallet-types.  There's the expensive sirloin at RM59/100g and tenderloin at RM49/100g to a more reasonably priced cut of rump at RM37/100g and RM27/100g or the very affordable Australian beef ribs steak at RM12.90/100g and Australian beef sirloin steak at RM11/100g. 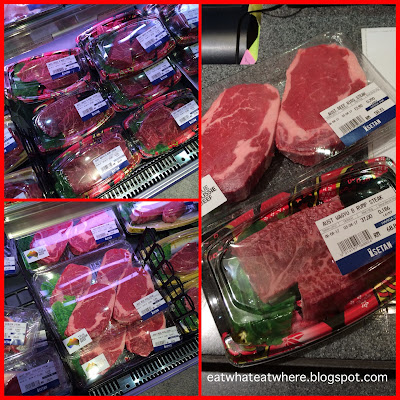 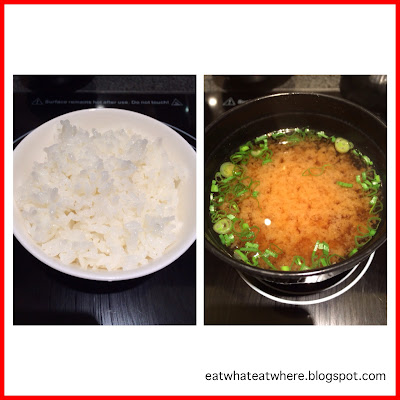 At this point, you can also add on Rice for RM3, Miso Soup for RM5 and Green Tea for RM3.  Since there was quite a bit of meat, we decided to share a rice and miso soup and got two green teas (which are refillable). 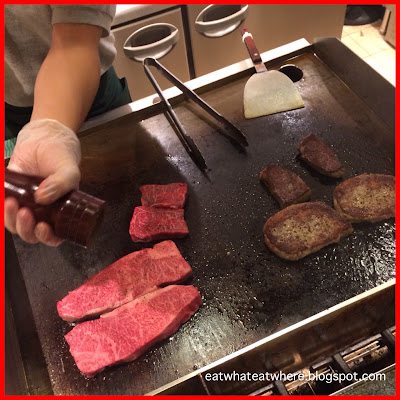 That's the able chef cooking the meat for us. The meat on the right was ours (aka the cheaper cuts T_T) while the ones on the left were obviously the expensive sirloin ordered by another customer.  But be prepared to pay around RM180 for a piece of 300g sirloin (which is just nice for one). 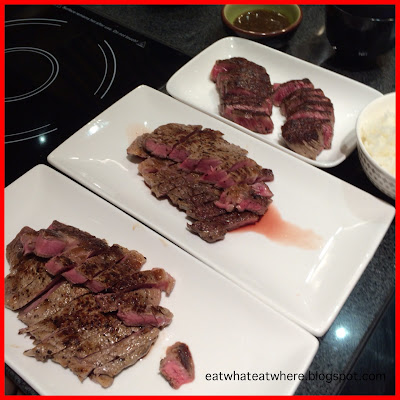 Our cooked meats were expertly executed to perfection by the chef (the plate at the top was the rump steak and the bottom two plates were the beef ribs steak).  I noticed that the chef did not rest the meat before cutting, so if you want to have your steak whole, do let the chef know before they're sliced and presented to you. 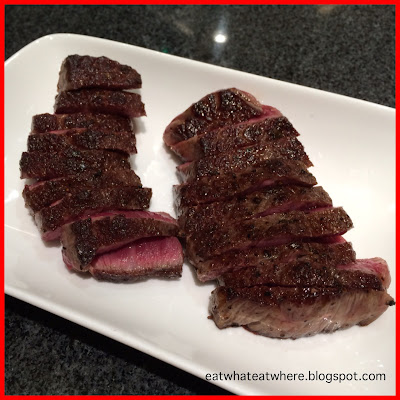 The meat was cooked simply on a teppanyaki grill only.  Just look at that exquisite sear the chef achieved on the meat....it was absolutely perfect! 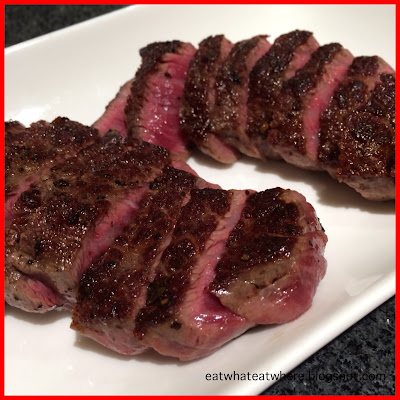 I asked for medium rare and the two pieces of rump steak were brilliantly executed to that doneness.  The tender, pink meat, with just enough marbling, was juicy and immensely flavourful, making each slice of meat simply divine to eat.  I could have easily polished off the entire plate myself! ^o^ 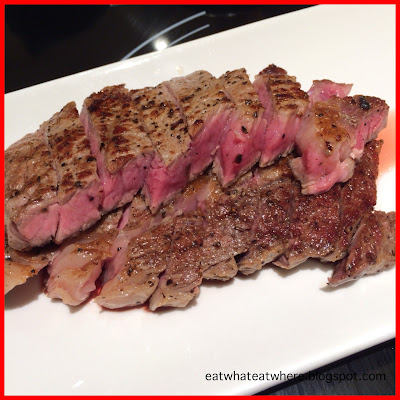 The two pieces of beef ribs steak were (again) cooked to medium rare as requested (maybe these ones a bit more towards medium) but still had a beautiful charring on the outside. 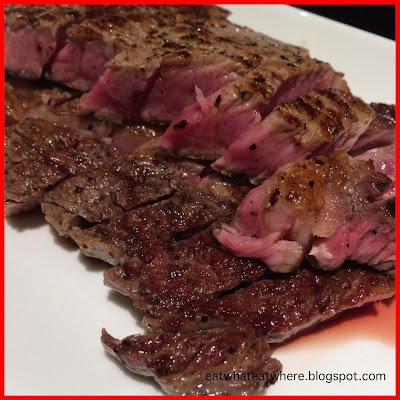 Perfectly seasoned with just salt and black pepper, it was still a very decent tasting piece of steak I have to say although not as flavourful as the wagyu rump. 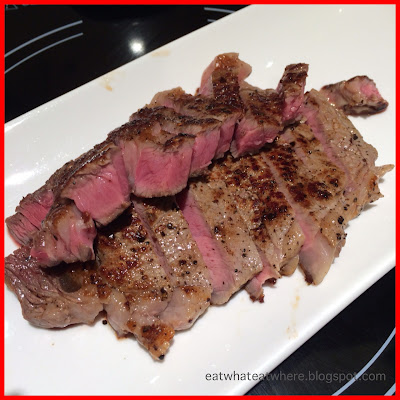 I was more than pleased to find such an adequately satisfying piece of meat for that price.  If you're a small-eater, that sizeable piece of steak will set you back a mere RM25 (since there are two pieces in one packet which two can share). 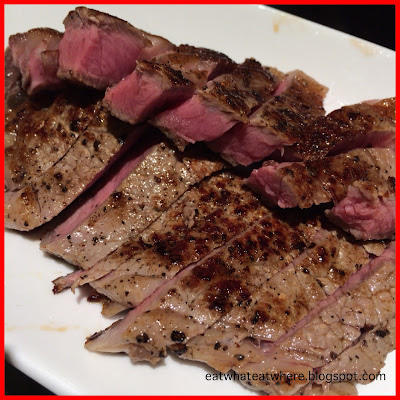 Superb char on the outside.  Tender and juicy meat.  It can't get any better than that! ^.^  If you're not too fussy about the flavour of the meat, you can fulfill your steak craving and eat to your heart's content with this cheaper cut of meat. 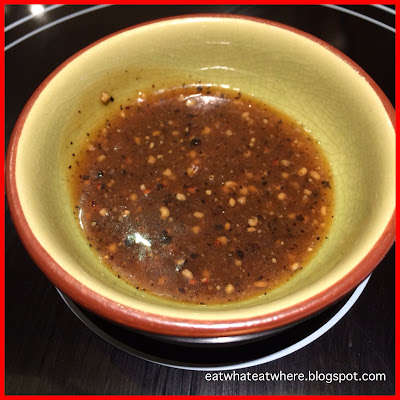 But, should the flavour of the meat be a contention, that can easily be put to rest with the utterly delicious dipping sauce they provide which tastes a bit like black pepper sauce (not as strong and robust but better in many ways).  One dip into this impressive sauce and it won't even matter if the meat was not so flavourful to begin with. 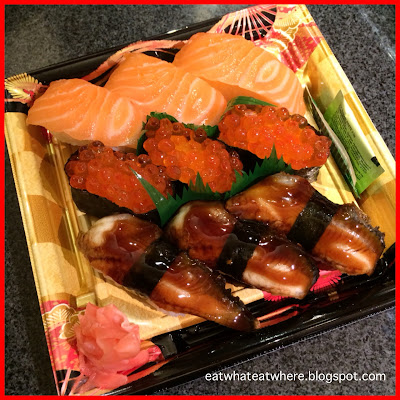 If you have a bigger appetite or want something else other than meat, you can get some sushi from the counter next to the meat and eat them at Tamaruya since you're allowed to cross-order anyway.  So, we got ourselves some sushi for my friend's kids to share. 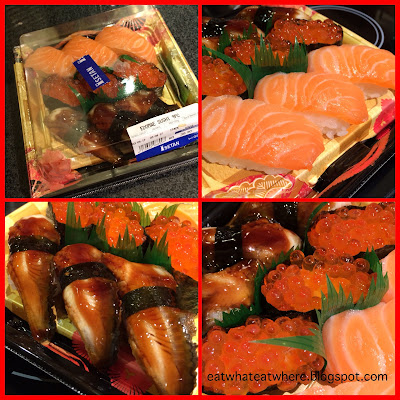 The box of 9-pc Edomae Sushi @ RM38.90 featured 3 pcs each of salmon, ikura and unagi sushi that came with some pickled ginger, soy and wasabi. 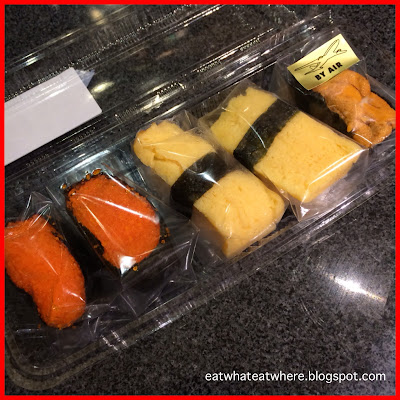 We also picked some individually wrapped sushi for RM20 made up of ebiko and tamago sushi @ RM3 each + a piece of uni (sea urchin) sushi @ RM8. 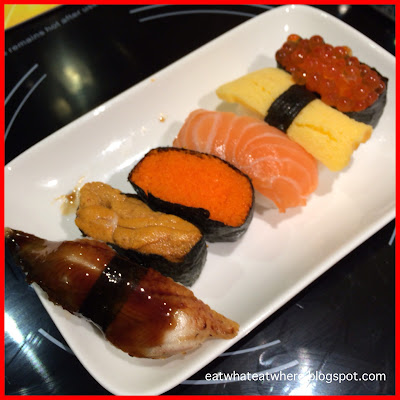 I didn't taste all the sushi but what I did taste were certainly decent and well-made, so no complaints on the freshness of the sushi.  If you're looking to indulge in some fair-priced uni sushi, you can get them here though we can't quite expect the uni to be of superior quality when the price is RM8. 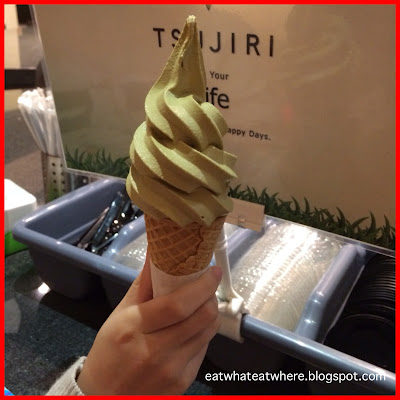 And if you want to end your meal with something sweet, the Hojicha Mini Soft Serve Ice Cream @ RM8.90 is a good choice.

If you're craving juicy yet good quality steaks, then this no-frills place for meat, cooked the Japanese way with simply just salt and black pepper, is definitely worth a visit.

Although I won't go as far as to say that the steaks here are cheap since some of the wagyu beef can go as high as RM200, you can still find some very reasonably-priced and affordable Australian beef cuts for around RM25. So, go with what you think is within your budget.

Besides a meat fest, there are plenty more food options here (like sushi, sashimi, tempura and bento) though I'll be more tempted by the lust of gorgeous meat more than anything else if I'm here again! ^_~