I remember my first visit to Dai Cha Dim @ Pavilion fondly for a taste of their HK-style wantan noodles which I ended up liking very much.  So, a return trip was on the cards to try some of their rice dishes. 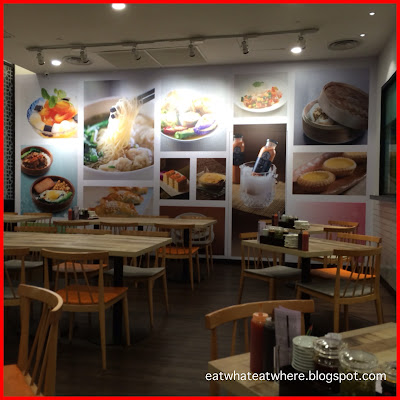 Although the place seems to offer cha chaan teng delights (based on the similarities of some of their offerings like milk tea, teng chai chuk or Hong Kong-style boat porridge and shrimp roe noodles), I actually thought the food was much closer to our local tastes than other HK-style eateries here.  I later found out (from the staff) that the chefs are indeed locals though some ingredients are imported from Hong Kong (such as the wonton noodles). 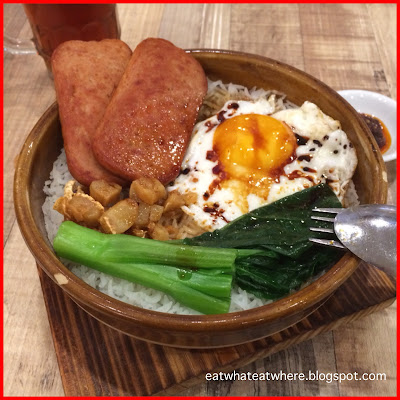 After enjoying the Cursory Rice (a similar luncheon meat & egg rice) so much at Mak's Chee, I wanted the same thing here with an order of Steamed Rice with Luncheon Meat & Pork Lard @ RM14.80 from their Steamed Rice section. 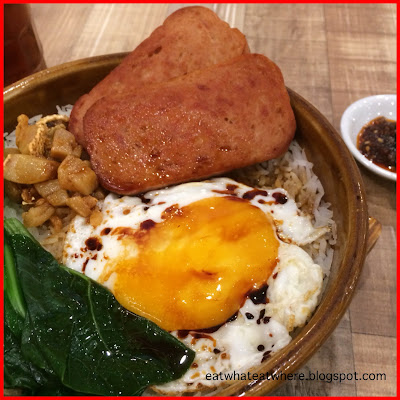 This one came with two thick slices of fragrantly-fried luncheon meat and a perfectly runny egg (drizzled with a good-tasting light soy) but with one notable exception...the inclusion of crispy pork lard! ^.^ 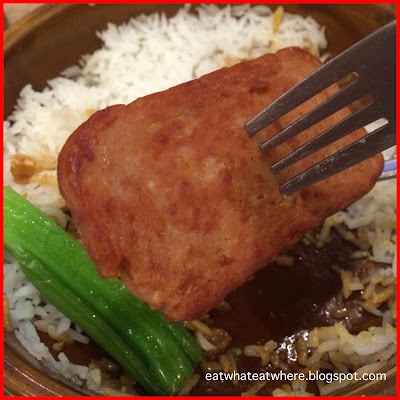 The luncheon meat was of good quality (with a familiar taste, like one I've eaten from a rectangle can) though not quite as fragrant as Mak's Chee.  And I was more than happy to find it served with two slices of luncheon meat (yay!)...and not one (as depicted in the menu). 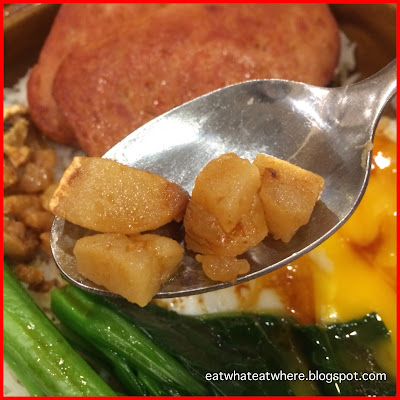 But it was the devilish pork lard that took it to a whole other level...wickedly good! :P  The pork lard was super crispy and fresh tasting but this time I noticed that some pieces came with skins on (which I'm not thrilled about for its slightly harder bite).  Definitely preferred the ones (without skin) from before! :( 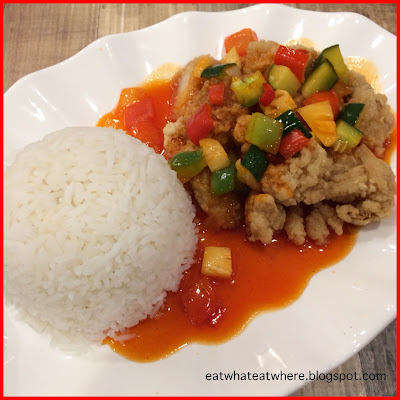 From their Plated Rice section, we went with an order of Sweet & Sour Fish Rice @ RM20.80, always a favourite with us whether it's done with fish or pork.  This dish was cooked with a medley of all the requisite vegetables that should be in a sweet and sour sauce...tomatoes, onions, green bell pepper, pineapple and red chillies. 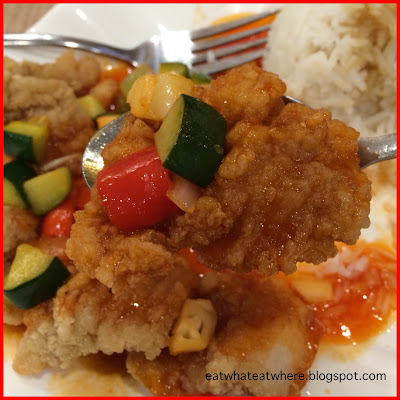 The fried fish pieces were lightly battered and crispy...not sure what fish was used though but it certainly didn't taste like sang yue (snakehead or haruan) that's commonly used by tai chow places. 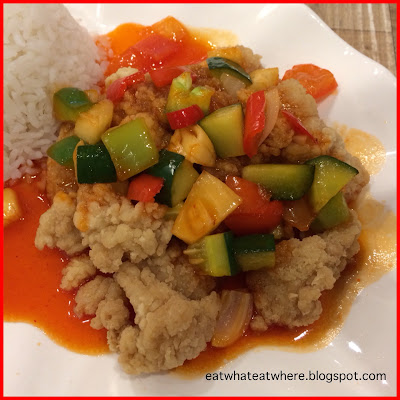 The sauce consistency was just right, not cloying thick or sweet, with the necessary dosage of sourness.  As you can see, instead of tossing the fish pieces in the sauce, the sauce was poured over the fish which enabled the fish to stay crisp. 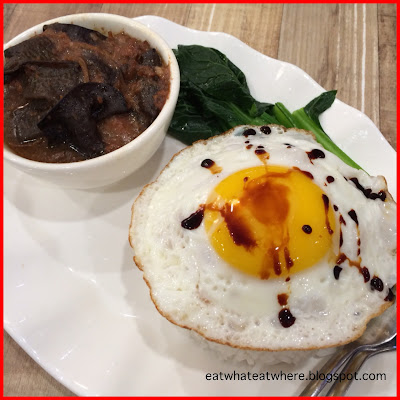 I've also always liked Hakka-Style Braised Pork Belly Rice @ RM17.80, otherwise known as char yoke, and the dish here was served with a sunny side up egg and choy sum.  The egg was cooked perfectly with a runny yolk.  Even the choy sum was tender and soft just the way I like it (most places prefer to undercook it to yield a crunchy bite but that sometimes ends up being too hard). 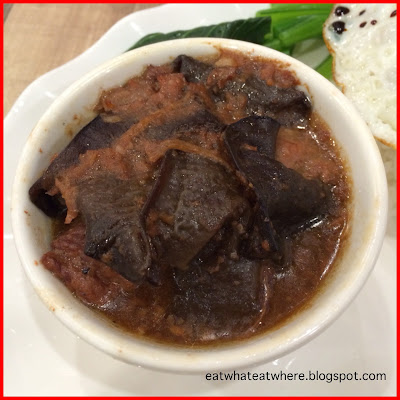 I love char yoke provided the pork pieces are on the leaner side.  Oh, I can hear rumblings already...my mother-in-law would always say...aiyah, not fatty, not nice!  Lean?...how to eat...so coarse and dry! >_<  That couldn't be further from the truth.  Not if it's cooked right....and this one was cooked right! :P 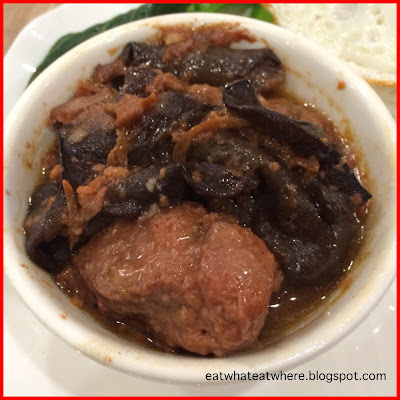 This char yoke was tenderly lean (with only a little fat).  The sauce was very tasty too...I wish there was more of it, I lapped up every drop.  So, this ended up to be one of my more favoured renditions of char yoke. Who says lean meat can't be good?  This was...adequately lean, achingly tender and amazingly good. 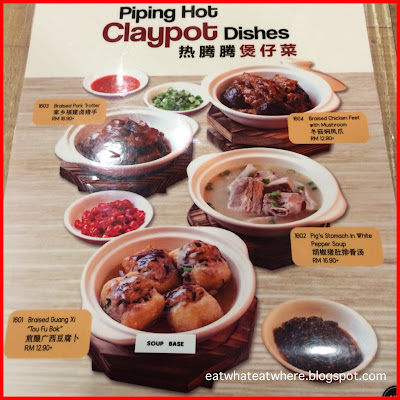 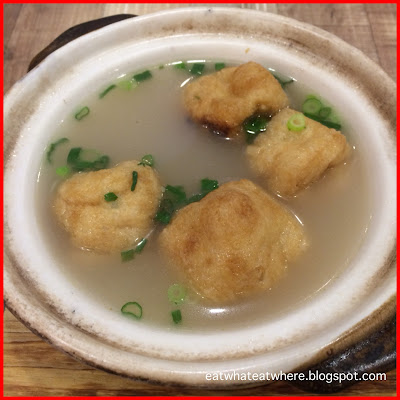 So I ordered the Braised Guang Xi "Tou Fu Bok" @ RM12.90 to try.  I thought I was ordering braised tau fu pok (based on the name of the dish and how it looked in the menu) but what arrived didn't look anything like the menu.  I found four pieces of stuffed tau fu pok floating in a claypot of soup instead which looked just like a dish of yong tau foo in soup.  It was during a subsequent visit that I noticed the words "soup base" were added to the dish.  I guess they realised the ambiguity it caused and rectified it (but the photo is still rather misleading though). 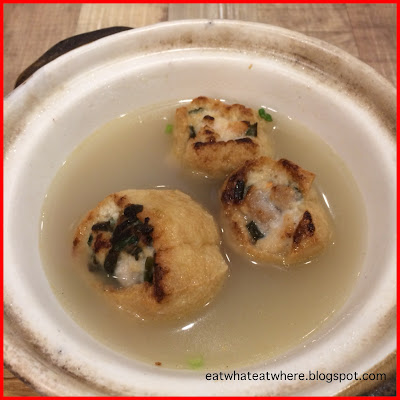 Turning them over, I was at least pleased to see it wasn't quite like plain yong tau foo as they've been pan-fried with a bit of charring at the bottom.  The size of the tou fu bok depicted on the menu was also misleading.  That one, the tou fu bok filled the claypot snugly, the ones served were floating loosely in soup.  So, they were either very huge pieces of tou fu bok or it was a very small claypot...hahaha! :D 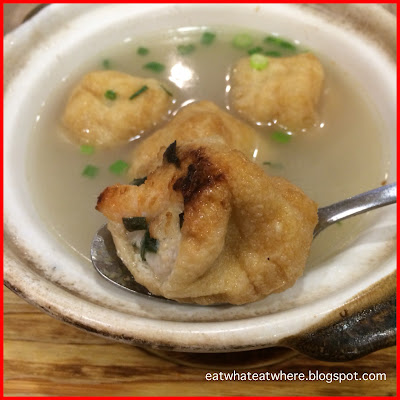 The tou fu bok filling had prawns and fish paste (maybe even some pork) in them but they were very ordinary in taste.  Nothing that would be memorable enough to make me order them again. 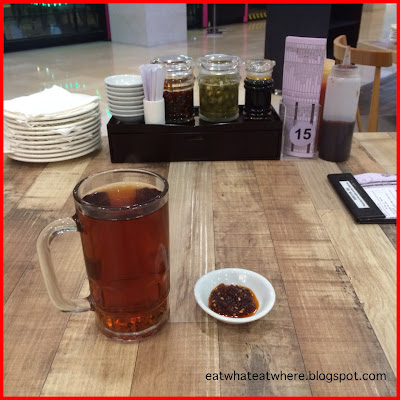 Condiments of a cooked chilli paste, pickled green chillies, light soy and a bottle each of chilli sauce and (probably) sweet sauce (teem cheong) or (it could be) dark soy are available tableside.  Pu Er Chinese Tea is RM3 a glass. 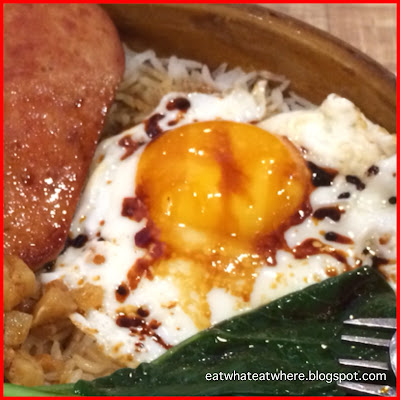 I think I need to take a moment to mention even the simple things like soy and rice here coz they deserve mention.  They boast of using the finest virgin soy sauce and a quality aged homemade sauce for a rich, rounded flavour...and I concur, the soy that was drizzled on the egg (and rice), much like the first draw soy from Mak Chee's, was certainly much tastier and of a better quality than most others I've tried. 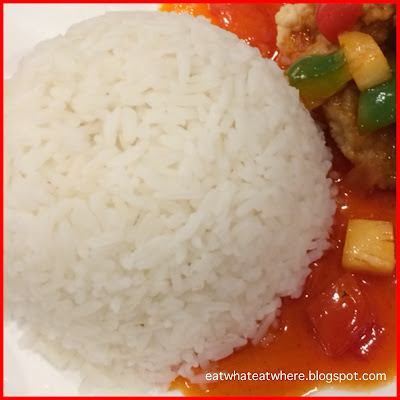 They even get the simplest thing right...the rice is always well-cooked, fluffy with nicely separated grains, sometimes even a bit crusty around the edges (the steamed ones that come in an earthen bowl).  You don't have to worry about getting wet or mushy rice here.


If you're looking to eat some one-plate rice meals, small stir-fry (siu chow) dishes or fried rice and noodles or big stir-fry (tai chow) dishes with rice in absolute comfort without breaking a sweat (literally) and the bank...this is a top contender!  Most of the one-dish rice meals are priced very reasonably under RM20 (with good portions too) for a location like this.

I'm wondering how their siu chow dishes stand up to the superb wonton noodles and equally stellar one-plate rice meals I've had so far, so I'm thinking of trying those next.  It's pretty obvious I intend to return. ^_~