I don't speak French but Tous Les Jours (pronounced "Too-Leh-Joo") is a South Korean franchise serving a wide selection of French-Asian breads, pastries, cakes and beverages.  It opened its first store in Bangsar in June 2013 and has since opened 3 more in Wolo Hotel (Bukit Bintang), Empire Subang and Empire Damansara (the latest outlet). 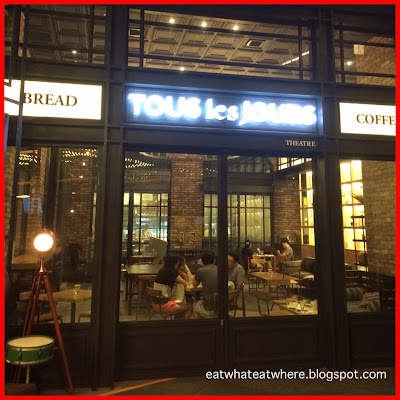 My friends and I decided to swing by Tous Les Jours @ Empire Damansara for more chit-chat after an earlier lunch at another venue.  I absolutely love the interior charm, the high ceilings and the countryside-vibe brick walls (though the place is a lot smaller than the one in Wolo).  Also, as it was raining heavily, I didn't get to take a pic from the front entrance. 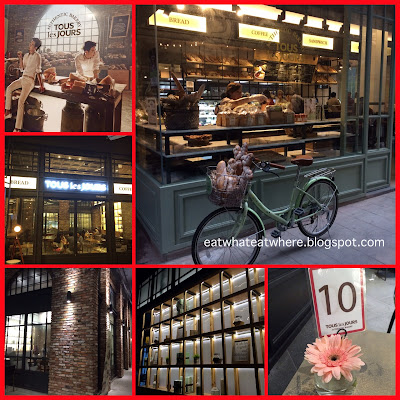 This charming bakery offers you everything from all day breakfast favourites to soups, salads, sandwiches and tartines to breads, pastries and cakes to coffees, teas, fresh juices, frappes and mojitos. 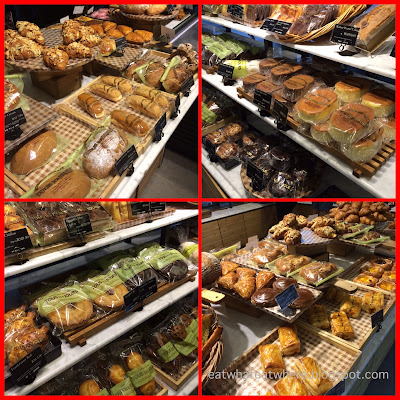 When you walk into Tous Les Jours, nothing is more enduring than the wonderful smell of freshly baked bread and pastries in the air.  You'll be spoilt for choice here with all types of cakes, jams, pastries, biscuits, pies, bread....that's all too tempting! 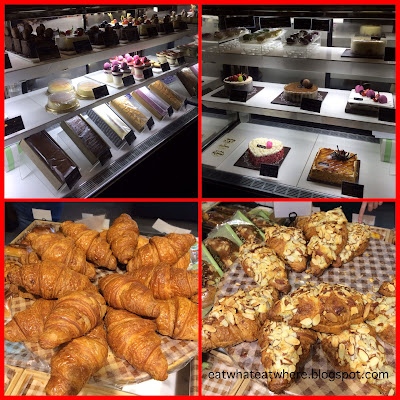 It's self-service here and so my friends and I got down to selecting our pastries and cakes for a late afternoon tea before proceeding to the counter to pay.  At the counter, you order your beverages of choice and any other food from their hot menu and these will be brought to your table. 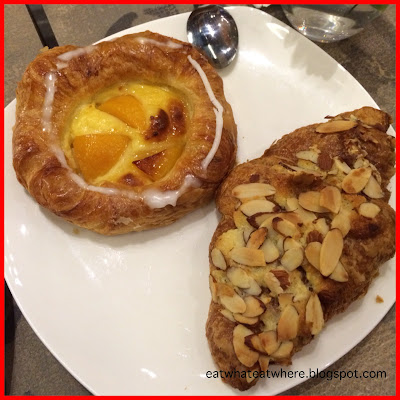 We chose an Almond Croissant @ RM3.90 and a Peach Danish also @ RM3.90.  The Almond Croissant had nice, toasty, crunchy almonds on top but the croissant was not as buttery or flaky as we liked.  The Peach Danish, with a slightly crisp pastry on the outside and a soft custard with peaches, wasn't too bad. 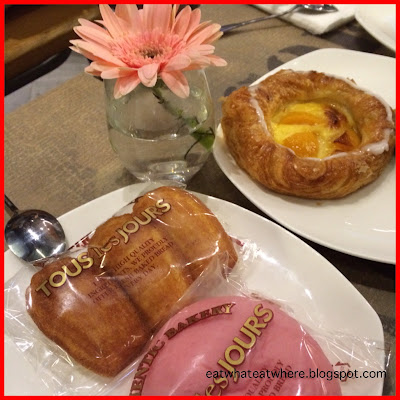 Next, we selected their well-talked about milk bread and madeleines. 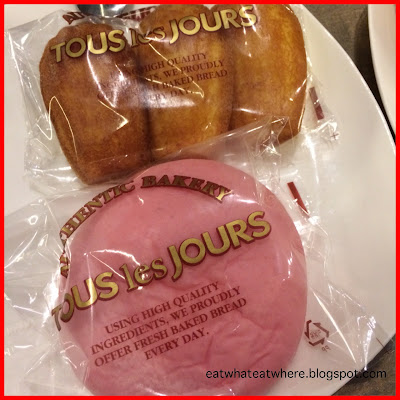 We got the Strawberry Milk Bread @ RM3.80.  The bread was incredibly soft but I wasn't too fond of the milk paste inside. 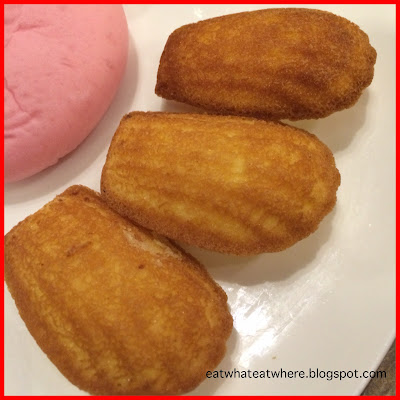 The Madeleines @ RM3.90 (for 3 pcs) were a delight to eat, fragrant and buttery....and good with a cup of tea or coffee.  [#Tip: Madeleines are just very small sponge cakes baked in shell-like shaped pans.]  I enjoyed this the most. 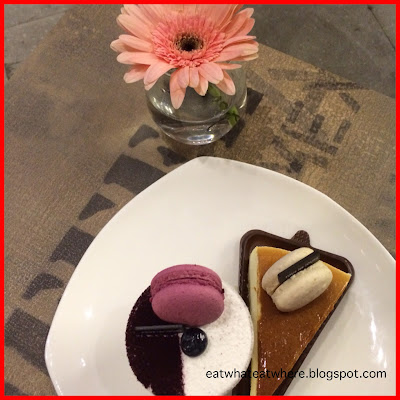 For our cake selection, we opted for the Blueberry Yogurt Cake (Cup) @ RM8.90 and the Classic Cheese Cake @ RM9.50. 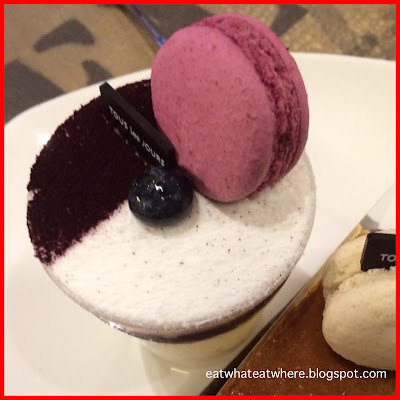 The Blueberry Yogurt Cake came with very little cake but a lot of yoghurt and cream and just a very thin layer of blueberry jam, topped with a blueberry and a blueberry-flavoured macaron.  Although it looked really pretty presentation-wise, we would have liked more cake and blueberry flavour...and less of a creamy concoction. 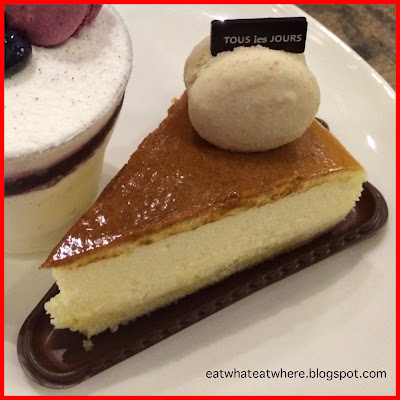 The Classic Cheese Cake was light and the better tasting one of the two.  I don't eat much cheese cakes but my friends seemed to enjoy it. 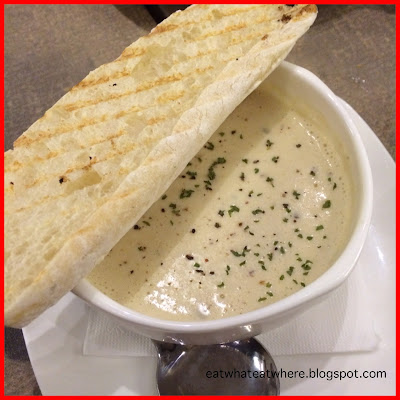 I also ordered a Mushroom Soup @ RM8.90 which was served with a toasty, crisp slice of bread.  The soup was nice and creamy, not too thick.  After the not-overly-impressive pastries and cakes, this was a welcomed change....maybe because it was raining heavily then and this was something to warm my soul.

And here were our drinks: 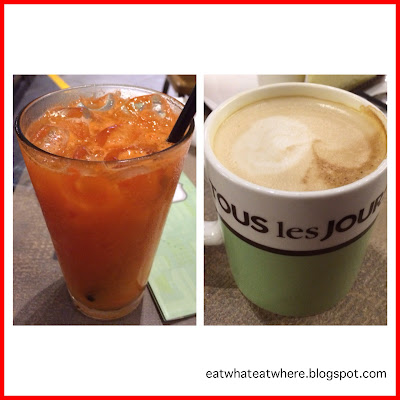 After all that I've heard about this place, my experience here was not as I've expected...or maybe it's because I came here with a full stomach (already).  I would say that their breads, cakes and pastries (including their coffees) are acceptable but no where near outstanding.

For an afternoon tea, our bill came up to around RM100 for the 4 of us (for 4 pastries, 2 pcs of cake, 1 soup & 4 drinks).  Price wise, it ain't exactly cheap with the average pastry costing RM4 and cakes at around RM10 (I couldn't help but overhear a bunch of tweens commenting how pretty the cakes looked but found them to be out of their budget).

As there are still loads of other stuff that I've not tried, I'll reserve my comments.....for now.  But, the ones that I did try, I found them to be just palatable fare...nothing great!

Email ThisBlogThis!Share to TwitterShare to FacebookShare to Pinterest
Labels: Another One Bites the Dust (aka Closed), Bread is in the Air, Breakfast/Brunch Cafes, Coffee Craze, Food: Western, Location: Empire Damansara, Sweet Indulgence