Sean of eatdrinkkl don't usually come hunting in my part of the town...and that's because this area isn't all that exciting when it comes to the food scene. 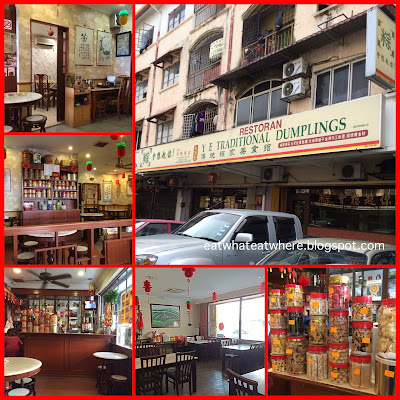 But when he does, I usually make it a point to visit as I'm always happy to include more places in my area into my list of eating places.  After all, many of us, tend to frequent (or like to eat in) places that are near us for the convenience of travelling distance.  And that's how I ended up at Y E Traditional Dumplings @ Pandan Jaya. 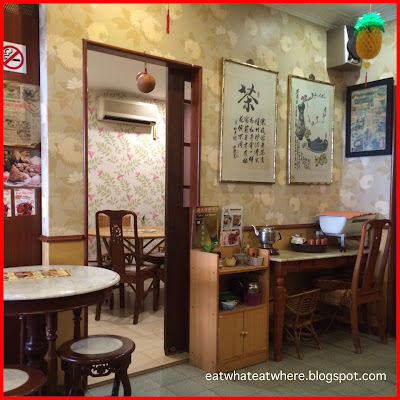 Walking in through the front entrance, you'll be greeted by a space that doesn't look very spacious but in fact it is as it occupies three lots (one of the lots is used as the kitchen though).  You just can't see it all at once as doorways towards the back and side lead to more seating areas.  I even spotted two private dining area/rooms. 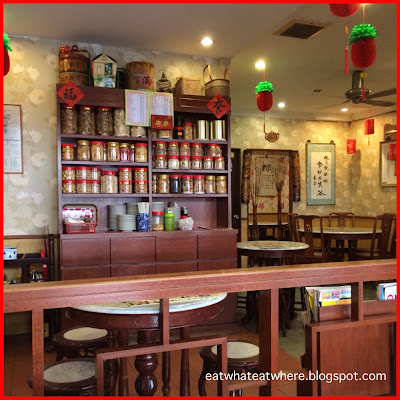 I like the old traditional Chinese-style feel of the place with its wood accents, marble table tops and chairs, bamboo beaded curtains that serve as door dividers...and they were nicely dolled up for Chinese New Year too. 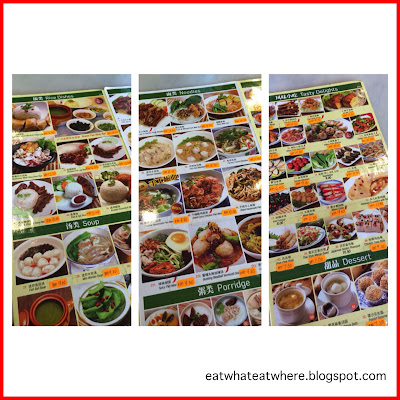 Looking through the menu, they offer a fairly extensive range from rice dishes to noodles, soups to porridge, tasty snacks to desserts and all sorts of traditional chung. 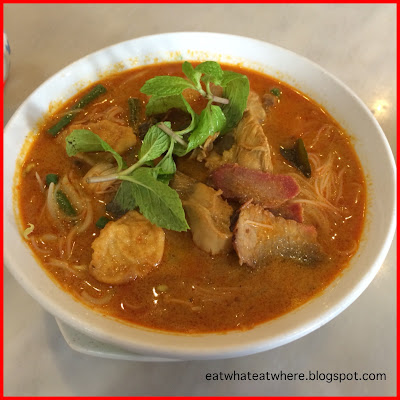 For some reason, the Curry Meehoon @ RM10.50 caught my fancy that morning.  This one came with tender curry chicken pieces (no cockles), lean char siew (of the pinkish kind), long beans and tofu puffs (even the tofu puffs seemed different from the norm). 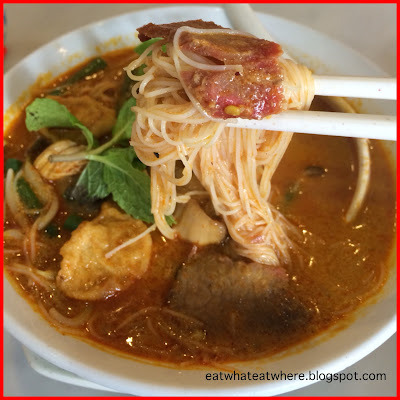 As this is not a curry mee stall, you can't request for the noodles of your choice, here it's just meehoon (as stated in the menu) and no other option.  For once, I really enjoyed my bowl of curry mee with just meehoon as the type of meehoon they use doesn't seem to soak up the curry quickly like some others (or the meehoon was cooked just right), so you get to drink and enjoy the curry without it being all absorbed by the noodles. 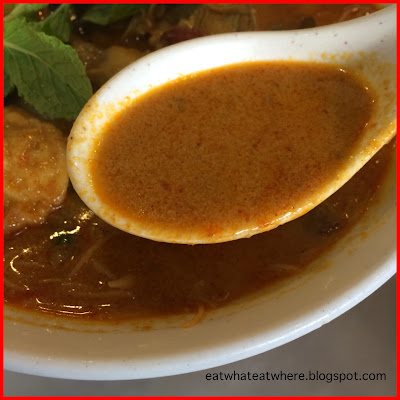 And enjoy the curry broth I did even though this version doesn't have that abundant heavenly curry oil and is not highly santan-flavoured either.  But they nailed the spices of the curry so well it didn't need a heavy dose of oil or coconut milk to make it great.  I was completely surprised that I'd enjoy this lighter version of curry that much. 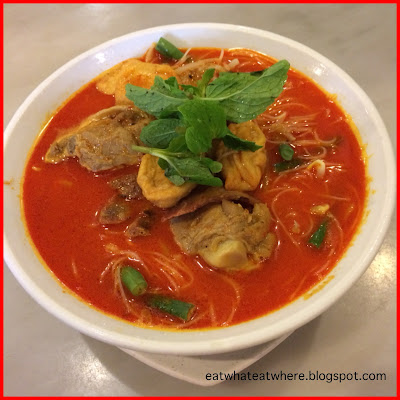 The second time we had this, the curry meehoon arrived looking more radiant and by that I meant there was more of that lovely curry oil on top (I think the pot of curry needed a good stir...haha!).  However, this time the broth was a bit under seasoned and needed some soy sauce to perk up the flavours. 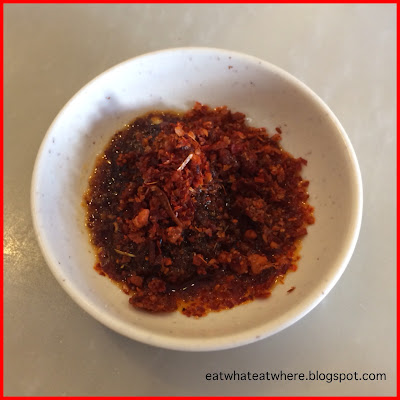 We got this chilli condiment that was a combination of a cooked, oily belacan-type sambal and a dry chilli/dried prawn sambal (somewhat similar to those you'd get with dry pan mee, only better).  Not your typical sambal to spice up your curry broth but it was so good I couldn't stop putting it on my noodles! ^.^ 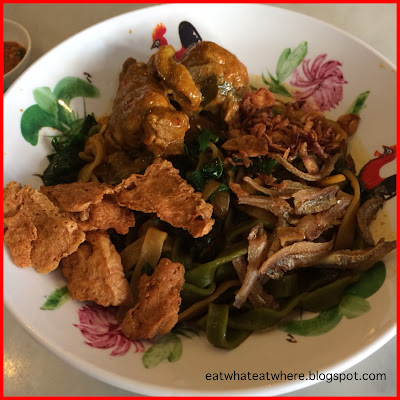 I noticed there were quite a few pan mee offerings on the menu from dry to special (soup), spicy to  dry curry and hand-torn to lor pan mee.  They must be well-known for their pan mee, so we went with an order of Dry Curry Chicken Pan Mee @ RM8.50. 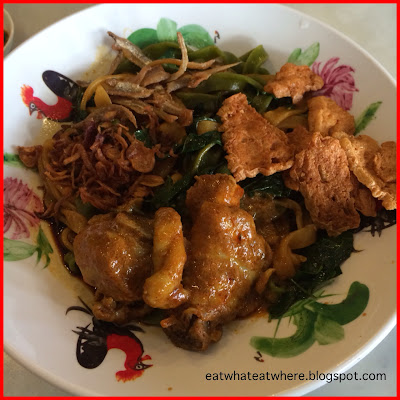 The dish came with two colours of pan mee, one yellow and the other green (must be spinach noodles) besides the ingredients of curry chicken, fried anchovies, fried fish cake, wood ear fungus, star gooseberry leaves (sayur manis or shu chai choy) and fried shallots.  When eating pan mee, I usually ask for the thin noodles but here you're not given a choice as it comes with one default type as per the menu (and that's the flat and thick type which I find too starchy at times).

The thick pan mee here I enjoyed as it was firm and nice, not starchy like the rest.  I also liked that the ikan bilis is of a better quality than most pan mee I've had.  Overall, the flavours were good and the sauce of the curry chicken was thicker and tastier, just that the meat wasn't as tender as the ones in the curry meehoon. 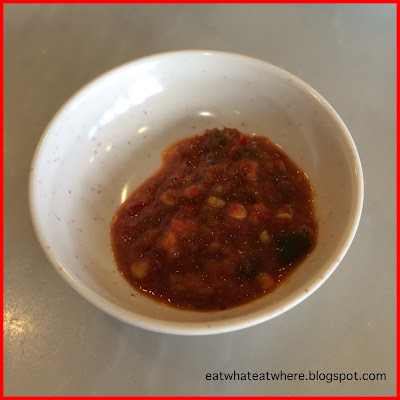 I thought that the chilli accompaniment for the pan mee was also very good.  As you can see, this one is a lot thicker than the usual watery ones you get elsewhere with pan mee. 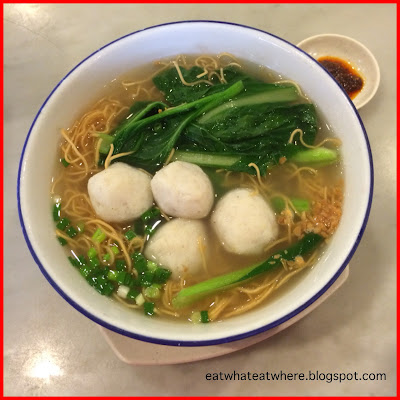 On another occasion, I tried the Fish Ball Noodles @ RM8.50 which was simply served with 4 pcs of fish ball and some choy sum in clear soup accompanied by a cooked sambal belacan.  Again, you can't choose your noodles, it's as per what's given in the menu. 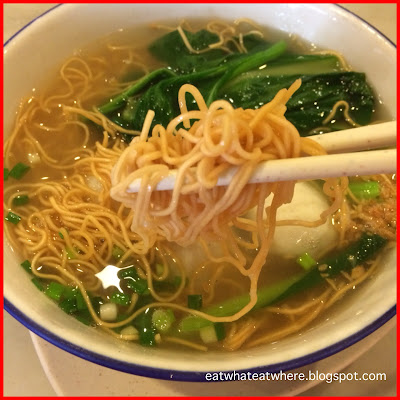 The thin noodles looked like some kind of wantan mee but with a crispy look to it resembling sang meen.  On taking a bite, it tasted more like a very thin yee meen (Cantonese egg noodles) but without the usual saltiness of yee mee.  The noodle wasn't overly crispy as it had been steeping in the soup.  I found myself liking the texture and taste of this noodle a lot. ^o^ 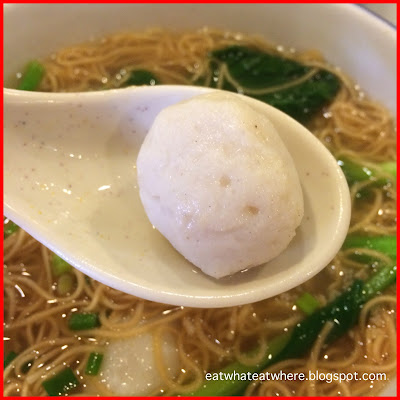 The fish balls also tasted more of fish paste than flour, so they didn't have that overly bouncy texture.  It feels homemade unlike those super bouncy commercially made ones. 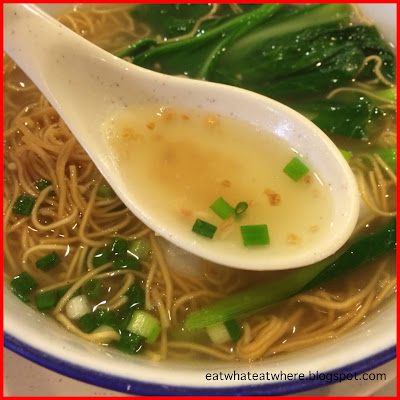 As for the soup base, which had a good sprinkling of freshly fried garlic and spring onions, it had a subtle (ching) and clean taste that I found really comforting.  Great for those who has a liking for subtle tastes. 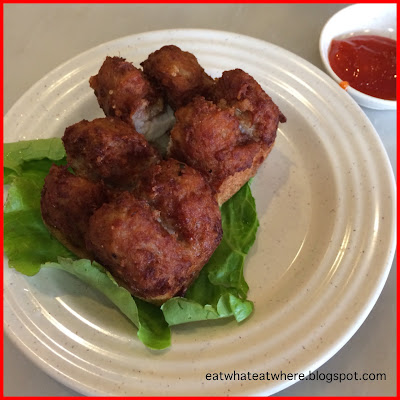 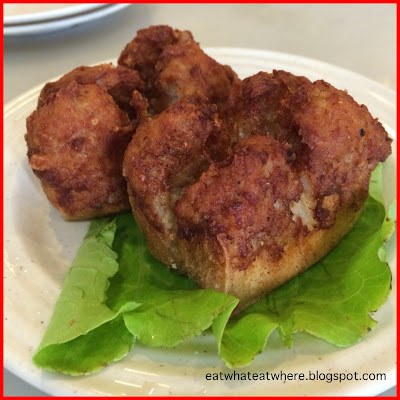 The minced meat (and fish paste?) filling and taufu was fried till it was crisp (and fragrant) on the outside while the inside of the taufu underneath it was silky smooth.  Only downside was the high price for just two pieces but I'll still be willing to order it again. 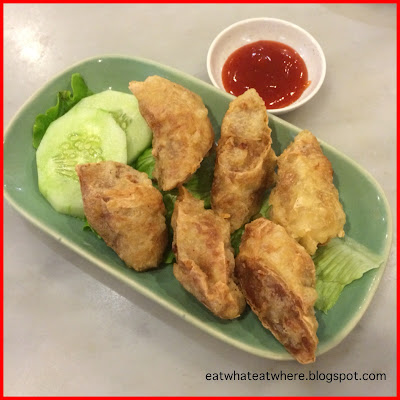 The Meat Rolls @ RM11.50 arrived looking and tasting like lor bak except it was encased in this super crispy layer of beancurd skin.  It was very delish. 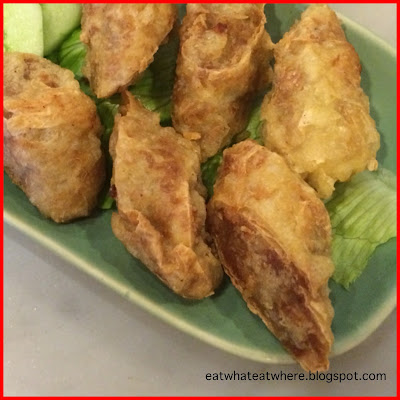 Not only that but when I bite into a piece, I felt that there was some kind of super light batter coating it (I can't quite put my finger on it).  I'm guessing that it might have been dipped in either a cornflour or potato starch slurry before being deep-fried. 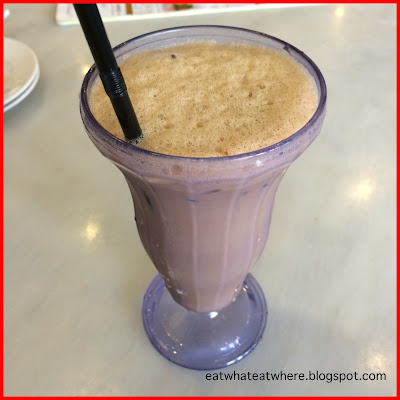 The drinks menu is also very extensive with hot & cold beverages, fruit juices and hot teas (mostly priced around RM5) and some expensive traditional teas.  The Iced White Coffee @ RM5.50 was decent but not among some of the better ones I've had. 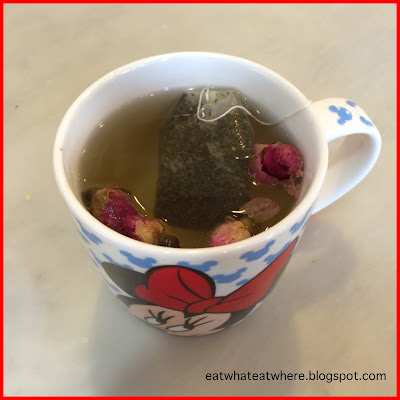 The Rose Green Tea @ RM5 had a subtle hint of rose flavour which I enjoyed.  It also looked rather pretty with dried rose buds floating in the tea....but, huh, in a Minnie Mouse cup? :P  I would think drinking it from a nice Chinese teacup would have made the experience that much more pleasant and authentic, don't you? ;P 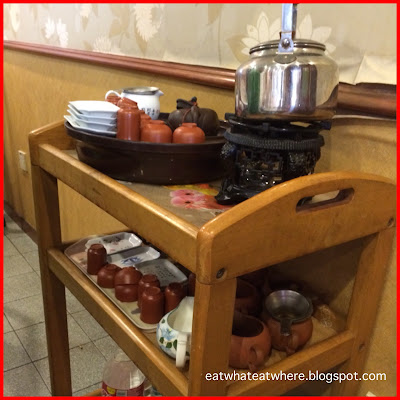 Well, they obviously have all the proper traditional tea equipment for tea appreciation since they have expensive tea going for up to RM48 in their menu! :O  My tea, by cup, was obviously too cheap for that...hihihi! ;D 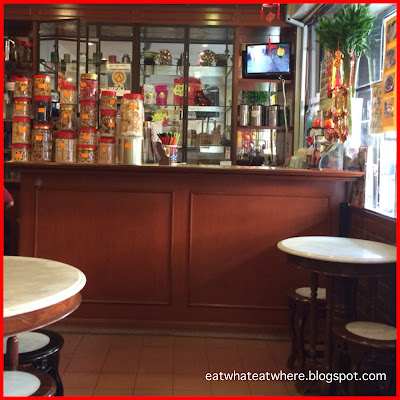 And if the CNY goodies looks familiar, that's where I got some of my CNY snacks from this year. ^_~  But in one of my post-CNY trips here, the cookies were no longer on the shelves, so you can't get these festive cookies (unlike the rice dumplings) all year round.

Check out a more recent post on the place here.

I enjoyed all the dishes I've had so far (but be prepared to pay slightly higher than norm prices for a similar type of food).  I know I'm definitely coming back to try more of what's on their menu.

Of course, you can't leave without trying out their traditional rice dumplings as it's obviously their speciality based on the name of the place.  I have tried a few of them but I think I'll blog about it in a separate post.

When I left, I took one of their business cards (from the cashier counter) and I came across Traditional Recipe outlets listed at the back of the card.  Looks like they're one and the same (and they do share more or less a similar menu), with outlets in Kota Damansara, Kuchai Lama and Bandar Mahkota Cheras, so you can check out the outlet nearest you if you wish to give them a try.  Thanks to Sean, I'm covered as I have one near me in Pandan Jaya.  Also listed in their business card was Go 2 Pan Mee (by Mdm Lee) in SS2, so I guess they're affiliated (no wonder they're well-known for their pan mee too).