We came here wanting to eat at another place but was (again) disappointed to find a rather long queue at prime dinner time.  That place was none other than Go Noodles House which we have since succeeded in eating at (a couple of times already...yay!). 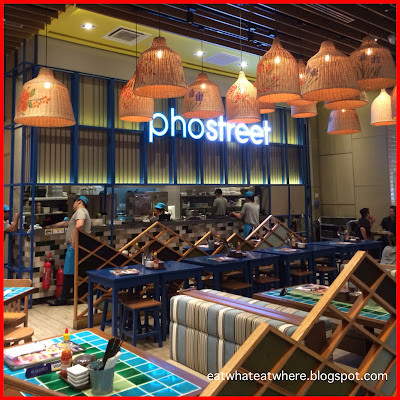 Since we came without a Plan B, we walked aimlessly around the mall and finally drifted into Pho Street @ Sunway Velocity, their second outlet after Paradigm Mall with a third in MyTown.  The place was kinda quiet compared to some of the other eateries here (great...no need to wait, we thought, we should have known better).

Vietnamese food is well known for their street snacks like fresh or fried spring rolls, pork or chicken skewers, sugarcane prawns, banh mi, banh khot (crispy pancakes) and so on.  So, we got a platter featuring three types called the Vietnamese Snack Platter @ RM18.90 with two pieces each of crispy fried pork rolls, roasted chicken skewers and prawn cakes. 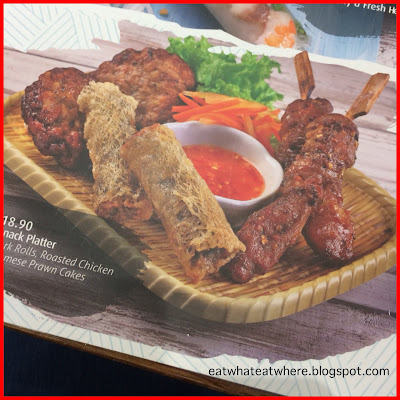 I'm sorry that you have only the pic of the menu to look at...which was probably just as well since the one in the menu actually looked better than the real deal! O_o  Of the three, I only enjoyed the fried pork rolls wrapped in rice paper as they were fried to crispy perfection. ^o^  Mental note to self: Stop pho-getting to take pho-tos of the food (sorry, couldn't resist the pun)! >_< 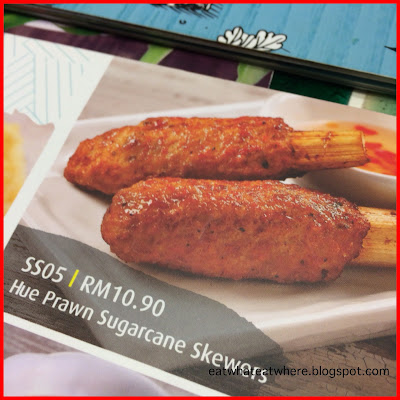 I also ordered the Sugarcane Prawn Skewers @ RM10.90 and this is how it was supposed to look like....nicely browned and grilled. 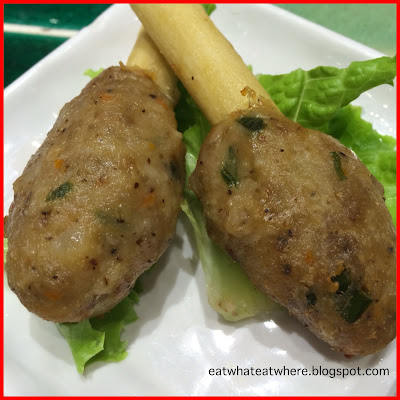 But what we got instead looked like this....all pale looking! O_o 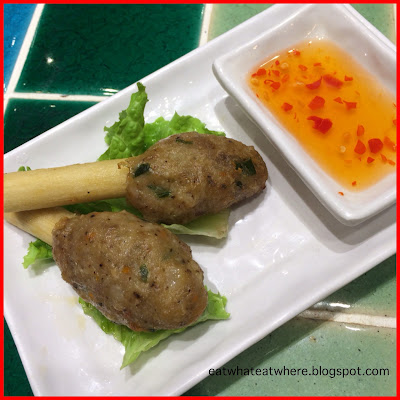 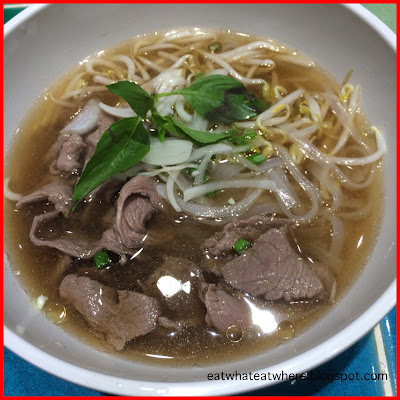 As with any place offering Vietnamese cuisine, I'm duty bound to try pho...and it always has to be beef, not chicken, for me.  So, I had the Pho Beef Tender Slices @ RM17.90 of flat rice noodles, bean sprouts, thinly sliced onions and beef slices. 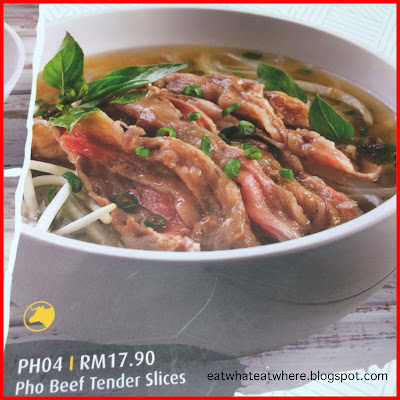 Let's just say the photo of the beef slices in the menu looked a lot better than my actual bowl.  That's because those slices were still pinkish while mine was cooked all the way through.  Luckily because the beef was sliced so thinly, they were still very much tender but the broth wasn't as beefy flavoured as I had hoped. 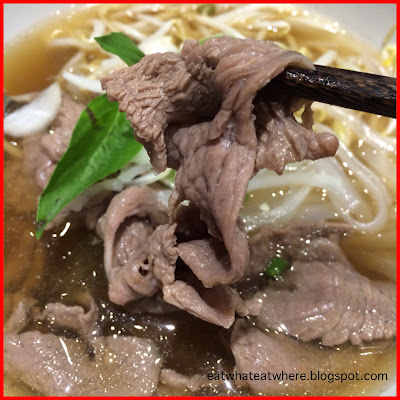 I've seen food shows featuring Vietnamese pho and they would place the beef and the rest of the ingredients in the bowl before ladling super hot broth over it to cook or half-cook the beef.  I don't know how it's done here but perhaps that's the way to not get overcooked beef! :P 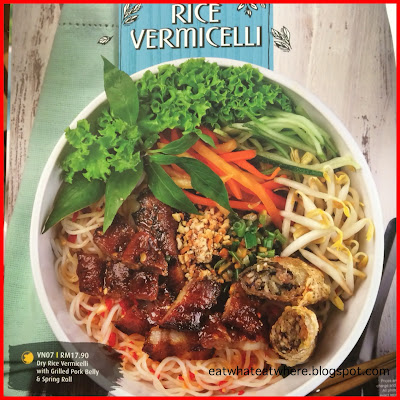 Again, the Dry Rice Vermicelli with Grilled Pork Belly & Spring Roll @ RM17.90 looked too good to resist (at least on the menu)...with well caramelised grilled pork belly (that looked almost like char siew in the pic), spring roll fried till golden and lots of freshly shredded vegetables of carrots, cucumber and bean sprouts. 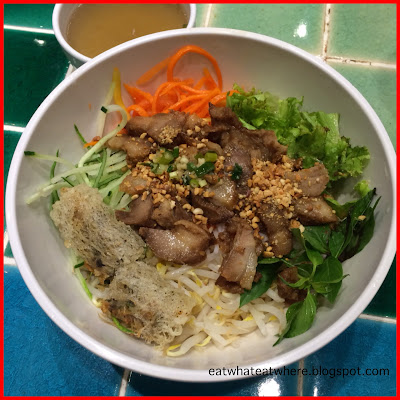 And then what we got was this....pale looking fried spring roll and grilled pork belly pieces that were also very chewy. 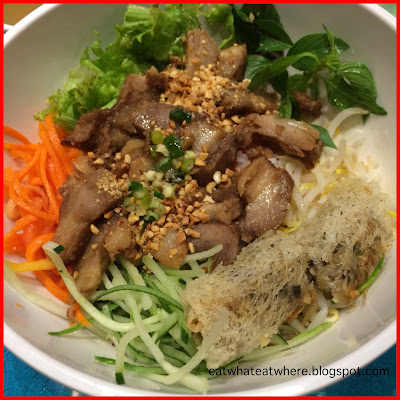 Although the noodles were tossed in a tangy dressing that tasted alright, the julienned carrot shreds were cut too coarse and proved too hard to the bite. 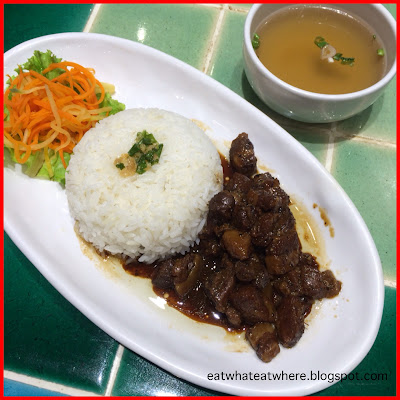 The Fish Sauce Pork Belly with Fragrant Rice @ RM17.90 had small cuts of pork belly cooked in fish sauce with a side of julienned carrot.  The pork was soft and the sauce quite delicious albeit a tad on the salty side.  And what fragrant rice?  You mean that tiny dollop of spring onion thingy on top made the plain white rice into fragrant rice? @_@ 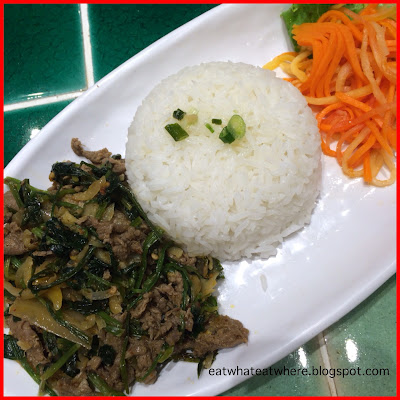 The Sauteed Chilli Sliced Beef with Fragrant Rice @ RM18.90 was a mistake as we didn't realise that this dish was fried with one of our most hated stinky herbs.  I don't usually make an effort to get to know names of food I detest immensely but if I have to make a guess, I'd say it's Thai basil. 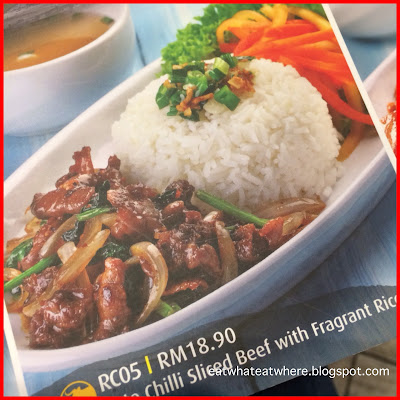 Again, as you can see, it looked nothing like the one in the menu.  This dish looked like the beef was fried with sliced onions and scallions (not stinky herbs!). 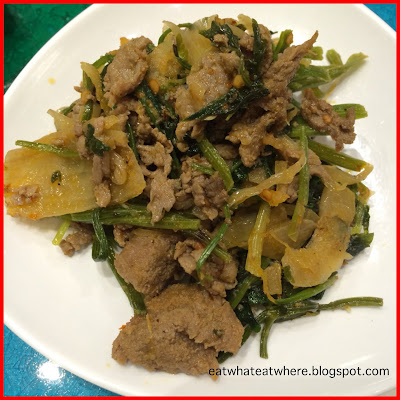 And what sliced beef?  Other than the 2 or 3 slices that were intact, the rest were so thinly sliced that most of them disintegrated into shredded or minced beef! >.< 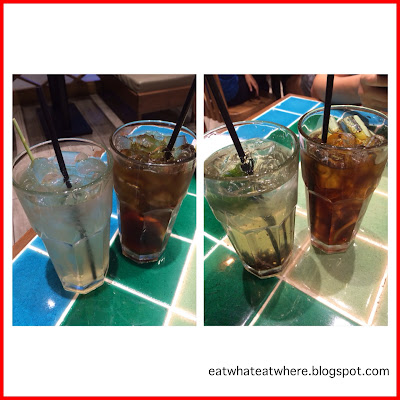 All the drinks we had (a little pricey at almost half the price of their noodles and rice dishes) of Lemongrass Drink (Cold) @ RM7.90 (non-existent lemongrass flavour), Lime Juice with Sour Plum also @ RM7.90 (that was more sweet than sour) and Iced Lemon Tea @ RM7.50 (diluted with too much ice) were big disappointments.

From the few things we tried, I'd say the Vietnamese offerings here are below average tasting.  The pho was pretty phogettable (unless you like subtle tasting broth).  The crispy fried pork rolls were the only decent thing here but they weren't unphogettable either (ok, enough with the pun already)...kikiki! ;D

Don't be deceived by the photos, the dishes don't look remotely like what you see in the menu.

I can absolutely guarantee we won't be coming back....and you can take that to the bank! :P