Salt & Pepper Squid is something we like to order when we're eating out.  But I've never made them at home coz I don't really know what type of batter will yield crispy squid.

So, I googled some recipes online and came up with many different takes on it.  Some recipes say to use plain flour and some say cornflour while others say rice flour...and then there were those that say to use a combination of different flours. 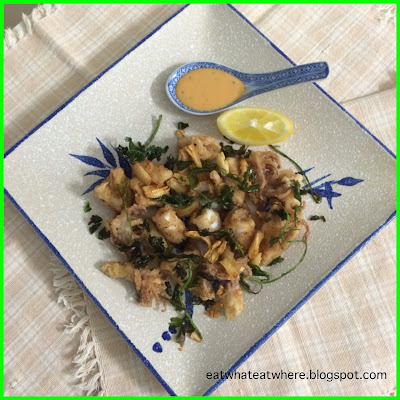 I just went with what I had in my pantry...a combination of plain flour and cornflour.  Here's my take on Salt & Pepper Squid with Garlic & Coriander. 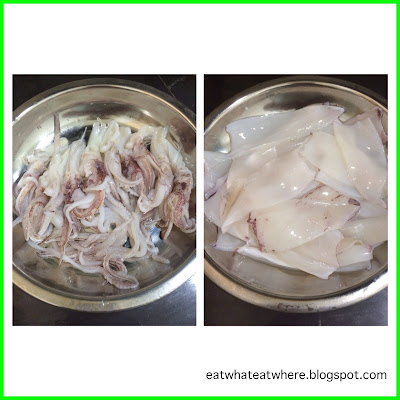 First and foremost, you have to prep the squid, of course (you can refer to my earlier post here on how this is done).  You can choose to score (or not) the squid bodies. 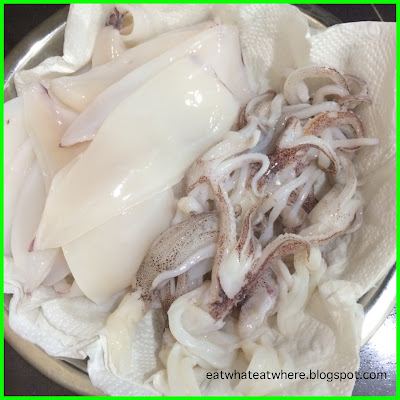 Pat dry and lay the prepped squid on some paper towels to drain off any excess moisture. 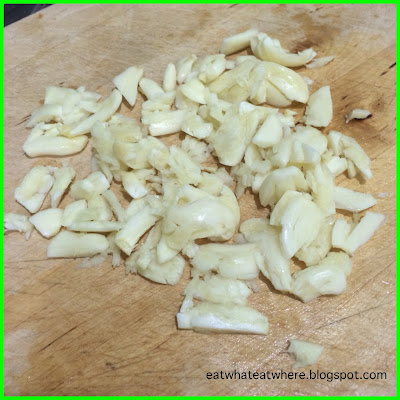 Next, I just smashed the peeled garlic cloves with the blade of the knife.  I wasn't making garlic chips, so I didn't bother to slice them evenly. 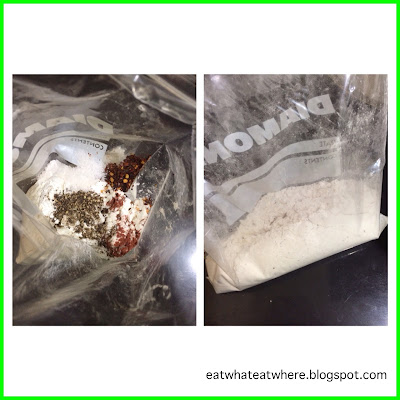 Finally, prepare the batter.  I find it easiest to just put everything in a zip lock bag (this way the flour won't fly everywhere).  Give it a good mix and it's done. 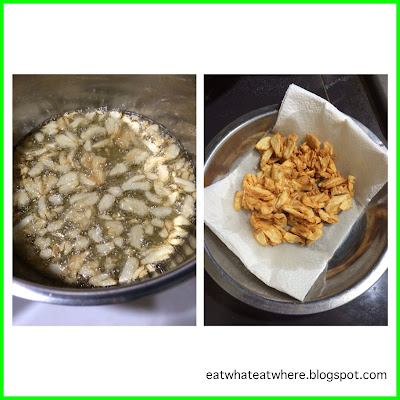 First up, fry the smashed garlic till crisp and golden brown.  Drain on paper towel. 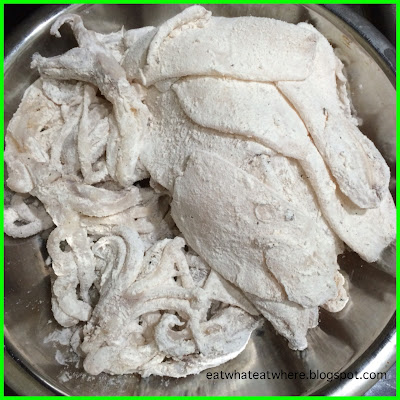 Dredge your squid in the prepared batter only when you're ready to fry.  Do not dredge and prepare them ahead of time (like I did once) as the squid will be damp allowing it to seep through the dredged flour, even if it was only for a couple of minutes (think of a sweaty face with talcum powder for lack of a better comparison...kekeke!). 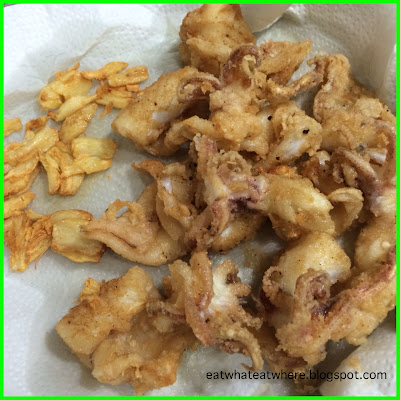 Do not overcrowd the pan of oil but fry them in small batches until just pale golden.  Drain on paper towels. 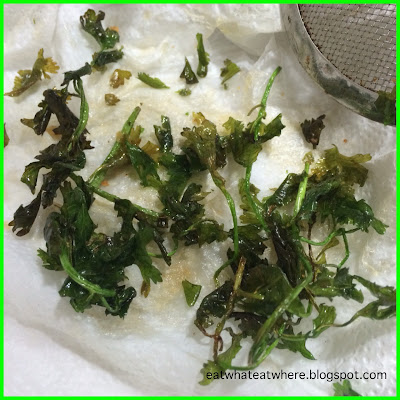 If you like, you can fry up some crispy Chinese coriander to add another dimension to your dish....plus they're quite nice to eat and offer a bit of a crunch. 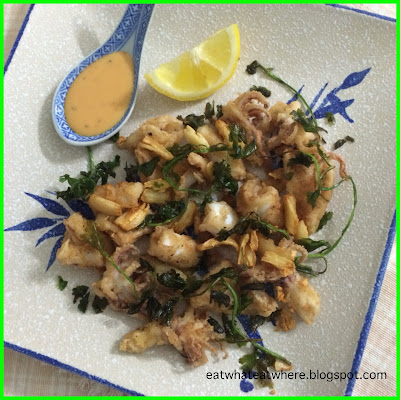 And this was my first attempt at making Salt & Pepper Squid with Garlic & Coriander which I made with just 5 squid. 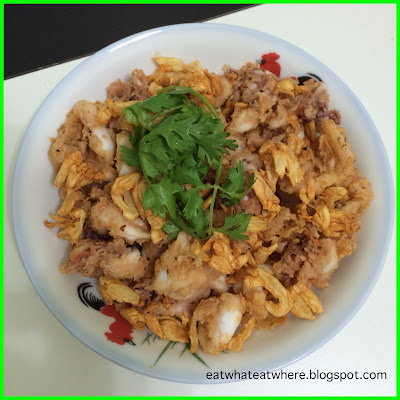 Obviously, my first attempt didn't yield quite enough squid :(  So, I made sure I made more the second time round.  I doubled up! :) 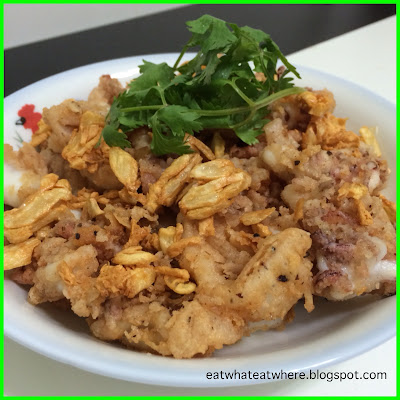 Taste-wise, the flavours were pretty good and the addition of garlic (the more the merrier) made it just that much more flavoursome. ^o^  Just that the squid wasn't as crispy as it should be but that was down to me as I fried it in very shallow oil (about half an inch only). 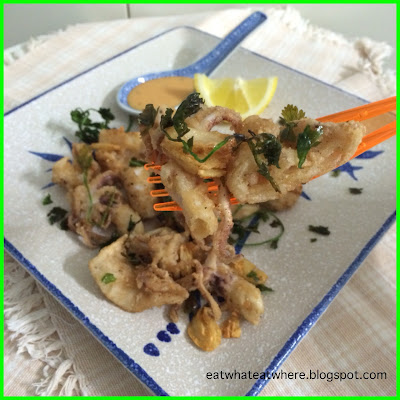 I was willing to sacrifice a bit of that crispiness by not frying it in lots of oil and having to throw all that oil out afterwards (+ I was also afraid of the mess the splattering oil will make in my kitchen).  So, if you want your salt and pepper squid to be crispy, you need it to deep-fry in a good amount of oil! :P 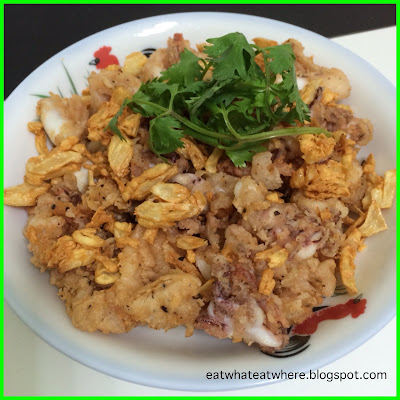 I don't know how much crispier the squid will be if they were deep-fried instead of shallow fried.  You have to try it out yourself to find out.  Also, the batter didn't adhere all that well to the squid.  I'm not sure if this was due to the shallow frying or the batter itself. 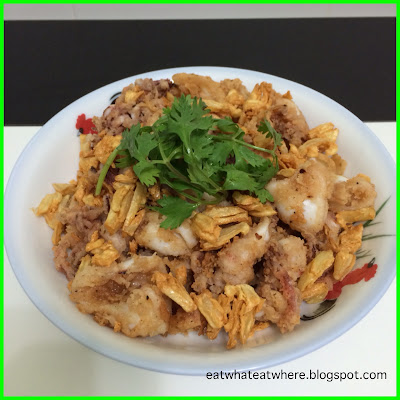 It was more crisp the first time I made it coz I made the mistake of dredging them in flour beforehand (as there was more squid to handle) when I made this the second time.  So, remember to dredge and then fry immediately if you want your squid crisp. 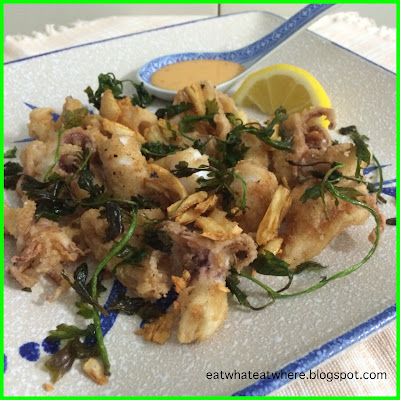 Presentation-wise, it wasn't the best looking Salt & Pepper Squid with Garlic & Coriander as the shallow oil didn't allow the squid pieces enough space to curl up properly.  Though it may come up short when compared to the super crispy Salt & Pepper Squid I get at restaurants, at least it's only half the price when I make it at home. 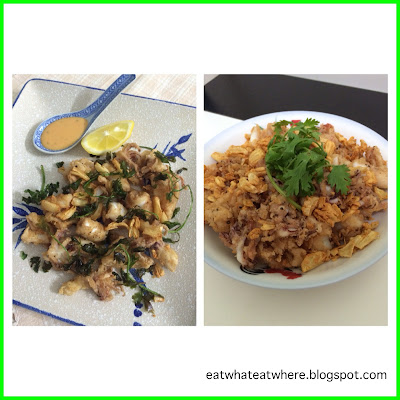 This Salt & Pepper Squid dish can be served in two ways....as a starter to a western-course meal, with a squeeze of lemon and a Thousand Island dressing, or eaten with rice as one of the dishes in a Chinese-course meal.