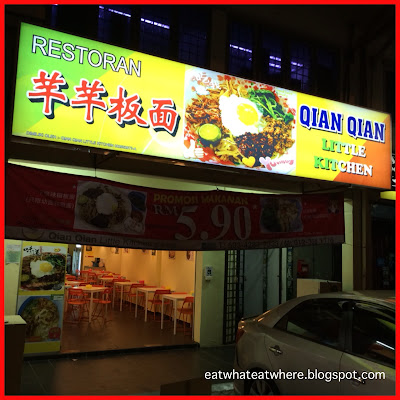 The latest pan mee shop to join the already crowded list of pan mee places to eat is Qian Qian Little Kitchen @ Pandan Indah.  Opened in August last year, this is probably the cleanest, neatest and brightest looking place (by far) among them all with a white and red decor.  So, it might look a bit intimidating to diners who think the place could be expensive. 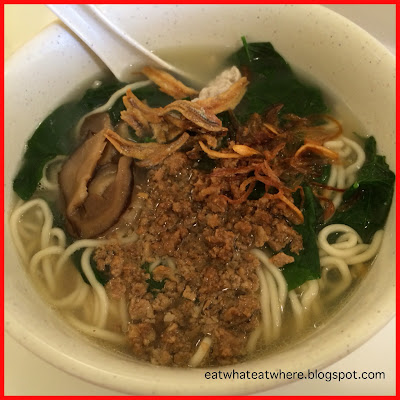 They offer six types of pan mee here...and the first one I tried was the Pan Mee Soup @ RM6.50 filled with minced  pork, fried anchovies, shredded Chinese mushrooms, pork ball, vegetables and fried shallots in an anchovy broth.  The green leafy vegetable is known by many names (mani cai or shu cai in Chinese, star gooseberry in English and sayur manis, pucuk manis, cekur manis or cangkuk manis in Malay). 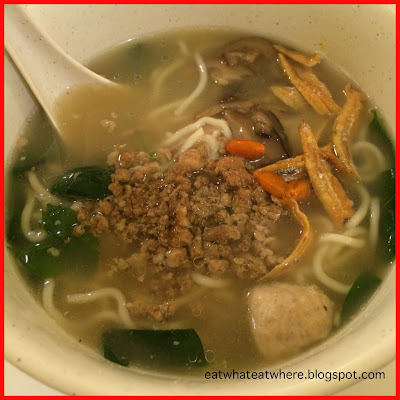 Then there's the Herbal Soup Pan Mee @ RM8 which had similar ingredients to the pan mee soup except this one had dried goji berries (or wolfberries) in the soup base.  The herbal taste was very light, hardly noticeable, great for those who don't like a strong herbal taste in their soup. 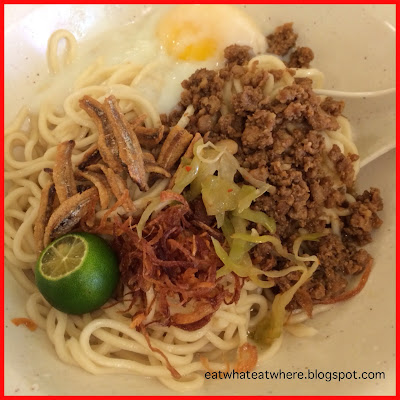 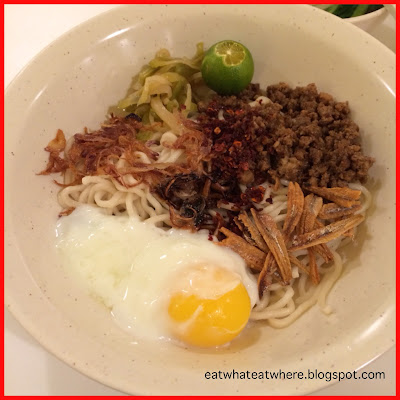 For those who don't like "white-looking" noodles, you can opt for it to be done with black sauce.  Just tell them you want it that way and they'll gladly oblige. 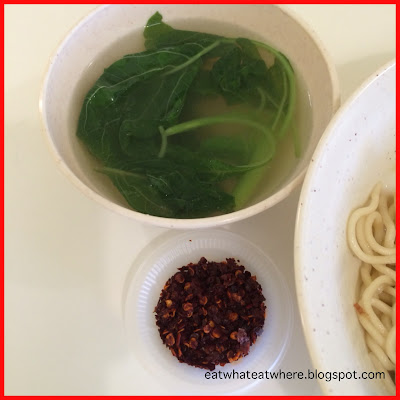 The dry chilli pan mee is served with a separate bowl of soup but the vegetable is "yin choy" (amaranth greens) and not mani cai.  You have to eat the noodle with their dried chilli mix and a good squeeze of lime. Toss everything together for a more rounded flavour in one bite.  All things said, I think the dry version is the best bet here. 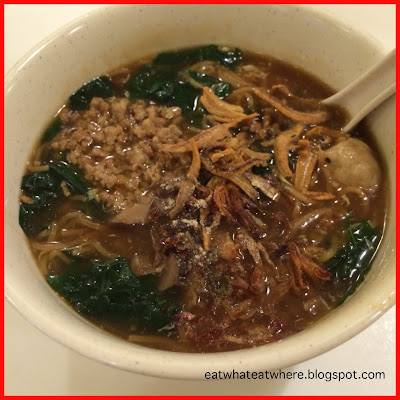 The Loh Pan Mee/Yee Mee @ RM7 (I chose yee mee) does not taste like the dark version of loh mee with its starchy sauce and egg strands.  This one just just seem to have a thicker soya-based sauce that's robust in flavour...not my favourite though. 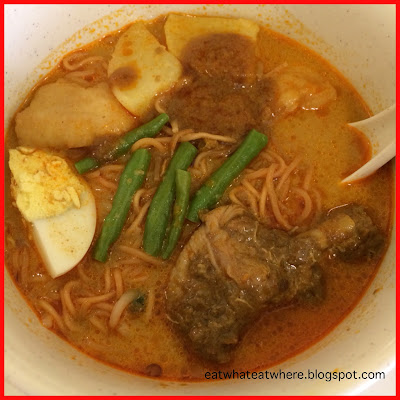 The fifth and last one we tried was the Curry Pan Mee @ RM7 that came with chicken, potatoes, long beans and hard-boiled egg.  Probably our least favourite with a thin and light curry broth.  P/S: The sixth and final one is just a vegetarian option with mushroom.

You can choose to add on extra stuff to your bowl of pan mee with additional egg, minced pork, anchovies, mushrooms, dumpling, wantan and pork ball all costing between RM1 - RM3.

Besides their speciality of pan mee, they also offer some side dishes to provide more munching opportunities for their diners. 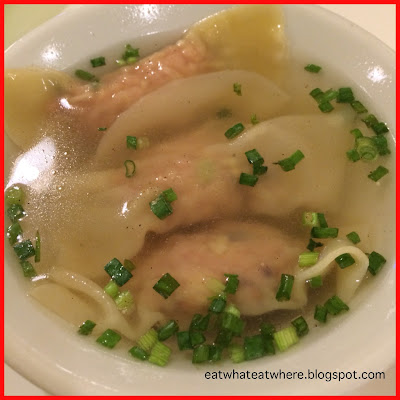 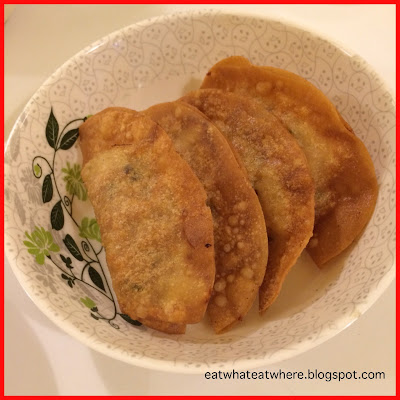 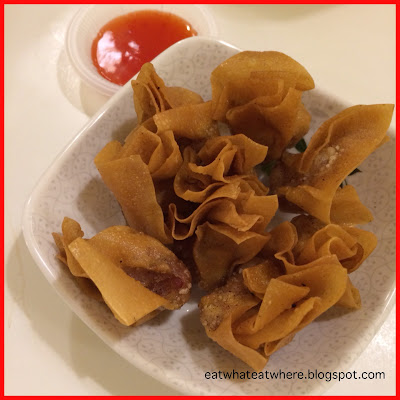 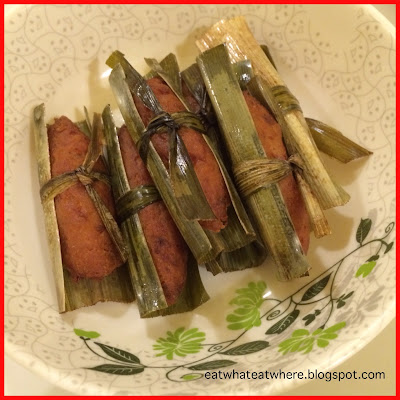 The Otak-Otak @ RM5 (for 5 pcs) is a great choice.  Unlike the usual grilled version, the ground fish paste of this one, wrapped in banana leaves, was deep-fried rendering an outside that's fragrant and crisp (almost like pandan leaf chicken).  The inside soft fish paste, although slightly lacking in spices in terms of taste, was still very addictive and a good eat overall. 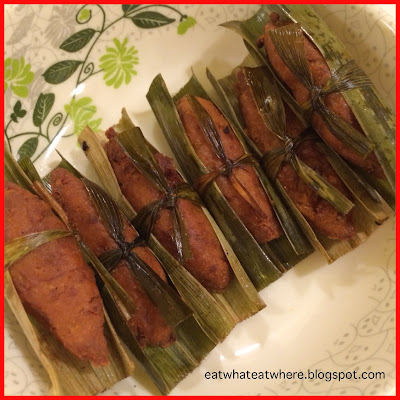 On another occasion, we got 6 pcs instead....maybe they like me and gave me an extra piece (blowing own trumpet) or maybe these were just smaller pieces!  And I can tell you one serving is never enough...for me, the best snack here....a must-order! ^.^ 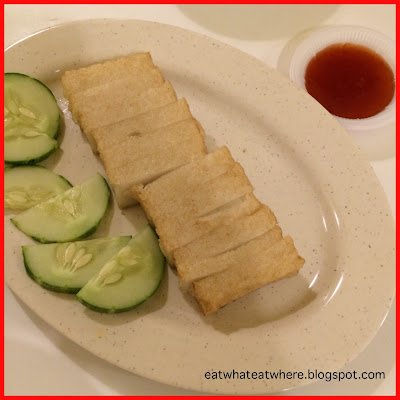 The Fish Cake @ RM6 on the other had the feel of a strip of commercially produced fish cake with its bouncy texture.  It looked like one I could buy from the market (albeit a slightly better quality one), right down to the shape and the way it was cut.  In the end, I just had to ask the proprietor and I was right, it wasn't house-made. 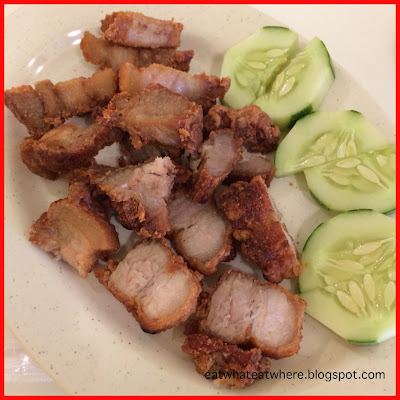 What they called Salted Pork Ball @ RM7.90 on their menu is actually deep-fried "nam yue" (fermented bean curd) pork.  Probably the least successful of all the snacks here as this one wasn't great.  I found the pork to be on the dry side and the taste of nam yue not distinctive enough. 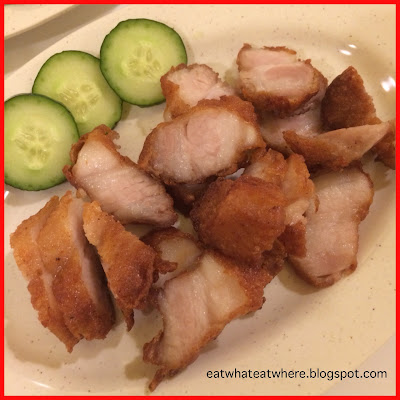 On a recent visit, we had this again and I have to say that there was some improvement as it was a lot better this time.  As you can see from the pic, the pork doesn't look so hard and dry...and it tasted a lot more tender.


Some of our drinks over a few visits (all just passable, some diluted, nothing stood out: 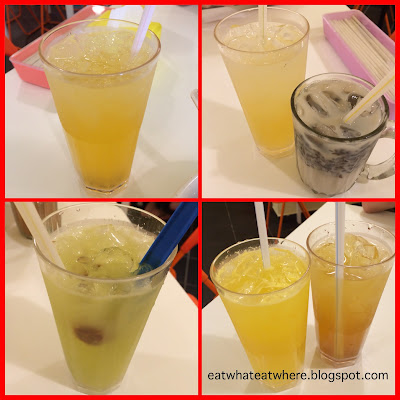 I know a lot of people like Kin Kin Chilli Pan Mee but I ate it so often at one time that I kinda grew tired of it. And Qian Qian is definitely better than Bao Bao and Face To Face.

Even so, during the many times I ate there, I found the place to be almost deserted.  I'm not sure if it's because nobody knows about the place (as they're in the quieter part of Pandan Indah) or they dare not walk in thinking the place could be expensive from the looks.  Yeah, maybe you can say it's a wee bit more expensive than the usual ones but I like it for the taste of the food and cleanliness of the place.

I do hope they can survive the competition as it's my go-to place (in my neighbourhood) for pan mee these days.  Psst...discounts are available through Upocket!