When I was last here for the famous Sisters' Curry Laksa, I noticed this stall (at the front of the coffee shop) selling Teochew porridge with its lovely array of food and knew instantly that I had to return to Restoran Sun Fatt Kee @ Seapark PJ to try it.... 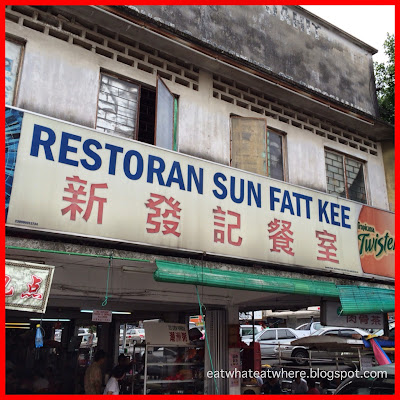 ......and I did!  You don't find many Teochew porridge stalls around as they're not as popular as Chinese mixed rice (though some of mixed rice stalls do offer porridge as an alternative).  I think it's probably because porridge is usually associated with something one would eat when one is 'under the weather'.  That's why finding a good Teochew porridge stall is considered a gem of a find nowadays! ;) 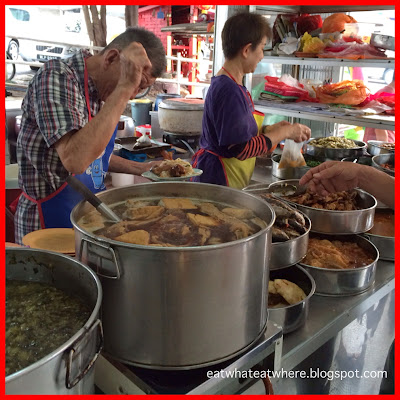 Looking at the various dishes they offer for their porridge, one is certainly spoilt for choice here....everything looked so good I had a hard time deciding which ones I wanted.  The elderly proprietor who runs this place is very friendly and courteous.  Just look at those two big metal pots of salted vegetables and braised porky stuff...the very 'heart and soul' of Teochew porridge! 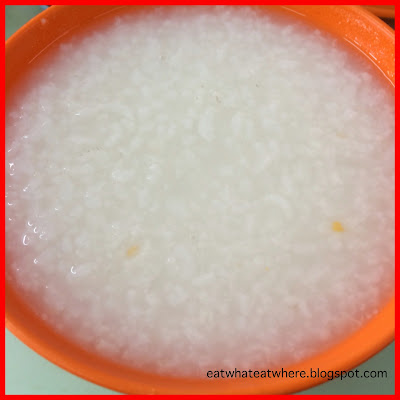 I finally made my picks and these were what we had with my porridge.  If you don't eat porridge, no problem, you can have them with rice too.  First of all, the porridge had the right texture that I liked where the rice grains are broken down enough with a watery-smooth consistency (unlike those thick gooey types). 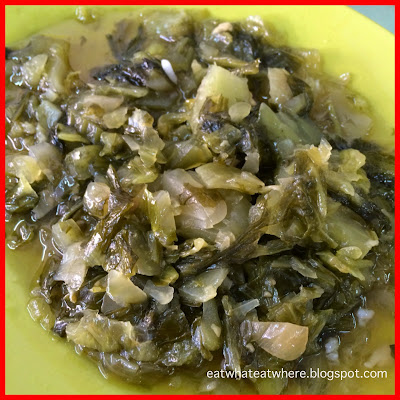 The most important dish for me in the enjoyment of any Teochew porridge is definitely their boiled salted vegetables....my all-time favourite "harm choy" and these were absolutely brilliant!  They were cooked till super, super soft and, best of all, they weren't salty at all. 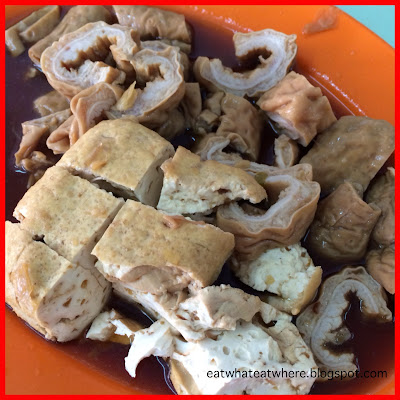 A dish we always see at any Teochew porridge stall is a big pot of braised pork, pork intestines, bean curd and eggs in a light soya sauce-based broth...a true Teochew dish!  We went with the pork intestines and bean curd.  The pork intestines were tender to the bite and, together with the braised bean curd, were even better eaten with the own-made vinegar-chilli-ginger dip.  My mother-in-law enjoyed this dish very much as the sauce wasn't too salty (it's great mixed into your porridge too). 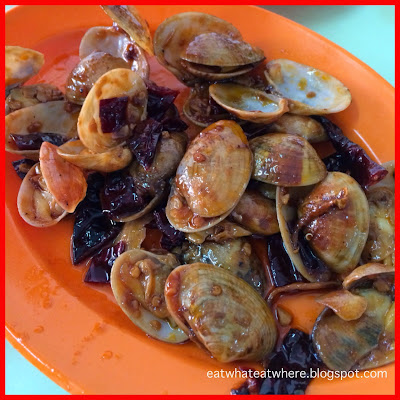 Next was the slightly spicy "la la" (clams) fried with dried chillies, garlic and ginger in a flavourful sauce.  They were very aromatic, slightly salty with a bit of heat from the dried chillies.  I can easily polish a few plates of these on my own.  They were excellent...it's a dish not-to-be-missed! 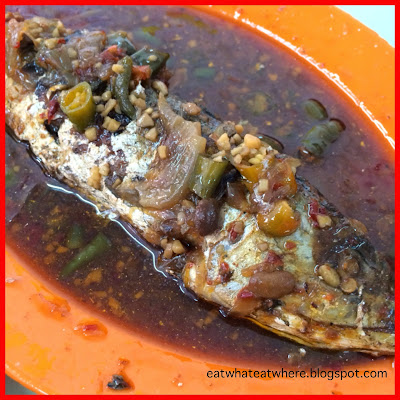 I also ordered one "ikan kembong" (or Indian mackerel) that was first deep fried before being cooked in a "taucheo" (preserved soybean paste) sauce with bird's eye chillies, fresh red chillies, onions and lots of garlic.  Overall, this dish leans towards the salty side but a great accompaniment for porridge, so it makes sense to scoop the sauce into the bland porridge to flavour it...and I did exactly that!  My spouse (who doesn't like fish) tasted the sauce and regretted that he didn't scoop some of it into his rice earlier. 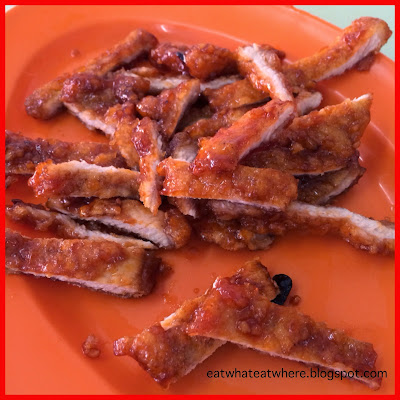 This was a plate of two pieces of pork chop that were fried and doused in a sweet-and-sour sauce.  The pork chops were cut into strips before serving it to us....and it was another decent dish.

The next dish was a request from my son and it is simply luncheon meat that had been coated in batter and fried.  The luncheon meat in itself was good already (who doesn't love it) and then have it battered....doubly good!  The batter was very crispy and, needless to say, my son liked it a lot. 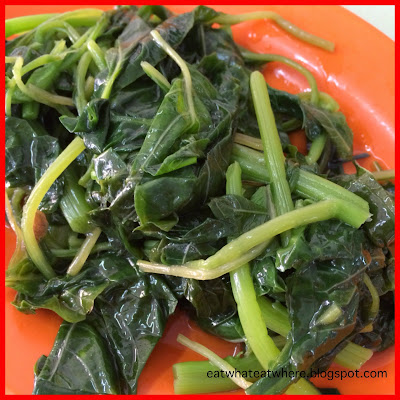 I rounded up my selection with two more vegetable dishes....one a simple "yin choy"  (Chinese spinach) stir fry as my mother-in-law likes to have at least one green leafy vegetable dish at every meal. 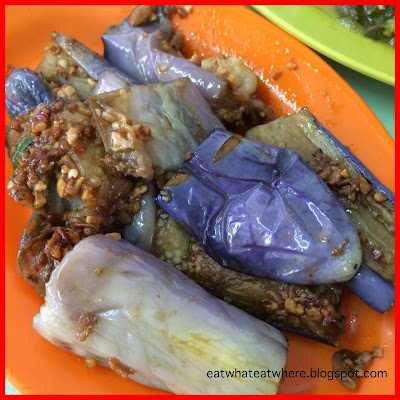 The other was a perennial favourite of my family's...brinjal cooked with taucheo, chillies, garlic and dried prawns...again a more salty dish that pairs great with porridge. 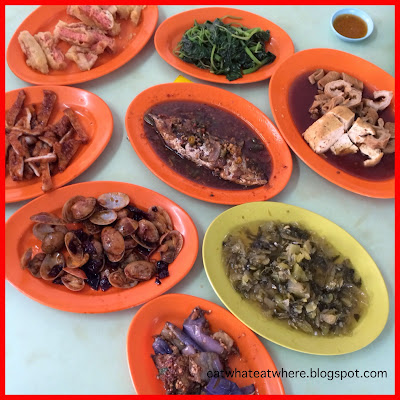 And, what was even better, this whole spread for 3 (+1) pax cost only RM32 (the +1 being my son, who had nasi lemak from a stall outside but helped himself to some of the dishes as well).
My Personal Opinion
If you like to eat Teochew porridge, this will certainly have your seal of approval...it had mine! =)  There wasn't a dish that we didn't like but my top favourites were the stuff in those two big metal pots and the spicy "la la".  In fact, some of us liked it so much that we decided to "tapau" (pack) some for lunch later.
While packing the food, I saw even more dishes on the counter....salted egg, salted fish, something that resembled "lor bak" (fried meat rolls), fried omelette with Chinese chives (ooo...I would love that), fried bean curd sheets in some spicy-sweet-sour sauce, braised peanuts, stir fry "char choy" (preserved Sichuan vegetable).....and lots more!
If you have an appetite for something "ching" (subtle in taste) on certain days, this place is certainly worth checking out.  I know I will be coming back for sure to try the other dishes they have!