#ewew cooks 3 Types of Porridge (with Chicken, Pork or Fish)

Since my mother-in-law's frequent hospitalisation from late last year till now (and subsequent recuperation), I've learned (or more liked honed my skills) to make porridge....and have gotten better at it over time. 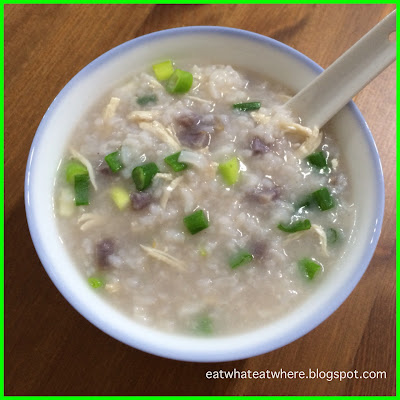 If I have to make them fast and often, I had to cook simpler versions of it that still yields the same good taste, certainly not this 10-ingredient porridge (for which I've no such luxury of time).  And along the way, I realised that the taste could be improved by just making some minor adjustments to a few key ingredients. Here are the three types of porridge I  frequently make with just three key ingredients in each rendition. 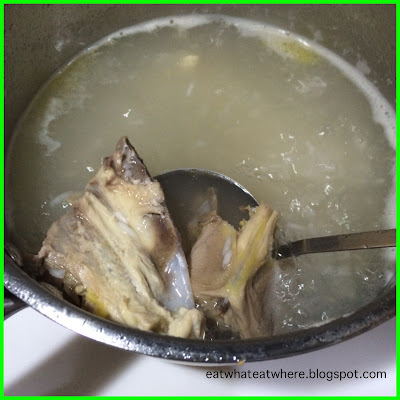 Let's start with chicken porridge.  Everyone knows how to make this and would usually make it by boiling chicken bones (or chicken parts) together with the porridge.  I do that too but have since changed a key ingredient...and that's by using choy yin kai (kampong chicken) bones instead as it tastes better than the usual broiler chicken. 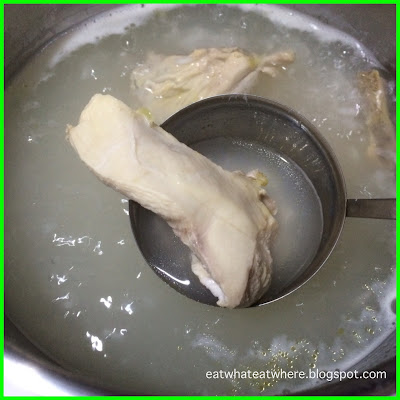 For the shredded chicken, boil the chicken tenders for just 5 minutes...that's all it takes (do not overcook the chicken by boiling the heck out of it). 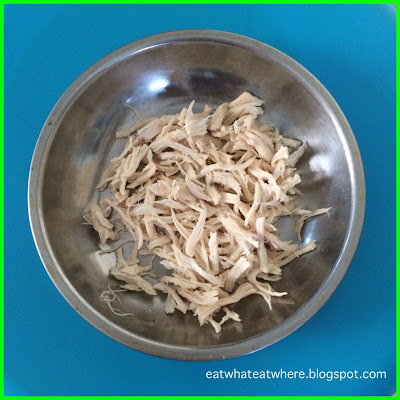 Take it out to cool before shredding (I shred it with my fingers). 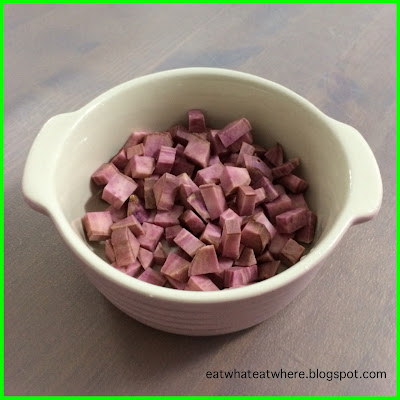 The other key ingredient is to include some form of sweet potato which brings sweetness to the porridge. Here, I'm using purple sweet potatoes.  When your porridge is about 10 minutes from being done, that's the time to add in the sweet potatoes as it takes only about 10 minutes to soften.  I season my congee with a combination of salt, light soy and white pepper + a little chicken powder too for more flavour (this is optional, of course). 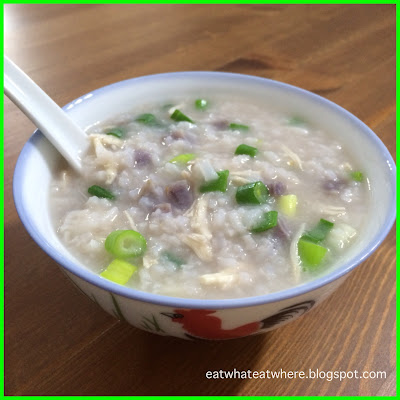 Discard the chicken bones and put in the shredded chicken.  Finally, the addition of condiments (like finely sliced ginger and chopped spring onions in the last minute just before your porridge is ready) should not be overlooked.  They just need to be warmed through and mixed in with the porridge. 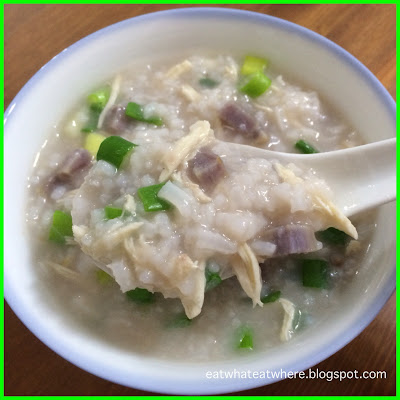 I feel the inclusion of ginger lifts up the flavours of the porridge with its freshness.  But if you don't like ginger (like my mother-in-law which I only found out of late when I noticed her fishing out the shredded ginger from her bowl of porridge), substitute by putting thick slices of ginger to flavour the porridge and take them out when they've done their job. 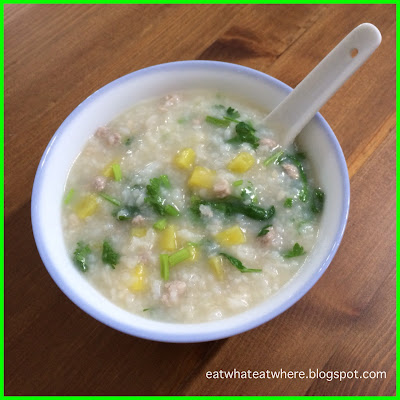 For the pork porridge, I would usually use minced pork only but was recently taught (by a pork vendor) to use yuk ngan to flavour the congee instead. 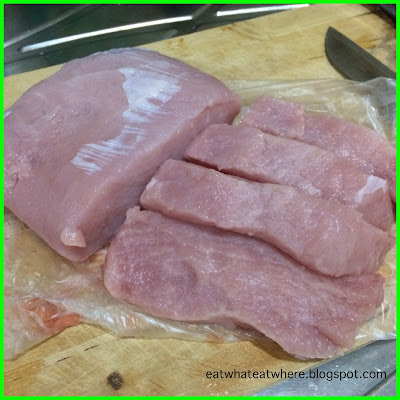 This cut of pork, according to him, lends more sweetness to the broth but the meat has to be discarded as it cannot be eaten (after cooking with the congee) as it'll be very tough.  So, I tried that and found the flavour of the porridge much improved. 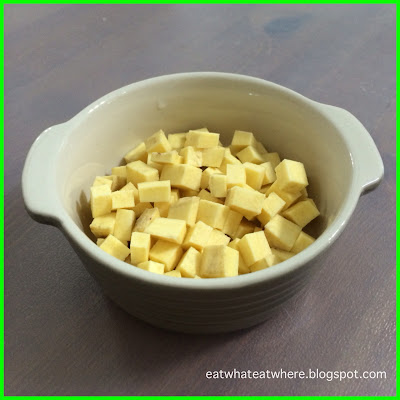 Again, sweet potatoes is a must (here I chose to use yellow sweet potatoes).  I actually introduced this ingredient into my porridge when I wanted to include some form of vegetable for my mother-in-law to have in her diet.  I then realised that the inclusion of sweet potatoes brought the congee even more flavour and sweetness. 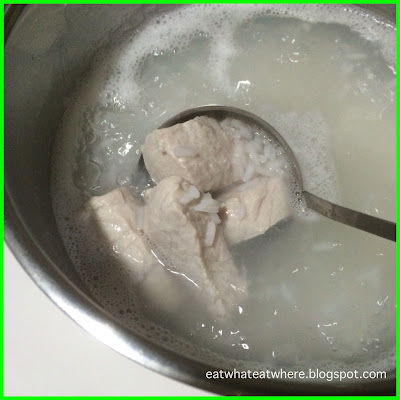 Just remember to skim off the impurities that float to the top when boiling the porridge with chicken bones or pork.  There isn't as much scum if lean pork is used (than chicken bones) though.  Discard the nyuk ngan pieces after they've done their job of flavouring the congee. 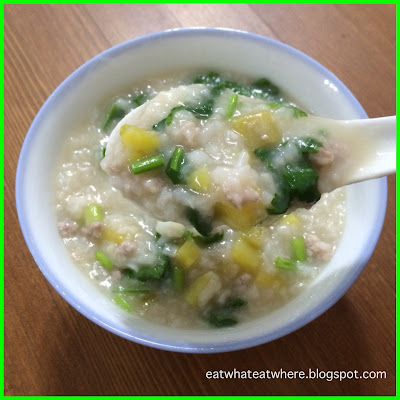 Add in the minced pork (that has been seasoned with light soy and white pepper) and sweet potatoes 10 minutes before your porridge is ready.  I also discovered that substituting chopped spring onions with chopped yin sai or Chinese coriander (which is unorthodox) made the porridge even more fragrant...but only if you like the taste of yin sai as I know some people don't.  Those who don't can stick with spring onions but those who do, I urge you to make this change. 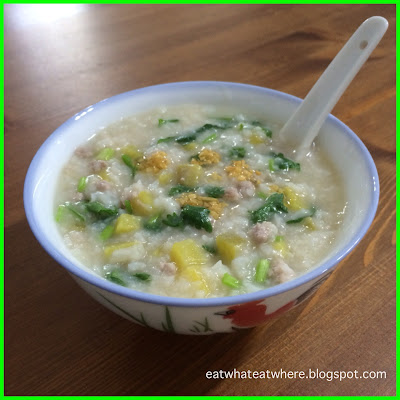 We shouldn't disregard the importance of drizzling some garlic oil and crispy fried garlic (or shallot oil and fried shallots) into the porridge to amp up flavours even further (+ a little on top just before serving won't hurt either). 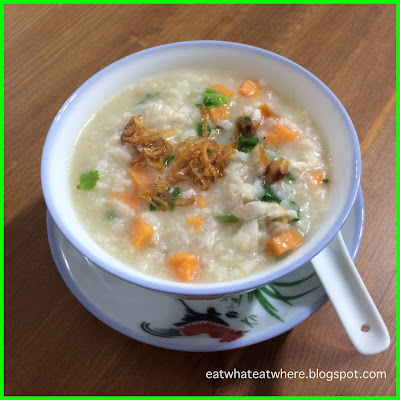 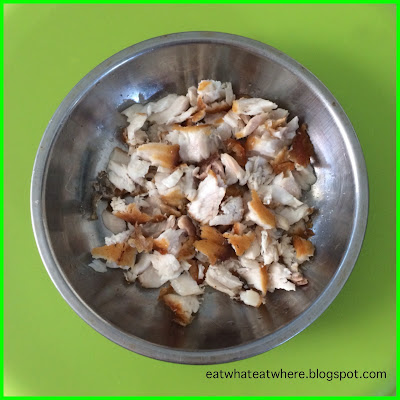 Unfortunately, we are not always that lucky to get really fresh fish, so there was one time when I experimented with frying the fish first before flaking it.  If you intend to fry the fish first, you can use a cheaper fish like kau yee (Spanish mackerel).  And if you're using a whole fish (like kau yee), you can fry the bones and off-cuts (like the head, tail & fins) first as well before adding that to flavour the porridge base. 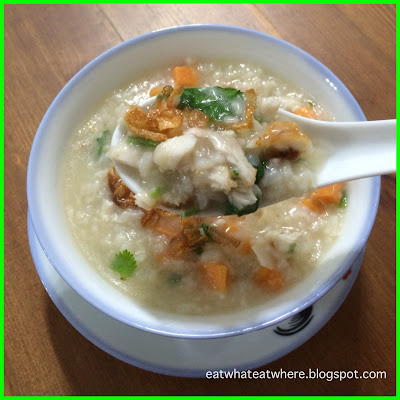 Sek pan (grouper) or ma yau (threadfin) will be better choices if you intend to boil it with the porridge (but they also taste great fried).  You can use any other fish to your liking really (but just make sure you choose the ones without too many bones and where removing the flesh will be a cinch). 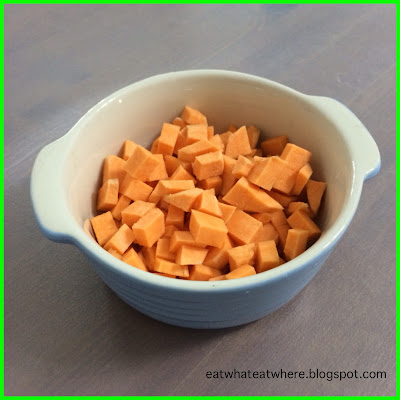 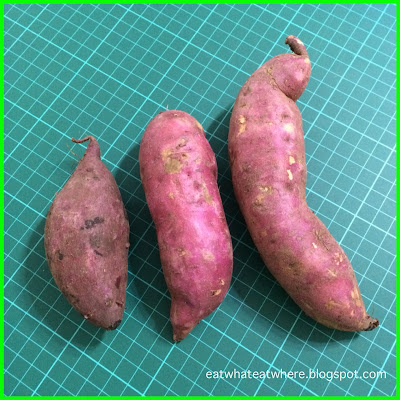 See what I mean! :P  They look almost identical from the colour of the skin.  Can you tell them apart? Starting from the left, these are purple, orange and yellow potatoes.  If not for the identification tags (at supermarkets) that state the colour of the sweet potatoes, I would have to ask the vendor at the market as they can be quite difficult to differentiate (with same coloured skins yielding different coloured flesh inside).  Take for example a Japanese sweet potato, the skin is purple but the flesh is yellow. ;P 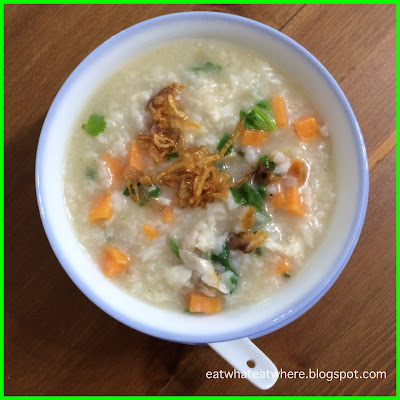 I added back the flaked fish and chopped Chinese coriander to the congee in the last minute.  I found that the pre-fried fish tastes more fragrant in the porridge without any of that fishy smell. 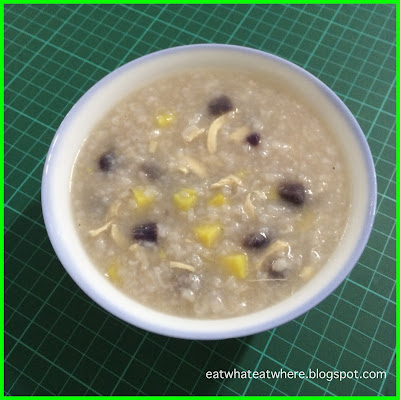 You can also use a combination of sweet potatoes if you like.  There are many types of sweet potatoes in the market, different ones from different areas/countries may taste different.  Depending on the type you buy, don't be alarmed if your porridge turns out purplish (that happens if you've gotten yourself a Japanese purple sweet potato)! :O 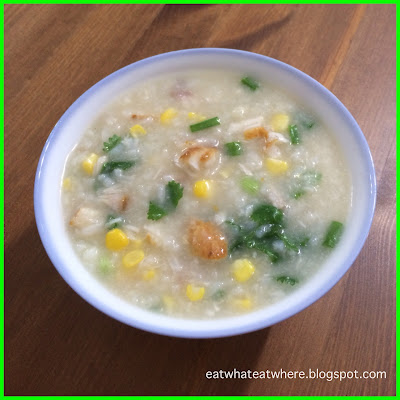 Besides sweet potatoes, the use of sweetcorn, as its name suggests, adds sweetness to the porridge as well. Sweetcorn takes a good half hour to soften (unlike sweet potatoes), so put it in earlier in your congee making process.

So, through some experimenting with a few minor changes to some key ingredients, I was able to improve the taste of my porridge.  To recap:

Step 1 - Use the right meat to extract the flavour for your porridge base (from choi yin kai bones to pork nyuk ngan to frying the fish and fish bones first).

Step 2 - Include some kind of sweet potatoes (of any colour, be it yellow, orange or purple) or sweetcorn as it lends further sweetness to the congee.

Step 3 - Don't forget (or underestimate) the importance of condiments (like spring onion, yin sai, fried garlic & shallots) to amp up flavours even more.

To congee lovers out there, try experimenting with these changes to see if it makes a difference in your congee...and hopefully it'll transform your porridge by making it better as it did mine! ;)  It takes about 45 minutes to an hour to boil about 1/2 cup of rice that yields 3 - 4 bowls of porridge.  It's worth the effort and it's one of my one-pot wonders.  I love to eat congee as it's something that's light and easy to digest, not to mention healthy too.