Summer at 17°C Cafe @ Connaught Avenue, Cheras is a 4-month old cafe that opened up in Cheras serving breakfast (more like brunch), lunch and probably early dinner (they close at 7pm).  The name of the place sounded (to me) like one that offers cold desserts along the lines of ice cream, gelato, sorbet or frozen yoghurt of some kind...but it wasn't. 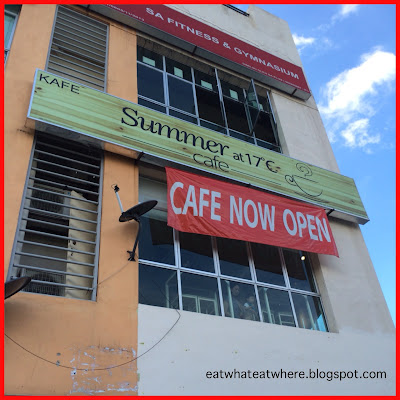 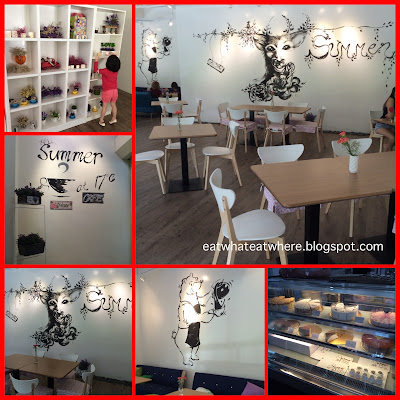 Walking into this sunshine-laden cafe, located on the first floor, it reminded me somewhat of Wild Sheep Chase, a cafe I visited in Taman Desa which specialises in souffles.  It had similarities from its pristine white cafe with splashes of beige and brown to lots of natural sunlight through its floor to ceiling windows, even down to the furniture from Ikea. 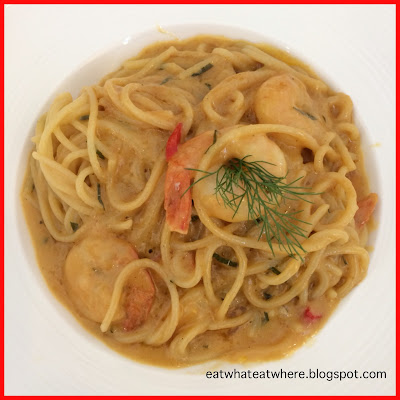 Since I'm a fan of salted egg yolk (my friends too), it was a no-brainer that we'd start with the Salted Egg Yolk Pasta @ RM18 (also a chef recommended dish) made with spaghetti and pan-fried prawns in a salted egg yolk sauce.  Don't be fooled by the seemingly small dish, the portion was quite filling. 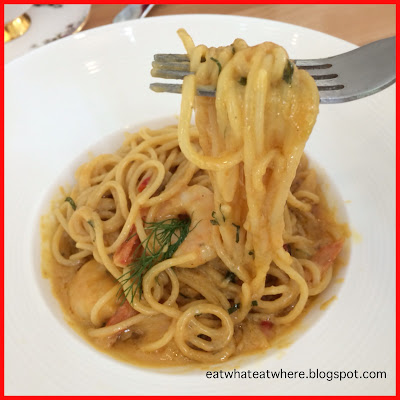 I found about five fresh, medium-sized prawns in the pasta which I think is pretty decent for the price.  The sauce, generous and thick, coating each strand of pasta lovingly, had loads of salted egg yolk flavour with a hint of fragrance from the curry leaves.  As the sauce is rather rich, the dish is good if shared (may be best this way just in case it proves too cloying for one to finish on her own). 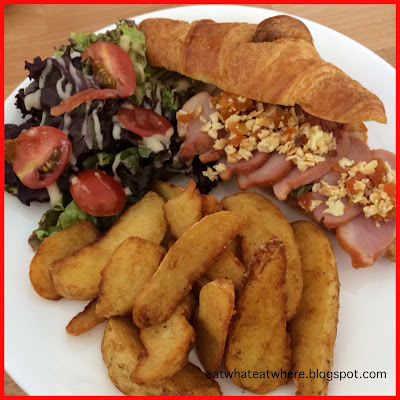 Our next dish, Mr Quacker @ RM19, featured smoked duck slices with a fruit-&-nut dressing, served in a croissant, accompanied by potato wedges and salad greens of lettuce and cherry tomatoes. 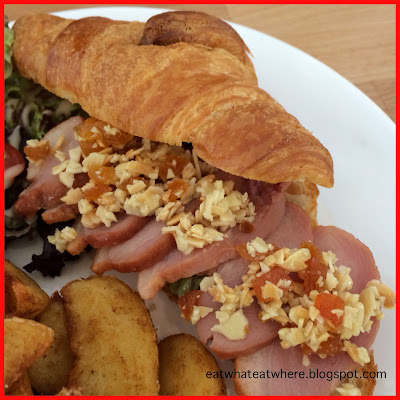 Overall, there was nothing to fault the dish, the croissant was light and crispy, the duck slices...savoury and nice tasting with chopped dried apricot and almonds, and the potato wedges...fluffy with a crisp crust on the outside.

I noticed that two of the dishes (that I saw on other blogs) which I wanted to try were no longer on the menu when I enquired.  One was the beef stew which has since been replaced with a chicken stew.  The other was the pan-seared dory fish with baked portobello mushroom as I was curious to find out after reading polar opposite reviews of the dish.  But it was not meant to be as they have temporarily ceased making the dish (until they can find a suitable substitute) because of complaints about the fish (well, at least now I know which review was more reliable...hehe!). Another recommended dish was their Summer Asian Chick but the pic of a whole slice of cheddar cheese on top is a no-no for me. 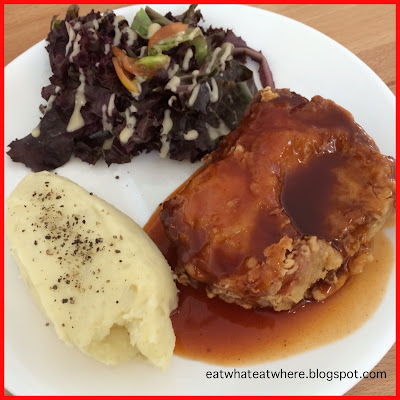 In the end, we settled for the Sweet & Spicy Chicken Chop @ RM18 served with a salad and mashed potatoes (or you can opt for rice if you prefer). 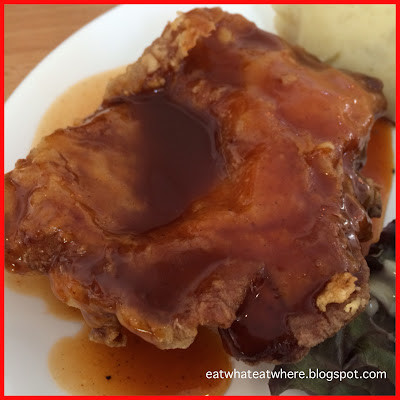 The chicken chop came with a nice crunchy skin and succulent meat drenched in their appetising house-made sweet and spicy sauce that had nuances of sweet, spicy (just a hint) and sour (only slight)...which made me think that perhaps Worcestershire sauce played a part? 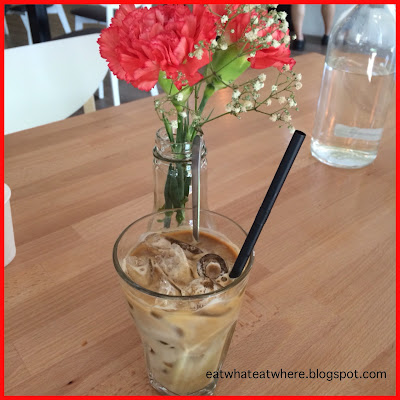 As for the drinks, we went with a coffee, a hot chocolate and one of their signature cold drinks.  The Iced Latte @ RM11 was certainly satisfactory. 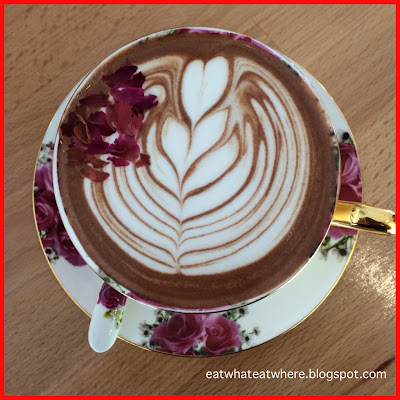 For chocolatey drinks, they have the usual hot chocolate and mocha but I convinced one of my friends (who is a fan of hot chocolate by the way) to try something different for a change, the Rose Chocolate @ RM12. 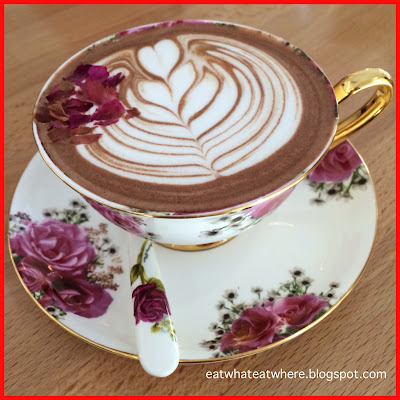 I confess...the only reason I ordered this Rose Chocolate was because of how picture-perfect it looked...haha! :D  It was certainly pretty as a peach (or rose in this case)....don't you think?  And what's even better...you get to drink it from an elegant English bone china tea cup look-alike! ^.^ 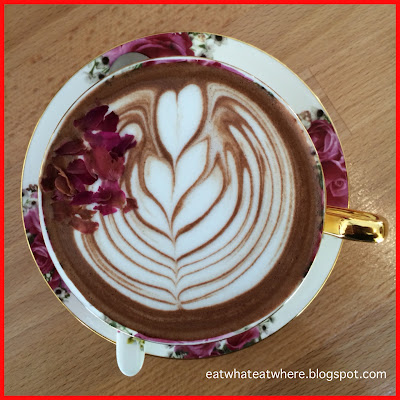 The hot chocolate was nice and thick with a very subtle rose taste that will delight some taste buds but may need some getting used to by others.  I unfortunately fall in the latter category...I do like floral flavours in teas but not so much in hot chocolate. 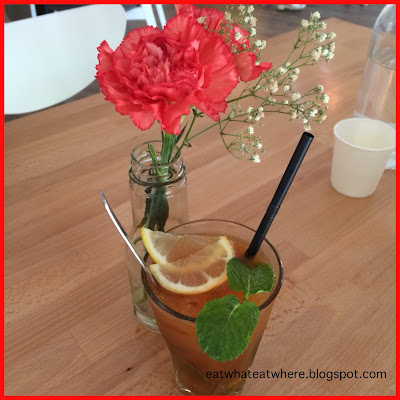 The Summer Lilikoi Tea @ RM11 was a blend of passion fruit, lime & mixed tea that tasted a little sourish but very refreshing.....I like! ;)

I like the bright and cheery environment but more so for the spaciousness which makes it a great place to sit and chat for hours with friends (unlike some smaller, cramp cafes which make you feel that you've overstayed because of the many customers waiting for seats).

Though they serve the usual, simple cafe food here, the reasonable prices of under RM20 for most of their dishes, coupled with friendly service, will be what endears their customers to them.

I didn't get to try their egg waffles this time, perhaps on my next visit! ^_*

Email ThisBlogThis!Share to TwitterShare to FacebookShare to Pinterest
Labels: Another One Bites the Dust (aka Closed), Breakfast/Brunch Cafes, Food: Western, Location: Cheras