It's been a while since I last stepped into Din Tai Fung @ Pavilion, an award-winning restaurant of Taiwanese origin (with Din Tai Fung's Hong Kong branch being awarded one Michelin star). 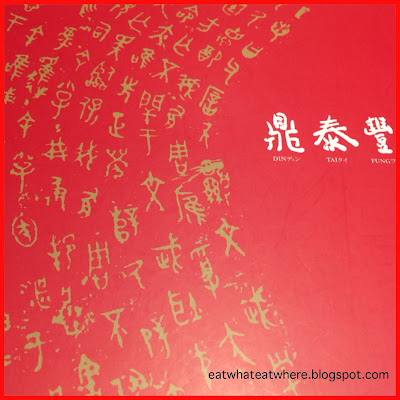 With its latest accolade of Innovative Restaurant 2014/15 at the 19th Malaysia Tourism Awards, this restaurant is set to continue with its legendary status as an exquisite dumpling house.  And that was exactly the case (even now) since the place was packed to the brim with loads of customers (surrounding the place) waiting for seats (and an almost unobstructed snapshot of the place was near impossible). 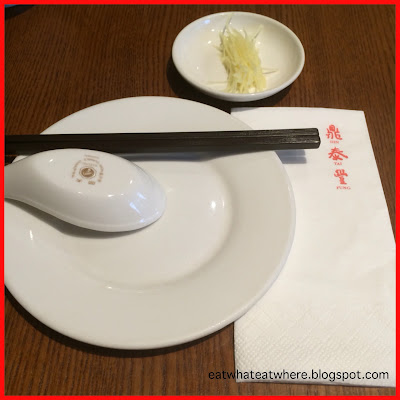 But I wasn't here for their legendary dumplings this time (you can read that in my previous post here).  The intention for this latest visit of mine was to try the three new dishes they introduced recently (in May). 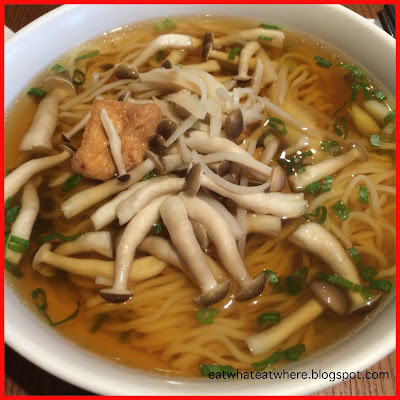 The first dish to arrive was their Noodles with Mushrooms & Egg Tofu @ RM15.50.  Although this wasn't one of the three new dishes, it was still a relatively new dish that was introduced late last year.  The bowl was filled with loads of fresh shimeji mushrooms, shredded bamboo shoots and tofu in a heartwarming light broth. 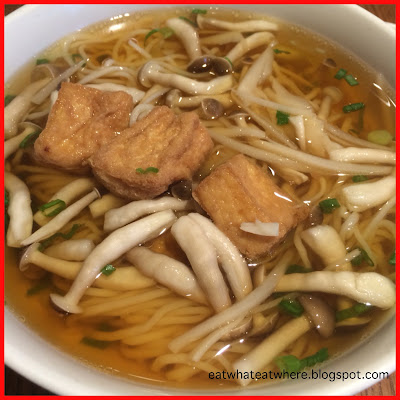 Initially, when the bowl of noodles arrived, I saw only one piece of tofu....and I thought...yikes! O_o  Then I dug into the bowl and found four...phew!  The pre-fried silken tofu pieces were silky-smooth and very tasty. 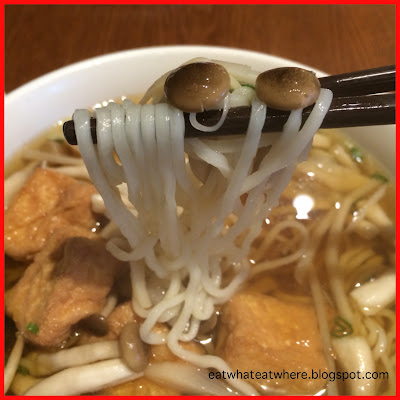 If you're in the mood for something with a delicate and subtle flavour (ie. "ching" or light tasting), then this soup noodles will be a good choice for you. 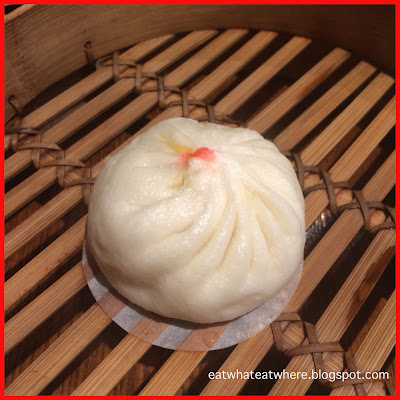 The next dish that came was one of their three new dishes, Steamed Chilli Crab & Pork Bun @ RM5.90 per pc (RM17 for 3 pcs).  Even though I ordered only one piece to try, it was still served in their usual big ass bamboo steamer....this was one lonely looking bun! :D 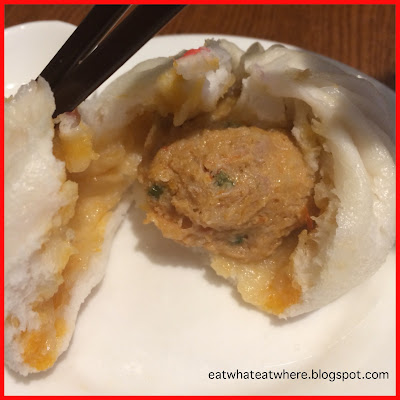 Let me show you the inside of the bun....basically it was just a minced pork ball with a barely-there flavour of crab and a very faint taste of chilli.  I was glad I ordered only one....it's not something I'll have again. 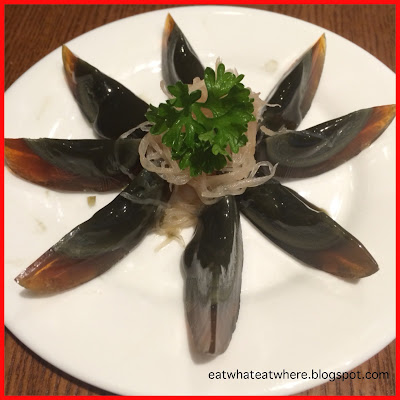 But the biggest lure for me to visit was the appetiser of Taiwanese Century Egg @ RM8.90 served with some pickled ginger.  I can absolutely devour more than one plate of this (and wished there was more of that pickled crunchy ginger on the plate).  I actually expected this to be served first, seeing that it's an appetiser, but it was the second last dish to arrive which totally didn't make any sense to me coz all that's needed is to peel the eggs, cut them and put some ready-made pickled ginger on top...that's it, no cooking required whatsoever! >_< 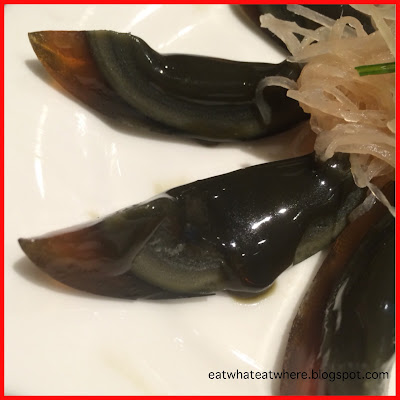 If poached eggs are perfect with runny yolks, then this is its equivalent...perfect century eggs with runny yolks.  Just look at that luscious yolk dripping down onto the plate...I adored the creamy consistency! ^o^  In fact, judging from the wedges of the egg, some of the yolk must have been lost when it oozed out while they were being cut...drat!

The last of the three new dishes, the Yam Paste with Gingko Nut @ RM9.90 I didn't try coz I'm not a fan of gingko nuts or something with a pasty, gooey consistency (though I have an affection for yam).

I absolutely love the Steamed Chicken Soup here and wanted to try their newer Truffle Chicken Soup but had a change of mind when I saw the price...RM35....and for such a small bowl! >_<  But if it's any good like the Truffle Xiao Long Bao (XLB) I had previously, then it's probably worth the price (perhaps some other time). 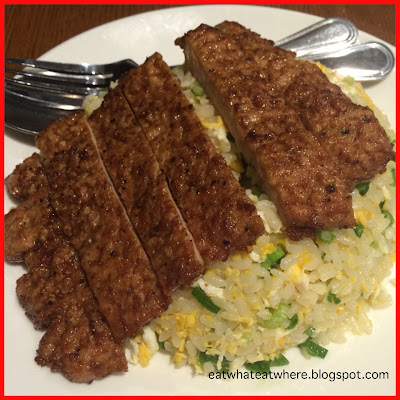 Only after I've finished eating my main (noodles) + all the other dishes did our other main, the Pork Chop Fried Rice @ RM21.50 finally appear.  Still as good as last time, the only difference I see is that the pork chop is no longer served separately. 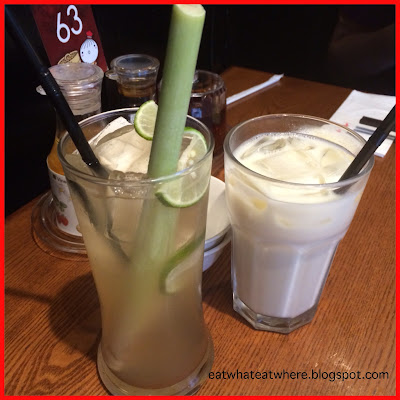 The Lemongrass with Lime Juice @ RM10.50 was bright and refreshing, slightly sweet but with a good dose of lemongrass flavour.  The big stick of lemongrass enhanced the flavour further and also acted as a stirrer.  The other drink was a plain Soya (Cold) @ RM7. 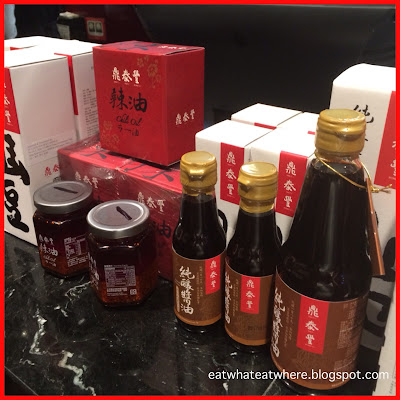 The condiments you find on the table like vinegar, soya sauce and chilli oil are also available for purchase at their payment counter.  I noticed their vinegar is no longer dark coloured like it used to be but more like rice wine in colour.  It seems the chilli oil is sold at RM25 a bottle...thank you but no thanks...not because of the price..but because I don't like their chilli at all.

Although I'm glad that the standard of the food has been maintained, the service from the kitchen was far from smooth.  The waiting period for our food leaves much to be desired and, if you want to eat here, do not expect your food to arrive in the right order that it should be.  It all depends on how busy each individual food station is (steaming station, noodles station, frying station, etc.) with their orders as they seem to churn out food independent of each other.  I guess if you choose your timing wisely (like during non lesser peak times), hopefully you may end up with a much better dining experience. ^_*

But having said that, the food is still good, some decent but mostly good...plus it still serves one of my favourite XLBs.  The only downside, their prices seem to have risen quite significantly but their portions still remain small...even a vegetable dish of pea shoots ("tau miew") can cost RM26....haiz!