La Cucur @ Suria KLCC is one of those places I'd stop-over for breakfast before starting on my shopping in KLCC because of its convenient location on the concourse level just above the car park. 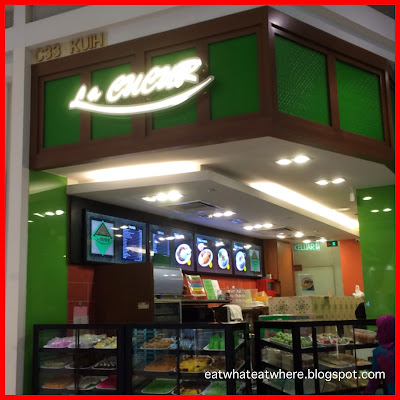 Its popularity has seen this small eatery (though it used to occupy a bigger space before) sticking around for more than 15 years. 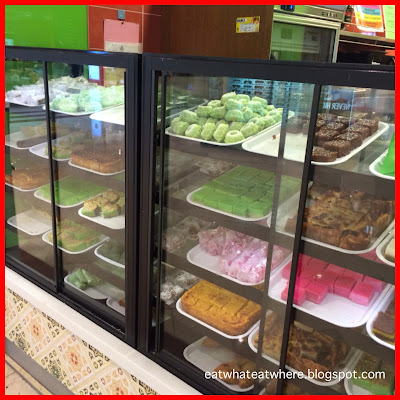 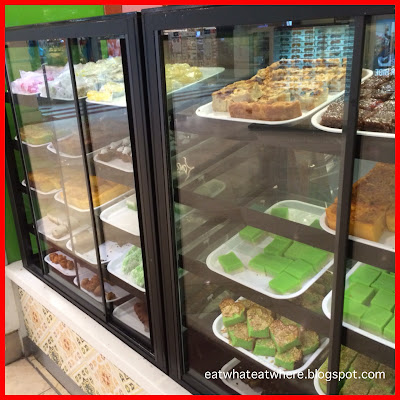 This place is self-service, so grab yourself a pair of tongs and a plate and just choose what kuih you want before proceeding to the cashier's counter.  You also order (and pay for) your drinks and hot food at the counter. 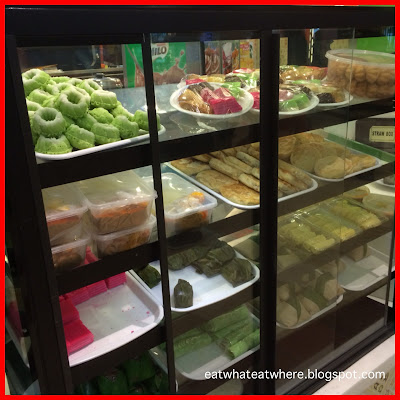 You can grab some breakfast staples like roti jala and roti boom with kari ayam, pulut kuning with ayam rendang or the (pre-packed) nasi lemak bungkus from the counter too. 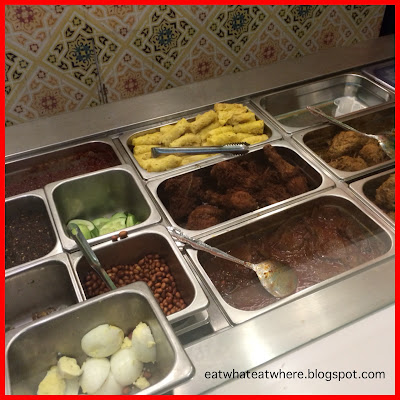 They also offer nasi lemak with various lauk and condiments, a perennial favourite of many for breakfast.  There are also different types of noodles on rotation basis...Soto Ayam (available every day), Laksa Johor (on Tuesdays & Fridays), Laksa Utara (Wednesdays, Saturdays & Sundays, Mee Kari (on Mondays & Thursdays) and Mee Rebus (on Wednesdays & Saturdays). 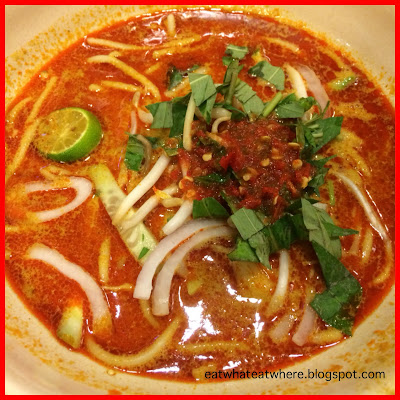 I managed to try the Laksa Johor @ RM12 which had a curry broth that was both savoury (with a fair dose of santan) and tangy which was refreshing to eat.  But some would find this bowl of noodles expensive since the ingredients are just vegetables (like what we'd get in our assam laksa), namely julienned onion, cucumber and bean sprouts, topped with a dollop of fresh sambal and a sprinkling (I think) of daun kesum (laksa leaves or Vietnamese coriander). 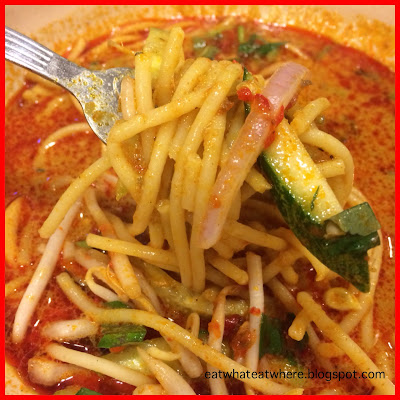 I thought laksa Johor resembles more of a thick assam laksa with a pale looking broth (from ikan kembong or fresh sardines) but this version looked (and tasted) more like a curry laksa.  Even though it may not seem like an authentic Laksa Johor, it tasted alright nevertheless.  I liked the nicely blanched spaghetti noodles with a squeeze of the "limau kasturi" (calamansi lime) over the curry broth. 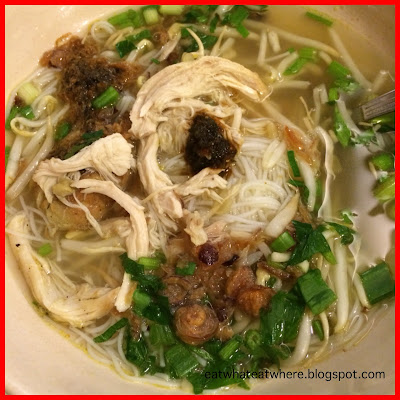 The Soto Ayam @ RM12 is a type of Malaysian chicken noodle soup with shredded chicken, begedil (potato patty), taugeh (bean sprouts), fried shallots and topped with a sprinkling of spring onions and daun sup (parsley).  It's served with a fiery sauce of bird's eye chillies blended with soy on the side....put as much or as little as you like as it's quite potent.  You can have this with either meehoon or "nasi himpit" (compressed rice cakes).  I did like the begedil but I've had better soto ayam before. 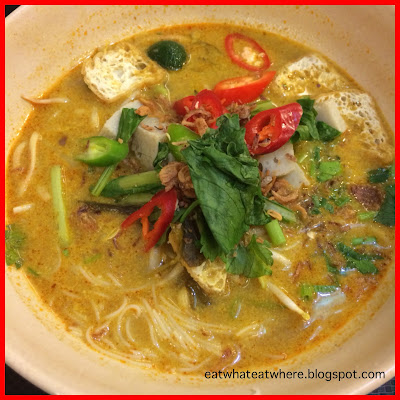 The Mee (or Meehoon) Kari (or Curry Mee) @ RM12 came with fish cakes, tofu puffs, "choy sum" (Chinese flowering cabbage), red and green chillies, taugeh and fried onions.  I was surprised to find the broth a pale yellow instead of the red-coloured curries I'm more accustomed to (and you'll also find laksa leaves in there instead of curry leaves).  I have to say that the Laksa Johor here looked more like a curry mee than the Mee Kari! >.< 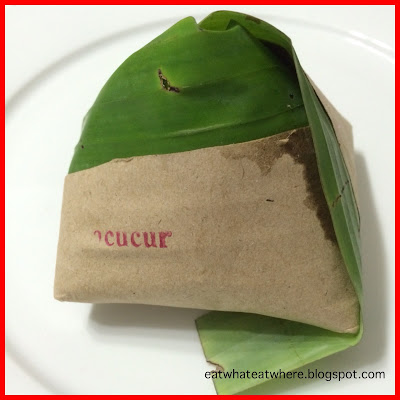 The Nasi Lemak Bungkus @ RM2.30 is your simple, every day pre-packed nasi lemak (as its name). 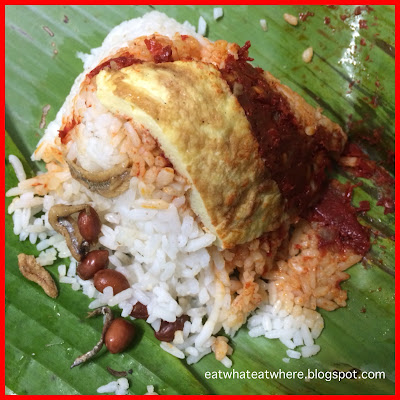 Filled with kacang (nuts), fried ikan bilis (dried anchovies), a slice of omelette and that ever important sambal.  I never get bored of eating this type of nasi lemak bungkus and this one was decent in its own right too. 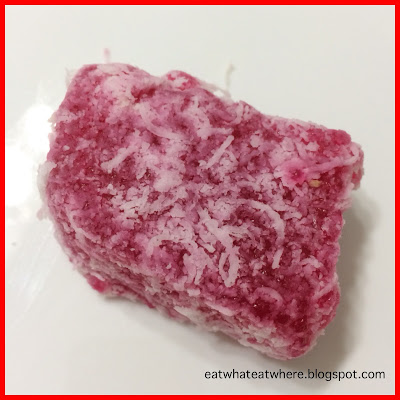 I've always enjoyed kuih sago coz I love anything with sago in it.  The Kuih Sago @ RM1.10/pc here wasn't too sweet and the rose flavour was evidently pronounced. 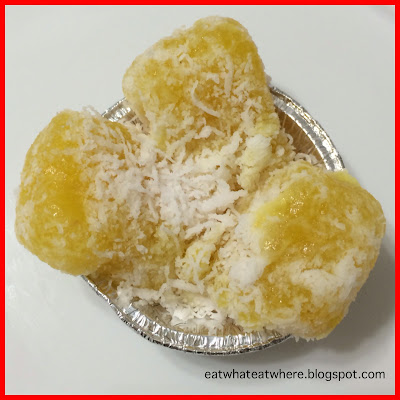 The Kuih Ubi Nenas (tapioca + pineapple) @ RM1.70 (for 3 pcs) is one I don't come across very often (as it's usually just kuih ubi kayu).  This, I loved, with its tangy and sweet flavours and, with just one bite, the flavours of the pineapple came out front and centre. 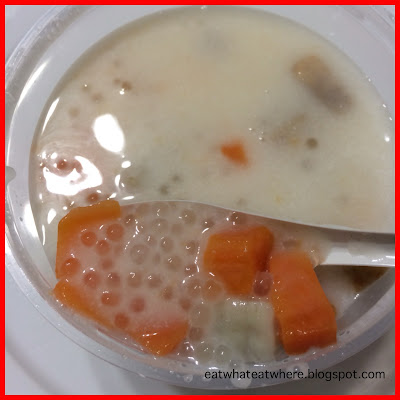 I could see that the tubs of Bubur Cha Cha @ RM5 had lots of sago in it and I knew I just had to get one to eat at home later.  But, it turned out to be a big disappointment, to say the least, as it wasn't just overly sweet.....it was insanely sweet!  In the end, I just fished out the soft yam and sweet potato cubes (and whatever sago I could)...and ate those and discarded the rest. 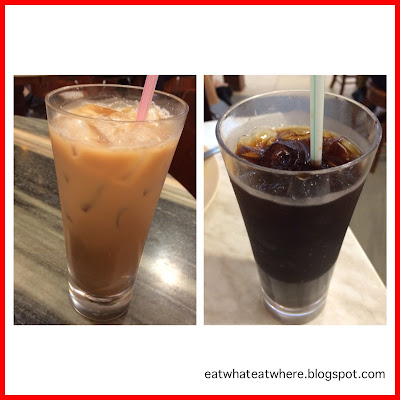 
It's obvious that this place is pretty popular seeing that they've lasted more than 15 years in KLCC and there's always a crowd during peak times.  Their noodles (averaging RM12 a bowl) with small portions and scant ingredients aren't really good value for that price but then this is KLCC we're talking about.


Their more than 40 types of traditional kuih is great, value-wise, as they're double the size of those offered by Nyonya Colors but, taste-wise, not as good as the latter.  I prefer the kuih from Nyonya Colors as I find them to be less sweet and more fragrant.

Give the noodles a miss and have a packet of nasi lemak and some kuih (the right ones) with a steaming hot cup of teh tarik....and you can still come away fairly satisfied with a fast and simple local breakfast here! ;)