Yut Kee @ Jalan Dang Wangi (established in 1928) is probably one of the oldest "kopitiams" around KL but has not lost its charm nor its customer base over the years. 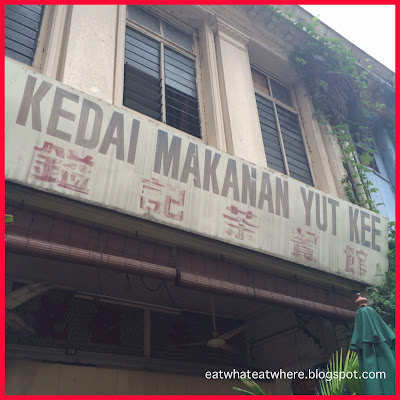 The place exudes an old-world rustic charm with its marble table tops, dark wooden chairs and old-school floor tiles.  You'll find lots of framed newspaper clippings on the reviews of the restaurant (and a few family portraits) from days gone by. 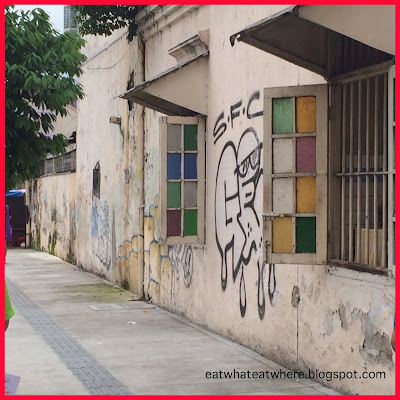 The dilapidated, graffiti laden side wall of the kopitiam and the worn out multi-coloured window panes, shows obvious signs of ageing of an old, colonial (pre-war) shophouse of yesteryear that has run its course.

I've been coming to Yut Kee for many years now and, with nostalgia creeping in, decided to visit them one last time before they move to their new premises (news of them moving have been circulating on the internet for quite a few years now...and now the time has finally come). 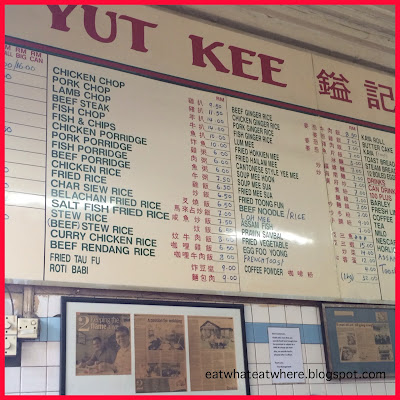 Yut Kee is always packed to the brim on weekends, so be prepared to wait for half an hour (at the least) if you want to eat here.  But what's different (and nicer) here is that all you need to do is to go to the counter and inform that you need a table for how many pax.  He will call your name once a table is available but you have to be prepared to share a table with others if you're in a small group.  With this system (at least), you won't have people staring down at you or 'breathing down your necks' while you eat. 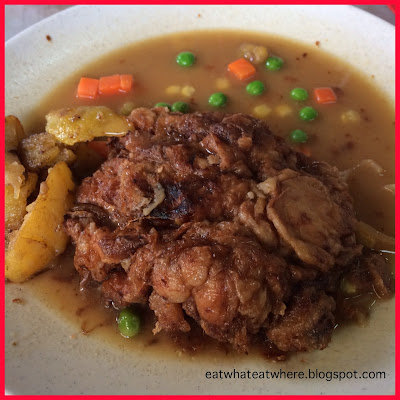 When you come to Yut Kee, you (of course) have to order the most famous item on their menu and that is their signature Hainanese Chicken Chop @ RM9.50.  What makes this chicken chop so good, you ask?  After all, it's just a piece of deboned chicken thigh, dipped in egg (as evidenced by the frizzy strands on the coating) and deep fried.  It comes with some (fried) potato wedges, (softened) onions and a mixture of (unfrozen) carrots/green peas/corn (that you can buy from any supermarket).
For me, the secret to a good chicken chop lies in its sauce and the one at Yut Kee is top-notch!  The not-too-thick, brownish Worchestershire-based gravy does not have the 'in your face' kind of punchy flavour but more of a mellow, subtle flavour which was truly delicious.  Sometimes, I would order a slice of toast bread to mop up the leftover sauce or I will just get a spoon to drink it up...it's that good! 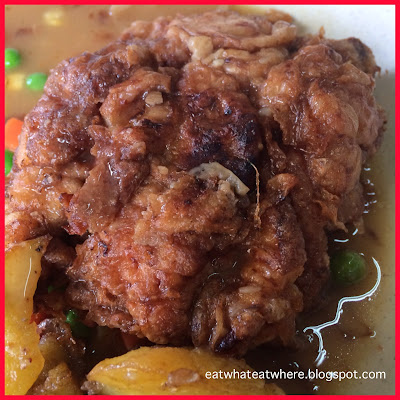 Visually, the presentation does not do the dish justice but flavour wise on the palate, it's remarkable!  It's not the prettiest plate as they just plonk the chicken chop on the plate and serve it to you at a 'break neck' pace so that they can get you out as fast as possible, I guess.  [Note: I can't think of a better (maybe not better but equally good) chicken chop out there other than the one I ate (a long time ago) at Sin Seng Nam Restaurant in Medan Pasar.  But then, they too served their last chicken chop on 28 February last year after an 85-year run.]
They also have Pork Chop @ RM11.50 (served with the same gravy) but it's no where near as tender or as juicy as the Chicken Chop.  Because the pork chop is tougher and chewier, I would suggest you give this a miss and stick with the chicken chop.  At times, the chops do come out a bit darker than I would have liked (but this is the price we have to pay for the drop in standard as they need to dish out the chops 'fast and furious' due to the relentless crowd). 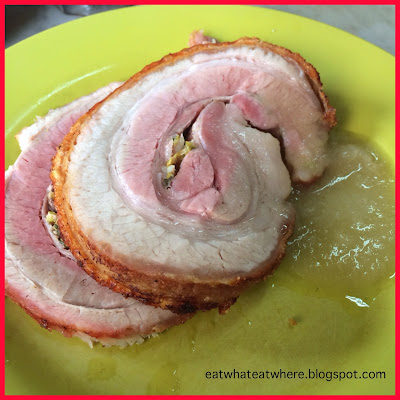 Another item that is very popular here is their Roast Pork @ RM15 (pretty pricey for 2 slices) and served with their inhouse apple sauce.  However, it's only available during the weekends and makes its 'grand' entrance at around 11am.  This is not the traditional Chinese roast pork ("siew yoke") that we're accustomed to but more of an English roast loin of pork with some stuffing of nuts (chestnut, pistachios?) and herbs (parsley, rosemary, sage maybe?). 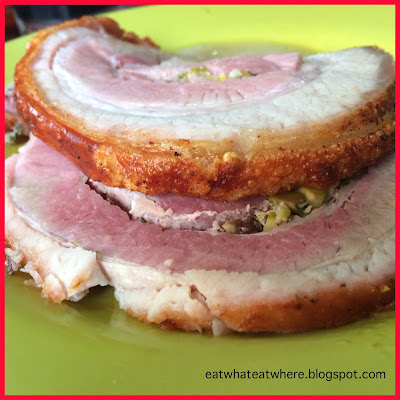 I didn't care for the tart apple sauce although I know that pork and apples are a classic combo in western cooking (and so is the stuffing).  I preferred to eat the roast pork on its own and found the meat really tender and not as salty as our Chinese 'counterpart' (the "siew yoke").  You know your pork is not overcooked (but cooked to perfection) when you see a slight tinge of pink in the centre. 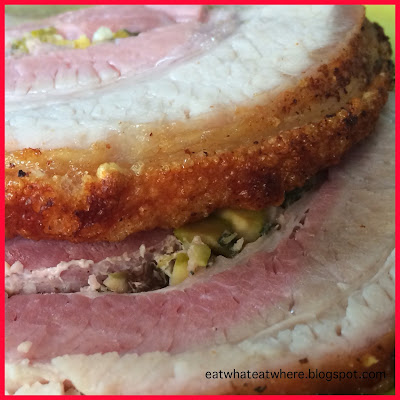 However, the best part of this roast pork is....wait for it......the crackling!  It's super crispy and so...so......good!!!  You know what's the secret to a perfect crackling...it's oil, salt and heat....and that's it!  And, at Yut Kee, these 3 were worked to perfection to create a super crunchy crackling. 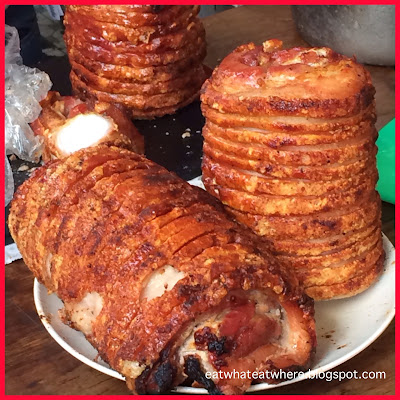 If you like their roast pork, you can buy a whole loin for RM160 or half a loin for RM85 (not cheap eh).  Are you drooling yet looking at these beautiful rolls of awesomeness? 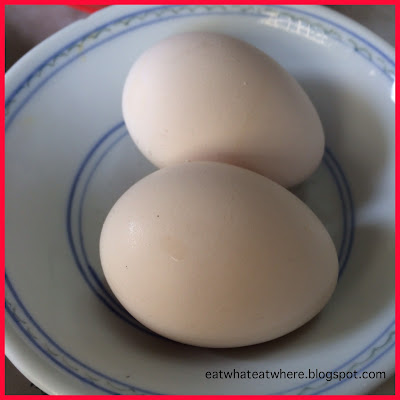 Another common favourite at Yut Kee is none other than their Half-Boiled Eggs @ RM2.80 and Toast Bread with Butter and Kaya @ RM2.80.  These free range eggs (or otherwise known as "kampung" eggs locally) were cooked perfectly and I couldn't wait to slurp down the runny, oozy goodness (oops, that's why there's a 'before' pic but no 'after' pic)! 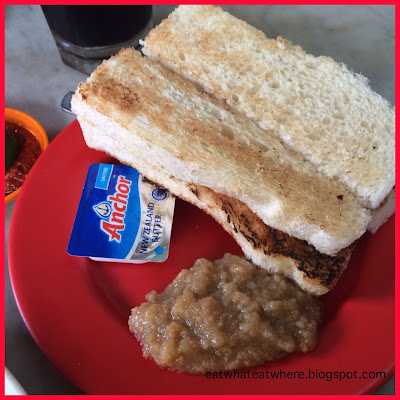 The toast bread, with butter and their homemade kaya, is a breakfast staple we all grew up eating on a regular basis.  As much as I like a simple toast, I was not particularly crazy for Yut Kee's homemade kaya.  Though it tasted alright, it was a bit lumpy for my liking (maybe that's how they wanted it to be) but I like my kaya smooth and silky (and not grainy).  Also, the bread tends to dry out if not consumed immediately.  Suffice to say, I've eaten better toast than this. 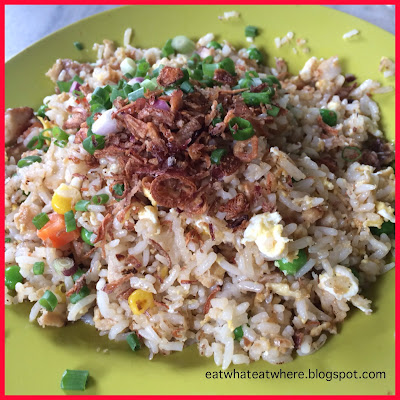 Apart from the above, Yut Kee also offers many rice and noodle dishes.  Their Fried Rice @ RM6.50 (or Salted Fish Fried Rice @ RM7.50) is not too bad.  The more popular noodle dishes are Hailam Mee and Fried Toong Fun.  Stay away from anything curry though.  Another firm favourite is their "Roti Babi" (Pork Bread) @ RM9 which I didn't like.  It's made up of minced pork, caramelised onions and "lap cheong" (Chinese sausage) wrapped in bread, dipped in egg and fried.  There were more (a lot more) onions than there were shredded pork. 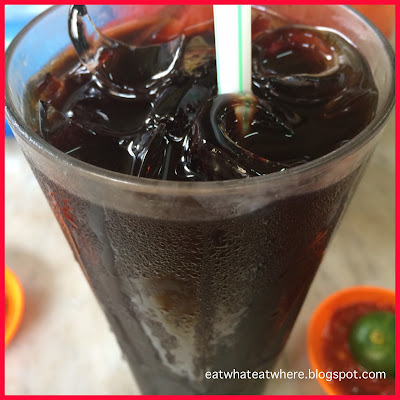 They also make a pretty decent glass of "Kopi-O Ping" (Iced Black Coffee) @ RM2.30 too.
Yut Kee makes the most amazing Marble/Butter Cake ever!!!  The marble cake not only taste fantastic but it smells incredible as well.  It's so buttery, moist and fragrant.  What makes this one of the best marble cakes is because they are not stingy with the butter (I must warn you though that it's rather oily because of the butter) but that's a good thing!  I usually buy a whole cake and take home but didn't get to this time as I was told the cakes will only roll out after 11.30am.

There's a reason why Yut Kee has consistently been on the Shortlist of Time Out KL Food Awards for Best Cheap Eats (2013), Best Malaysian Restaurant (2012), Best Chinese (2011) and Best Hawker/Mamak (2010 Winner) for the last 4 years because what they do well, they do really well.  Although they had to compromise on the standards a bit over the years because of the massive clientele, it is still good!
It's not a place to eat and linger...or sip and enjoy your Hainanese coffee (slowly) during the peak hours and on weekends.  It's...you order, you eat, you leave (quickly).
I'll see them (again) at their new location (and hope that they bring back the old architecture, charm and ambience)!

What I really liked:  The Hainanese Chicken Chop and Marble Cake!

What I really disliked:  The waiting time for a table, the sharing of tables (with strangers) and the kinda 'hurried mode' of your dining experience (as evidenced by the super fast clearing of your plates once you've finished eating).

Footnote:
After 86 long years of countless servings...it's the end of an era!  We (finally) bid farewell to their current premises (which we'll all miss) as Yut Kee is scheduled to move out in early June.  Their new site on Jalan Kamunting (the red building) is located directly behind their current premises.