Kanna Curry House @ Section 17 PJ was once voted the Best Banana Leaf Rice (in 2012), Best Indian Restaurant (in 2011) and shortlisted in the same category (in 2010) by Time Out KL Food Awards.  It was also the Top 5 Picks for Banana Leaf Rice of Flavours Magazine in its October 2012 issue. 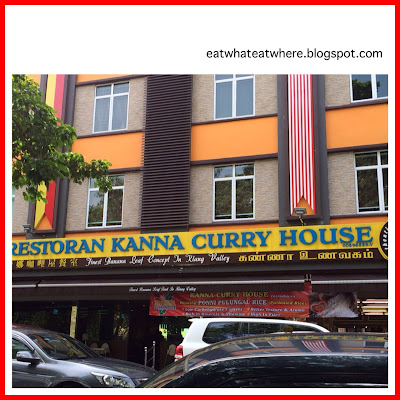 As with any Indian restaurant, they are well known for their banana leaf rice and various fried stuff from their frying stations.  I must admit that I am not a big fan of Indian curries and mushy vegetables but I do love their fried stuff, papadams and roti canai though. 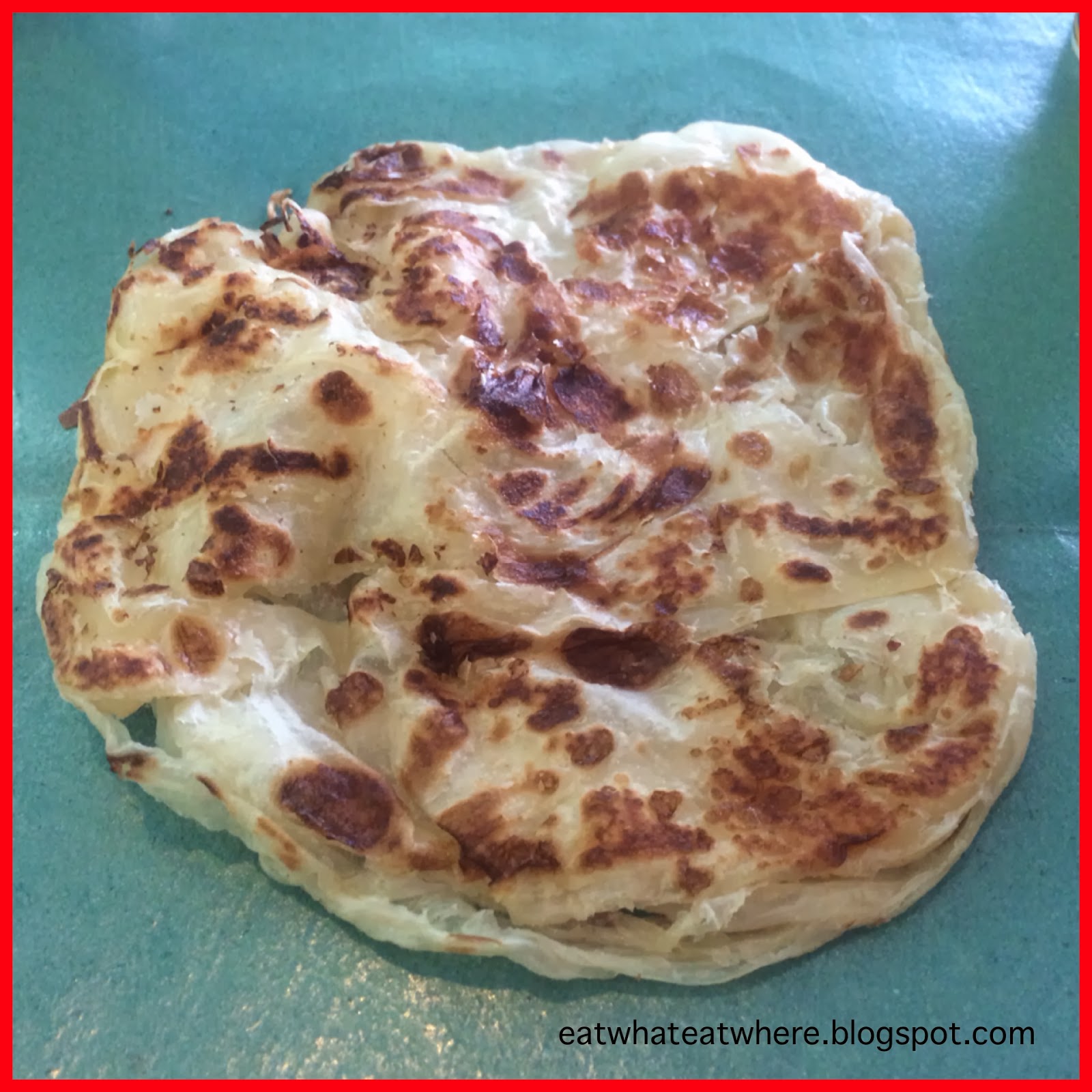 Though more popular for their banana leaf rice, I feel their "roti canai" (a type of Indian flatbread) deserves equal mention too as it is one of their best items here.  The roti canai @ RM1.30 is one of the softest and fluffiest I've come across.  And because it is so light and airy, consuming one is not going to be enough...you'll be tempted to order another...and another! 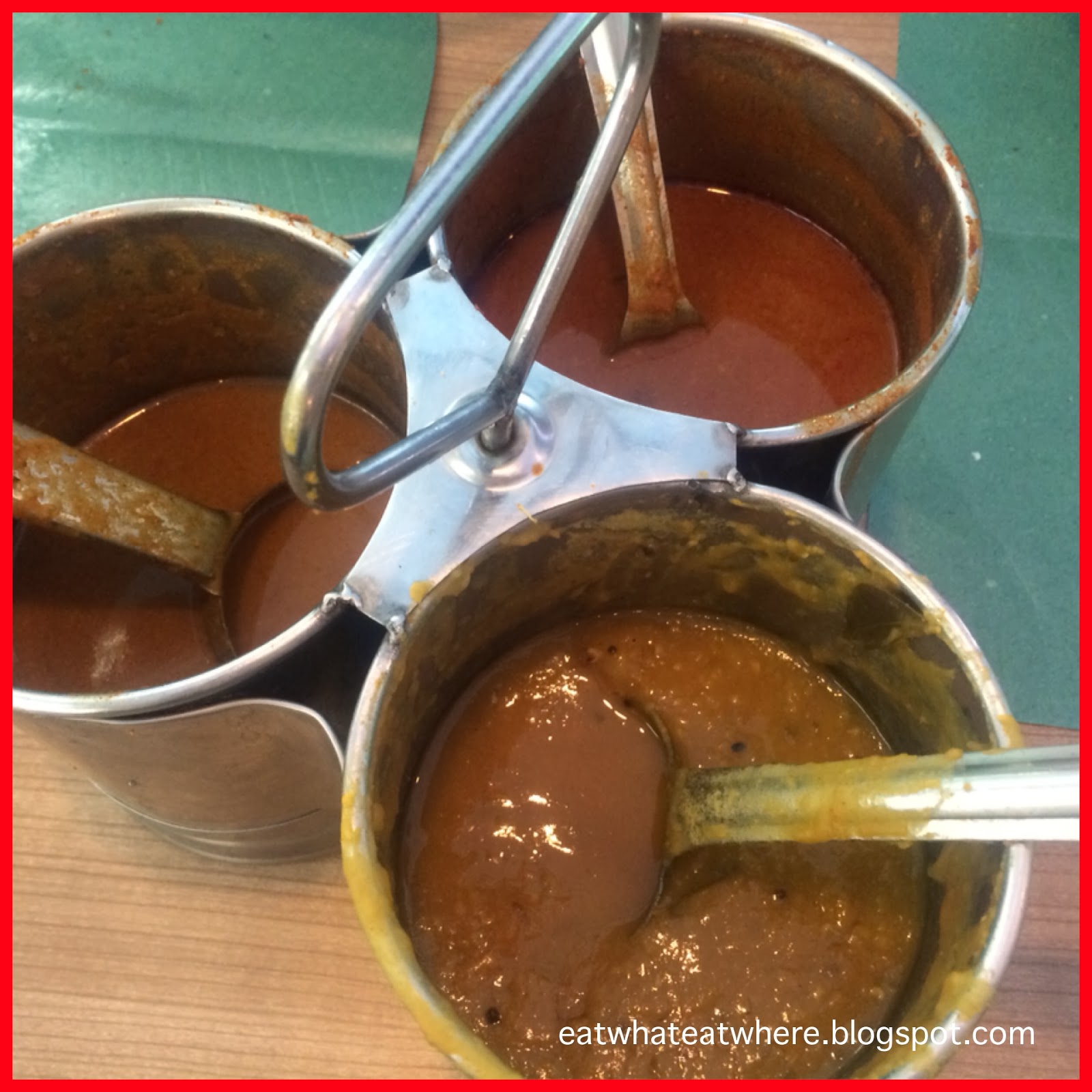 You eat your roti canai with any 1 of the 3 accompanying curries (or a mixture of all 3 if you like)...fish, chicken or dhal (a type of dried lentil which is regularly eaten with rice or roti by Indians).  All the 3 curries taste really good but my favourite is the dhal curry.

Though they make an awesome roti canai, the same cannot be said of their "roti telur" (roti with the addition of egg).  Somehow, it's just not as good as the plain roti canai (don't quite understand why as it's the same dough....strange)!
Of course, Indian curry houses are also popular for their fried stuff like "ayam goreng" (fried chicken), "ikan goreng" (fried fish), "sotong goreng" (fried squid), "telur ikan" (fish eggs), "burung puyuh goreng" (fried quail) and many more. 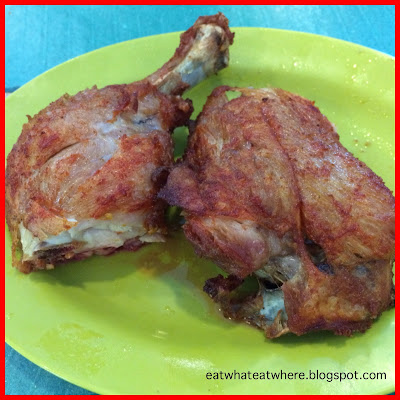 This is their Fried Chicken Leg @ RM5.80.  Their Indian-style Fried Chicken is just so different from the Chinese-style of fried chicken because theirs is marinated with lots of Indian herbs and spices which makes it so aromatic and flavoursome.  The chicken meat remains moist and tender while the skin is fragrant and crispy, but most important of all, the fried chicken has a nice golden colour (not too dark, like some places, where the oil could be overused). 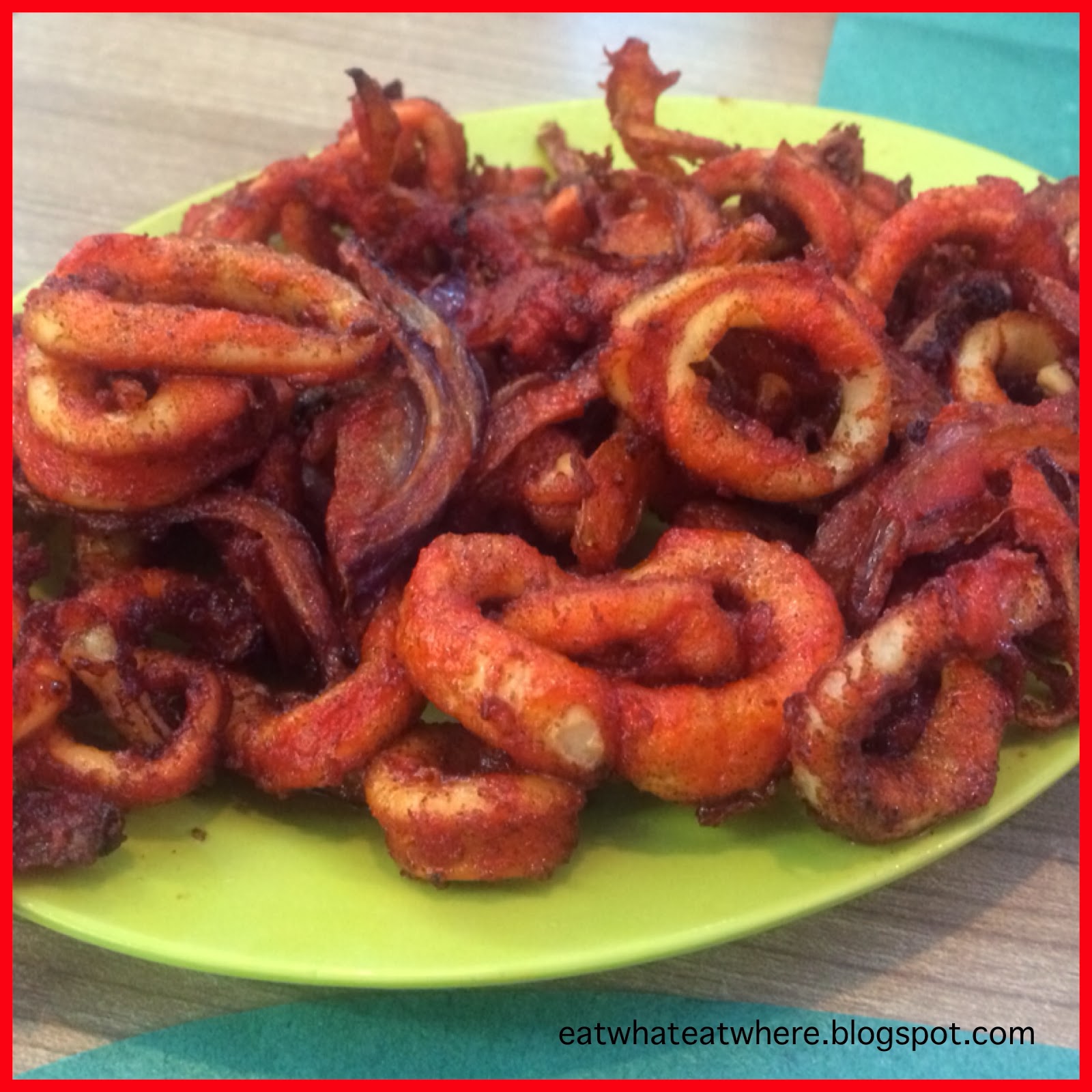 Here's a plate of their Fried Squid @ RM7.60 which is my son's favourite.  The squid is fried till crunchy, but not chewy, and the addition of caramelised onions adds a slight sweetness to the squid.  And, sometimes when they add curry leaves to it, it's even better. 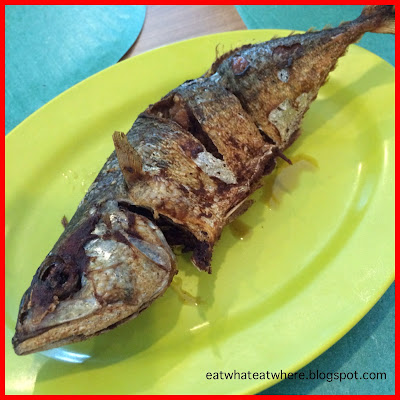 I usually like to order fried fish as well, either 'tenggiri' (Spanish mackerel) or 'kembong' (Indian mackerel).  This is the Fried Kembong @ RM6.50.  The fish was, however, over fried, though crispy, the fish meat was very dry which I didn't quite like.  The fried tenggiri, I had on an earlier visit, was better.

I've got to admit that one amazing find in this restaurant is their "vadai" (a savoury fritter-type snack from India).  There are 2 types of vadai that I know (but don't know their actual names), one is shaped like a doughnut (with a hole in the middle) while the other is circular and slightly flat.  The batter (made from flour and lentils) is mixed with sliced green chillies, onions, curry leaves and mustard seeds.  They are then shaped and deep-fried.  I prefer the one with the hole in the centre as it's softer compared to the disc-shaped one which has a harder, denser texture because whole lentils are used for the latter. 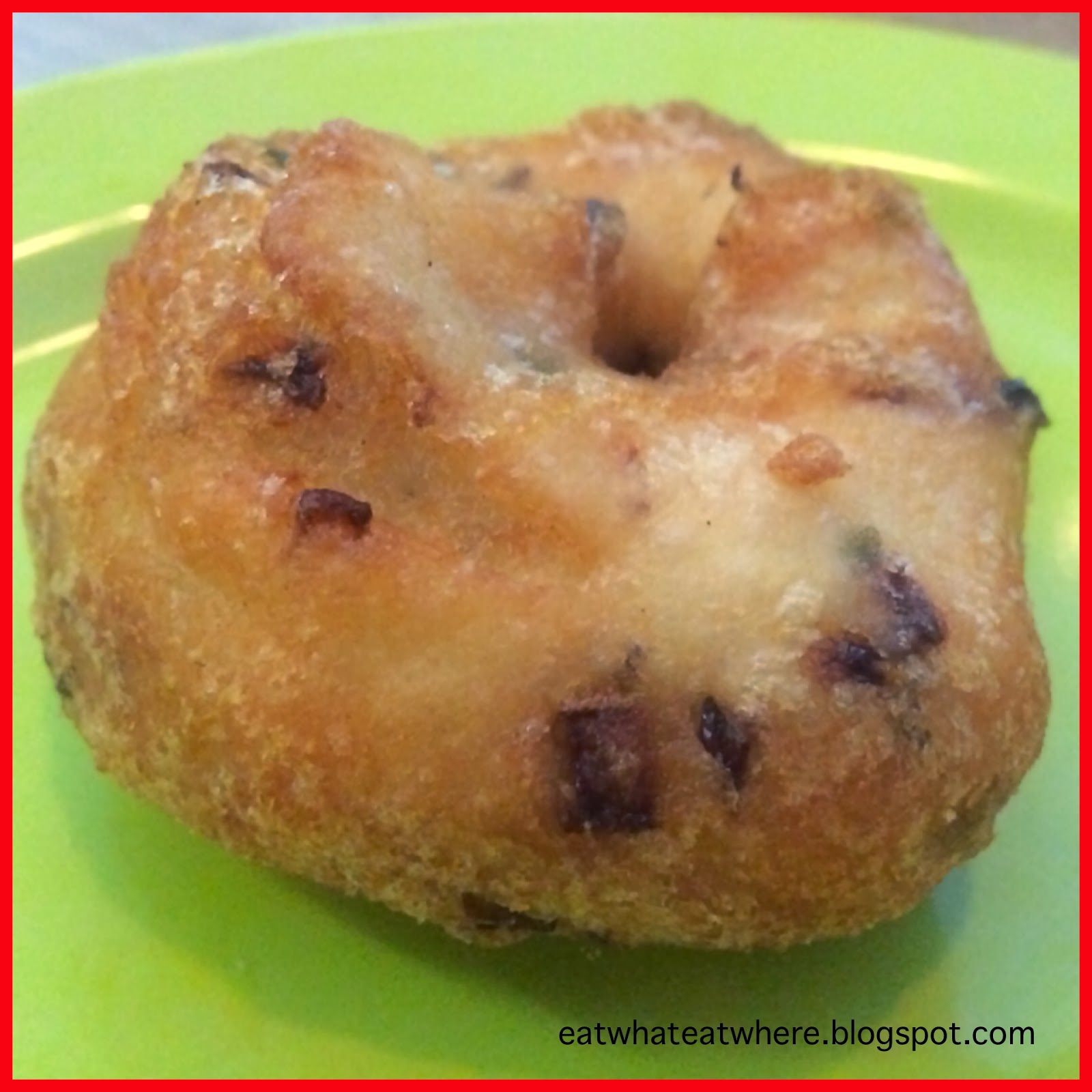 The vadai @ RM0.70/pc from this place is freshly fried, smells really aromatic (from all the herbs and spices) and is not too oily.  I've not eaten one that tastes so good and it is best eaten while still hot and crunchy.  I've only discovered this recently though I've eaten here numerous times...I guess it's better late than never! 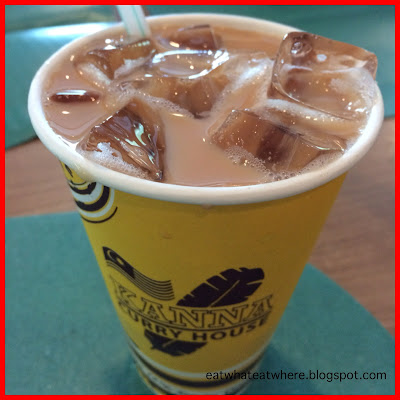 This place serves pretty decent Indian food though a bit on the expensive side.  Despite the owner's decision to serve food on fake banana leaves, and judging from the many customers who still come here for their signature dishes, is proof that they don't mind the use of fake banana leaves nor the higher prices one bit.

Dislikes:  The use of 'fake' banana leaves which takes away the nostalgia of a 'true' banana leaf experience!