I remember fondly my first visit with friends to Steaks & Lobsters @ Desa Sri Hartamas...and how my subsequent blog post on the wonderful dining experience ended up being featured on their website and facebook.  When I saw their anniversary special, I knew instantly that I wanted to return....but this time with family. 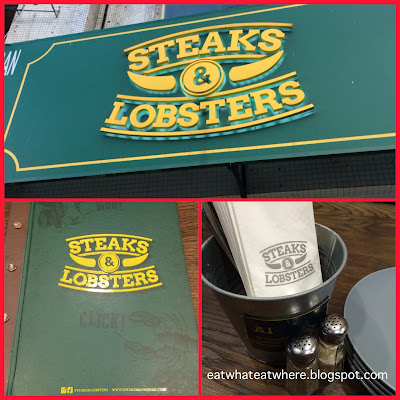 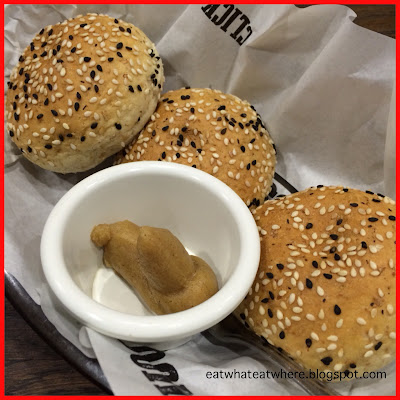 As usual, the first thing to arrive (after we've made our orders) is the complimentary bread with their house-made cinnamon butter...certainly welcoming and a nice touch :) 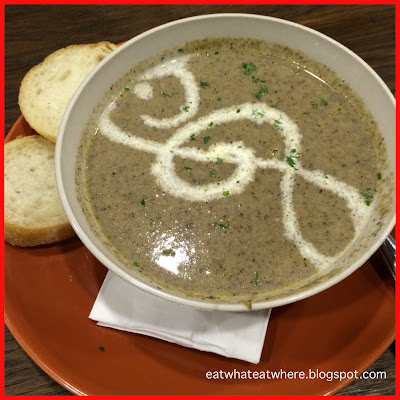 We started with a Wild Mushroom Soup @ RM14 made with a blend of portobello, shimeji, oyster and button mushrooms, served with a drizzle of cream and two slices of baguette.  With a good dose of mushroom flavour, a not overly thick consistency and the right balance of creaminess, this certainly was up there among some of the better mushroom soups I've had. 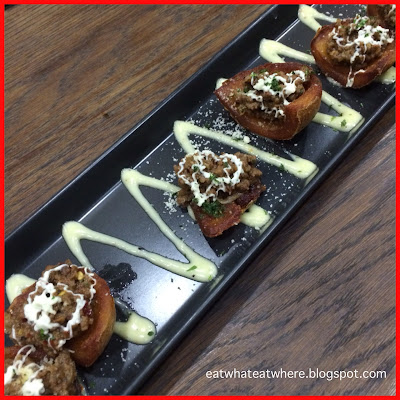 I went with the Chili Minced Steak Loaded Potato Skins (6 pcs) @ RM29 as our other appetiser for sharing. Made up of baked potato skins filled with their homemade minced steak chili con carne, topped with a sprinkle of parmesan cheese and a drizzle of garlic aioli at the bottom of the plate. 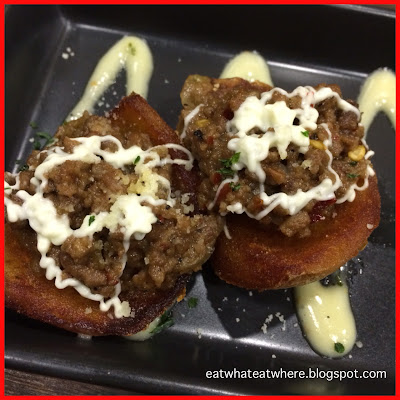 The homemade minced steak chili con carne was absolutely delicious on top of a piece of soft and fluffy potato with a nice crisp exterior. 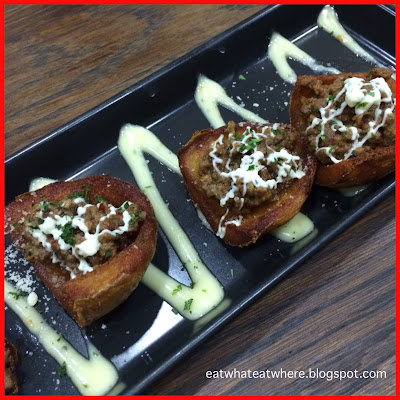 This happens to be my husband's favourite starter and it's a usual order for us when dining at steakhouses but their version here was by far the tastiest I've had the pleasure of eating.  The key factor was the top-notch and scrumptious (not to mention generous) minced beef topping that was unlike the ones we've had at other steakhouses. 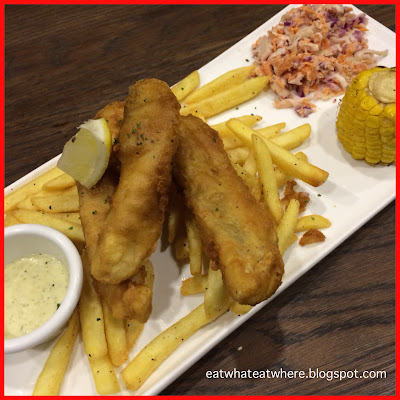 My son's main was the Barramundi Fish & Chips (300g) @ RM37 served with dill tartar sauce over a bed of french fries. 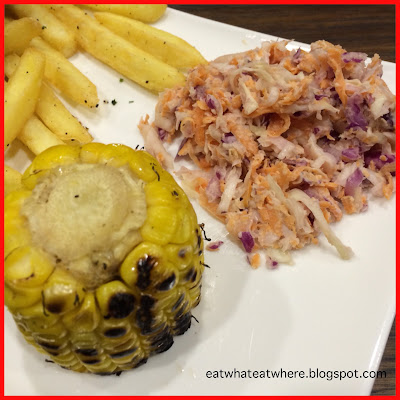 It also came with sides of coleslaw and grilled corn on the cob. 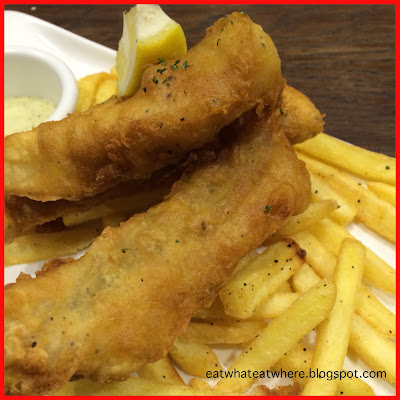 The soda-battered barramundi fish fillets of three fairly large pieces were fresh and deep-fried till crunchy perfection (which can be shared if you're a small-eater). 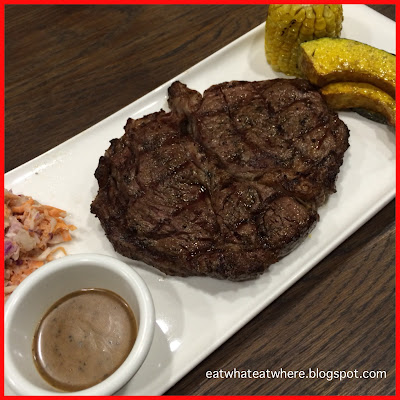 But the reason I came was specifically for this....their Wagyu Ribeye MB7 (300g) at a special promo price of RM150 (usual price RM198).  This 300g piece of meat is good enough to be shared by two not-too-big eaters (I shared this with my spouse). 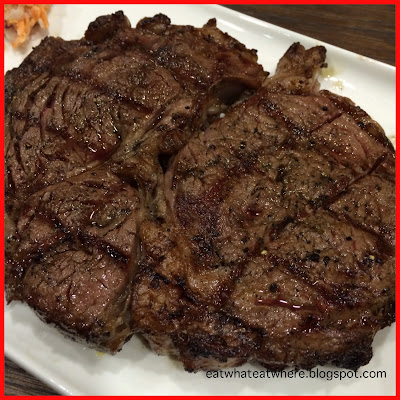 Just look (and drool) at this gorgeous hunk of meat...this kind of showstopper is enough to invite jealous looks from people seated at the tables near you when it's presented...hehe! ^o^ 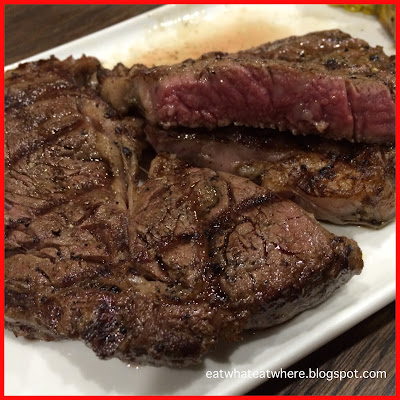 And it was perfectly executed to medium-rare as requested.  Seasoned to perfection, the meat had so much flavour and was tender and juicy without question.  This was way better than the Wagyu MB7 Round Sirloin I had previously.  The ribeye is a very good cut of steak for its marbling and bits of fat which flavour the meat beautifully and make it just that much more delicious to eat. 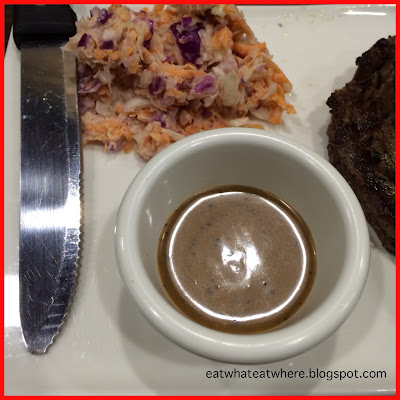 The steak was served with a very delectable black pepper sauce....although it didn't need the help of any sauce as it was glorious just on its own.  I prefer to eat my steaks without sauce to savour the true taste of the meat but I couldn't resist the sauce coz it was just da bomb.  We ended up asking for more sauce (and used our fries to mop up every last bit of it). 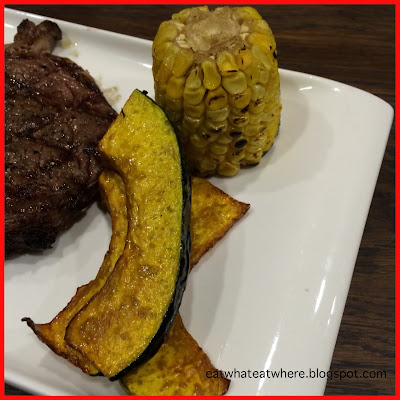 The steak was served with sides of coleslaw, grilled corn on the cob and fried pumpkin slices (slightly different to the ones I had previously).  All the sides are refillable, so you'll certainly be fully satiated...no going home hungry, for sure ;)  We had seconds of the coleslaw and fried pumpkin (and also ended up getting french fries instead of grilled corn).  My favourite side (the last time) was the avocado potato salad but (this time) it was the fried pumpkin.


For drinks, we went with some refreshing coolers: 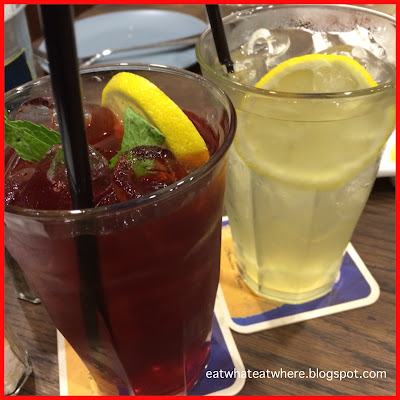 What was so drastically wrong that she had to return her steak?

There was this group of four seated next to us, two of whom ordered the promo ribeye and we couldn't help but overheard (as the tables were rather close to one another) that one of them complained to a server that the steak was too salty.  She said she specifically asked for less salt for her steak when she made her order. She must have a really, really low tolerance for salt, in which case, she should have just asked for her steak to be unsalted (to be fair).  These steaks already have so much natural flavour that I don't think the chef would need to put much in the first place.

Would you have returned the steak?

I don't think I could bring myself to do that as, first of all, it was an expensive piece of steak to return and the restaurant would surely make a total loss on it.  They would have to toss the entire steak as it's not salvageable since she has obviously taken a bite of it to know that it's too salty (for her).  Although some might argue she has an absolute right to return something that's not cooked to her request, I still wouldn't be able to bring myself to do it.  The only time I would is if the food (like pork or chicken) was undercooked and eating it would be hazardous to my health.  I've never returned food that was not seasoned properly or steaks cooked beyond the doneness requested (as it's always a very fine line between the degree of doneness, so one should be more understanding, I suppose).

Since any restaurant would strive to provide the best customer service, the server had no choice but to take the steak back and fire up a new one for her.  It was then that I overhead the server reconfirming her steak doneness as "medium well" O_o...yikes, what a waste of good money and a good piece of steak! ;D

Steaks & Lobsters is now a new favourite place of mine for (mainly) steaks and (the occasional) lobsters.  A must-try is their Wagyu Ribeye...and it's still not too late (you have until this weekend) to try it out at their promo price! ^_*

It may be expensive but it's so worth it (even at its normal price of RM198) because of the taste.  The steak should be good enough to be shared by two if you're ordering starters.  But if you want a less costly cut, they do have steaks at more affordable prices (RM49 - RM88) or other mains under RM40.

There are lots more on the menu to try and I can certainly see myself returning in the months ahead.  Perhaps, you too may want to give this casual steakhouse, with warm and friendly service, a try the next time you have an occasion to celebrate.