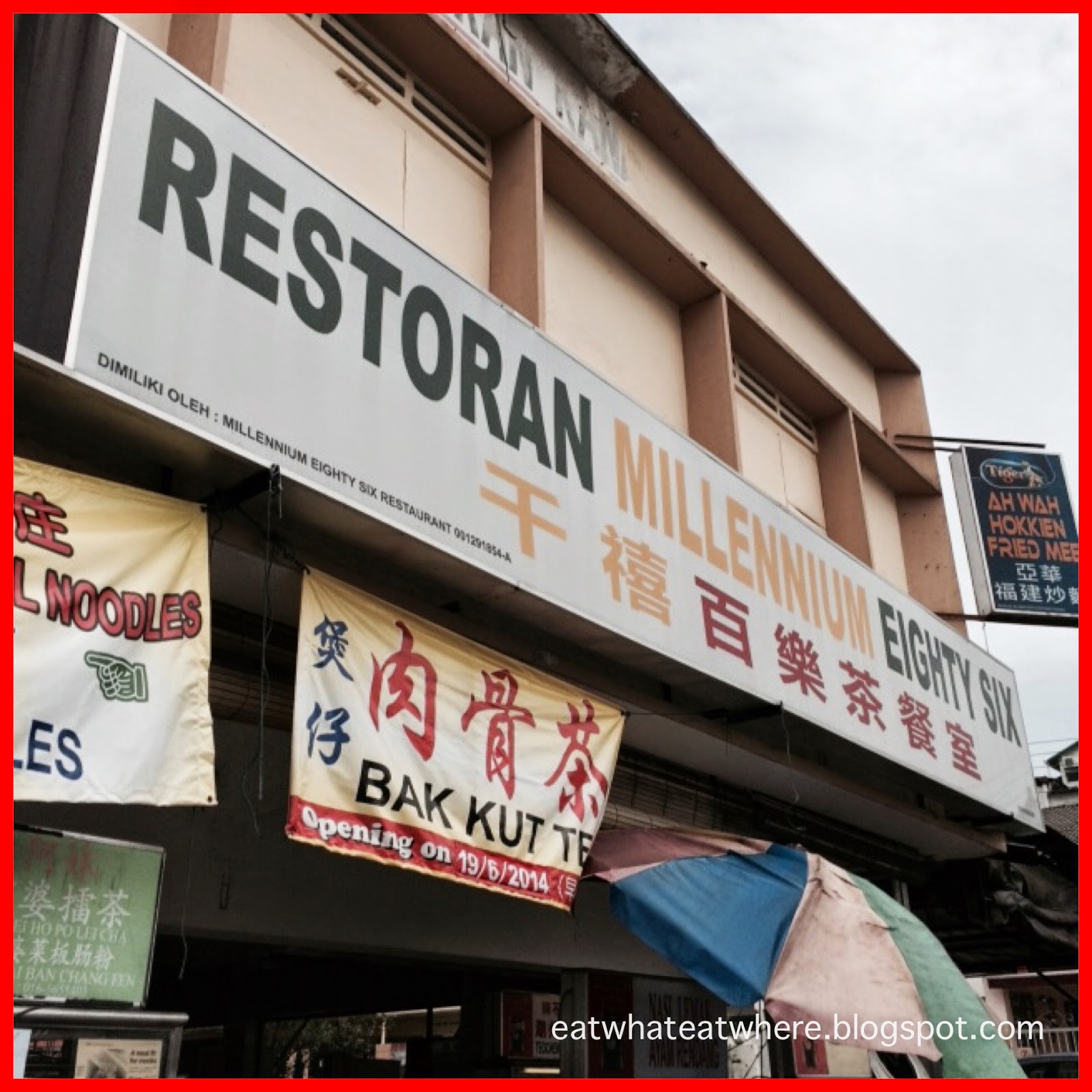 The previous times I was here, I had the opportunity to try the fish head noodles, steamed fish with rice wine and fried pan mee from a stall located towards the back of the restaurant.  They were all good. 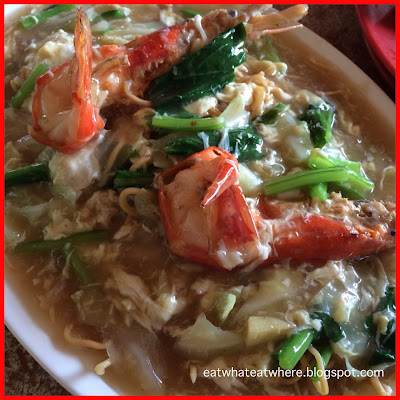 This time I decided to try their sang har meen (freshwater prawn noodles) but, knowing how expensive this dish can be, I did the smart thing and enquired about the price first.  Sang har meen these days can go for anything from RM70 - RM100 for a 2-pax portion.  I was pleasantly surprised when I found out the price and so I ordered the Sang Har Meen @ RM20 for a 1-pax portion. 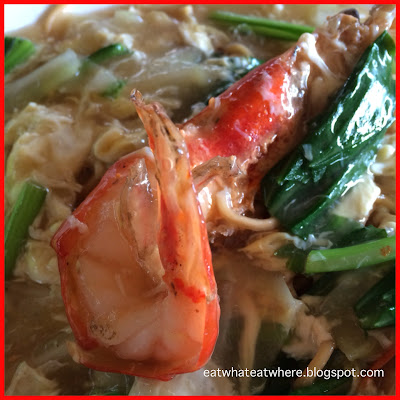 Looking at the price they charged, I knew that I shouldn't be expecting a huge freshwater prawn and what came was a medium-sized one.  Even though this was a one person portion, it's still substantial enough for sharing (which I did with my mother-in-law). 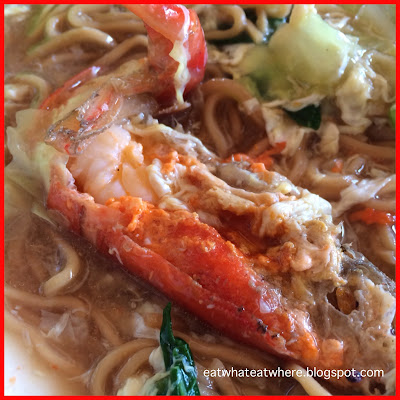 Since it was only a medium-sized prawn, there was only a bit of roe in the prawn head but not quite enough to coat the noodles as those I've eaten in the past.  However, the noodles still tasted alright due to the distinct flavour of rice wine in the yee mee (a type of egg noodle that has been deep fried). 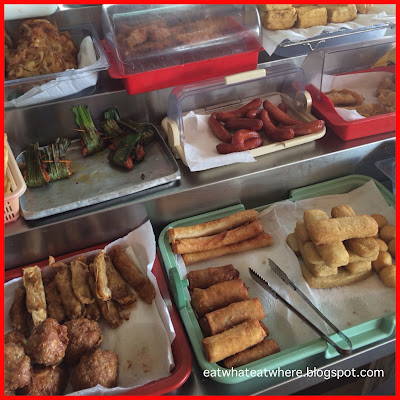 Besides this noodle stall, my other favourite is the Penang Lor Bak stall manned by a nice old lady. 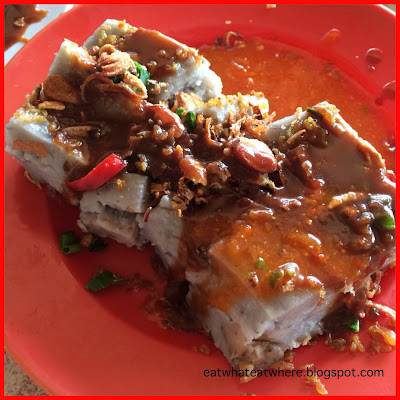 I had to have the old lady's Yam Cake @ RM3 (for 2 pcs) again when I realised how awesome it was when I "tapau" (packed) it the last time.  You'll know (at once) that this is a kick-ass yam cake just from the colour...full of yam flavour and topped with bits of fragrant dried prawns, fried shallots, chopped spring onions and fresh chillies. 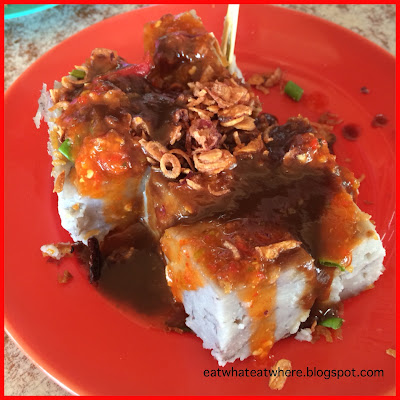 This is still the best yam cake I've had so far (and my spouse, who was having it for the first time, thought so too).  He liked it so much that we returned (two weeks later) and had it again.  When you order, she'll proudly tell you that this is the third (or fourth) tray that she has sold today...that's how proud she is of her yam cake (and her chilli dip too)! 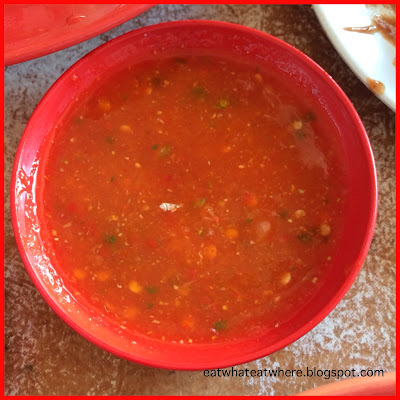 And what was even better than the yam cake was her own-made chilli dip that's absolutely fresh and tangy in flavour...definitely one of my favourite chilli dips of all time.  The last time I wrote about this chilli dip, I mentioned that there could be some orange juice in the mix because of its citrus flavour.  So, out of curiosity, I asked the old lady (she's 82 by the way) if she added any orange juice into her chilli mix....and she said no, only the juice of the just-ripe calamansi limes and a bit of the zest.  Well, that's one helluva good chilli dip, I tell ya! ;D 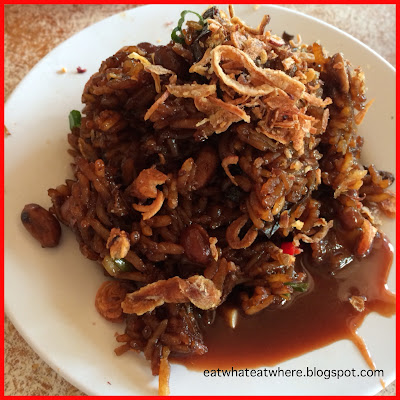 This time I also spotted some glutinous rice at her stall.  I ordered one portion of Glutinous Rice @ RM2 filled with dried prawns, mushrooms, peanuts and fried shallots. 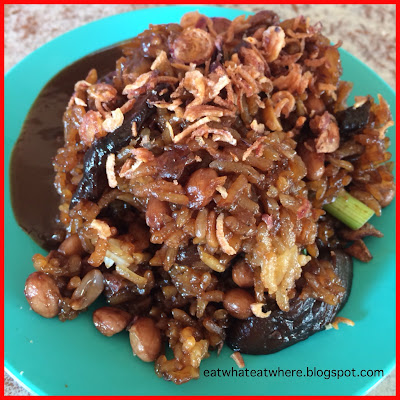 This version is not as sticky as some I've had before.  It had nicely separated grains but still soft enough...very satisfying indeed.  We ordered this again the next time we were here. 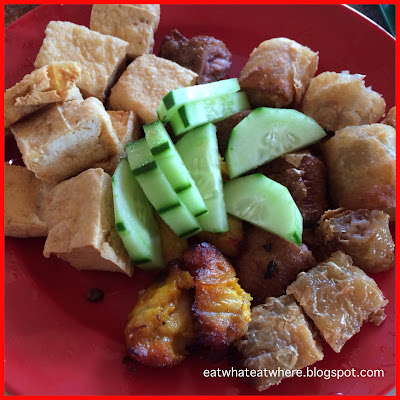 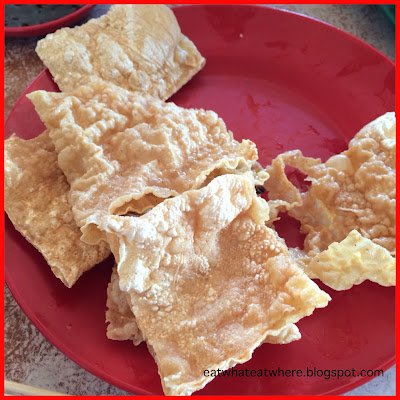 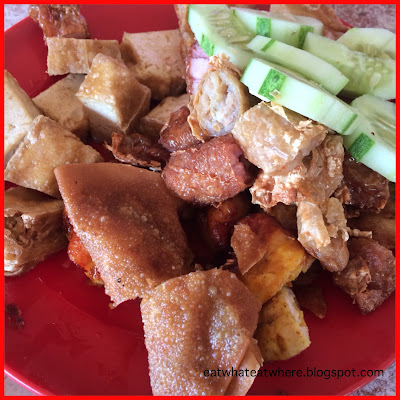 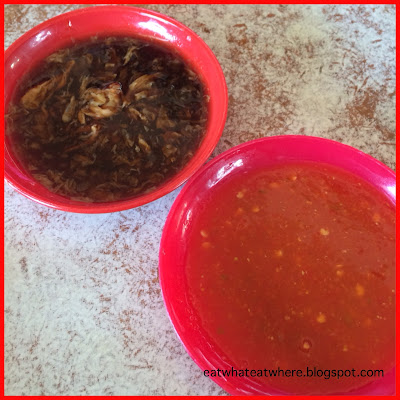 ....and served with the eggy sauce and the same stunning chilli dip. 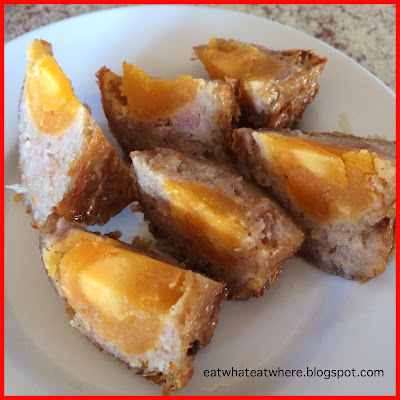 I also noticed a big, rounded lor bak item and was told that it resembles a mooncake but it's actually salted egg wrapped in yam @ RM3/pc.  Curious, we ordered it and it came cut into pieces and really did look like a mooncake.  We liked this a lot. 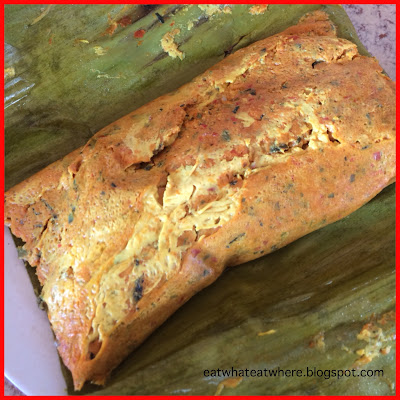 This round, we also got to try the Penang Otak-Otak @ RM5 and this had a mixture of eggs, fish chunks, coconut milk and a whole lot of spices and herbs with a strong hint of lemongrass and kaffir lime leaves. 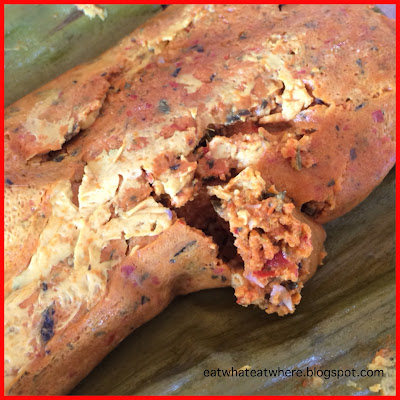 This version is not those thin rectangular ones you'd find grilled over an open fire (which I'm more accustomed to) but a Penang-style version which is more like a spicy fish custard parcel and steamed instead.  It was really, really good! 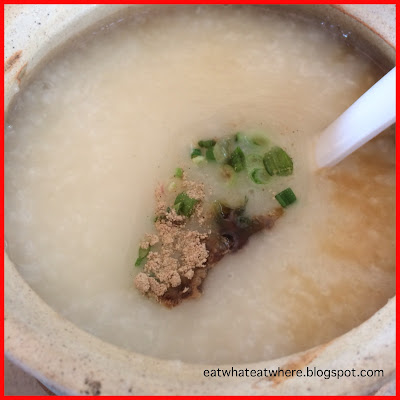 There was also a stalling selling all kinds of porridge and when I saw that they offered Frog Porridge @ RM8, I couldn't resist ordering one.  It came in a claypot and there was quite a lot of porridge. 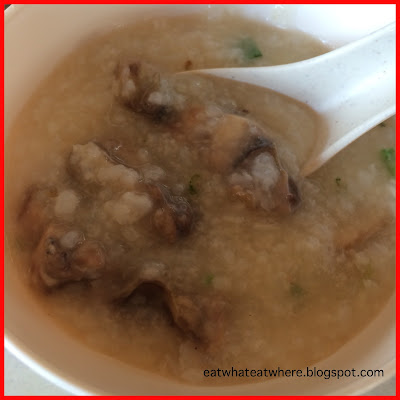 But it had very few, teeny-weeny pieces of frog....it was cut so tiny (the frog must have been really tiny), I couldn't even make out the parts of the frog.  I scooped out all of it into just this one bowl of porridge (which I consumed) and left probably another two bowls of porridge in the claypot coz it was practically tasteless with so little frog.  I guess I shouldn't have expected to see fat and juicy frog legs looking at the price.

#Side Story
The sweet old lady manning the Penang Lor Bak stall is quite chatty when you engage her in conversation.  She'd even tell you about her history and her family.  It's rather sad to see her still working at this age but she wouldn't have it any other way.  She said she did retire some years back but found it difficult idling her time away and reopened her stall at the urging of her customers. 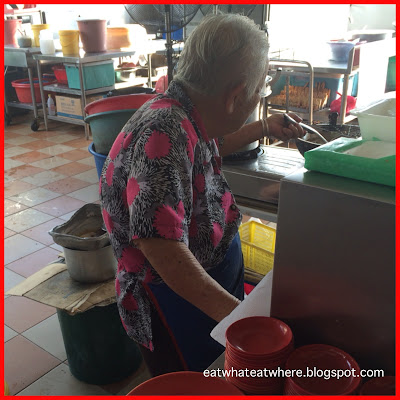 If you happen to patronise her stall, you can always help her out a bit by serving yourselves (as in carrying your food to your table) as she's hard of walking (but still able to run morning and lunch service, leaves around 3+pm and returns again for dinner service as what she told me and I certainly take my hat off to her...for her hard work and dedication).  I secretly snapped a photo of her when she wasn't looking...hehe!


Two stalls you shouldn't miss while you're here is the Penang Lor Bak stall manned by the sweet old lady and the noodles stall at the back.

There could be other good eats at the other stalls but I couldn't be bothered really coz, each time I'm here, I just head straight for these two! :D  And now that we've found this great yam cake, we'll certainly be back more often as the old lady isn't getting any younger.  And you should too...before the chance slips by!