As I needed to visit Great Eastern Mall to replenish the stock of 'salmon sashimi' for my four-legged friend and since I've eaten at quite a few places here already on previous visits, Kiku Zakura @ Great Eastern Mall was my choice this time. 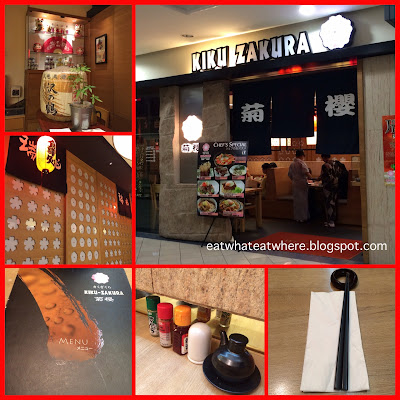 This restaurant has been around since 1996 (according to their Facebook Page) with another outlet at Tropicana City Mall and an upcoming one in Mid Valley (scheduled to open in April 2015).  [#Note: If you google this restaurant, you'd realise that they used to have branches in Berjaya Times Square, Avenue K, IOI Mall and Mid Valley (they seem to be opening and closing...why?...I've no idea).] 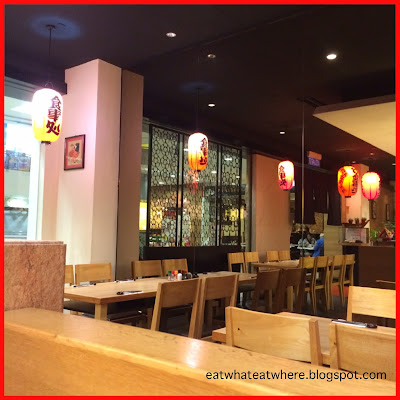 The décor and the kimono-clad waitresses (and Japanese songs playing in the background) did give this eatery a more Japanese-feel.  Service was a little bit 'extra' too when they pamper you with hot towels before and after your meal....how's that for service! 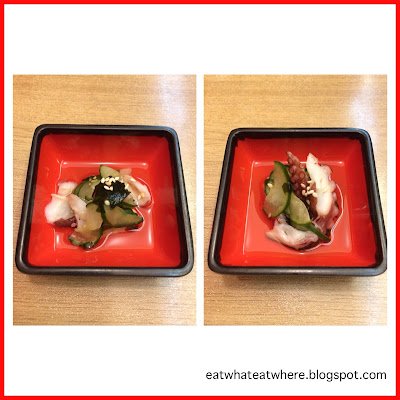 After we've made our orders, we were served a complimentary appetiser...I wouldn't call it an appetiser.....more like a 'teaser' coz it's so tiny!!  Anyway, let's not sound ungrateful...it's vinagered octopus with cucumber...quite well done and addictive :) 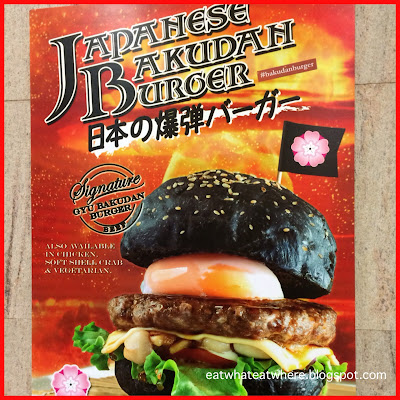 Actually, I don't know much about this place other than the fact that I've seen the release (on their Facebook in Sept 2014) of their Japanese Bakudan Burger with a choice of gyu (beef), tori (chicken), kani (soft shell crab) or yasai (vegetarian). 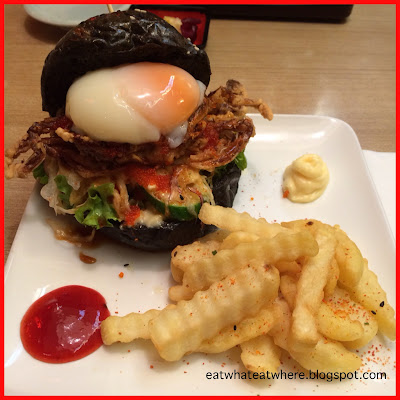 So, our first order of the day was....you guessed it...the Kani Bakudan Burger @ RM33 which is a soft shell crab burger with a choice of charcoal bun. 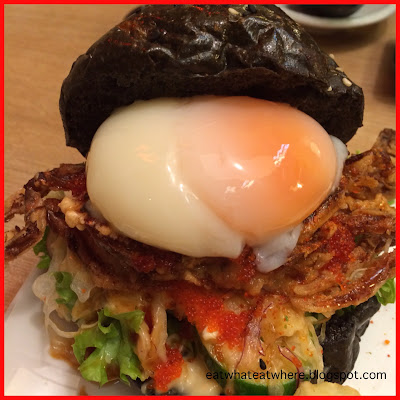 The soft shell crab's size was slightly bigger than the bun...yay!  What's not to like...it was fresh, crispy and oh-so-good! 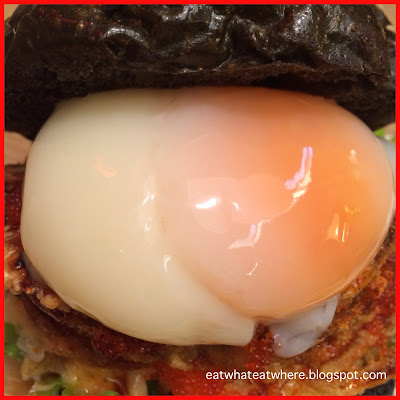 The soft shell crab burger was served with an Onsen Tamago.  [#Note: An Onsen Tamago is a Japanese low temperature egg (tamago) traditionally slow cooked in its shell in the water (70C) of hot springs (onsen) in Japan...of course, it's now cooked in a temperature controlled water bath.  I guess it's similar to the western's version of a 63-degree or 75-degree egg.] 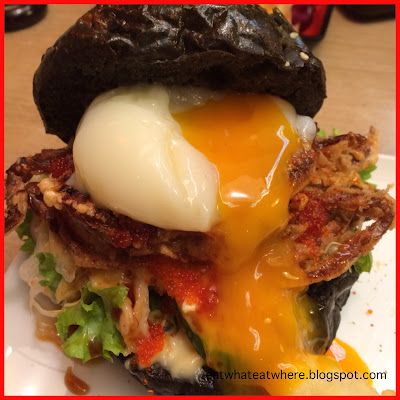 The soft pillowy texture of the charcoal bun was perfect for soaking up the creamy, oozy egg yolk that was running off.  Imagine sinking your teeth into something that breaks and oozes down your mouth...it's bonkers!  It was a mess alright....but it's better to have enjoyed and made a mess than never to have enjoyed at all :D 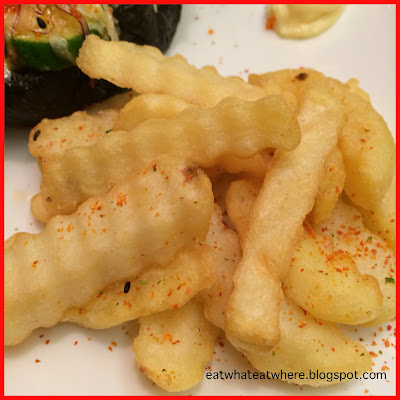 There was also a side of fries (which was forgettable) and some crunchy vegetables of shredded cabbage, sliced Japanese cucumbers, lettuce leaves, some fish roe and Japanese mayo in the burger. 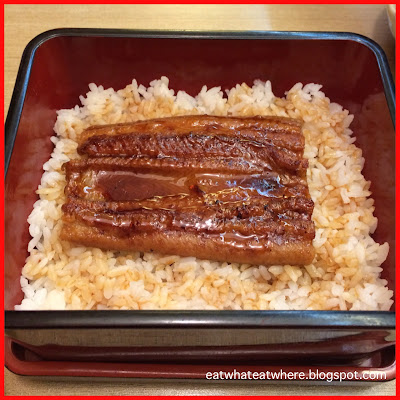 Our next order was the Unaju @ RM33.  At first, I didn't know what Unaju was (although I suspected it was unagi) until I was told it's unagi with rice...oh, I thought that was called Unadon.  [#Tip: So, on my return, I googled it and this is what I got.  Unadon is an abbreviation for unagi + donburi or "eel bowl" and unaju is the same dish served in a lacquered box.  Ah, so...unadon is an eel bowl and unaju is an eel box...kekeke!!  If your unaju happens to be pricier than your unadon, it's because of the appearance of luxury of the box, that's all.] 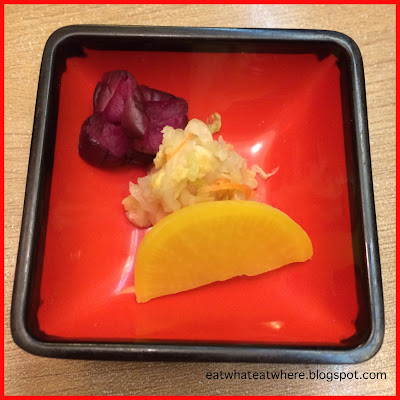 It was served with a tiny plate of pickled cabbage, radish and some kind of cherry (I think, I can't quite remember). 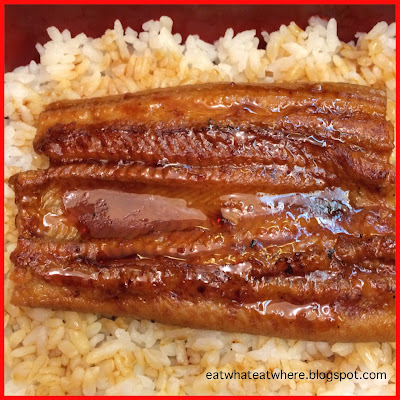 Both the unagi and the sauce (for the rice) met with approval. 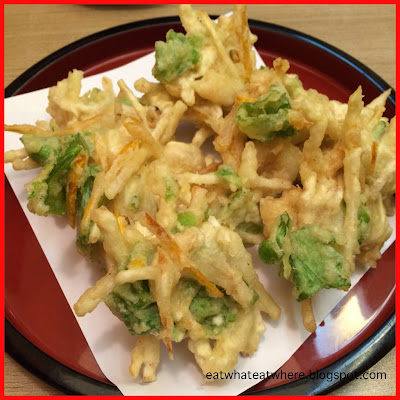 We also ordered an Ebi Mitsuba Tempura @ RM18 which is a prawn and vegetable tempura which was totally disappointing!  You'd have to go on a 'treasure hunt' to find the prawns :( 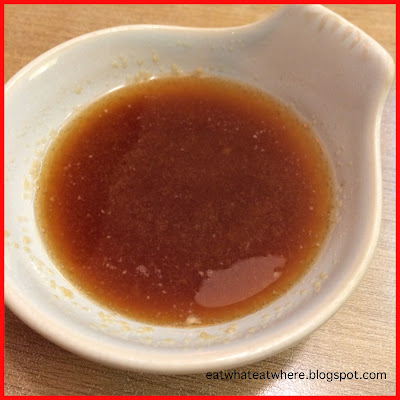 It comes with the usual dipping sauce for the tempura. 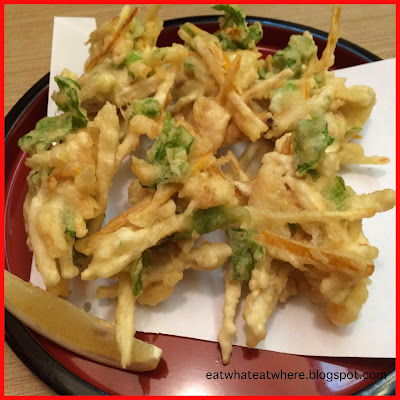 You can also see that the tempura batter was thick, thus not giving it the light and super crispy texture that I'm used to eating.  If I had to put it down to the worse tempura I've eaten thus far, this has got to be it! T_T

Our drinks for the evening: 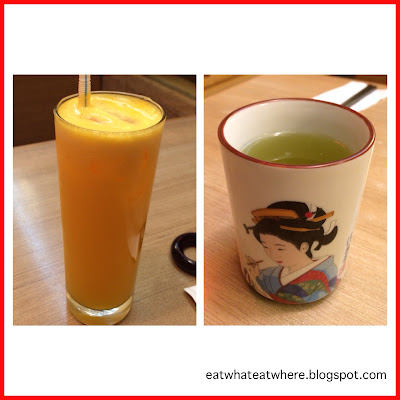 A must-try is probably their Japanese Bakudan Burgers.  I'd say the food is fair (as long as you don't order any tempura) and reasonably priced too.  I did like the soft shell crab burger and unagi.

I think they're are quite well known for their fresh sashimi but I wouldn't know as I didn't have any.