Since discovering the beauty of using a freshly made chilli paste (and how easy it was to make it from scratch), I've begun to experiment (and use) it incessantly in my cooking.  Now, why didn't I discover this sooner? ;) 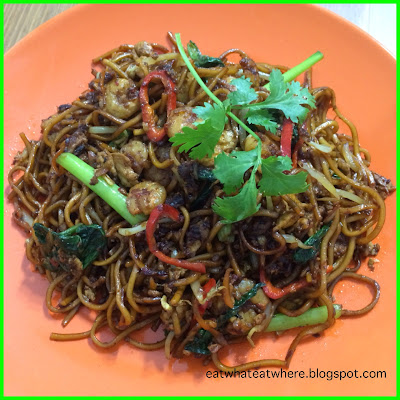 It adds so much freshness and taste to any dish.  It's especially good in fried rice and fried noodles.  I've since used it to great success in a home-cooked version of Mamak Mee Goreng which, before this, I thought I could only order at mamak restaurants. 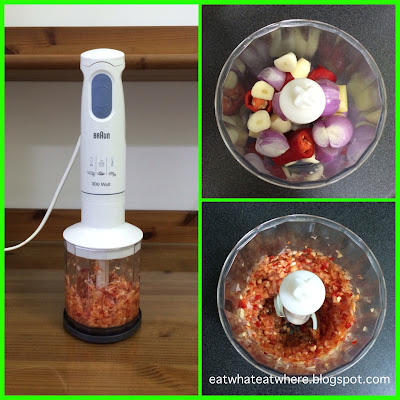 You start by pounding or blending an easy-to-make fresh chilli paste...the same one I first made to cook my Shrimp Fried Rice.  The paste is made with 2 red chillies (or substitute with 8 bird's eye chillies for more heat), 4 cloves of garlic, 6 shallots and a knob of ginger (about an inch).  And the best thing is, you don't even need a recipe for the chilli paste, the amount of each ingredient can be varied and it won't really affect the taste too much.  If you like more garlic, put in more, if you like more shallots, use more and if you like more heat, add in more chillies...anything goes! ;) 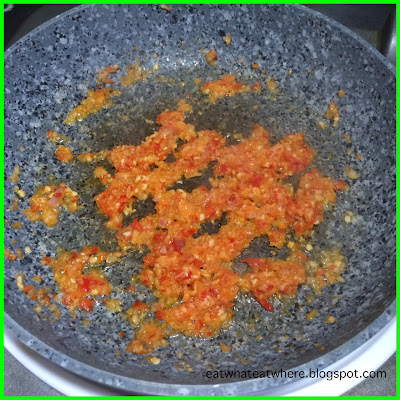 Actually, I've never ever fried any kind of noodles at home before (until I started to made my own fresh chilli paste) as I thought it wouldn't be any good fried with just soy sauce.  Fry half of the chilli paste (about 3 heaped tbsp) in 2 tbsp of oil for about 1 - 2 minutes until aromatic (use more chilli paste if you like a more robust flavour). 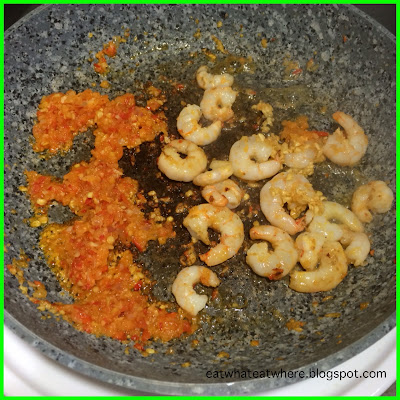 Push the chilli paste to one side of the pan, drizzle in another 1/2 tbsp of oil and add the shrimps with a little bit more garlic. 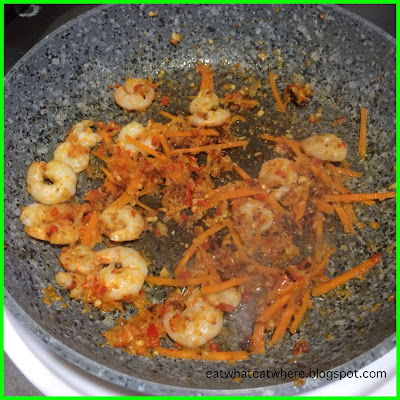 Next, add the finely shredded carrot (first) and fry till the carrot has soften.  This has always been my bone for contention when eating mee goreng at mamak stalls (or any dish with carrots at Malay or Thai stalls) coz they're usually hard and I've always hated that...and that's because they like to add in all the vegetables at the same time. 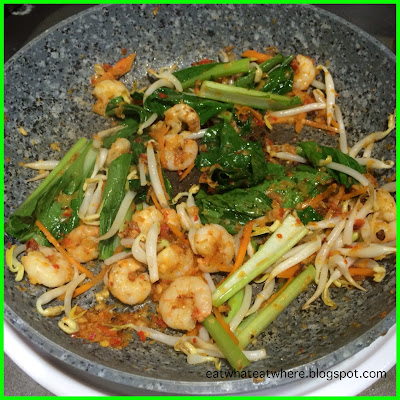 Once the carrot shreds are well softened, add the other vegetables of choy sum (Chinese flowering cabbage) and taugeh (beansprouts).  Stir-fry these for only a few seconds as they'll continue to cook further during the noodles stir-frying process. 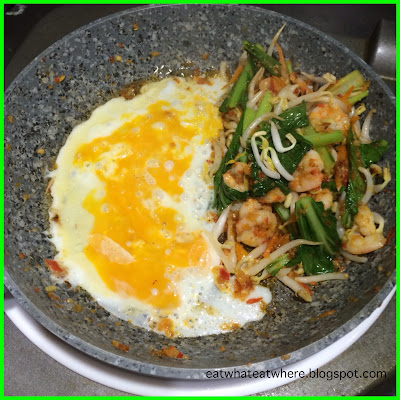 Push all that to one side, add another 1/2 tbsp of oil and crack an egg in.  Break up the yolk with your spatula. 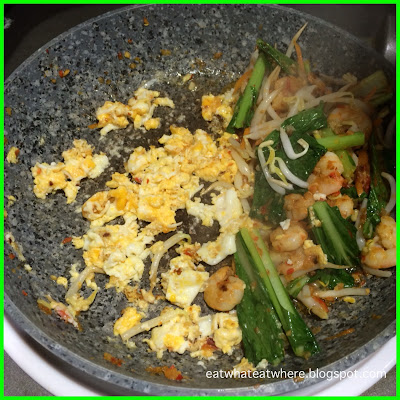 Stir the eggs around the pan until the egg bits are cooked but not necessarily fully cooked. 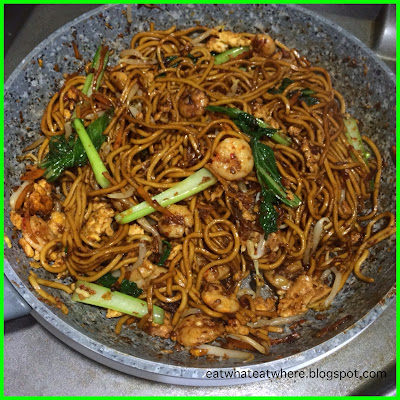 At this point, add in the mee (I used half of a 450g packet of yellow mee) and season with 1 tbsp of sweet soy (kicap manis), 1/2 tbsp of dark soy (kicap pekat) and 1/2 tbsp of light soy (you can crank up the light soy if you like it on the saltier side).  Stir the noodles around until the sauce is well mixed in.  Taste to see if you've got the seasoning right.

Now, how the yellow mee should be treated (before being fried) is a cause of contention.  Since I've never fried yellow mee before, I had to do some research and get advice from the cooking guru-s.  Some say you have to rinse the mee first (method 1) while others (like phonghongbakes) say you don't have to (method 2). I even read from the papers that some would even boil the mee first (method 3) before frying as it would take away the bitterness of the mee (it seems).  Ai, I've always had the impression that the bitterness is due to the quality of the dark soy used.  So, which method did I use?  Read on to find out. ^_~

But you certainly have to fluff up (separate) the noodles.  With some brands, the mee may even be stuck together, so I would even painstakingly separate the stuck strands one by one with my fingers.  Trust me, it's worth the extra effort.  That way, when it's fried, it won't clump together. 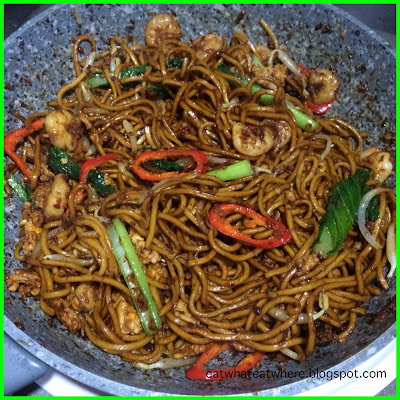 Once the sauce is well incorporated and the noodles are almost done, add in some finely sliced red chillies (for more oomph and colour).  The dark soy tends to caramelise and stick to the bottom of your pan, so add a little water to lift up all those yummy bits from the bottom of the pan (similar to deglazing the pan in western-style cooking). 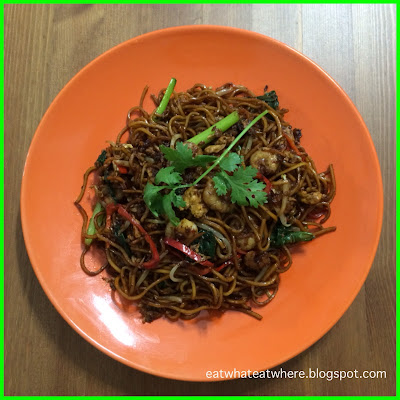 My Mamak Mee Goreng is done :)  Does it look anything like the real deal? ;P 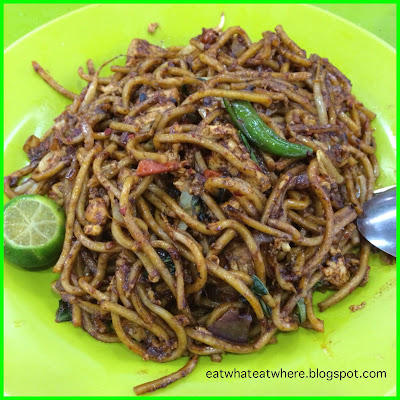 Well, here's the real deal for comparison.  Same Same? :D  Hmmm, almost...maybe?  If you like it spicier, use more chilli paste or throw in a few fiery, whole (but smashed) green cili api at the end, like what the mamak restaurants do. 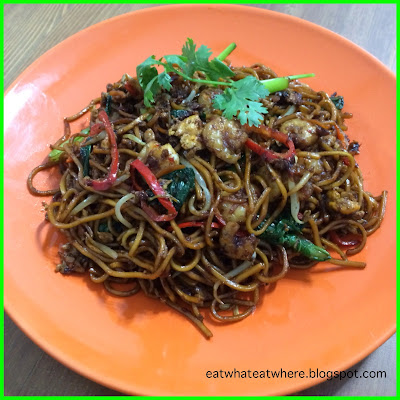 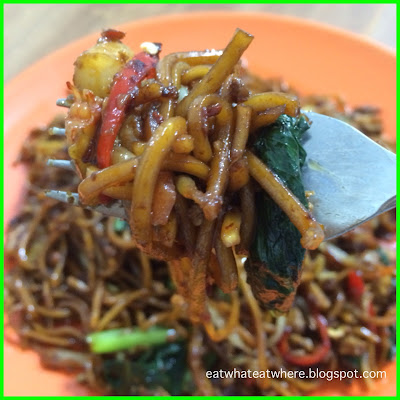 Sorry but I have to blow my own trumpet.  Who knew that my home-cooked Mamak Mee Goreng (with shrimps) would turn out so successful. ^o^ I cooked it again using the balance half of the yellow mee (with restaurant-bought fish cakes) and it was just as delicious the second time round.  Next time, I'm thinking I might even want to add some beancurd puffs (like how some mamak restaurants do it).  As a yardstick, a packet of 450g yellow mee should feed a family-of-three nicely (but also good enough for two portions of cooking with one portion able to feed two smaller tummies). 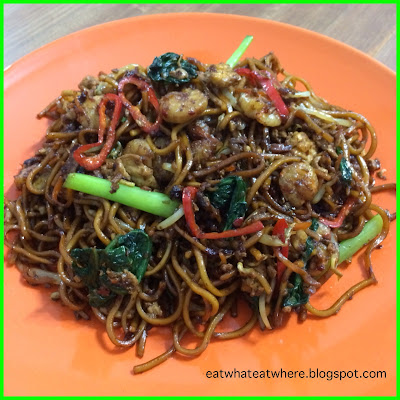 Now, coming back to whether you should rinse your yellow mee first or not, I'm glad to report that I tried both methods...and both options work.  No, I didn't get soggy noodles with rinsing them first (just make sure you drain well), neither did the noodles stick to the pan (use a non-stick one for ease of frying).  I think rinsing the noodles first got rid of or, at least, reduces the alkaline flavour in the mee, so this would be the option for me.  But I certainly won't boil the noodles first as I think they'll end up too soft and overcooked when fried. 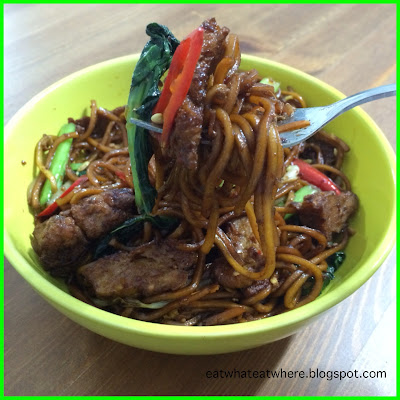 When I'm at mamak restaurants, this is one of my favourite dishes to eat (besides roti telur) but I've seen some use the curries they cooked (which may not be at its freshest) to flavour the noodles while some versions are simply too oily.  Cooking your own version at home will (at least) be fresher and a little healthier as you'll be in control of the oil and ingredients. 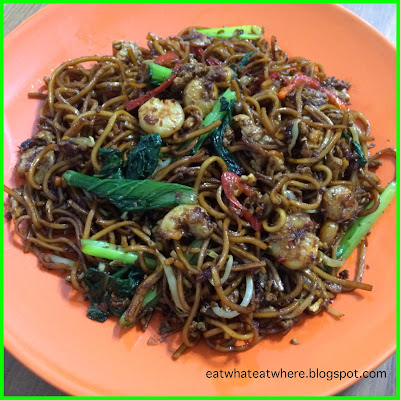 I think the three key success points to a good mee goreng (or at least the one I cooked) is the use of sweet soy and a freshly blended chilli paste, the effort to fluff/separate the noodles and not frying too big a portion at one go (just like why char kway teow tastes the best when fried plate by plate).  Sweet soy has both the properties of a thick, dark soy together with some sweetness (and I'm beginning to discover the delight of using kicap manis in my cooking).  The caramelisation of the sweet soy lusciously coats each strand of mee for a tasty mouthful. 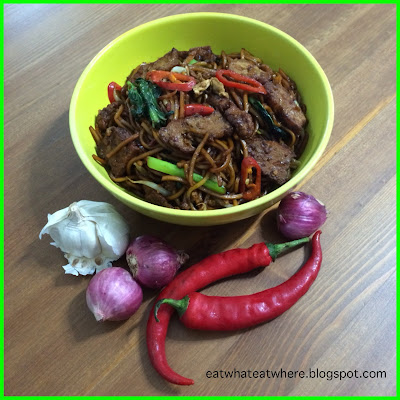 If someone like me, who has never ever fried noodles at home in her life, can make a success of this, so can you!  Try it once and you'll realise it isn't that difficult to do.  And maybe....just maybe, it'll be the start of many noodle-frying and wok-ing sessions in your home! ^.^