After a few satisfying visits in the past (some of which I wrote about here), it was back again to Flingstones @ Subang Jaya for our brunch venue of choice one late Sunday morning with family.  Walking in, the interior looks a bit more cramped than I remembered because it looked as if more tables have been added, so business must be good. 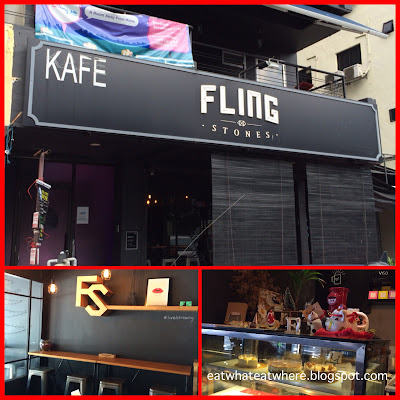 A quick glance at the menu revealed that there hasn't been a major uplift in terms of new dishes in their (now laminated) menu though there has been an uplift in prices in most of the dishes!  All the previous favourites are still there with just a few very minor additions. 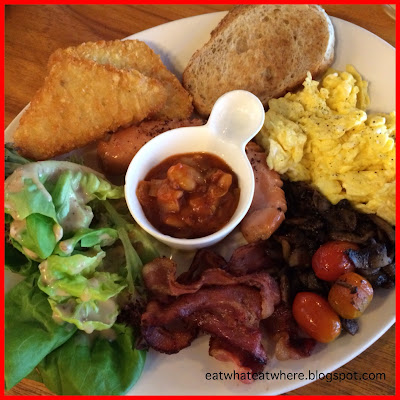 Our first order of the morning was the Big Bang Breakfast @ RM28 that came fully-loaded with three strips of pork bacon, a giant sausage, two cooked eggs (scrambled or sunny side up), sauteed mushrooms and cherry tomatoes, two pieces of crispy hash browns (in replacement of the potato rosti previously), baked beans (taken up a notch) cooked with onions, fresh greens and a slice of toast. 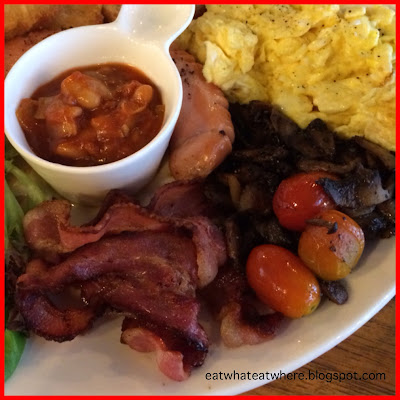 Now this big breakfast platter is big on variety...and even bigger on value.  It's built for one-very-hungry person or two-light-eaters can share which will warrant no complaints from any diner.  Absolutely loved the well-browned bacon, perfectly cooked scrambled eggs, sauteed mushrooms and cooked beans.  It still remains as one my top favoured big breakfast platters till today. 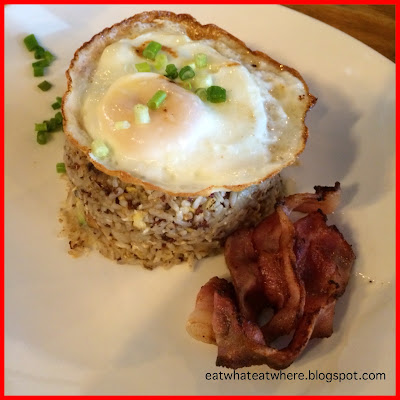 Next came the Babi Fried Rice @ RM20 which smelled of fragrant "wok hei" and filled with three types of porkilicious stuff of "chu ya char" (crispy pork lard bits), two long strips of pork bacon and "lap cheong" (Chinese dried sausage) bits.  The only difference was this....my favourite century egg was missing and its place just an ordinary (and cheaper) fried egg...and, worse still, it came with an increased price! >.< 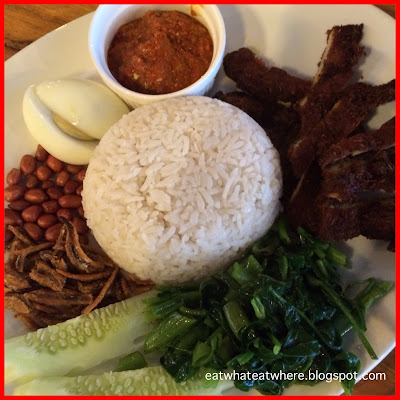 As if there weren't enough carbs for the day, we went for even more carbs with the Porky Fat Rice XL @ RM23 which contained "not too lemak" coconut milk infused carbs (of course) and mama's rempah pork belly with condiments of hard-boiled egg, crispy ikan bilis, kacang, sauteed kangkung, fresh cucumber slices and their signature oink-oink sambal.  Can it hold a candle to (say) the more authentic Malay-style nasi lemak? Certainly not...but, then again, you wouldn't have been able to have it with pork either, so.... ;) 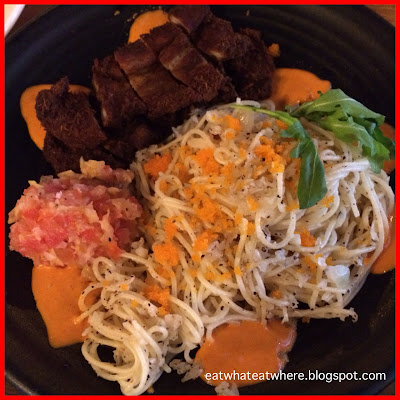 Our final dish of Babi Berempah Pasta @ RM25 is probably one of their new additions as I didn't see it on the menu the last time I was there.  It featured spaghetti served with pork belly berempah topped with tobiko and a side of mango salsa. 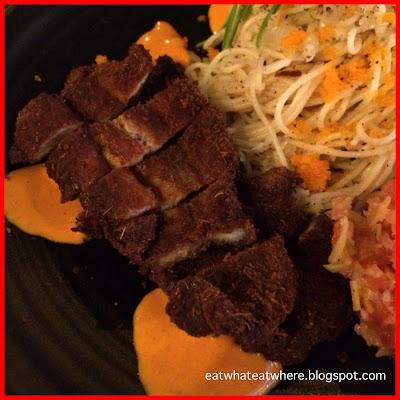 The babi berempah is the exact same one you'd get with the Porky Fat Rice, so I wouldn't label this one as something totally new on the menu but just a variation of what they have.  This time, however, I noticed that the pork belly wasn't quite the thickly cut ones we had previously but a much thinner cut (that was so lean, it didn't even look like pork belly) thereby rendering the meat drier and a little tougher.  No mention was made of the sauce (in the menu) but it tasted something like a spiced up Thousand Island sauce to me.

If you're wondering where's the mango salsa (that was stated in their menu), I was too.  We (unfortunately) didn't get a mango salsa but what I felt was a cheaper alternative of a tomato and onion salsa.  Actually, I'm not an advocate of restaurants changing or substituting an ingredient on the dish (than what was originally listed in the menu) as it makes me feel that I'm getting something inferior or a cheaper alternative.  After all, it's the restaurant's responsibility to get their ingredients prepped (correctly) and ready to go when their doors open and, in this case, mango is not an ingredient that's hard to get, so I don't see why it has to be substituted. Unfortunately, this scenario is nothing new as I've experienced this many times.  If it's an imported ingredient that's difficult to get here, I'd probably be more understanding but I also think restaurants need to learn common courtesy to (at least) let us know, apologise or ask if we'd mind when they plan to replace a certain ingredient.  That way we won't feel like we were 'shortchanged'! >_< 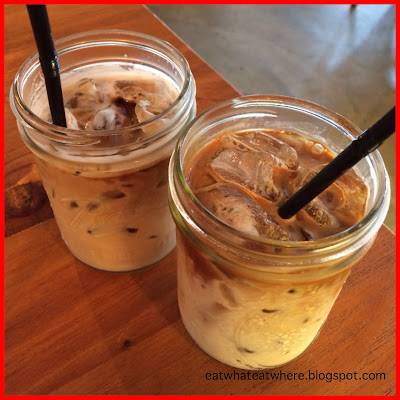 We like the coffees here.....and our usual would be Iced Hazelnut Latte @ RM15 and Iced Latte @ RM13.

I'm glad they've kept up with the taste of the food (the Big Bang Breakfast is still banging) as the place still delivers for us in that respect although there were a couple of dishes (with increased prices) that came with some minor 'enhancements' which I wasn't exactly fond of and weren't necessarily for the better unfortunately (in my opinion).

I guess we can't run away from price hikes as things are getting more expensive by the day.  Overall, the prices here have increased by about 10% - 20% since my last visit.  A consolation, at least, is that this place continues to not charge the 10% + 6% although, if you look at it from another angle, the 16% is now factored into the increased prices already! :P