I was looking forward to come to this mall this time as I was given the heads up by one of the blogs I follow that something new opened up here recently to offer me a new place to eat (since I've eaten almost every other place here). 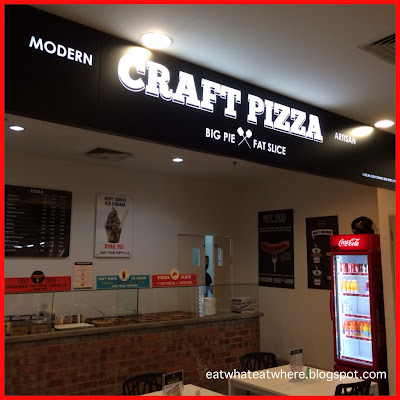 So, on a Saturday evening, I was here as usual to restock Cookie's treats and stopped by at Craft Pizza @ Great Eastern Mall for an early dinner.  It's a really small place with just about ten 2-seater tables. 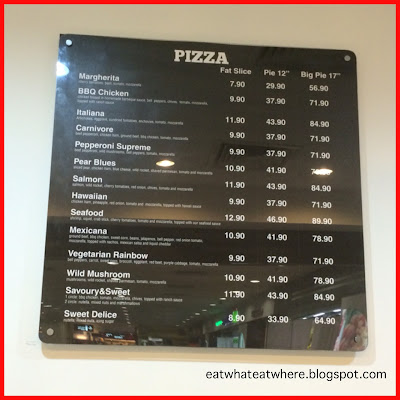 We were greeted by a person manning the place (with an accent) whom I assume to be the Italian owner. From the menu on the wall, I gathered that they offer pizzas by the piece (which they call Fat Slice), in a pie of 12" or a big pie of 17". 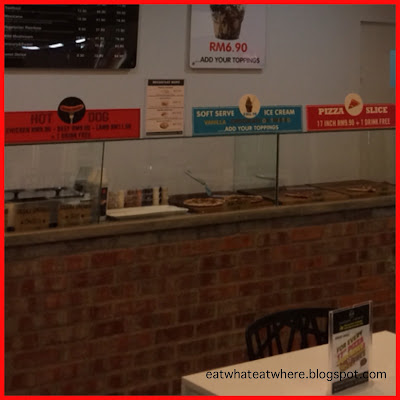 When we tried to order the pizzas by slices (so that we could try more options), we were told that they don't have the ones we want and that pizzas by the slices were limited to just the ones at the counter.  Incidentally, there were only two slices left and they looked like they've been there for a while! >.< 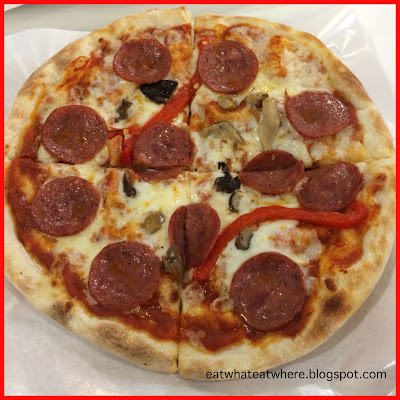 There weren't options for half and half either for the 12" pie (only the big pie).  Luckily, we were told that they have 8" pizzas and (again) I saw two left on the counter.  I made sure not to order those two flavours and went with one of our usuals, the Pepperoni Supreme (8") @ RM12.90. 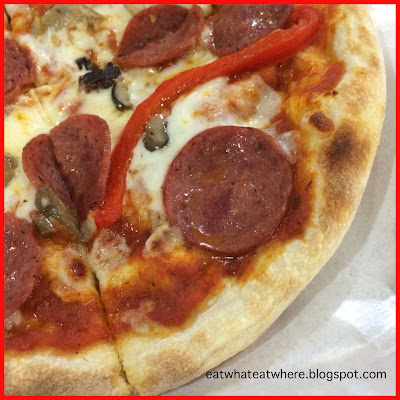 The pizza was filled with beef pepperoni slices, some small pieces of wild mushroom, two thin slivers of red bell pepper and mozzarella (there weren't any tomatoes even though it was listed as an ingredient). 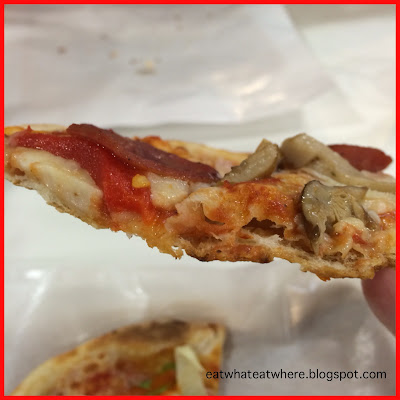 The dough here are those thin and crisp ones...and it was exactly that! 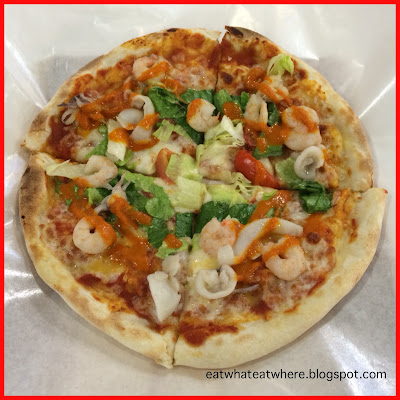 Our other choice was the Seafood Pizza (8") @ RM12.90 coz I got attracted by the list of ingredients comprising of shrimp, squid, crab stick, cherry tomatoes and mozzarella topped with their seafood sauce. 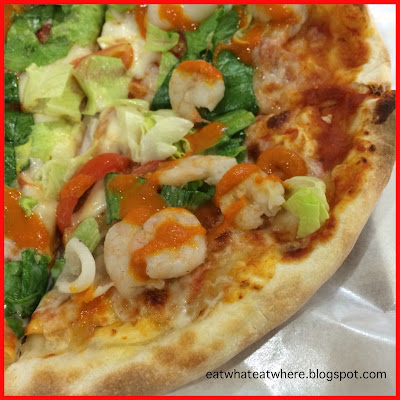 It came with an additional ingredient....iceberg lettuce which is a bit unorthodox for a pizza...no?  The tiny pieces of squid had a very soft, almost mushy, texture.  The prawns were smallish and didn't have much flavour and looked like those pre-peeled or pre-cooked frozen shrimps from a packet.  I didn't see any crab stick and found only one slice of cherry tomato.  Maybe I shouldn't complain too much seeing that the price is cheap? ;)

As the pizzas didn't wow us, we weren't inclined to order more types for tasting and instead went for an order of hot dog as I noticed that they had chicken and beef (RM9.90) or lamb (RM11.90) at the counter. 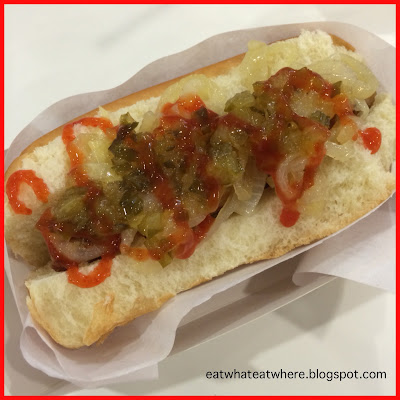 We thought redemption was on its way but we were sadly mistaken.  The Chicken Hot Dog @ RM9.90 that arrived with some cooked down onions was cold and unappetising.  I guessed that much when I saw the foreign worker taking out the hot dog buns from a plastic bag (store-bought buns?), slicing it in two and putting in the hot dog just like that without doing anything to it.  There was no buttering of the bun or grilling it nor heating up the hot dog again. 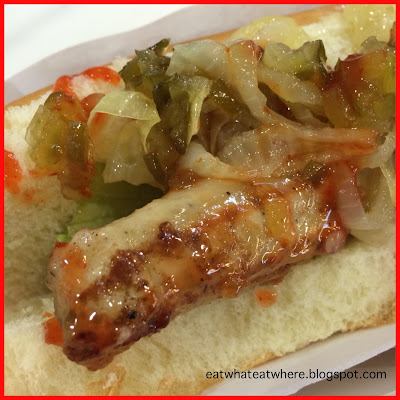 Haiz...I should have known better.  These were probably leftover hot dogs (like their leftover pizza slices) from earlier in the day but I thought they would at least heat it up.  You can help yourselves to the condiments (and free drinks) but no amount of relish and chilli sauce could make up for the taste of the cold hot dog. 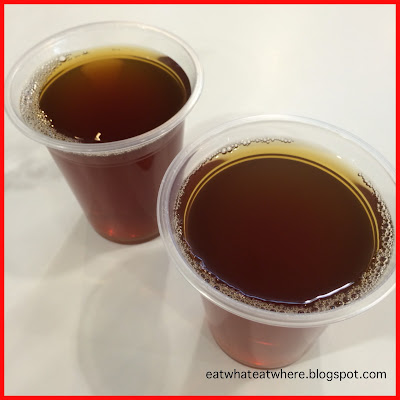 Our free drinks of lemon and peach tea. 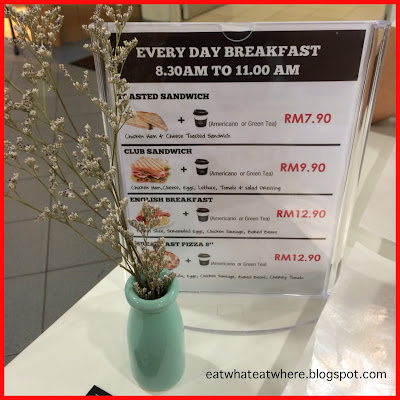 Looking at their promotion, it looks like they have quite good breakfast deals that seem to cater to the office workers cementing my believe that the 'right' time to visit is during office hours which means zilch for those of us not working in the area.

Side Story #1
If you list on your menu that you sell pizzas by the slices but yet you don't have it available when we want it tells me that you're not 100% committed to your customers.  Because there weren't any customers (we were the only customers there when we arrived at 6.30 pm and the only customer when we left), you'd rather stinge and not make a new pizza in case the pizza is wasted if no-one else buys the rest of the slices.  If selling pizza by slices isn't viable, then don't offer it and let your customers know that the only option are whole pizzas.  If you offer slices, I'd expect to get a slice at whatever time of the day (unless you state otherwise).

Side Story #2
When I paid for the two pizzas (RM12.90 x 2) with a RM50 note, the owner gave me back a change of RM20 and had to go back into the kitchen to borrow the rest of the change (from one of his employees, I guess).  He gave me another RM5 change when he came out and not the right change of RM4.20.  Since I wasn't short-changed, I didn't make a fuss (his cash till obviously didn't have any change left).

Another time was when the foreign worker brought me the hot dog, I gave him RM10 and he told me he didn't have the 10 cents change for me.  Again, I wasn't going to make a fuss since I was already charged 80 cents less earlier but it just looks very unprofessional to me (plus you may encounter some who do mind if you don't give them the 10 cents change because it's a matter of principle).

Side Story #3
The same guy who prepared the hot dog also doubles up as their delivery man when I saw him leave with a box of pizza and his bike helmet.  Again, you can understand my apprehension coz cleanliness may be an issue (he makes deliveries in our dusty traffic...and then comes back to make me hot dogs?)....yikes! >_<

I must admit that the photos I've seen of their pizzas on one of my favourite blogs did look pretty good and appetising.  Maybe it's because those were whole pizzas, freshly made or specially prepared.  Maybe the food is fresher with more choices earlier in the day with the larger office crowd coz this place is really deserted on weekend evenings.  Since I've only tasted two 8" pizzas where the dough was alright, thin and crisp, but with scant toppings and cheese that didn't wow (I can't believe I just said I wanted more cheese!), I won't conclude that they weren't 100% good unless I've tasted a whole pizza to be fair.

Even though I can overlook the taste that wasn't quite all there that evening, I don't think I can overlook the way they set out to conduct their business....not having fresh pizza slices and hot dogs for their customers in the evening (but let them have whatever's leftover from the day), not bothering to ensure that their till has small change, not hiring enough help, things like that.

And knowing that a good wood-fired oven pizza is just a few steps away at Alexis Bistro (at around the same prices with better ambience to boot) makes it doubly hard for me to want to venture here again for another pizza! :~(

Maybe I'm being too harsh but that's how I see my dining experience here...perhaps you may (and I hope you do) have a different experience from mine.