Chateraise Patisserie @ Suria KLCC, a famous Japanese pastry and cake shop, finally landed on our shores with its first store in Isetan KLCC. 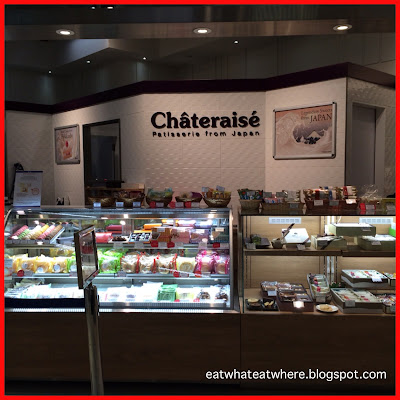 Opened in March 2016, they have since opened another outlet in Isetan 1 Utama (in June) and, more recently, in Publika this month. 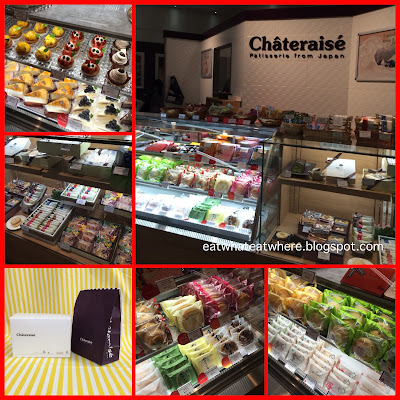 I've been to the one in KLCC in the mornings, at dinner time and on weekends....no queues to contend with whatsoever more than six months since opening...everything dies down after the initial hoo-ha (hehe!) :D 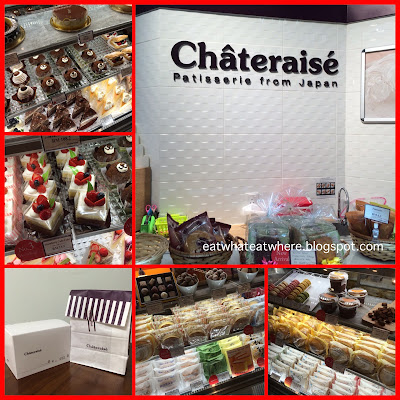 Walking into an outlet of Chateraise, you can't help but be mesmerised by the array of absolutely colourful and eye-catching cakes and pastries on offer, all air flown direct from Japan. 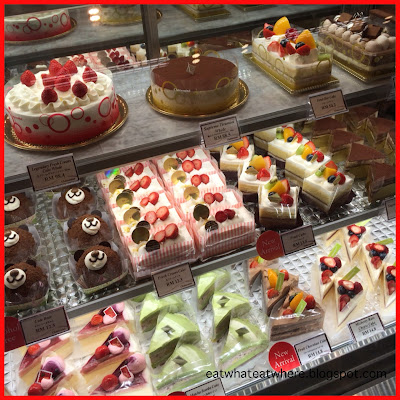 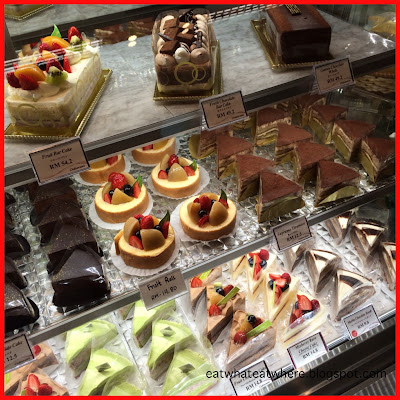 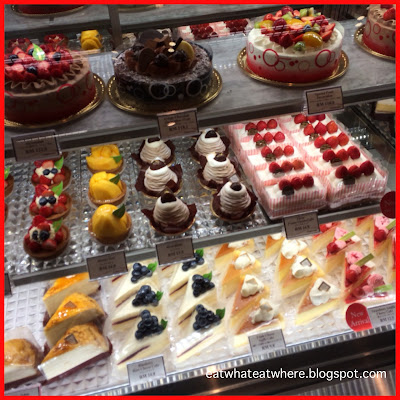 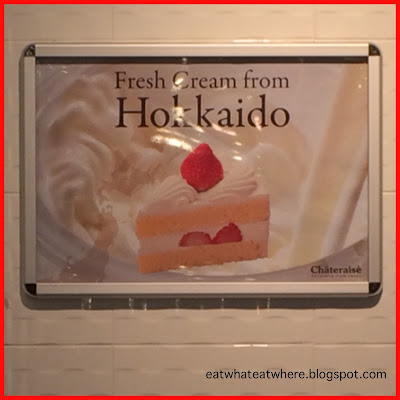 In their marketing and promotion, you'll probably hear (or see) this over and over again.....Hokkaido Fresh Cream and natural water from Hakushu which supposedly make their sweets extra delicious. 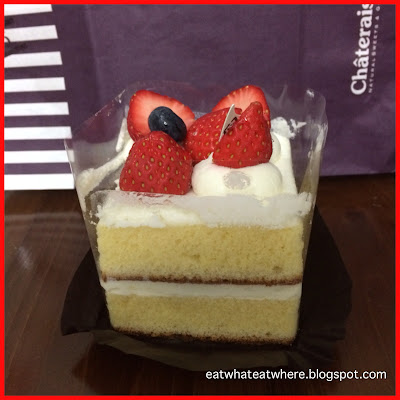 The Strawberry Cube Cake @ RM13.50 is one of the hot selling items in Chateraise (No. 3 based on the display card).  This cake has fresh whipped Hokkaido cream sandwiched between two layers of Japanese sponge cake. 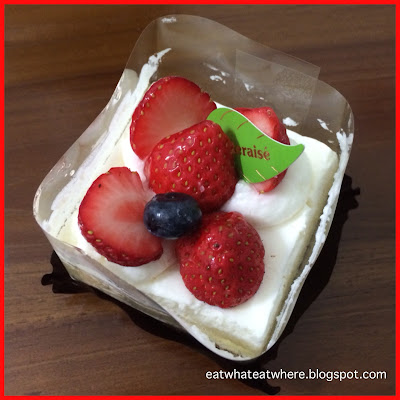 It's further topped with more cream and the fresh strawberries and single blueberry provided a fruity zing.  The cake is soft, light and airy and I found the sweetness just nice for my liking. 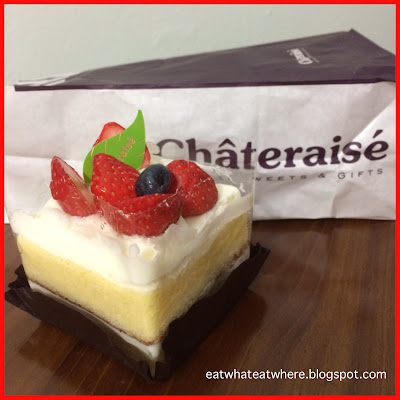 The cream isn't cloying at all (coz it's so light), so, you won't feel "jelat" eating it...but, in the remote chance that you do, the many strawberries on top provide relief in terms of acidity and freshness that will cut through any cloying taste that you might have. 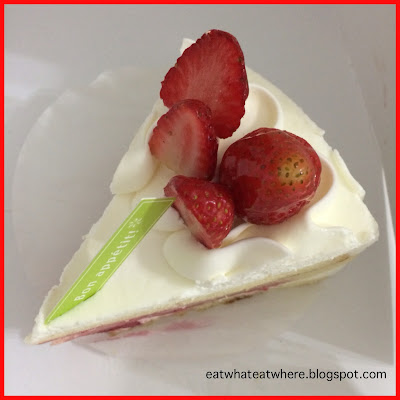 The Legendary Fresh Cream Cake @ RM14.80 is their No. 1 hot selling cake here.  Looking at it, you can see that it's quite similar to the strawberry cube cake except this one had more of the fresh cream going down the sides of the cake and probably because of that, it was delicately sweeter for my taste buds.  I actually preferred the previous one just because it had less fresh cream. 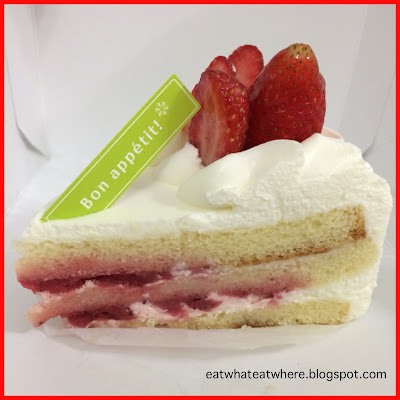 I believe Japanese strawberries are juicier and sweeter but these ones weren't as sweet and luckily so, they (together with the layers of strawberry cream and fresh strawberry compote) provided some tartness to counter the sweetness of the fresh cream.  It was good but not legendary status...as its namesake....hehe! ;D 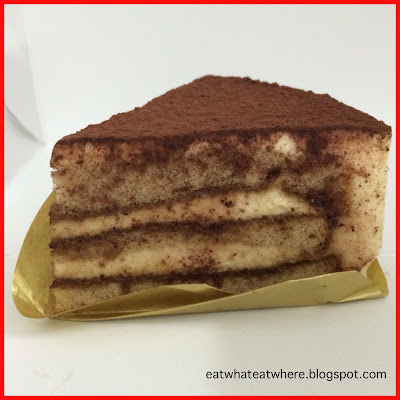 And you know I love my coffee, so I just had to get a piece of Supreme Tiramisu @ RM12.50 which quickly turned out to be not one of my better decisions. 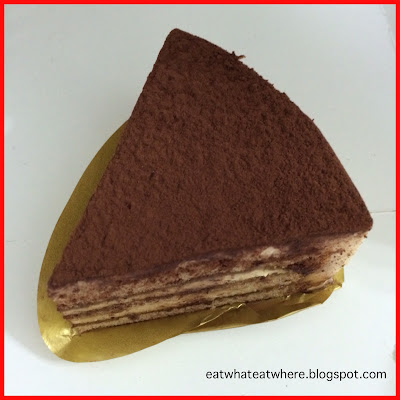 It didn't have much of a coffee taste and the cocoa powder on top was flavourless and of a poor quality...it was like I was eating dry sand (to put it bluntly).  Bluek! >.<  It's safe to say you can skip this one entirely. 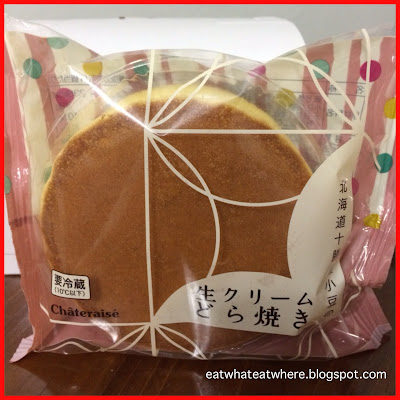 The Azuki Bean & Cream Pancake (aka dorayaki) @ RM4.80 is the No. 3 hot selling pastry in Chateraise....and I can understand why!  Coz it's so darn good!!  It consists of two small pancakes wrapped around a filling of Adzuki red bean paste and whipped cream. 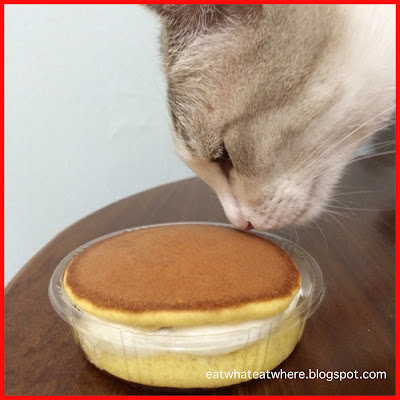 Even Cookie knows a good thing when he sees one (he came to sniff it the moment I put it on the table to be photographed)! :D  This dorayaki was absolutely divine. 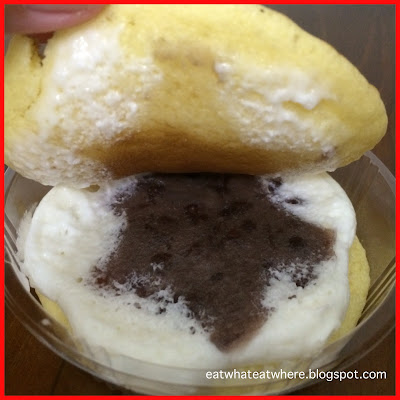 Let me give you a sneak peek inside :)  The whipped cream is so incredibly light, you feel you're eating foam (or air).  This actually reminded me of the lovely Creamy Anpan I had from The Loaf (another Japanese concept bakery). 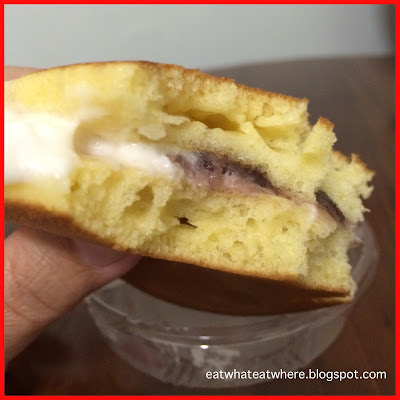 Taking a bite of the ultra fluffy dorayaki, together with the absolutely delicious red bean paste, the sweetness was just right for me.  One bite and it's pure love....the best dorayaki I've had so far...and worth every cent of the RM4.80 I paid!  I can easily gobble up a few of these if I wanted to.  I'm so coming back for more!! 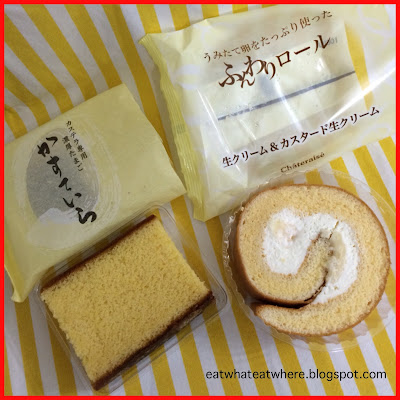 On another visit, I bought a piece of Fluffy Cream Roll and Japanese Sponge Cake to try. 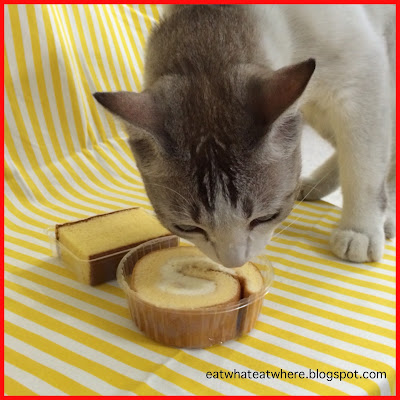 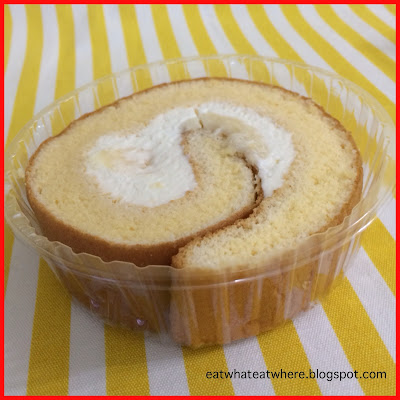 The Fluffy Cream Roll @ RM4.80 is also one of their best selling items.  Roughly about 3.5 inches in diameter, it's quite the price to pay for such a small swiss roll-lookalike.  It was decent, maybe not quite as fluffy as initially thought, but the Hokkaido cream did its part to moisten the roll. 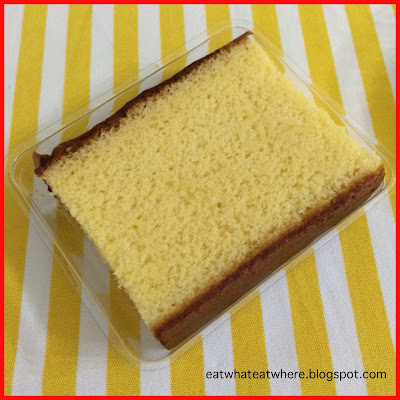 The Japanese Sponge Cake (aka castella) @ RM4.80 was a piece of cake about 3 x 2.5 inches (again a small piece).  This plain sponge cake was soft but a bit dense and dry. 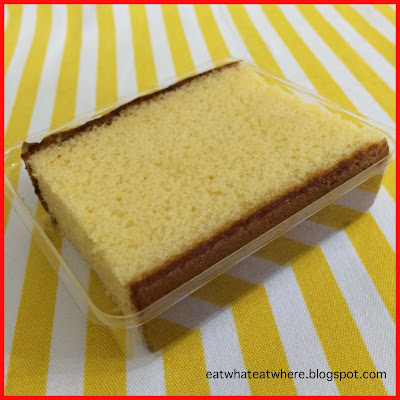 I wonder if it's because of the long shelf life (it had a further 22 days from the date I bought it, actual shelf life could be longer, as opposed to 3 days for the cream roll and dorayaki).  I remembered the one from Lavender Bakery was fluffier and lighter. 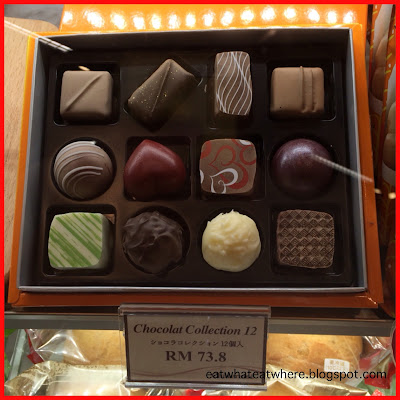 Besides cakes and pastries, they also offer macarons and even these delightful looking dainty chocolates...so pretty!  And in their newly opened outlet in Publika, I also see (from their Facebook page) baked cheese tarts, mitarashi rice dumplings (?), fruit jellies, ice creams and sherbet (sorbet?).

To know what's good here....just follow one simple rule.....stick to anything that has Hokkaido's fresh cream in them (*wink wink*) coz those that I tried that didn't have that fresh cream weren't as successful.

I've only scratched the surface with this one as there are loads more on to try but the high prices stop me dead in my tracks...though it won't stop me from getting my all-time favourite dorayaki! ^_*