After colouring my first three pieces (Enter My Secret Garden, Tree House & Love Actually) all in symmetrical form, here comes a piece that's not (and by that I mean the colouring though the drawing by Johanna Basford is symmetrical).

Wanting to try some other form of colouring, besides colouring symmetrically in all my previous pieces, I got some inspiration from some of the completed pieces I saw online and went a different route with this one which I shall name Rainbow Tree :)

My approach with this piece was to colour them in a spectrum of colours like the rainbow (or Sir Isaac Newton's Colour Wheel)....."ROY G BIV" (red, orange, yellow, green, blue, indigo & violet).  I tried my best to choose colours closest to the spectrum but I was limited by my box of 36 colours! :'( 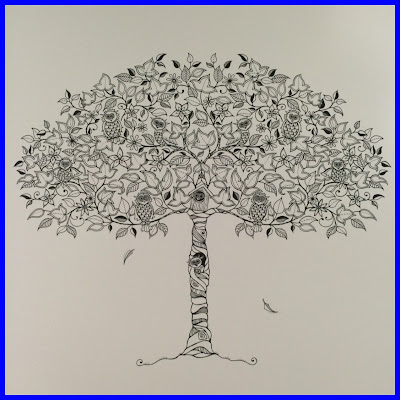 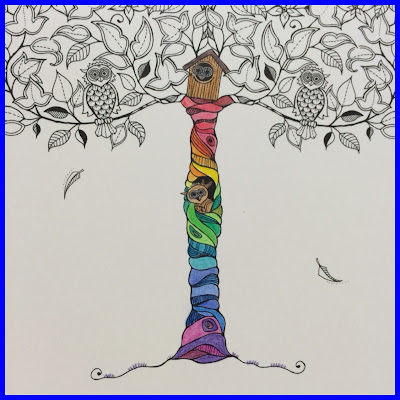 I started with the tree trunk and worked from bottom to top starting with violet and ending with red. 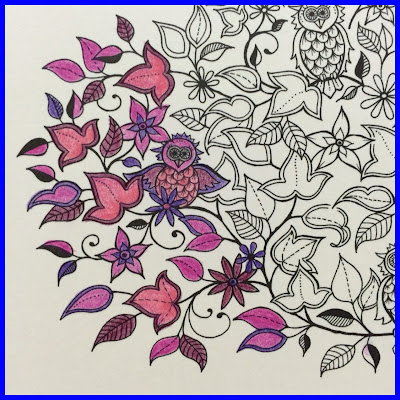 Then I began to work on Section I of the tree leaves starting with violet and colouring from left to right.  I only had 3 shades of purple  to work with...and two of them were more reddish-pink than purple (there were six violet colours listed in the colour chart that came with my box of colours but...argh....I didn't have a single violet in my box) T_T 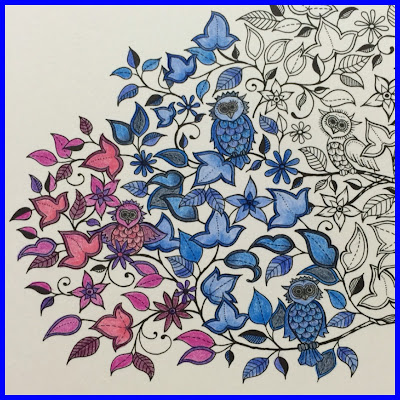 Then I moved on to Section II with indigo and, since there was only one shade of indigo, I had to combine it with four other shades of blue. 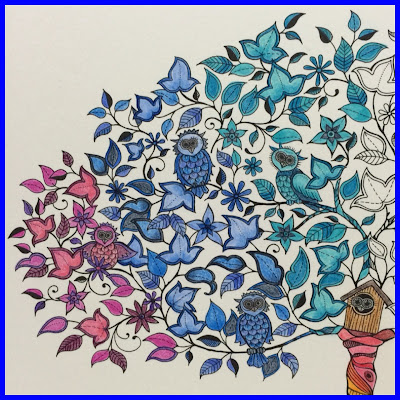 Since I already combined indigo with blues, I had to go blue-green for Section III.  This was really tough as I only had two colours to play with (+ a little cheat help from one indigo shade). 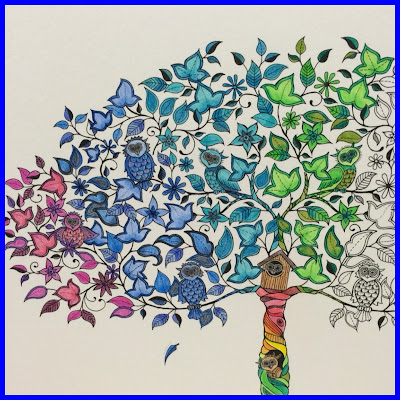 For Section IV, I got back on track and had five shades of green to work with (yay!) ^o^ 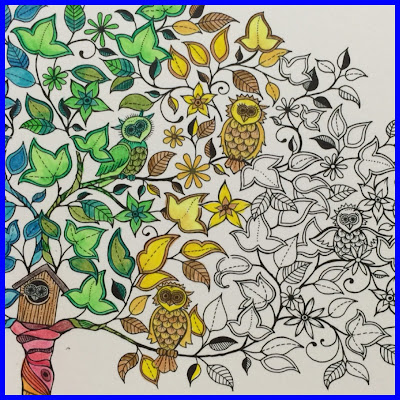 Following the spectrum, we come to yellow for Section V and, although I had three shades of yellow, one was too light to be visible, so I could only use two of them.  Even if you do shading with yellow, it's too light to be seen, so I had no choice but to add some browns to make it more visible. 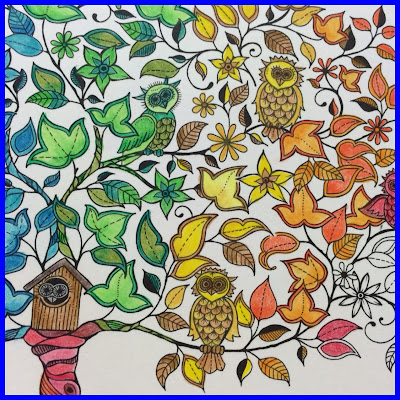 Section VI is orange and (again) I have only two shades of orange and so I added one dark yellow coz it was more orange than yellow.

Since the drawing is symmetrical, obviously the colouring should have been divided into six parts but in order to accommodate the colours of the rainbow (of which there are seven), I had to squeeze the yellow and orange into smaller sections. 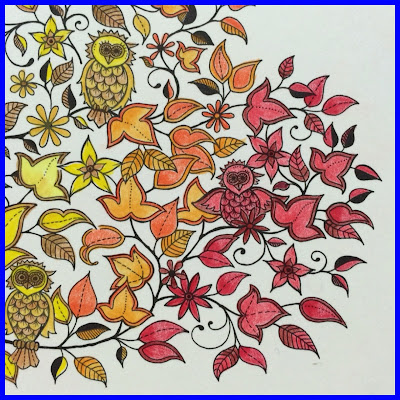 Finally, I finished off with red for Section VII.  For shades of red, I had four choices! ;)

Tip #10 - If you're not sure what colours combine well together, using the rainbow spectrum as a guide is certainly helpful.  Otherwise, just shade a bit of the colour next to one another on a piece of paper to see how it looks before finally deciding which colours to go with.

Tip #11 - And because of my limitation of 2 - 3 colours for some of the colour blocks, I tried to apply different pressure when colouring with the same colour to make it look as though there were more than the mere 2 - 3 colours. 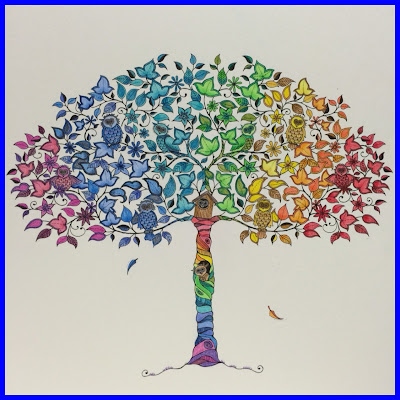 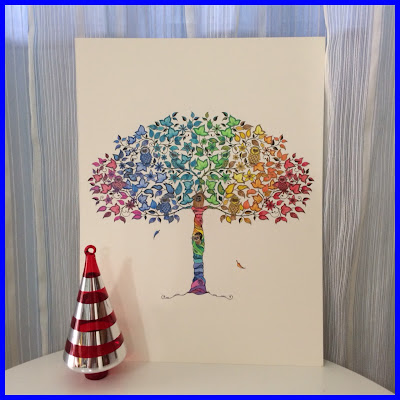 Some of the blocks of colour were a bit trying to do coz I had limited choices for each colour....this is the time you'd be wishing you had a box of 120 colours instead!  But, in the end, I made the most of what I have...and this was the end result ^_^ 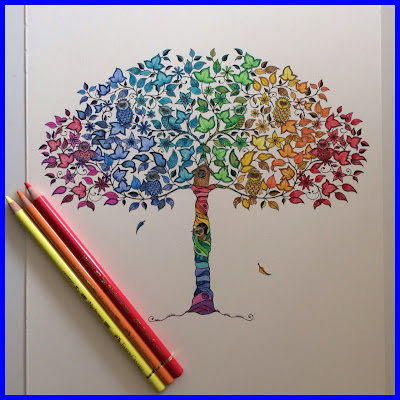 Ditching my symmetrical form of colouring...for once....to go with different blocks of colour, I'm pretty happy with the outcome.  Something different...though I think I still prefer symmetrical colouring which makes the piece seem more structured overall. 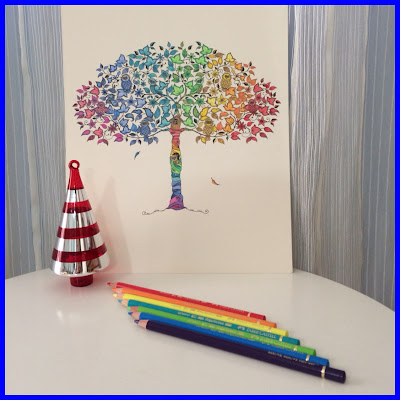 I have to say this was my toughest piece yet...probably because the drawings were so intricate making it more difficult to colour + the limitation of colours in each colour block made it challenging as well.

Email ThisBlogThis!Share to TwitterShare to FacebookShare to Pinterest
Labels: My World of Colours