I've never won any blog giveaways for the sole reason that I've never participated in any of those blog giveaway contests.  So, I was pleasantly surprised to have won some vouchers for merely commenting on someone's blog.  Thanks to Mimi's Dining Room, it seems I have won two RM10 vouchers to Sakae Sushi ;) 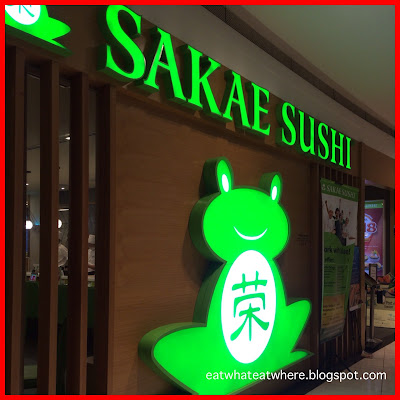 So, what better excuse than this to revisit Sakae Sushi since it has been a while since I last dined here.  I decided to try the Sakae Sushi @ Nu Sentral, a newer outlet than the one we use to frequent in Cheras Leisure Mall. 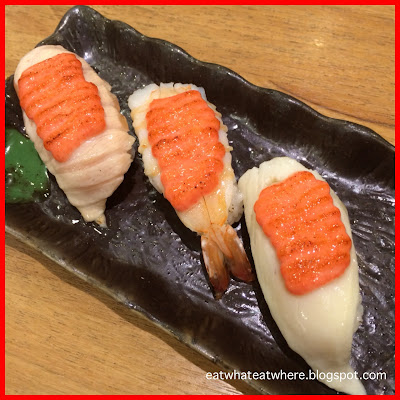 We ordered some new items on the menu starting with the Mentai Zukushi @ RM7.99 which comprised of a piece each of salmon mentai sushi, ebi (prawn) mentai sushi and shiro maguro (white tuna) mentai.  The mentai at this outlet (I noticed) seemed to be in a darker shade of orange, not quite as tasty and also far saltier than the one I had at their Cheras Leisure Mall outlet. 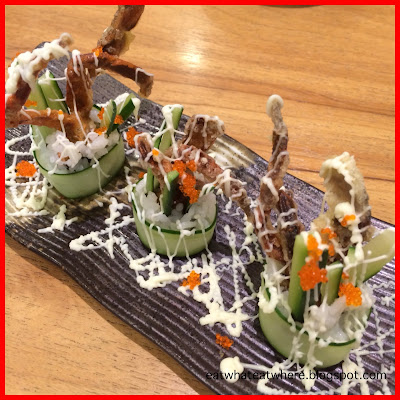 Another new item was the Spider Roll @ RM11.99 but we got it for RM8 since it was one of their Awesome RM8 Deals promotion (which has already ended).  It consisted of a piece of soft shell crab wrapped in a very thin slice of Japanese cucumber with sushi rice and sticks of cucumber, topped with flying fish roe and finished with a drizzle of mayonnaise.  The crispy, savoury soft shell crab with the crunch of the Japanese cucumber sticks and salty flying fish roe made it a very lovely bite.  It was my favourite of the night. 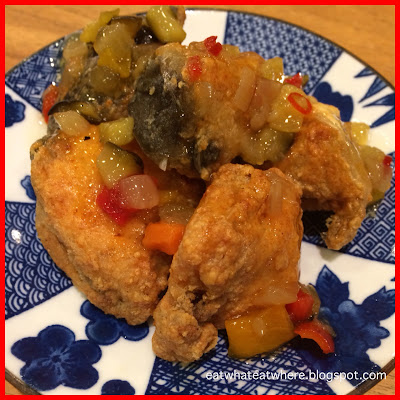 The Salmon Kama-age Nanban @ RM10.99 was yet another new item I spotted on the menu.  It's actually deep fried salmon head with Nanban sauce (I had no idea what this sauce was when I ordered it).  It turned out to be rather similar to our sweet-and-sour sauce with diced carrots, capsicum, onions, some pickled vegetables, mushrooms and bits of chilli.  The salmon head tasted a bit fishy, not something I would order again. 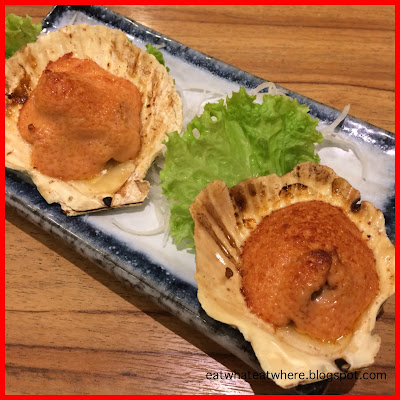 I couldn't resist ordering the Hotate Mentaiyaki @ RM10.99 which featured two pieces of grilled scallop with mentaiko mayo.  The scallops were fresh and juicy. 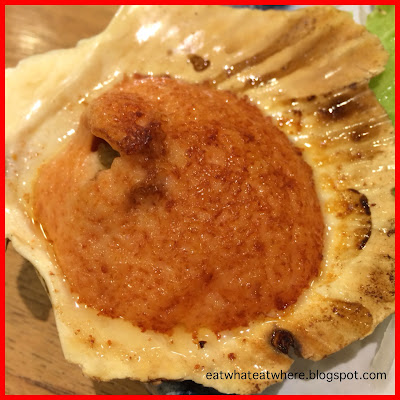 And if you love mentai (like I do), you'd be in "mentai heaven" as it came with a very generous dose of mentai on top.  But, sometimes, too much of a good thing ain't necessarily good....as it became overly salty with too much mentai! >.<  I had to scrape some of it off (I can't believe I just said that) but, if I had some sushi rice, it would have been a different story altogether. 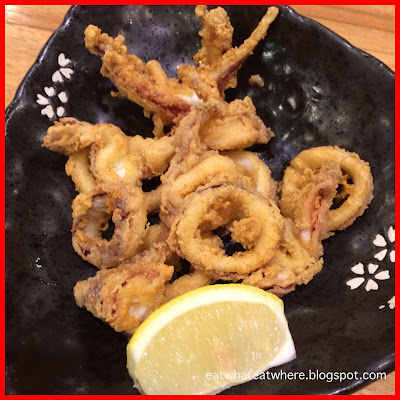 We just had to have a common order of ours, the Ika Karaage @ RM11.99 of deep fried marinated squid.  Especially love the tentacles! 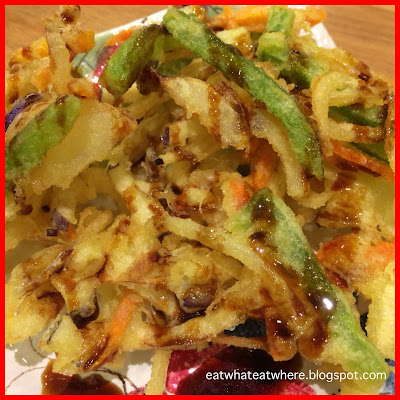 And an order of our usual Yasai Kakiage @ RM4.99 or mixed vegetable tempura. 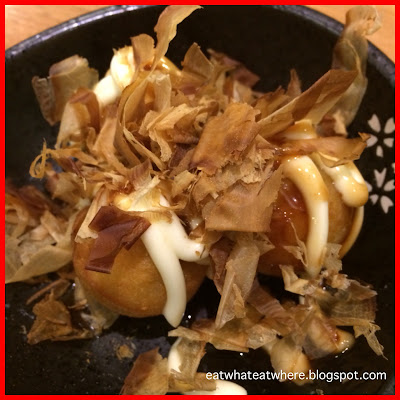 We also had the Takoyaki @ RM5.99 with diced octopus filling, topped with bonito flakes and a drizzle of mayo.

Some of the sushi plates from the conveyor belt..... 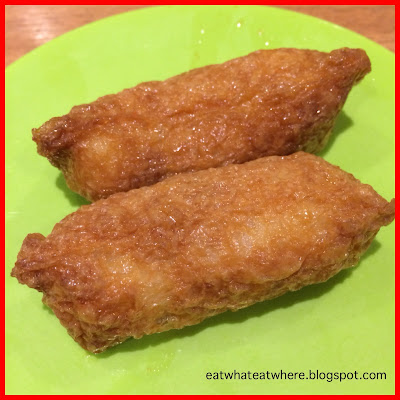 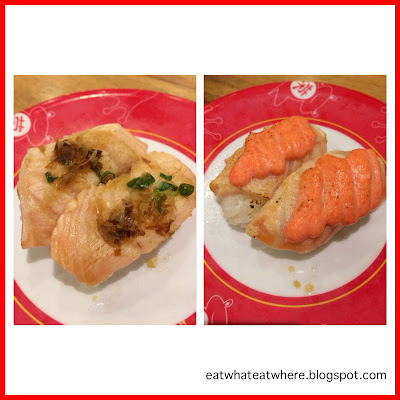 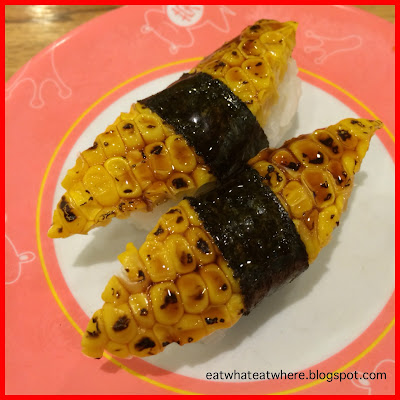 The Grilled Corn @ RM2.99 arrived looking like it just came off the grill...nicely grilled with a smoky flavour but it wasn't....it was cold! >_< Huh? 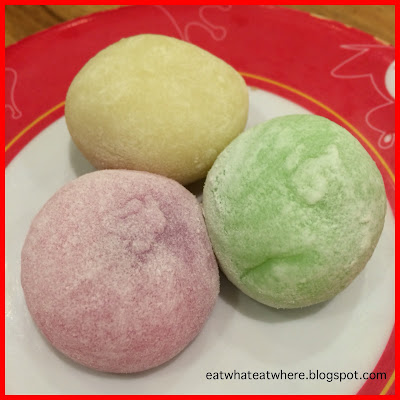 Finally ending with a favourite dessert of mine, a plate of Mochi @ RM4.99, chewy and not too sweet in flavours of peanut (the yellow one), red bean (the red one) and pandan (the green one). 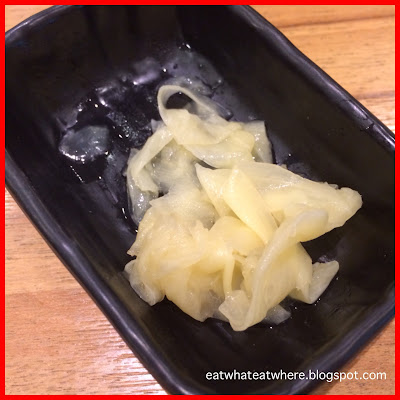 Their pickled ginger is one of the thinnest I've encountered but also a bit too tart for my liking.

Sakae Sushi has always been an option when we want affordable sushi.  The a la carte dishes we had here had some hits but there were more misses though.  For some reason, I wasn't impressed with the food at this outlet....especially their mentai!  I remember that my dining experience at their Cheras Leisure Mall outlet (the only other Sakae Sushi outlet that I've tried) was more pleasant as the food was better in terms of taste.