Boat noodles became one of the latest food fads of 2014, but I still had not tried any.....call me outdated if you want...until now! ;D  Boat Noodles (I think) was the first to open shop before other similar-type boat noodle restaurants started sprouting up all over Klang Valley.  It became such an instant hit that there were insanely long queues at their restaurants (especially at its first outlet in Empire Damansara). 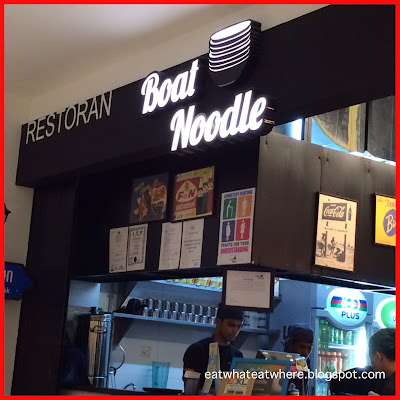 Boat Noodles have since gone on to open a few more outlets.  Now that the queues are a thing of the past (or, at least, have died down somewhat), I finally succumbed to my curiosity and decided to try the Boat Noodles @ Ikon Connaught for dinner one day. 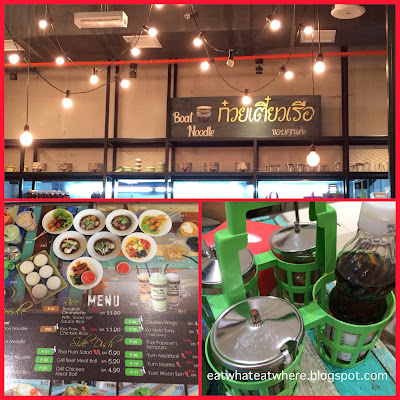 When you visit Boat Noodles, the one dish you must try is none other than their signature boat noodles, of course, and so I ordered 2 of each to start with...chicken (dry and wet) and beef (dry and wet).  When the noodles arrived (however), you can't really differentiate the dry from the wet as they all looked similar to me (which was wet).  I tried asking the server which is which but it was like "a duck talking to a chicken" (these foreign workers can hardly speak English and you end up not understanding them and they don't understand you either). 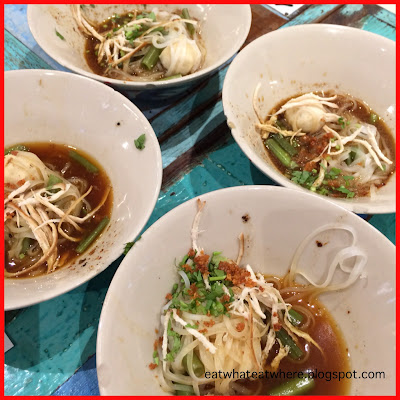 No matter though because, whether wet or dry, they all had a pleasant enough flavour with an undertone of savoury-sour and a hint of spice.  These are the Chicken Noodles (Wet & Dry) @ RM1.90 a bowl. 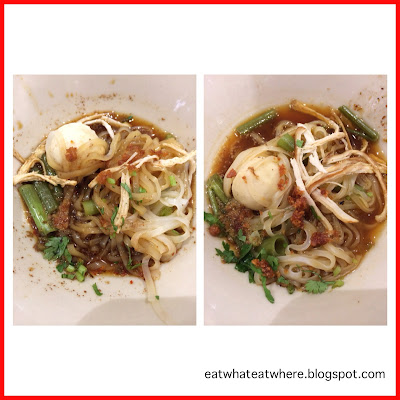 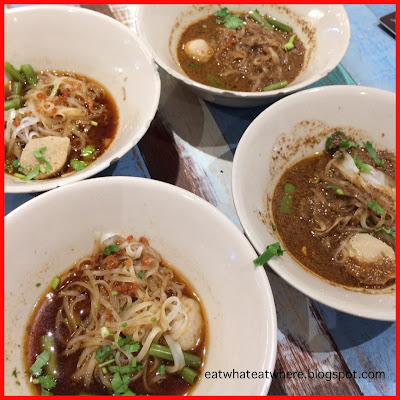 And these are the Beef Noodles (Wet & Dry) also @ RM1.90 a bowl.  The bowl of beef noodles came with only half a beef ball, some minced beef, water spinach (stalks again) and chopped coriander. 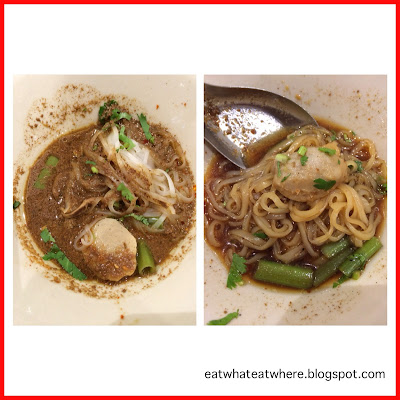 The texture of the noodles is a bit similar to those Pad Thai noodles, probably a bit thinner and softer.  Of the two, the beef noodles were definitely more savoury and flavourful.  As these noodles come in small servings, which you can slurp up in one or two mouthfuls, one needs 5 bowls (or more) to fill one up. 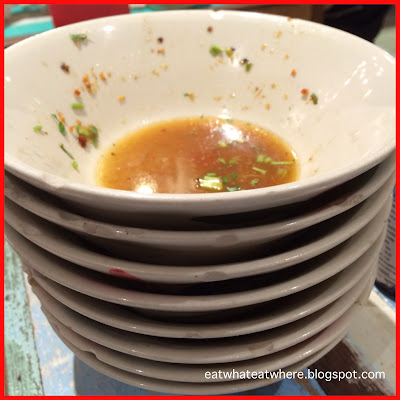 Of course, once we're done with our bowls of noodles, I just had to stack 'em up!  And, so I did...it's like a gimmick or trend here...plus there's actually no place on your table for your empty bowls...kekeke! ;D  As my family wasn't that into these noodles, our stack looked miserable (I ate 5).  The bowls (chipped and all) have obviously seen better days! 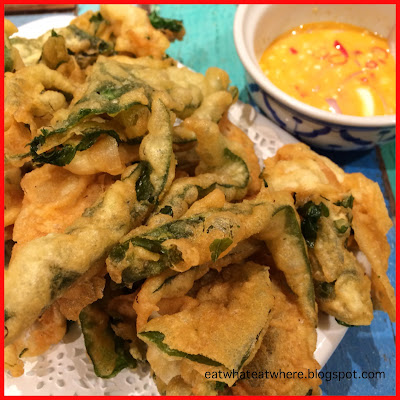 I ordered a number of snacks for sharing, starting off with Thai Popeye's Tempura @ RM6.90  and I found the portion very generous for the price paid.  The tempura battered spinach leaves turned out super crispy! *Popeye would approve* 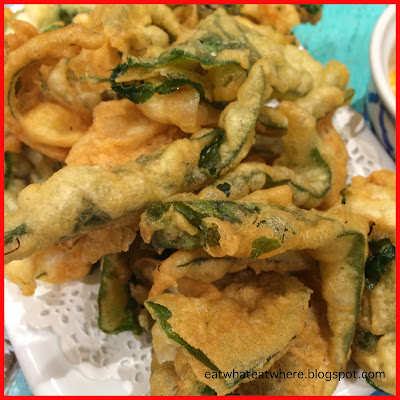 I was amazed at just how crispy it was and how it stayed that way throughout our dinner.  Although the tempura served in Japanese restaurants may still be a notch lighter...but this is still a darn good tempura.  On its own, it may seem a bit bland as it needed the distinctive dip that was served with it. 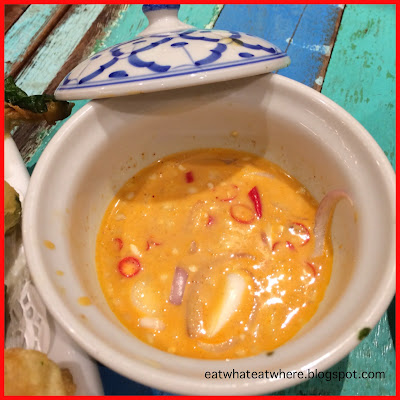 The dip tasted like a rich Thai curry, with a heavy dose of coconut cream flavour, but fresher due to the addition of raw ingredients of finely chopped garlic, onions and bird's eye chillies.  I'd call this a Thai (orange) curry since it looks like a cross between a Thai red curry and a yellow one....kekeke ;p  I wouldn't say that it tasted like tom yum as the sourness was almost non-existent. 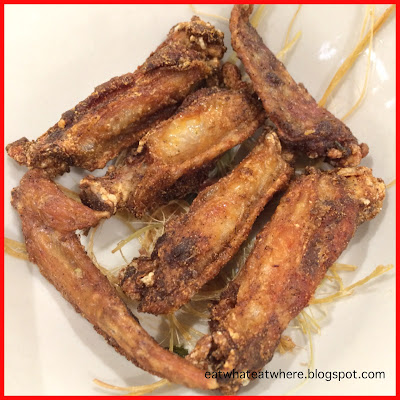 The Chicken Wings @ RM4.90 (wingette + wing tip) may look thin and dry but, let me assure you, they were not.  They turned out totally crispy, fragrant and an utter delight to eat =)  I could definitely smell and taste the lemongrass marinade in the wings which made them so fragrant and truly addictive.  I absolutely loved it...I think I can eat a few plates of these! 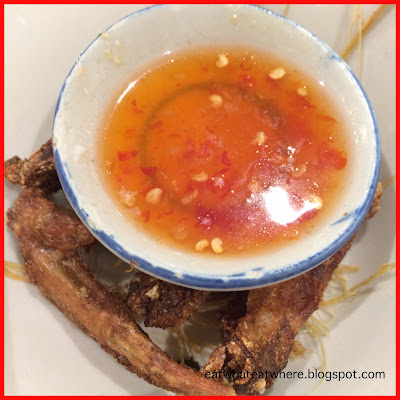 It was served with a typical Thai sweet-and-sour chilli sauce. 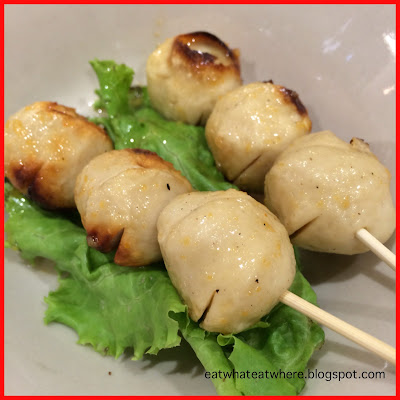 Another appetiser was the Grilled Chicken Meatballs @ RM4.90 for 2 sticks of 3.  The tender chicken meatballs on a stick had a sweet glaze on it, much like the taste of the sweet-and-sour sauce served with the chicken wings. 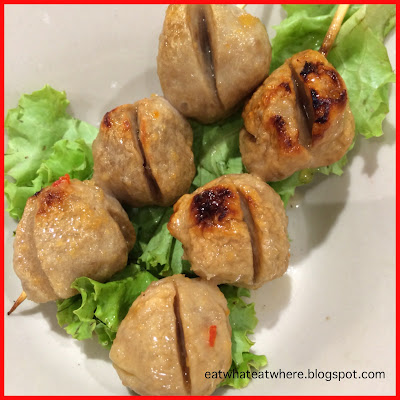 The Grilled Beef Meatballs @ RM5.90 were less tender than their chicken counterpart.  What else can you say...it's meatballs on a stick! 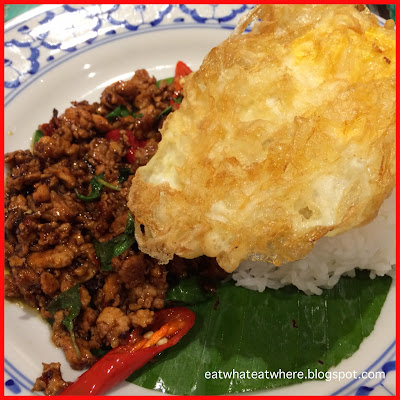 My spouse ordered the Kra-Pow Chicken Rice @ RM11.90 which was a new item on the menu.  It was made up of small chunks of chicken fried with fragrant basil leaves and fresh chillies although I found the dish to be over salted.  Even when eaten with rice, it was still too salty, so those with a low tolerance for salty food...beware! 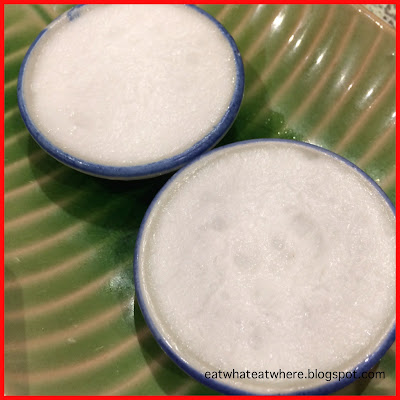 To end our meal, I ordered the "Ka Num Tuay" @ RM1 which was 2 pcs of chilled pandan-coconut dessert served in a small sauce dish.  This resembled the taste of our very own "kuih talam" (also a pandan and coconut layered dessert) or "tepung pelita" (another local kuih that's very similar to kuih talam but this one uses banana leaves as its vessel). 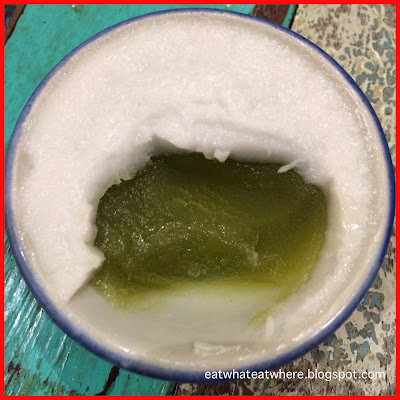 The sweet bottom green layer (which gets its fragrance from the juice extracted from the pandan leaves) is a good contrast to the top (slightly) salty layer of thick coconut cream.  There's no doubt that these snacks are a good way to end our meal on a sweet note.

We settled for these Thai drinks for the evening: 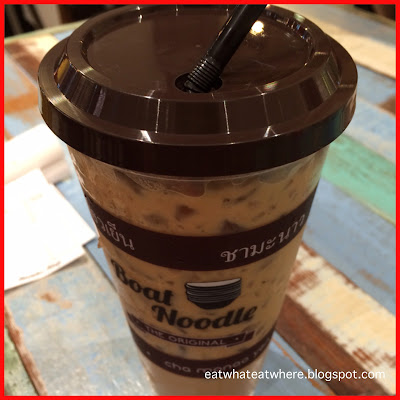 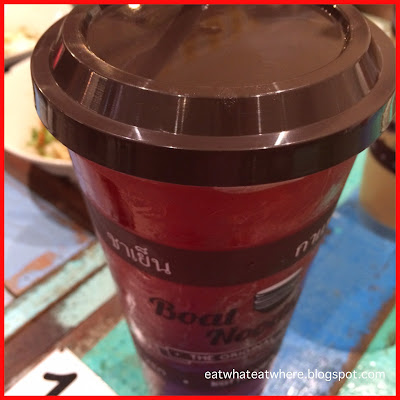 #Footnote:
Funny thing was, I received a media invite to do a review at their Empire Damansara branch (on 11 April) but invited reviews just ain't my thing!  I'm not into eating with a bunch of people I don't know (even though we're allowed to bring a +1).  Maybe if I get a one-on-one invite *wink wink*, I might just consider but I don't think I have to worry about that coz it's not gonna happen unless you're really 'famous'...kekeke)! ;D  Anyway, in the end, I still wanted to try boat noodles, so, this is still a paid post....I paid myself! :D :D

If you have yet to try this, go on and give it a try....at least once for the novelty!  But, if you're a big-eater who needs 10 bowls (or more) to fill you up, RM19 may not seem that worthwhile in the end.

For me, it's a place for snacking in between meals.  I wouldn't mind coming back here and snacking happily on the spinach tempura and chicken wings....with a tall glass of Thai Iced Coffee!  But, as far as the boat noodles go...once the novelty wears off, so will your desire!