Pictures of a sunshiny cafe (on eatdrinkkl's blog), with lots of greenery and natural sunlight, was enough to convince me to visit this latest addition to the ever growing food scene in this Jalan Kamunting neighbourhood. 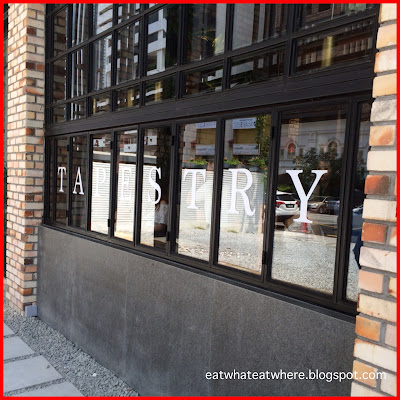 And so we did...arriving for lunch on a recent public holiday afternoon to Rise & Shine Tapestry @ Jalan Kamunting. 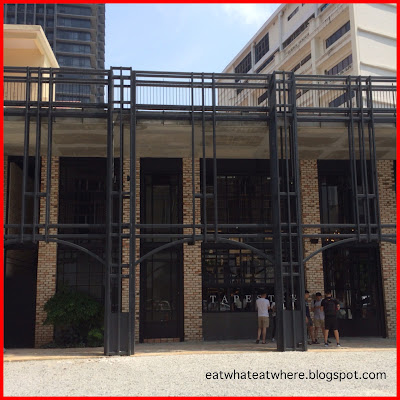 As I approached the cafe from the street, I was loving the modern facade already with its black metal frames and brick walls. 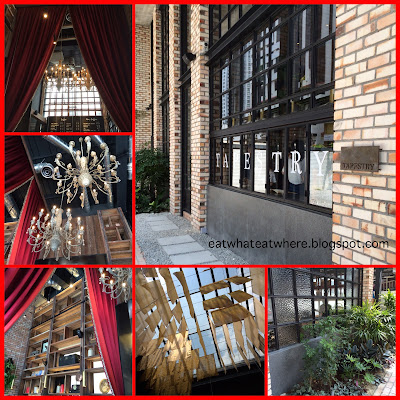 On entering, there was even more to love...from the light-transmitting skylight to the ceiling tapestry, high ceilings to the rustic chandelier, spots of greenery to the old-school decorative wall, bricked flooring and walls to the glass-encased kitchen, colourful tiled table tops to the tableware, I loved every bit of the ambience and interior here.

And then I was confronted with something I disliked....a queue! >_<  If I had come with family, I probably would have left looking at the queue.  But since I was with friends (and obviously some of them were late), the wait was at least bearable as time passes by much faster when you're busy gossiping chit-chatting away while waiting in line (it was an hour's wait for a table in the end).

Rise & Shine offers an all-day breakfast menu with a few extra additions for lunch from 11.45 am.  Prices are all within the wallet-friendly range starting from as low as RM16 for free range eggs on house-made sourdough to the most expensive dish of fish & chips at RM35 (with most dishes in the affordable RM20 - RM30 range). 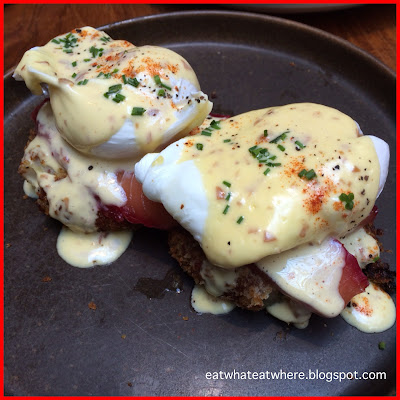 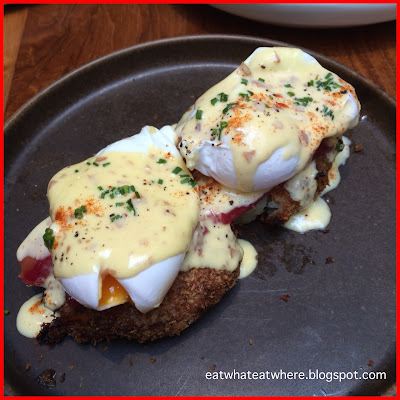 The reddish hue of the beetroot-cured salmon was visually appealing.  The hollandaise sauce was tasty and light from the specks of bunga kantan in the sauce. 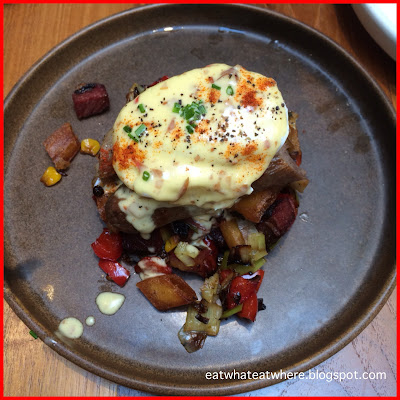 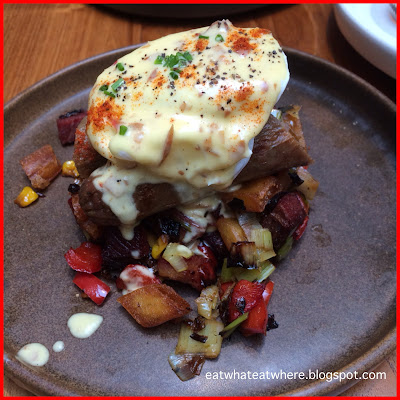 The salt beef cubes (a salt-cured beef product sometimes referred to as corned beef but nothing like the tinned stuff) were to die for...so deliciously fragrant and immensely tasty!  If there was anything else as delicious, it would be the diced potatoes that were fried to perfection to yield an excellent crisp exterior while the inside stayed soft and fluffy. ^o^ 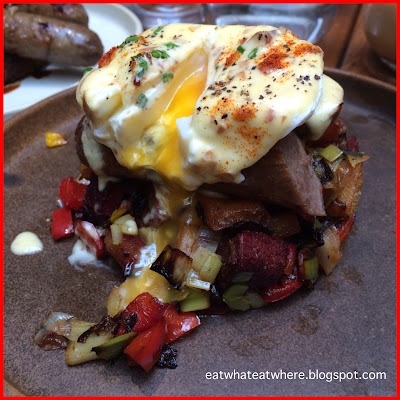 Now who wouldn't want a smoky, charred finish on the corn, leeks and peppers to make it extra delicious. Ok, there was a banger in there somewhere too.  And then they topped it off with a lusciously runny poached egg.  There's nothing more I could ask for.  My favourite dish of the day...and the best potato hash I've had. 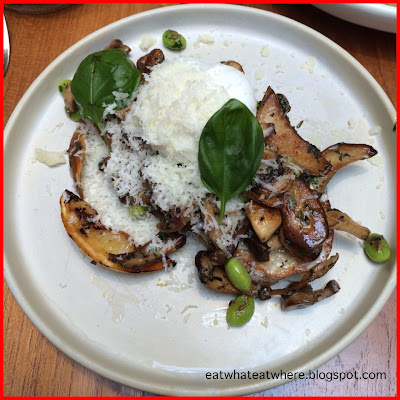 And if you like something on toast, go for the eggs (done any way), mushrooms or avocado.  We decided to go with Field of Mushrooms @ RM25 as the menu said it came with grilled asparagus, fried plantains and poached egg on house-made sourdough bread. 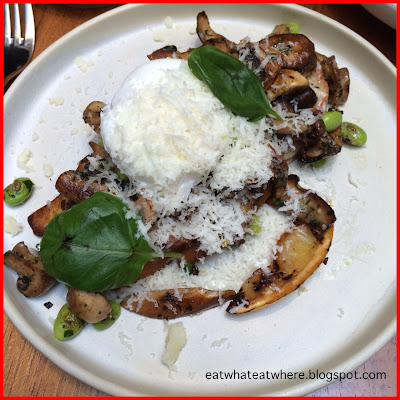 But when the dish arrived, some of the ingredients were not the ones listed in the menu....there were no asparagus or plantains.  In its place, instead, were edamame, some spinach leaves and freshly grated cheese.  Of course there were mushrooms (two types, eryngii & button) that were perfectly seared to the right sumptuousness of succulent and juicy.  There was a piece of charred lemon in there too. 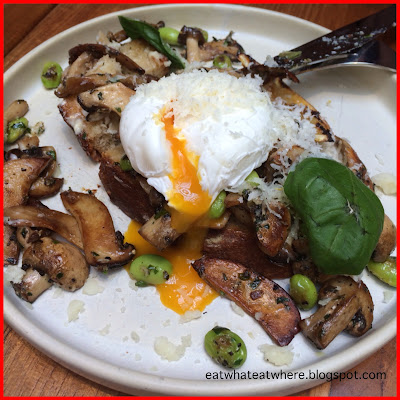 Again, a meticulously executed oozy egg was icing on the cake!  It was still a good dish with substituted ingredients, one that I enjoyed, even though I wish they had told us about the change (since it differed from the menu) to let us decide if we'd still want the dish (coz it was the description of grilled asparagus and fried plantains that first got me excited about the dish).  Now it makes me wonder just how it would have tasted with the originally intended ingredients. 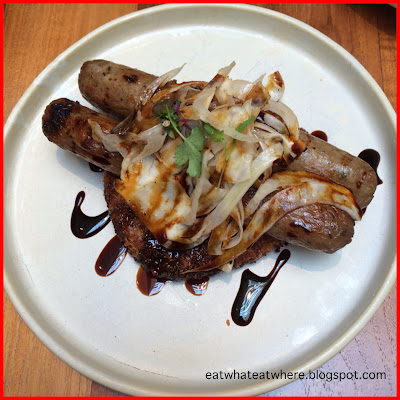 The only item from their lunch menu that we tried was the Bangers & Squeak @ RM32 which consisted of bangers (aka sausages) served with bubble & squeak and a side of fennel salad and finished with a garlic & soy demi glace.  The sausages, not sure if they were house-made, they looked too uniformly shaped to me (but if they were indeed kitchen-made, then congratulations are in order for the person who made them, and if they weren't, congrats too to the buyer who sourced them..haha!).  They were certainly of good quality...and tasty too. 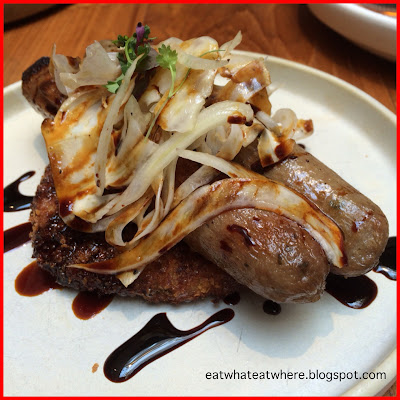 The bubble & squeak (which was also present in the earlier eggs benedict dish) is something like a potato cake, traditionally made with mainly potatoes and cabbage (though you can add other vegetables and I detected carrots and onions in this one).  The thinly sliced fennel added that perfect fresh, crisp element to the dish...I relished it.  We don't see cafes using fennel as the vegetable component of a dish often enough, well they should, coz they're just so scrumptious. 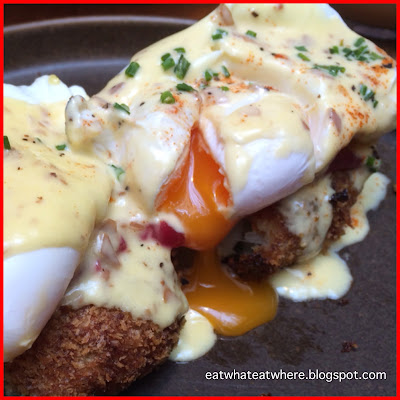 The sight of the deep orange yolks tells us these are from free-roaming happy hens.  All the poached eggs we had were perfectly cooked...and they were done freehand-style, the style that I love the most. ^.^ 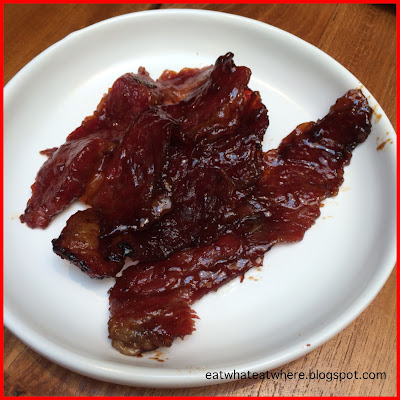 Since we did not order any dish that was paired with Sarsi-glazed beef bacon, we were curious enough to find out what it tastes like, so we ordered an additional side of Sarsi-glazed Beef Bacon @ RM15 (about 4 slices). It's a bit similar to candied bacon, almost bak kwa-like, only chewier, and the sweetness of the Sarsi comes through distinctively. 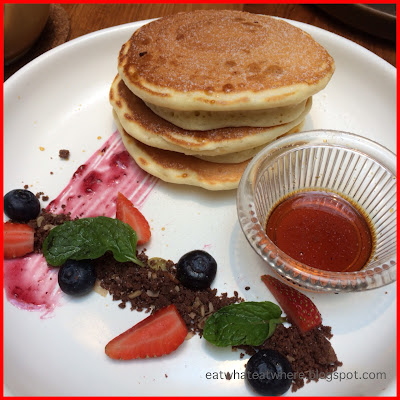 We went with something sweet for our final pick, Pancakes @ RM25, a stack of three with strawberry compote, fresh berries (strawberries and blueberries) and edible chocolate soil served with an Earl Grey gula melaka and freshened with some mint leaves. 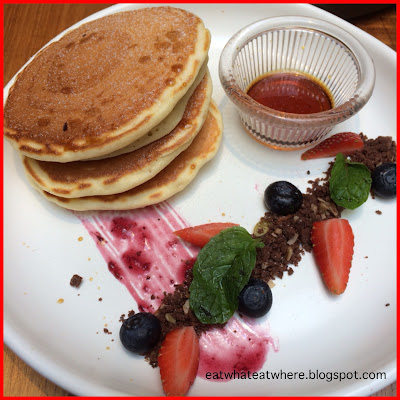 We treated this as dessert and ate it last after we were done with all the other dishes and by then the pancakes were cold.  Still, they were nice and fluffy (and, best of all, they weren't sweet on their own), so we certainly wouldn't have minded more gula melaka syrup and strawberry compote to provide added sweetness to the pancakes.

The portions here aren't very big, so a group of 4 - 5 could easily handle an extra dish (or two) for sharing but I'm not complaining as I unequivocally prefer quality over quantity. 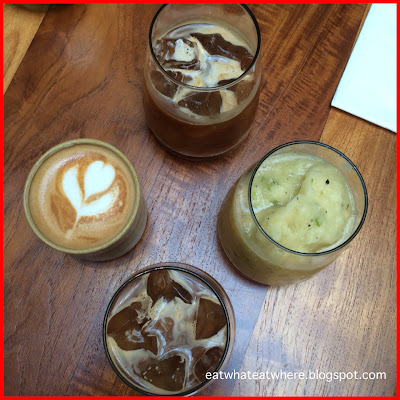 The iced coffees here were incredible...Iced Latte @ RM14 and Iced Hazelnut Latte & Iced Caramel Latte @ RM16....great for our scorching weather too.  Loved them all (but if I had to choose just one, it'd be the hazelnut latte). ^_^ 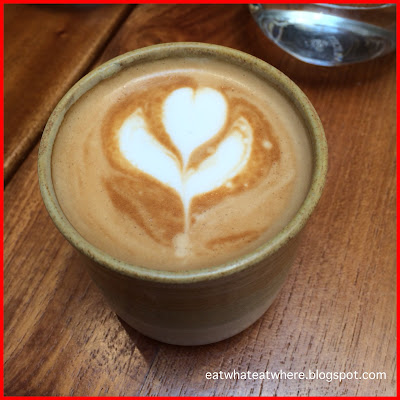 Hot Cappuccino @ RM13.  Just so you know, the coffees served here are from Eight Ounce Coffee...so, if you love their coffees, you'll undoubtedly love this one too. 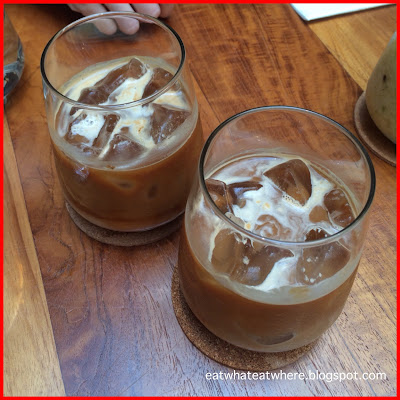 Not only am I loving the coffees, I'm also loving the shape of the coffee glasses.  It's shaped like a wine glass but without the stem (though visibly you can't see the shape from the angle of my shot).  Oh, did I mention I loved their plates too. :)  If there was one tiny thing I could do with...it's a stirrer since no plastic straws are provided (not that I wanted one).  We had to use one of the cutlery (be it spoon, fork or knife) to stir our coffees.  They should look into getting metal stirrers or those long-stemmed spoons (which would come in handy with the ice-blended juices as well). 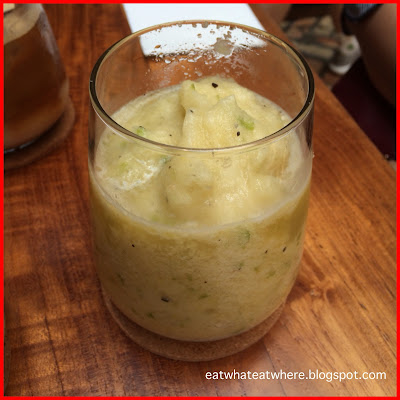 I was expecting our choice of Tropical @ RM13, a blend of zesty flavours of passion fruit, pineapple and green apple, to be a fruit juice but it turned out to be an ice-blended concoction which we had to drink with a spoon.  Notwithstanding, it was still a thirst quenching sensation that you'd want in your hands especially if you happen to be seated under the sky roof with the sunlight streaming down on a hot afternoon.

Service was amazing too....the servers were always friendly and attentive even though they had to deal with such a massive crowd.  I noticed one particular cute-looking server (the same one seen holding the door in their FB page ^_*) wasn't one bit frazzled (and was always smiling) even when he had to weave through a crowd of people to get his drinks from the coffee bar to his customers.  P/S: One of the servers told me that this is their first dining concept to be launched and that another restaurant is in the pipeline (somewhere in Damansara was mentioned, if I heard correctly).  Well, if it's anything like this one, I'm stoked.

The last time I remember having to queue like that was at Breakfast Thieves.  In the end, the food was worth the wait.  But for those who detest queuing, give it a couple of months for the crowd to be more manageable but if they can maintain the quality of the ingredients and cooking standards...and, of course, the absolutely delicious outcome of the food, it might NOT happen anytime soon...haha! ;D

I've not been this excited since Ra-Ft.  When a place hits all the right buttons for me...the ambience, the food, the service...I knew instinctively (just like Ra-Ft) that it deserves its place among my most favoured cafes.

You'll want to Rise & Shine to this.....the earlier, the better, if you don't wish to queue...then again, I can't promise you that won't happen either even if you're early! ^_~