I've always enjoyed eating Claypot Chicken Rice (my husband loves it) though I've also been weary of rumours (unfounded or not) that eating directly from a claypot cooked over charcoal flame or a gas burner isn't all that good for us. 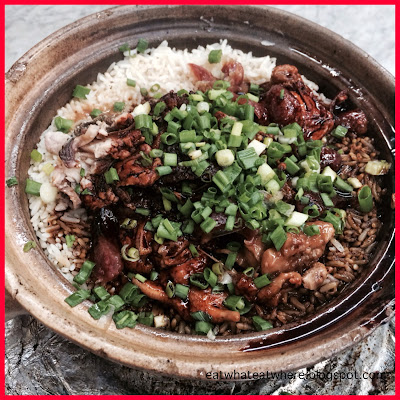 But, alas, if there's a bigger turn off for me (when it comes to claypot chicken rice) is the smell of the claypot infusing into the rice that I get from some stalls (have you experienced that before or is my sense of smell and taste just too sensitive?).  It could either be due to the fact that the claypots aren't replaced promptly enough or not thoroughly cleaned to have that lingering smell.  Some of claypots have been so overused to the point that the hawkers use wires to bind over the cracks just to extend their usable life.  Mind you, I have eliminated claypot chicken rice stalls based on this reason alone...haha! :D 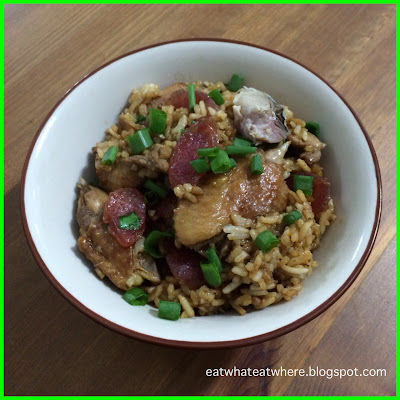 So, if I want to eat a healthier version, I guess I'll have to make it myself.  It seems simple enough since just three ingredients (besides rice) are needed.  Of course I knew I had to give up that crusty rice (at the bottom of the claypot) as you just can't achieve that with a rice cooker.  So, here's my home version of Claypot Chicken Rice (minus the claypot)...and minus the crusty bottom! ;) 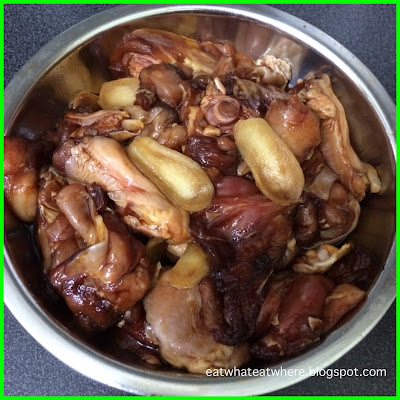 You start by marinating about 450g of chicken pieces (I used choi yin kai or village chicken, skin removed) with thick dark soy (1 tsp), sweet soy (1 tsp), light soy (2 tbsp) and a dash of sesame oil.  If the marinade looks too dark, don't worry, it won't be later coz you'll be mixing that in with quite a lot of rice.  I normally marinate the chicken in the morning (and leave it in the fridge) if I intend to cook it for lunch. 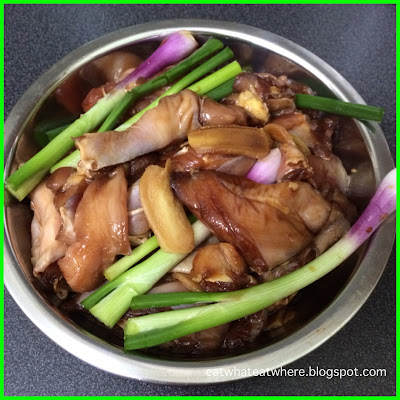 For my home cooked version, I like to add a few slices of ginger and long stems of spring onions (which you can fish out later) for a bit more aromatics.  Sometimes I'd even add fried garlic or shallots if I have them. 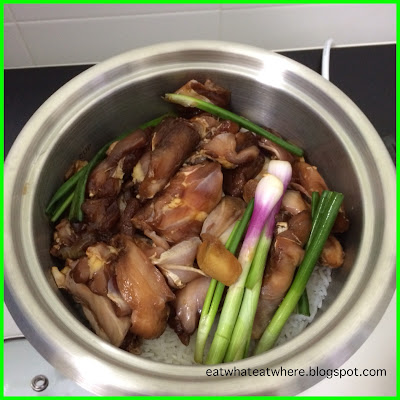 Wash and cook 1 1/2 cups of rice and put it into the rice cooker to cook with just a tad less water than usual (as they'll be some liquid from the chicken and marinade).  I put in the marinated chicken pieces once I see the water almost fully absorbed by the rice grains.  If you missed that 'window of opportunity' and the rice has finished cooking, you can still put in the chicken at that point, not a problem. 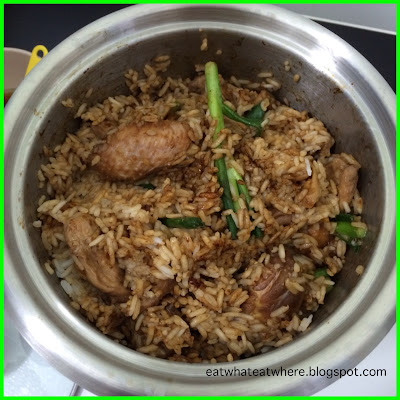 Give it a really good stir to make sure your rice is well incorporated with the dark sauce from the chicken. This is also the window where you can tweak with a bit more thick dark soy if you find the rice needs a darker colour (mine needed another 1/2 tsp).   If the rice has finished cooking, press the cooker on again for a second time to ensure the chicken cooks properly (as we wouldn't want under-cooked chicken now, would we?). 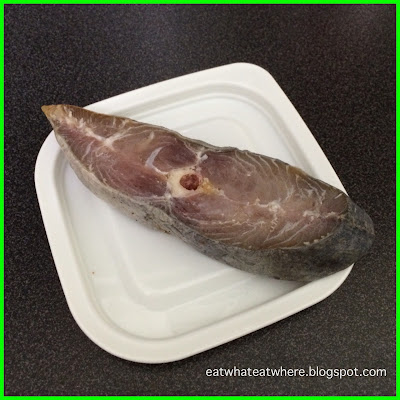 The key to a good claypot chicken rice is to complement the flavours with a piece of good quality salted fish (like mui heong) that's fragrant besides being just salty.  Most of the salted fish used by claypot chicken rice stalls are usually of a low quality and doesn't have that requisite fragrance.  I'm not sure how good a quality this piece of salted fish was but it cost me RM8 for this slice (and I used half of it though it could certainly do with the entire piece). 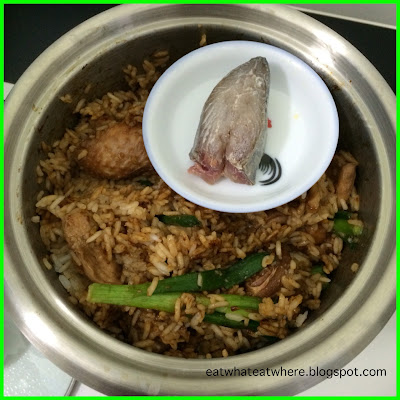 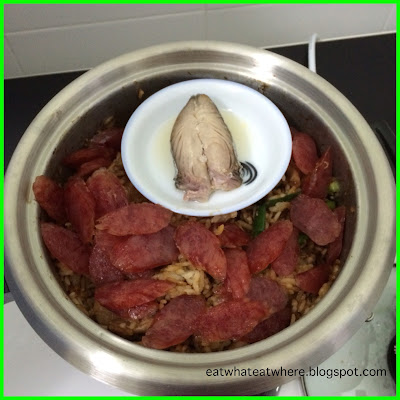 When the chicken pieces are almost done (that's when the rice cooker finishes cooking for the second time which is about 10 minutes later in the case of my rice cooker), add (generous) slices of lap cheong (from 1 1/2 strips of Chinese dried sausage) and press the rice cooker on again (for the third time).  This is the other key to a good claypot chicken rice...lap cheong.  There was a time when I tapau-ed this but, to my horror when I opened it at home, I got someone's else order instead without lap cheong and it just wasn't the same.  I know of some people who dislike Chinese waxed sausages but I feel it's really needed to bring out that bit of fragrance and oil to the claypot chicken rice.  I suppose you could add some other waxed meat or liver sausages if you really wanted to. 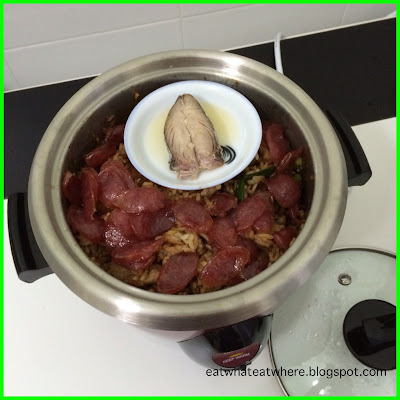 Once the rice cooker finishes cooking for the third time, remove the spring onion stalks (and ginger slices if you can find them) as well as the salted fish.  Give it a final taste test and adjust the seasoning, if needed. Add more light soy if you find the rice not salty enough (it probably could do with another tablespoon, perhaps even two, but I refrained as I try to eat less salty food at home when I can).  Plus you also have to take into account the mashed salted fish that will be going into the rice later. 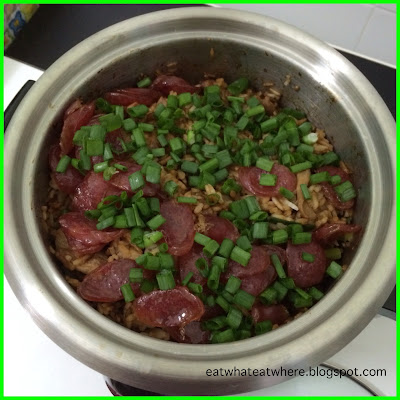 Finally, sprinkle in the chopped spring onions at the very last minute, finish with a dash of Chinese rice wine (optional but that's what I saw some hawkers did), give it a good stir and you're ready to serve. 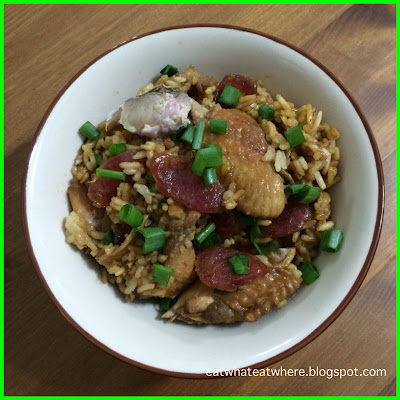 Here's my home-cooked version of Claypot Chicken Rice (minus the claypot)...and minus the offensive claypot smell (that only I can detect?)....haha! ^_^ 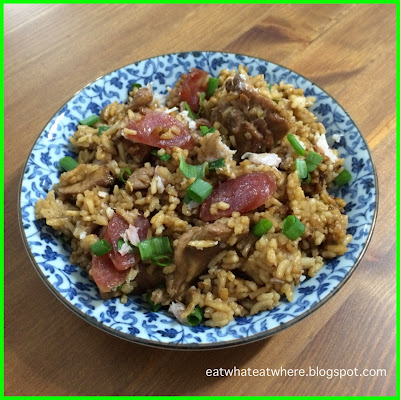 The best thing about a home-cooked version is that it's definitely no where near as oily as the ones we order outside.  That could be due to the less fatty nature of choy yin kai and because I removed the skin or perhaps the hawkers added oil in the marination of the chicken. 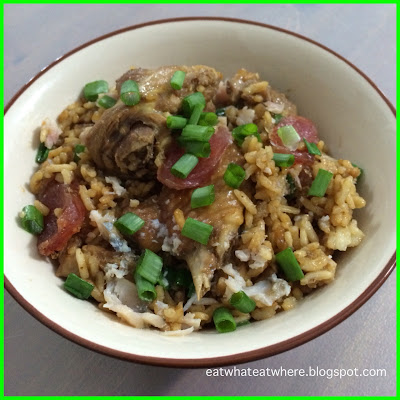 My bone of contention with ordered claypot chicken rice from hawkers has always been that it doesn't contain enough lap cheong to give the rice the fragrance it needs.  It's so coz good quality Chinese waxed sausages are expensive...and that's why they allow you to add more at a price (and my spouse will always want more). 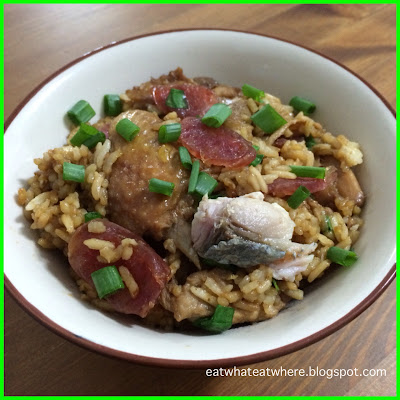 Then the other thing my spouse would complain of not having enough is salted fish (sometimes you can't even see it if they've already been mixed in together with the rice).  That's why he'll always request to add extras and then not even getting good quality ones.  You can choose to serve your salted fish whole (in a piece that you can see!) or smashed and mixed into the rice. 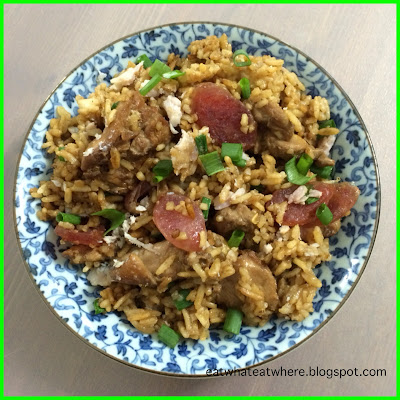 Great eaten with some sliced red chillies or fiery cili api....or, better still, like how I would eat it at claypot chicken rice stalls, with a plate of oyster sauce sang choy (lettuce) and a bowl of double-boiled soup :) 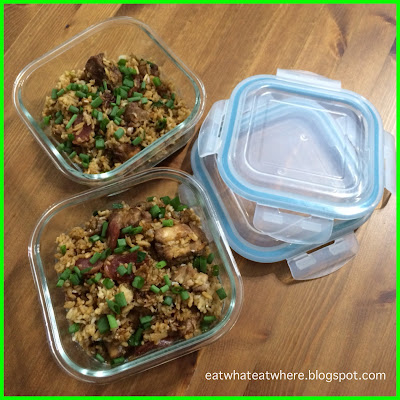 If you can freeze rice, you can certainly freeze claypot chicken rice!  So, if there are extra servings or leftovers, freeze them to be eaten on another day.  When scooping up the leftovers, I found a bit of crusty rice at the bottom...yes, that can happen if you're not using a non-stick but a stainless steel inner pot (like mine). 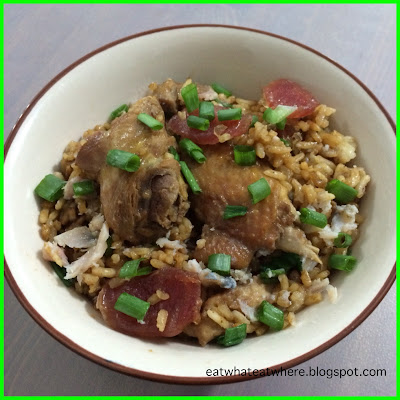 In the end, I won't claim that this home-cooked claypot chicken rice is as good as the ones I eat at claypot chicken rice specialists but a version that you can easily make at home as it's one of those fast to cook, good to eat, one pot wonders! ^.^  And if you're not a fussy pot about the overall flavour, you can certainly take it literally and make it a one pot wonder by chucking everything in at one go into your rice cooker.