It's the 8th day of the Lunar New Year!  So, have you been indulging (maybe even over-indulging) in glorious food over this festive period?  I'm sure you have.  I know, I know...it's difficult to resist all those tempting CNY set menus being offered by various hotels and restaurants. 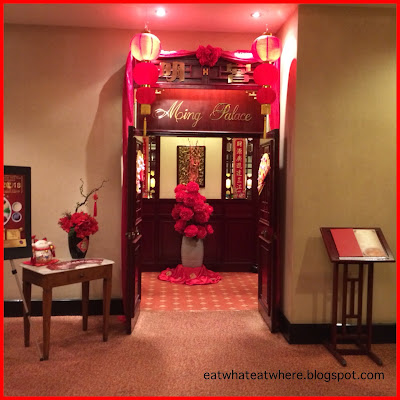 More so when many would want to "loh sang" to ensure that they usher in prosperity in the coming year.  This year, we had one of these set menus at Ming Palace @ Corus Hotel again (just like the year before...you can read it here). 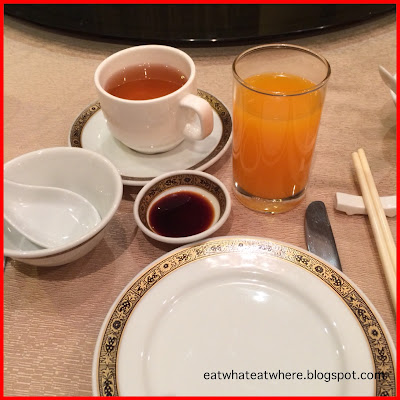 The CNY set menus start from RM1,238 nett (still one of the more affordably-priced menus by a hotel restaurant) and we opted for the Good Fortune Menu @ RM1,438 nett (for a table of 10 pax, we added one more pax) with a complimentary bottle of red wine or chilled orange juice. 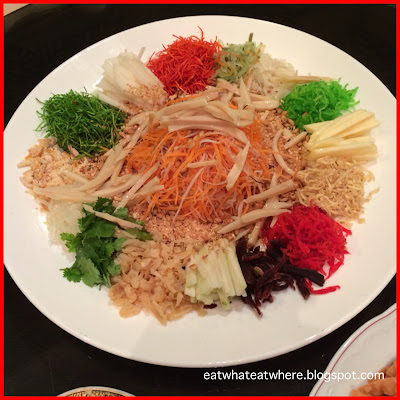 As with any CNY menu, it always starts with the iconic must-have dish of "yee sang" and we had the Prosperous Jade Shellfish with Pine Seeds. 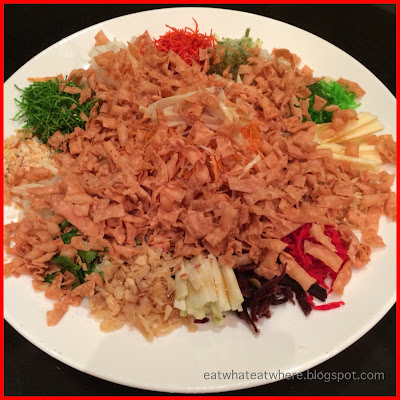 And any good yee sang, of course, needs plenty of crispy crackers! ;) 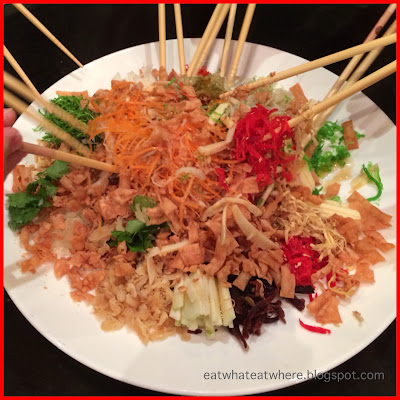 After some oil and plum sauce were added into the mix, it was time for the customary tossing of yee sang to wishes of prosperity, good luck and health for the year ahead. 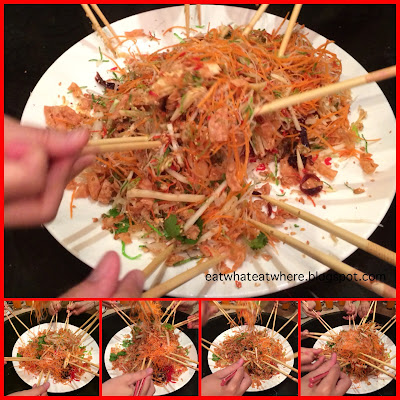 For me, I like to think that the tossing is just a way to ensure that everything is well mixed together to get that perfect bite...hihihi! :D 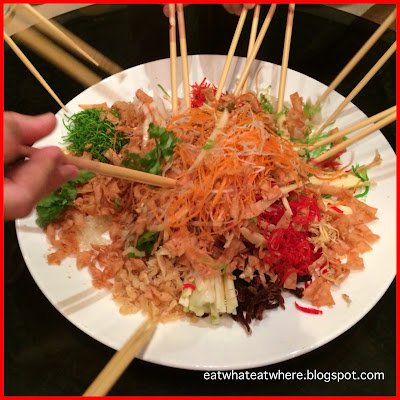 The shellfish tasted exactly like abalone with a not-too-sweet sauce (we poured in only half, I think it needed more as it was a rather huge plate of yee sang) for a refreshing start to the meal. 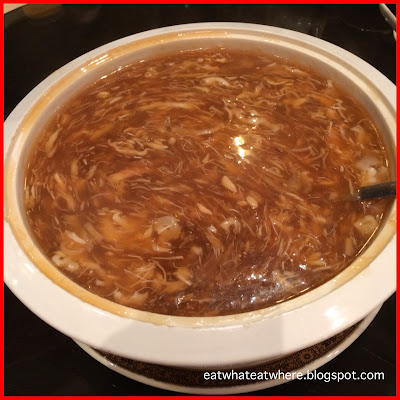 A soup dish would usually follow after the yee sang platter (or a traditional Four Seasons Platter in the case of a Chinese wedding meal) and I'm happy to see that there are now more restaurants putting out non-sharkfin based soups.  The Braised Seafood Chowder with Three Treasures filled with dried scallops, crab meat and sea cucumber incidentally turned out to be the same soup which we upgraded to last year.  It tasted similar to any shark's fin soup, just minus the shark's fin. ^_* 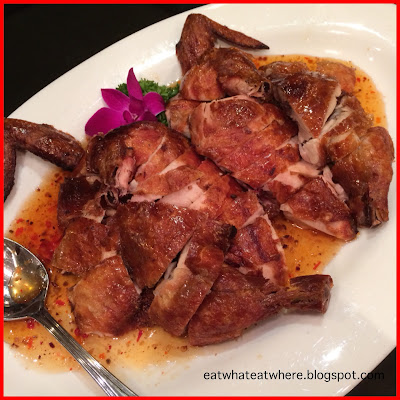 The Thai-Style Crispy Roast Chicken that came next was one of my favourite dishes of the night.  The crispy skin and tender meat coupled with a slightly sweetish-tangy-spicy sauce was a great combination to savour. ^.^ 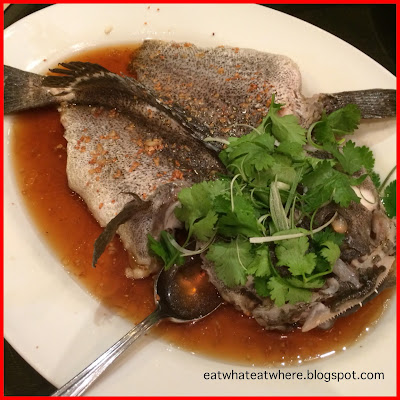 Steamed fish is a dish I always look forward to in any CNY set meal and the Steamed Green Sea Grouper Fish with Supreme Soya Sauce delivered in every aspect.  I just can't quite replicate steamed fish at home to taste like the good ones I eat in restaurants which I think is down to 3 factors...the freshness of the fish (we just can't get fish that fresh from our markets), the deliciousness of the supreme soya sauce mix (the brands of soya sauce we use at home just aren't superior enough) and the perfect timing of the steaming process. 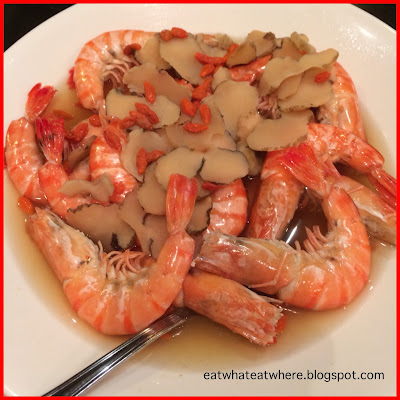 Of course, prawns are a must-have in any lunar new year table.  And, for a change, we had Poached Prawns with Chinese Herbs with a pleasurable and aromatic herbal-tasting broth.  For this dish to work, the prawns had to be super fresh with sweet tasting flesh (as they can't hide under the guise of a robust tasting sauce)...and they certainly were fresh and succulent (you can see just how fresh they were from their well-attached heads and plump bodies). 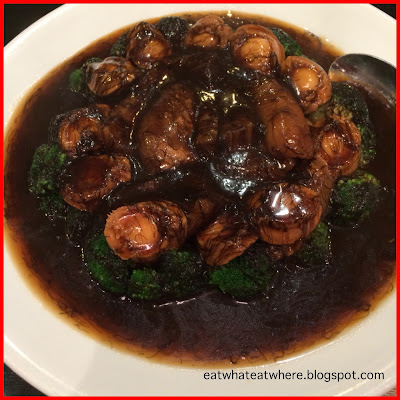 Next was a decadent dish with auspicious ingredients, Braised Broccoli with Abalone, Sea Cucumber, Dried Oysters & Fatt Choy in a dark, superior stock with "tau kan" (fresh bean curd blocks).  The gelatinous texture of the sea cucumber was super soft (I don't really fancy sea cucumber though, just a personal preference) but the abalone could be a tad more tender. 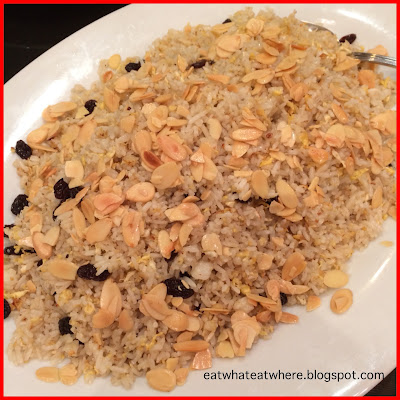 For the carbs portion of this set dinner, the Fried Rice with Almonds & Raisins was surprisingly tasty, one of the better fried rice I've had.  The rice grains were well fried with a lovely crisp texture and an added crunch from the toasted almond slices and some sweetness from the dark raisins made it even tastier.  I'd usually be quite full by this time but couldn't resist a second helping of this very appetising fried rice. 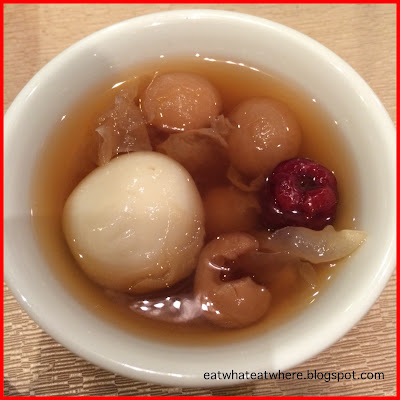 To finish our meal with a sweet ending, the dessert was Sweetened White Fungus and Red Dates with Rice Dumpling, served hot.  I personally would have preferred something cold for dessert but the rice ball with a black sesame filling was very nice though. 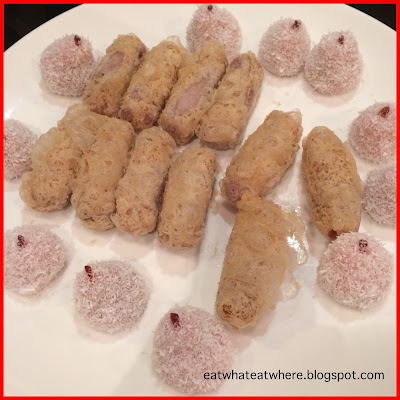 This was paired with Duet Sweet Dainties of Fried Ninko & Glutinous Ball with Lotus Paste.  The fried ninko was still as good as I remembered it to be...and still the best ninko I've had! ^o^  That's because the batter encasing the yam and ninko is one of the crispiest, fluffiest and lightest batter I've come across (similar to those great yam puffs I've had).  The coconut flakes encrusted glutinous ball (shaped more like a tiny pear) with a not-too-sweet lotus paste inside was delightful as well.

With an affordably-priced CNY set menu from as low as RM1,238, this place offers value-for-money sets for a hotel-based restaurant in the city to host one of your CNY dinners.

The stand-out dishes for me were the zesty yet fragrant roast chicken, scrumptious fried rice and absolutely crispy ninko with fluffy yam.

Still one of our go-to places for CNY feasts for its value and service that don't disappoint! ^_~