I've heard about this porky place since they first opened in Publika a couple of years back but haven't gotten round to visiting them until now.  I recently had dinner at their newer outlet, S.Wine @ Tropicana City Mall (opened in the later part of 2015), on a Saturday evening. 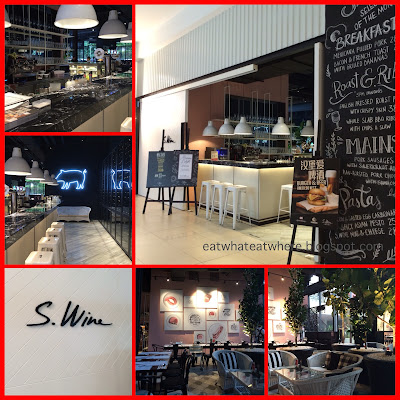 From the name, you know what it's all about here....which means you'll find oink featured in almost every dish on the menu.  For some, it'll be pure pork bliss...for others, don't venture into swine territory if you're looking for 'someone' other than Mr Piggy! ;D 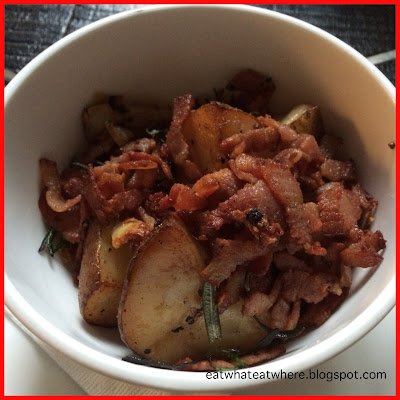 Our first starter of the evening (for sharing) was the Roasted Potatoes with Bacon @ RM15 from their Grazing menu.  The bowl was filled with russet potatoes (with skins on) and bite-sized pork bacon roasted with garlic and rosemary. 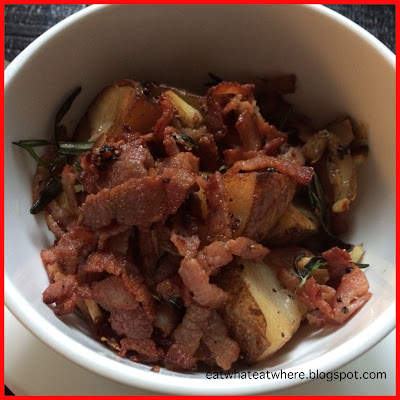 As you can see, the bacon doesn't come in small bits but good bite-sized portions that were incredibly crisp and fragrant.  The flavour of rosemary through the roasted potatoes was up front and centre (more so if you consume the herb).  And if you chance upon the soft, mushy roasted garlic, what can I say, it's sweet and mellow. 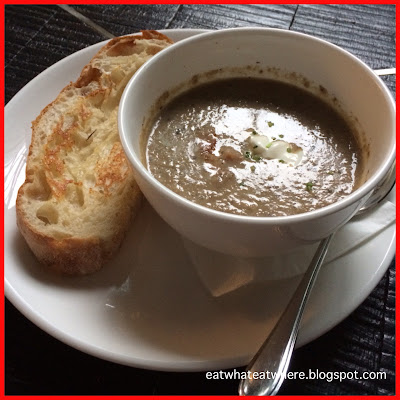 If you've been following my blog for some time, you'll know that I absolutely adore mushrooms, so Mushroom Soup with Bacon @ RM18 is a common order for me.  But, then again, the decision was easy since there's only one other soup on the menu and that is Pea & Ham Soup @ RM15. 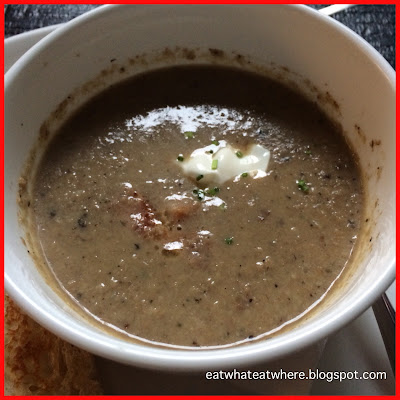 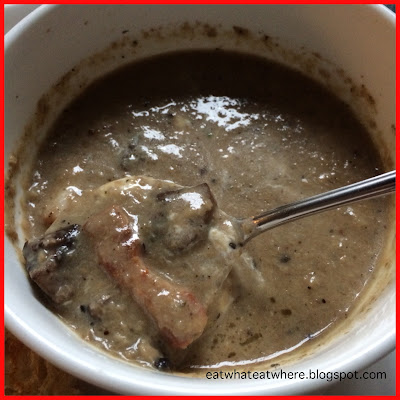 The nicely thick and creamy soup was packed with tons of mushroom flavour and the chunky bites of mushroom and bacon made it even better. 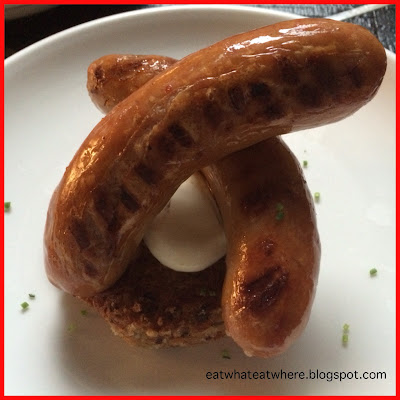 For our mains, I went with the Pork Sausages with Sauerkraut Rosti @ RM28 described as grilled Italian sausages (I so like) served with sauerkraut rosti (I should have known better) and a dollop of sour cream. 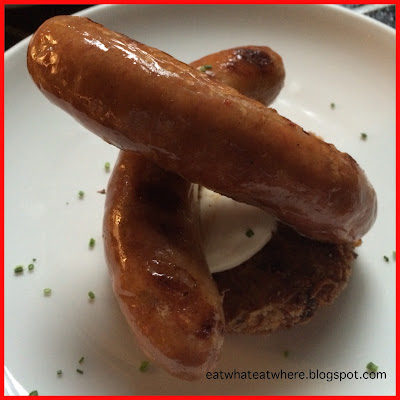 I had a taste of the sour cream....yuck.....and proceeded to quickly scrape it off the rosti.  I can safely say (without a doubt) that I hate sour cream! >.<  On hindsight, I didn't need to scrape the sour cream off the rosti at all coz I didn't like the sauerkraut either.  What was I thinking!  What made me think that sauerkraut rosti could be any different as I've never liked sauerkraut (which I've eaten with German pork knuckles before). 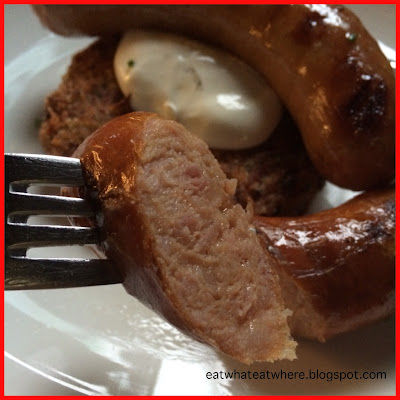 That meant I was left with only the sausages as redemption.  Luckily, the sausages were the main star of the plate and they were fragrant and savoury (maybe just a tad too savoury as I took more bites).  The dish was crying out for some freshness (some greens) to cut through the saltiness.  Ironically, the receipt mentioned the dish as Arugula Sausage Rosti...so, my guess was that it used to be served with arugula (which I think is a mistake to take off...but then arugula is pretty expensive these days). 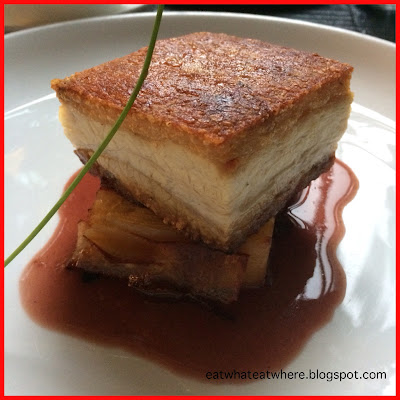 Our other main was the English Pressed Roast Pork with Crispy Skin @ RM38...what a beauty!  Visually stunning, this slow-roasted pressed pork belly was served with bacon boulangere.  A boulangere is simply cooked sliced onions (or potatoes) in a casserole.  This boulangere tasted of very thinly sliced potatoes (with some bacon slices in between, can't remember if there were any onions in the mix).  It was good....the boulangere, I mean ;) 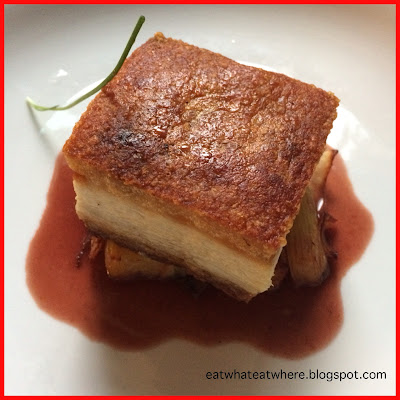 We all know that a crackling that doesn't crackle isn't a cracker....but, no fears, this roast pork skin was absolutely crackling!  The skin was so crispy, it blew me away.  Top marks for the skin! 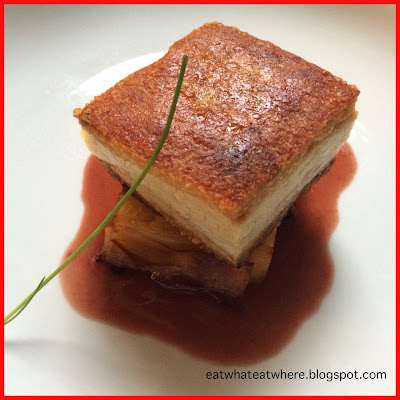 As for the roast pork, it was (of course) too fatty for me (obviously this wasn't my selection) but for lovers of fatty meat.  The texture of this one was incredibly soft (probably done sous vide) and there was no doubt that it was disintegrate-in-your-mouth tender.  The meat itself was rather bland in taste, so don't expect it to have the kind of savoury seasoning like our local "siew yoke" (roast pork).  Again, as you can see, it was devoid of any greens.  I think topping it off with some wild rocket or radish slices to offer some bitterness and freshness to the dish would have been welcomed.  Luckily, there was some red wine sauce to cut through the fattiness a bit but there just wasn't enough of it.

Fattiness of the pork belly aside, it was the overly piggy taste that I couldn't get around.  This has happened to me quite a few times now in other porky places that it has become apparent to me that these English-style pork doesn't seem to sit well with me.  I wonder if anyone has the same taste experience as me or is it just my overly delicate taste buds?  My family also doesn't seem to have this problem....and I certainly don't have this problem with Iberico pork.  Hmmm...... 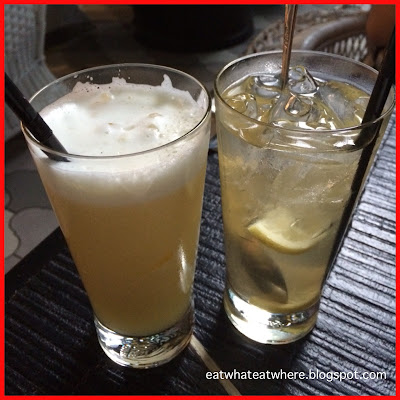 Iced Honey Lemon @ RM10
My Pineapple Juice @ RM12 (so good) offered a refreshing respite for me (from all the meat).

You can certainly wine and dine on swine here but I would strongly recommend some salads to go with your mains, otherwise the meal may end up to be too much meat in one sitting.  Having said that, all their salads also come with some kind of meat...be it pork belly, pork neck, bacon, sausage or chicken....and costing as much as a main (this was the very reason why I didn't want to order a salad in the first place).  And since I didn't order any salads, I'm also not sure if the salads or more heavy on meat or greens.

Although my dining experience didn't turn out all that well for me, I'm not going to pin the blame on the food or come to a conclusion about the food here.  I blame myself for possibly making the wrong choices where the dishes contained some ingredients that weren't to my liking to begin with.

But one thing I'm sure is the overly porky taste of the pork...at this place....and many other similar porky places that I'm weary of such places nowadays.  Am I destined not to enjoy this kind of pork?  But if you don't suffer from an overly piggy taste profile (like me), feel free to try out this place to see if you like it.  It's a place for people who loves meat, meat and more meat! ^_*