After our breakfast on Day 3, it was time to bid farewell to a fun motor treasure hunt, a leisure and enjoyable stay (with friends rather than flies) and a gratifying food hunt in Sitiawan.  We checked out of our hotel at around 11am with the intention of having lunch in Ipoh en route back to KL. 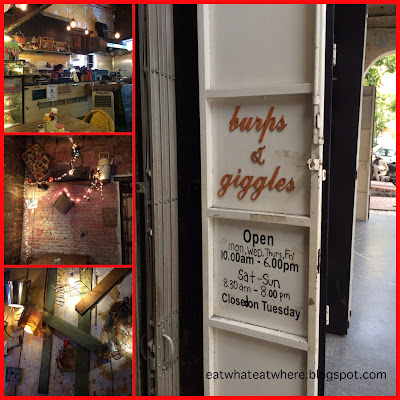 We reached Ipoh one and a half hours later....just in time for lunch, toilet break and to stretch our legs. That's why we targeted one of Julie Song's restaurants along Jalan Sultan Yussuf, Burps & Giggles @ Ipoh.

I was first introduced to Julie Song through the Discover Perak series (hosted by Xandria Ooi) on Astro's AFC. Julie is a well-known chef and restauranteur in Ipoh (think Indulgence Restaurant).  She then embarked on opening a series of smaller, quirky cafes, Burps & Giggles followed by Buku Tiga Lima and Missing Marbles. 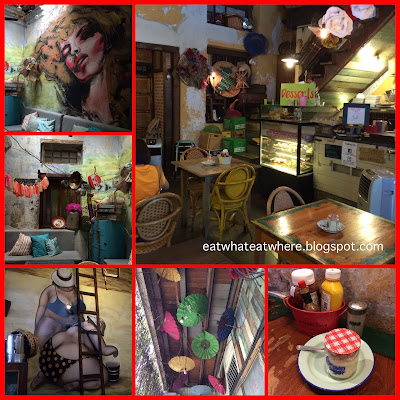 I have read blogs reviewing all her three restaurants (which are interlinked) and was privy to the fact that cross ordering was allowed.  Burps & Giggles offers more hearty fare like burgers and mains whilst Buku Tiga Lima dabbles in sweet and savoury crepes and Missing Marbles tantalises with an Asian menu.  But, to my surprise, when I stepped into Burps & Giggles, the server told me that they share one and the same menu.  But that was before I realised why. 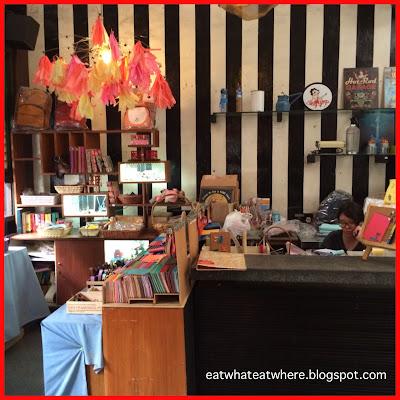 Crepes are no longer on the menu of Buku Tiga Lima nor in Burps & Giggles (if you want those, you have to visit Indulgence instead).  I'm not sure if Buku Tiga Lima is even around anymore...as they seem to be (at least) partially closed.  Taking its place is a little shop selling knick-knacks. 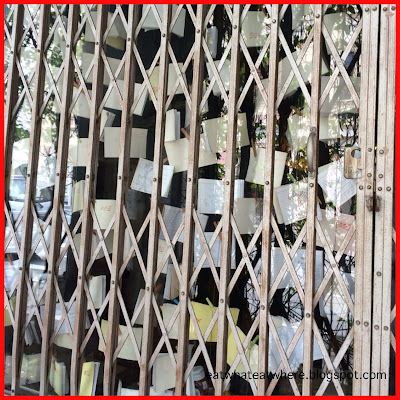 Only remnants are the 555 booklets that still hang in its 'semi-closed' premises. 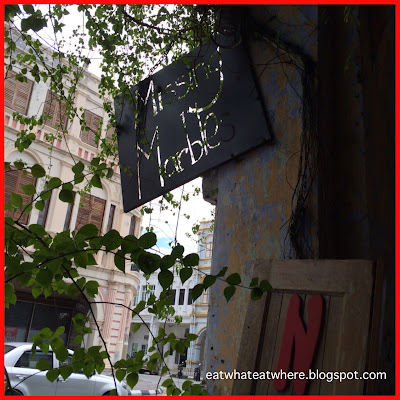 Also missing is......Missing Marbles.  Now this one is certainly not there anymore (only the sign is still there)! >_< 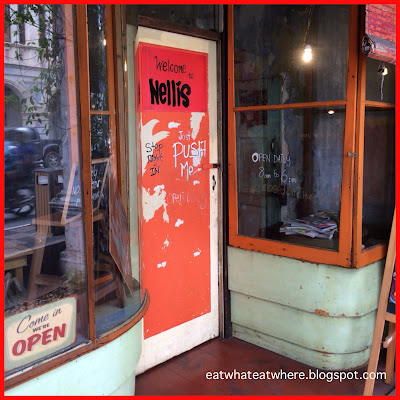 Taking over is a new place called Nellis (when we walked past)! 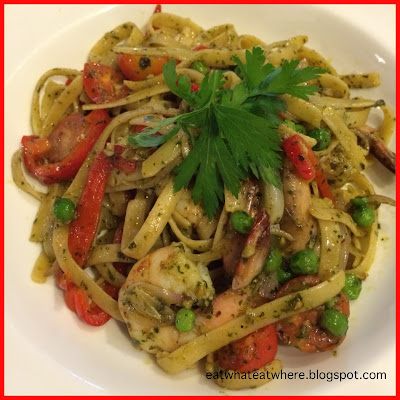 Coming back to Burps & Giggles, the cafe's menu is no longer what it used to be (as opposed to the extensive offerings I saw on blogs previously) and seems to cater generally to sandwiches, burgers and pastas now.  As we were still reeling from a rather full breakfast at Swiss-Garden Resort Damai Laut before we checked out, we decided to order just two dishes for sharing....the first of which was the Whacky Prawns Pasta @ RM19. 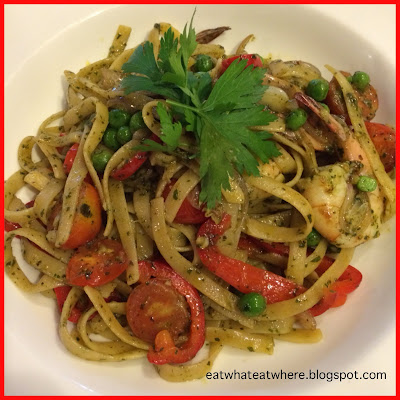 It's linguine filled with garlic butter prawns, red capsicum, cherry tomatoes and green peas in a light pesto sauce.  It was an ok pasta dish, nothing out of the ordinary.  There are two other pasta dishes on the menu, one with smoked chicken slices and the other with mushrooms and turkey ham. 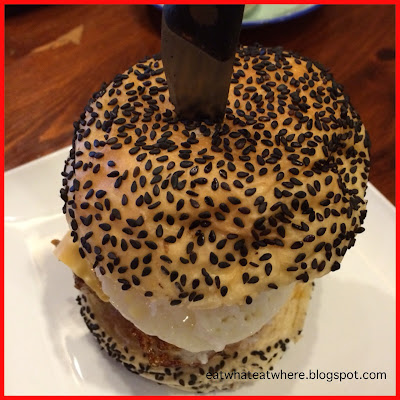 Our next order was the Jammy Burger also @ RM19 which featured an Angus patty, gorgonzola spread (which I asked to omit), cheddar cheese, onions, tomatoes and egg.  Everything was held together with a steak knife stabbed through the middle. 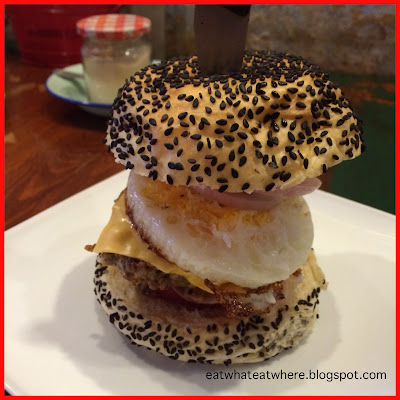 The sesame crusted bun was soft but the Angus patty was barely there...it was neither thick nor juicy! :(  And you can see that the egg is one with a fully cooked yolk. 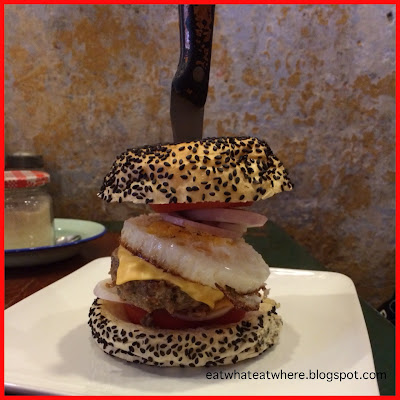 Finally, it was topped merely with thick slices of raw onions and tomatoes.  You can't help but think you can pretty much whip something similar at home (effortlessly).  There are just three other options for burgers here (with chicken, lamb or kimchi). 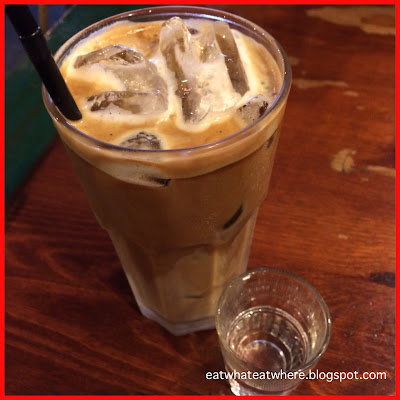 Luckily, the coffees were at least satisfying.  I had an Iced Latte @ RM12. 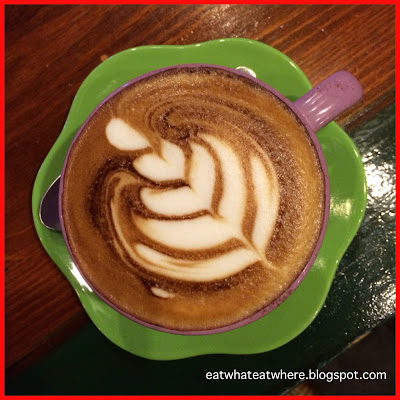 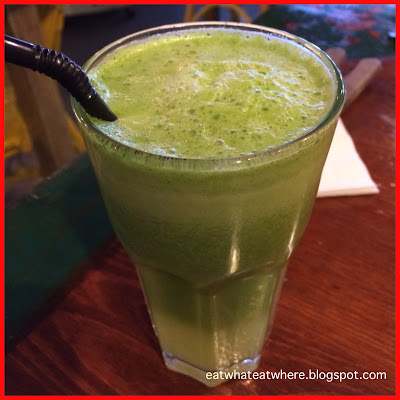 Another had the Go Green @ RM14, a detox drink of cucumber, lemon, ginger and whatnot, the combo of which didn't taste all that good...maybe she felt the need to detox after a gruelling 3 days/2 nights...kekeke! :D

You can't deny that the cafe has a rustic and quirky charm about it but it's a place you'd probably end up liking because of the decor and ambience more than the food.  When we were there on a (school holiday) Monday at peak lunch time, the place was pretty empty with just one other table occupied.  This is probably a far cry from its manic days when they first opened and were blazing through social media.  But still a decent place to hang out over a cuppa (and soak in the quirky interior) or to rest your legs (for north or southbound travellers) ^_*

I can't help but wonder why only Burps & Giggles remain to this day....I can only guess that having three cafes in the same row is stretching it a bit, especially so when customers dwindle down after the initial hoo-ha.

I suppose that charm and arty ambience can only get you so far but when all is done and dusted, it's the (consistently good) food that will keep you in the game in the long haul! ;)

Email ThisBlogThis!Share to TwitterShare to FacebookShare to Pinterest
Labels: Food: Beyond Klang Valley, Food: Western, Location: Out of Town