Seeking respite from the rain after church service on a Sunday morning, we decided to head to a mall for our breakfast.  Now that the euphoria of this one Michelin star dim sum restaurant (for their Hong Kong branch) has died down, along with its well documented long queues, we finally paid a visit to Tim Ho Wan @ Mid Valley, one and a half years after it first burst into the scene (now with other outlets in 1 Utama and Melaka)...better late than never, I suppose! ;) 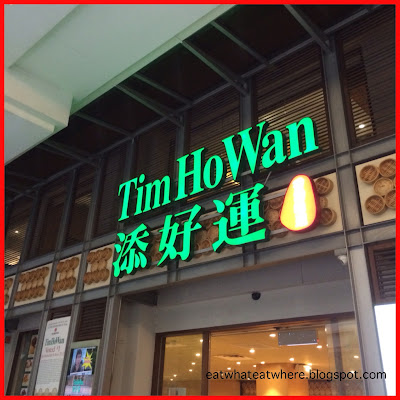 We were here at peak time on a weekend (a little after 10am).....and it was queue-free!  Although we got a table almost immediately, the restaurant was fully packed nonetheless...still raking in the customers (and money), I see! 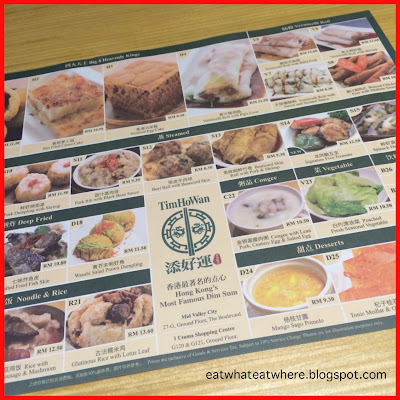 We were given a one-page menu and an order chit as we took our seats.  A quick glance at the menu and you'll see a rather limited menu of about 25 dim sum items on offer (four of which are vermicelli rolls or "chee cheong fun") though the order chit has a couple more items. 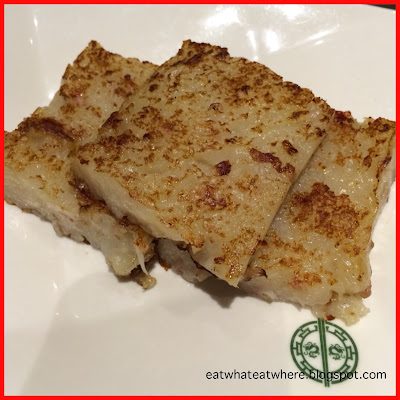 Of course, right at the top of the menu are their four signature dishes listed as the "Big 4 Heavenly Kings"...and a dining experience here wouldn't be the same without ordering these dishes, I reckon.  So, we started with the Pan-Fried Carrot Cake @ RM10.50 featuring 3 pieces of carrot or radish cake. 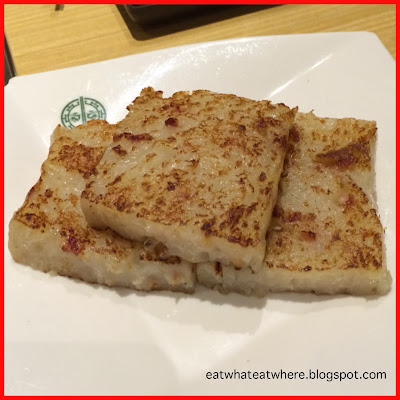 Filled with bits of ham (maybe it's "lap cheong") inside, these were very soft in texture (obviously more radish than flour) as they broke apart easily when picked up with chopsticks.  Let's say this one did not blow me away as I found the texture too soft for my liking (I read from a blog that the ratio is 6:1 of radish to flour).  I'm going to go out on a limb here to say I actually prefer one with a slightly higher flour ratio for a firmer texture.  It was also bland tasting, bordering on tasteless, and crying out for a pinch of salt :P  I also detected a hint of bitterness in the radish mixture that morning (maybe it's one-off?). 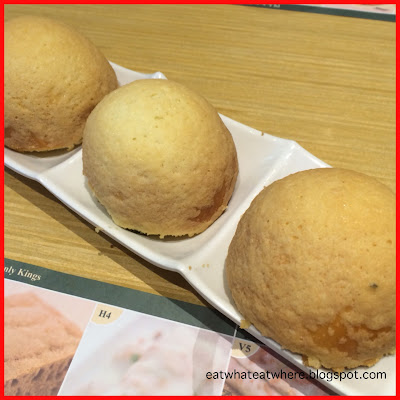 Their next 'must-have' 4 Heavenly Kings is their Baked Bun with BBQ Pork @ RM11.50 (for three).  This one is a unique take on the more common BBQ buns we'd find in most dim sum places.  Instead of being steamed, the buns are baked rendering the bun's crust crispy, with a slightly sweet taste, though a bit on the oily side. 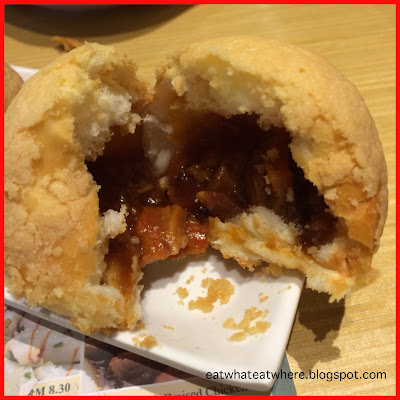 If you check their Facebook, there's a short clip that shows that they piped 'something' on top of their bun. This I believe is what gives it that sweet and flaky crust (obviously butter and sugar were part of that 'something').  The recipe of the absolutely delicious savoury-sweet minced BBQ pork inside was also a notch above the rest. 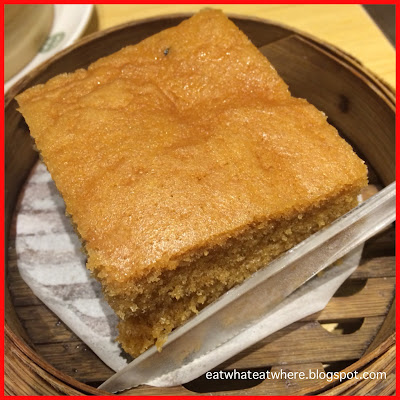 The third item in the 4 Heavenly Kings repertoire is their Steamed Egg Cake @ RM8.30, rather expensive (I must say) for something like a 3-inch square piece of simple cake.  It resembles the "ma lai koh" (Chinese steamed cake) but the texture of this one was incredibly light, airy and fluffy...and, more importantly, not sweet.  This is what I loved most here.....I can certainly eat many pieces of this (but not at that price)! O_o 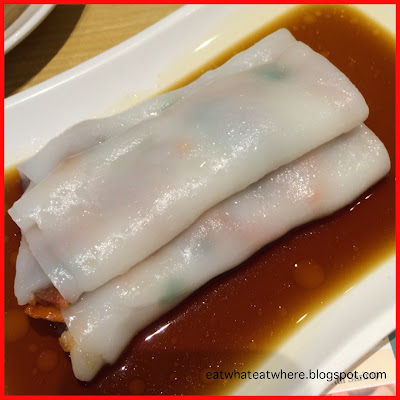 To round up the taste of the 4 Heavenly Kings would be an order of Vermicelli Roll with Pig's Liver but since my family isn't quite into pig's liver, I went with the Vermicelli Roll with BBQ Pork @ RM13.60 instead.  I wasn't particularly fond of the vermicelli roll which wasn't all that thin....and, if you're hoping for some "ma lai chan lat chiew" (cooked chillies with shrimp paste) to go with it, you'll be sorely disappointed coz there isn't any! 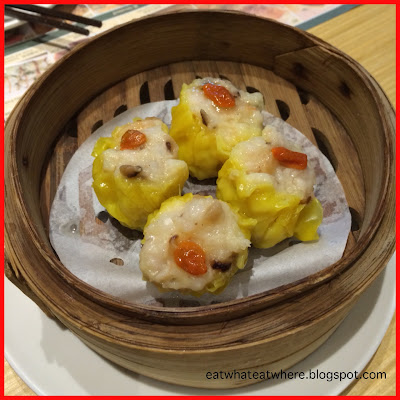 Tim Ho Wan's Pork Dumpling with Shrimp @ RM11.50 is their version of "siew mai" made with a mixture of pork and shrimp.  My mother-in-law liked this very much as it wasn't dense but soft and fresh tasting. 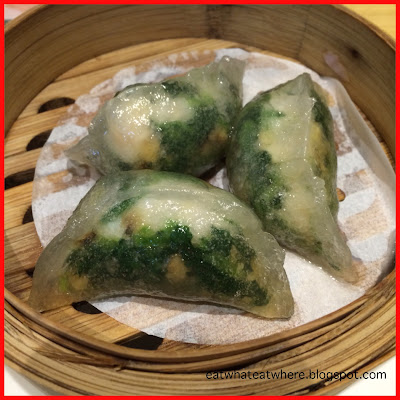 The Steamed Spinach Dumpling with Shrimp @ RM8.30 had a translucent, smooth and delicate skin filled with lots of spinach (and some chopped up shrimps)....good, not great, but an option for spinach lovers for sure! 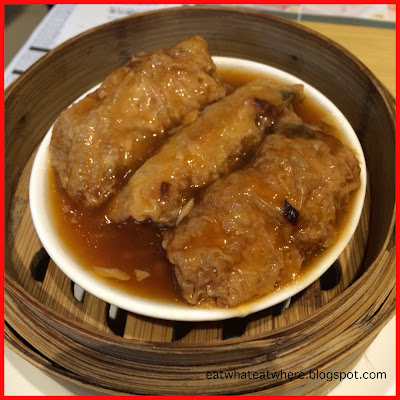 Equally respectable was the Beancurd Skin Roll with Pork & Shrimp @ RM9.30 in a nice and flavourful sauce. 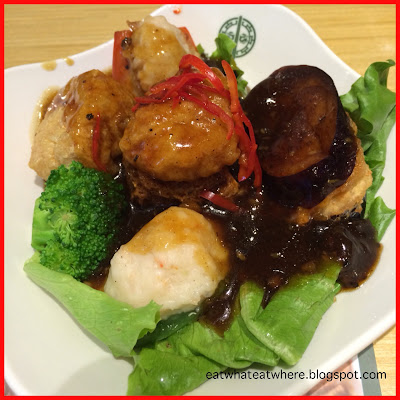 The Signature 5 Treasures @ RM12.50 is their take on yong tau fu basically, with a piece each of green and red bell pepper, eggplant, bean curd puff and deep-fried soft tofu filled with a stuffing of chicken and shrimp, in the chef's signature black bean sauce (with a hint of black pepper).  Decent but not memorable...I've had better (and loads cheaper) dim sum-style yong tau fu.  The standout was the soft tofu with a deep-fried, frizzy and crisp exterior and a very soft centre (something similar to tauhu telur we eat at Indonesian restaurants). 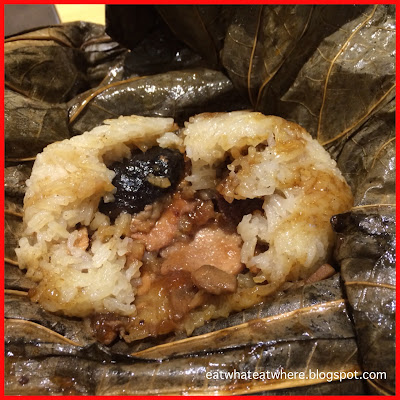 Unveiling the steaming Lotus Leaf Glutinous Rice @ RM13.60 of its fragrant content of immensely soft sticky rice, with its flavourful and tender meat inside (a combination of chicken and pork, I think), the meat was in proper slices and chunks (not minced like the usual versions I've had).  This was very good and I'd rank this as my third most favourite item. 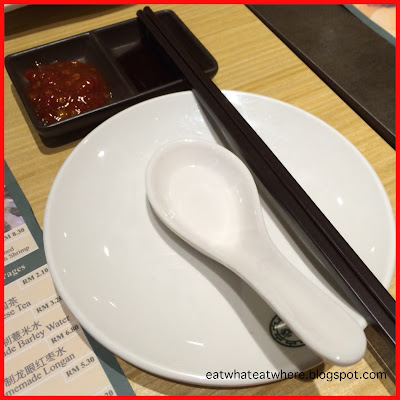 There's no chilli or sweet sauce (like those you'd usually find in dim sum restaurants) to accompany your dim sum.  The only dipping condiments are soya sauce, worchestershire sauce and a sauce made with fermented yellow soybeans and chillies (similar to the one you'd find in Esquire Kitchen).  Not a fan of the sauce...by that, I mean Tim Ho Wan's, not Esquire Kitchen's.

#Side Story:
After the four of us were seated in a table (actually two tables joined together), a staff member came up to us and asked if we could move to another table (she actually said she got a bigger table for us) and pointed to somewhere behind me.  I couldn't see the table then and got up to move over there only to realise it was actually the same sized (two) tables joined together (which my husband already realised before we moved). The staff obviously wanted to move us to accommodate a larger group as there was another (similar) vacant table (that can seat four) next to us.

He reminded me (when we left the place) to write about this as he was clearly not pleased.  If the staff wanted us to move (which, in the first place, they shouldn't do after seating us), she should have been more sincere about it and told us honestly (the reason) and not treat us as if we're so naive or stupid! @_@  If she had asked us nicely if we would mind changing tables and offered the 'real' reason, I don't think we'd be so uncooperative as to not give up the table (though we had every right to say no, of course). 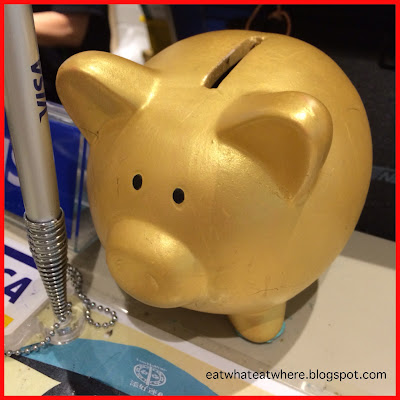 At the end of the day, this tells me only one thing....and that they value making money (cha-ching) more than they value their customers well-being! >.<  This is further demonstrated by how small and cramped the tables are (and the serious lack of table space if you intend to order a lot) and by the 'rushed' service they provide (which could have been better to reflect the higher prices we have to pay).

A plus point for their dim sum is that all of them arrived piping hot, fresh tasting and steamed just right...testimony to the fact that their dim sum is reputedly made to order...and not pre-steamed or left heating in the steamer for prolonged periods.

The use of fresh and quality ingredients certainly upped their taste and flavours...but it also comes at a price...a rather hefty one at that (the cheapest dim sum basket costs more than RM8 with most going for more than RM10).  Be prepared to pay at least RM50 per person (more if you're a big eater) if you want to leave here feeling partially or almost full...anything less and you'll be leaving with a half empty stomach! >.<

Those who like their dim sum with clean, fresh flavours and a more subtle, less robust taste...and who won't mind a very, very limited menu will certainly give Ho Tim Wan their stamp of approval (like my mother-in-law) but my family wasn't sold.  I was ok with it and my ultimate favourites were the Steamed Egg Cake and Baked Bun with BBQ Pork...these are worth lining up for...then again, you may not have to....just walk in and pack these two famed items to go (and eat them as soon as you get your hands on them).

Overall, the dim sum taste was more than pleasant with some unique dim sum on offer...yet I don't find myself yearning to return because the hurried, hectic and noisy dining experience isn't what I would term as a laid-back yum cha experience.  Maybe I'm just a traditionalist who prefer servers passing me by with their steamed (and fried) trolleys offering an insane variety of dim sum (I may not eat them all but I like the idea of variety) and sipping copious amounts of Chinese tea with family or friends in a large, spacious round table! ;D

Email ThisBlogThis!Share to TwitterShare to FacebookShare to Pinterest
Labels: Another One Bites the Dust (aka Closed), Dim Sum, Food: Chinese, Location: Mid Valley