After a more than pleasurable brunch at Fork D World and our caffeine intake taken care of at Beam, we still had a bit of time on our hands before going our separate ways for dinner.  So, to keep our budget for the day in check, we thought we'd go for some (cheap) ice cream! ;) 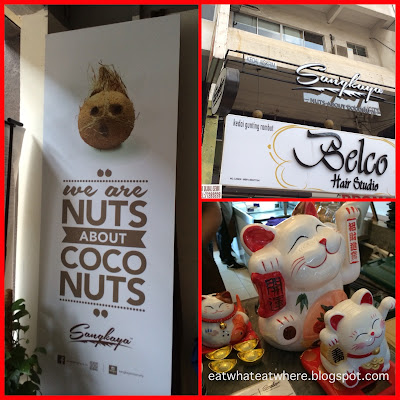 We landed ourselves at Sangkaya @ Damansara Uptown which is, of course, well known for its premium coconut ice cream.  This franchise seems to be opening up everywhere these days.  [#Note: I read in the papers (themalaymailonline) that the owners actually got into this business of coconut ice cream by chance when their plan was actually to open a place selling bread and kaya (coconut jam) but later realised that the market for that was too competitive (and, along the way, they researched about the coconut which is one of the ingredients of kaya).  So, I'm not sure if the name has anything to do with their intention to be in the "kaya" business or that they stuck with the name because it also means "rich" (or "a rich person") which is what they'll be when their business succeeds.] 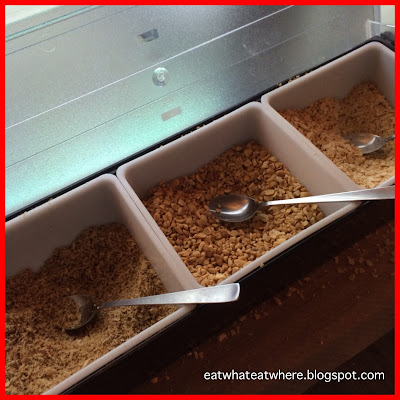 Here are the available toppings for your ice cream....roasted coconut flakes, roasted peanuts and nestum cereal. 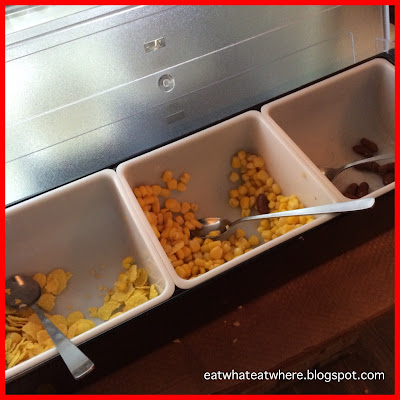 Also available......cornflakes, sweet corn and kidney beans (that needs refilling asap...it's so bare or is it their ploy to keep us from taking too much.....hee...hee)! 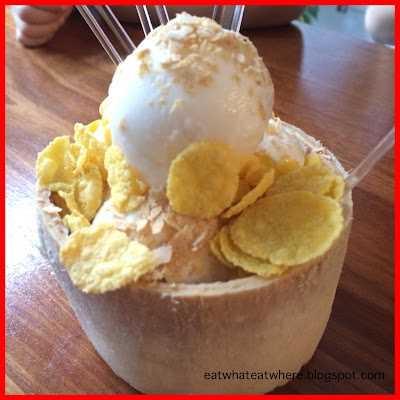 I ordered the Signature @ RM10.50 with 4 scoops of ice cream and 3 toppings served in a fresh coconut husk.  It also comes in Cup (with 3 scoops and 1 topping @ RM7.30) or Cone (with just one scoop @ RM3.10).  Selected toppings were cornflakes, sweet corn and cereal.  When you get to the bottom of the ice cream, you'll find pieces of fresh coconut flesh as well....yum!  Just know that the 4 scoops of ice cream ain't very big...it just looks huge in photos only because of the close up shot! :D 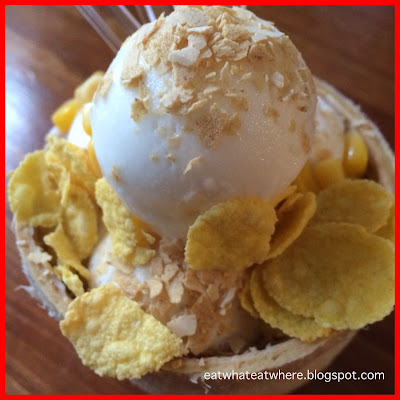 The ice cream had a nice, clean taste with a good enough (but not intense) coconut fragrance...just not as creamy as other ice creams (since no dairy is involved in the making as it's made with undiluted fresh coconut milk (but suitable for vegans since it's dairy-free).  It's smooth and refreshing, with its natural coconut sweetness, but probably not for those who like their ice creams really creamy).  Though some in my eating party did mention that it was not as good as the ones they ate in Bangkok (well, I wouldn't know since I've not eaten it there before). 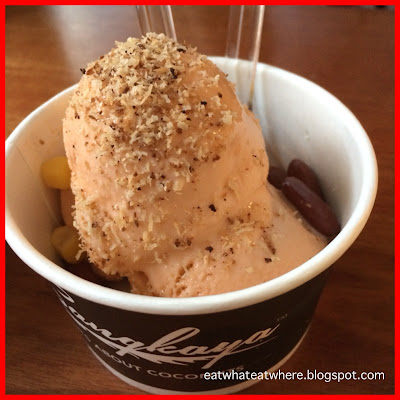 Sangkaya now also serves the Thai milk tea infused ice cream.  This is the 'Cha Yen' Cup @ RM7.30 (with one topping) which comes with three scoops of Thai milk tea infused ice cream (RM3.10 for one scoop on a classic waffle cone).  I actually forgot about the one topping limit and accidentally put in three...kidney beans, sweet corn and roasted coconut flakes....oops!  Anyway, what's with the toppings limit....tsk...tsk!  We should be allowed to put whatever topping we want, after all, we won't be putting in too much so that the ice cream can still shine ;) 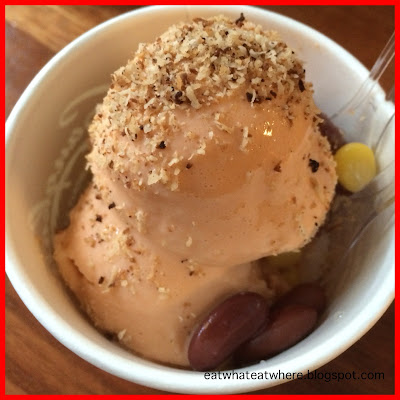 This 'cha yen' flavoured ice cream, I didn't like.  It did taste like Thai iced milk tea but, for me, it should be left as it is.....a drink! 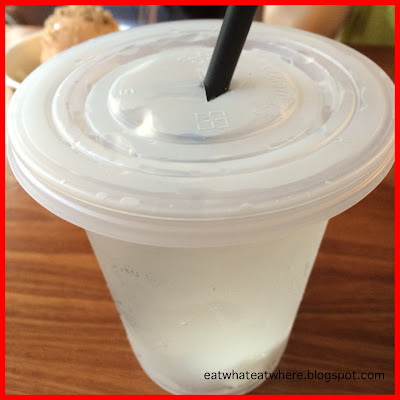 I also got a glass of their all-natural Coconut Water @ RM5.20 with no added sugar.  It was naturally sweet with an intense coconut flavour and tasted exactly like the Thai fragrant coconuts that I buy to drink and make jellies.  They also have the Coconut Shake which is made up of fragrant coconut water blended in ice with coconut flesh and topped with a scoop of their premium coconut ice cream which we didn't try.

If you have a weakness for all things coconut, then you're bound to enjoy this freshly churned ice cream.  It makes for a very refreshing treat on a hot day, that's for sure, but I'll stick with just the coconut ice cream flavour here though.

A word of advice, eat it fast as it melts rather quickly!

Email ThisBlogThis!Share to TwitterShare to FacebookShare to Pinterest
Labels: Another One Bites the Dust (aka Closed), Location: Damansara Uptown, Sweet Indulgence